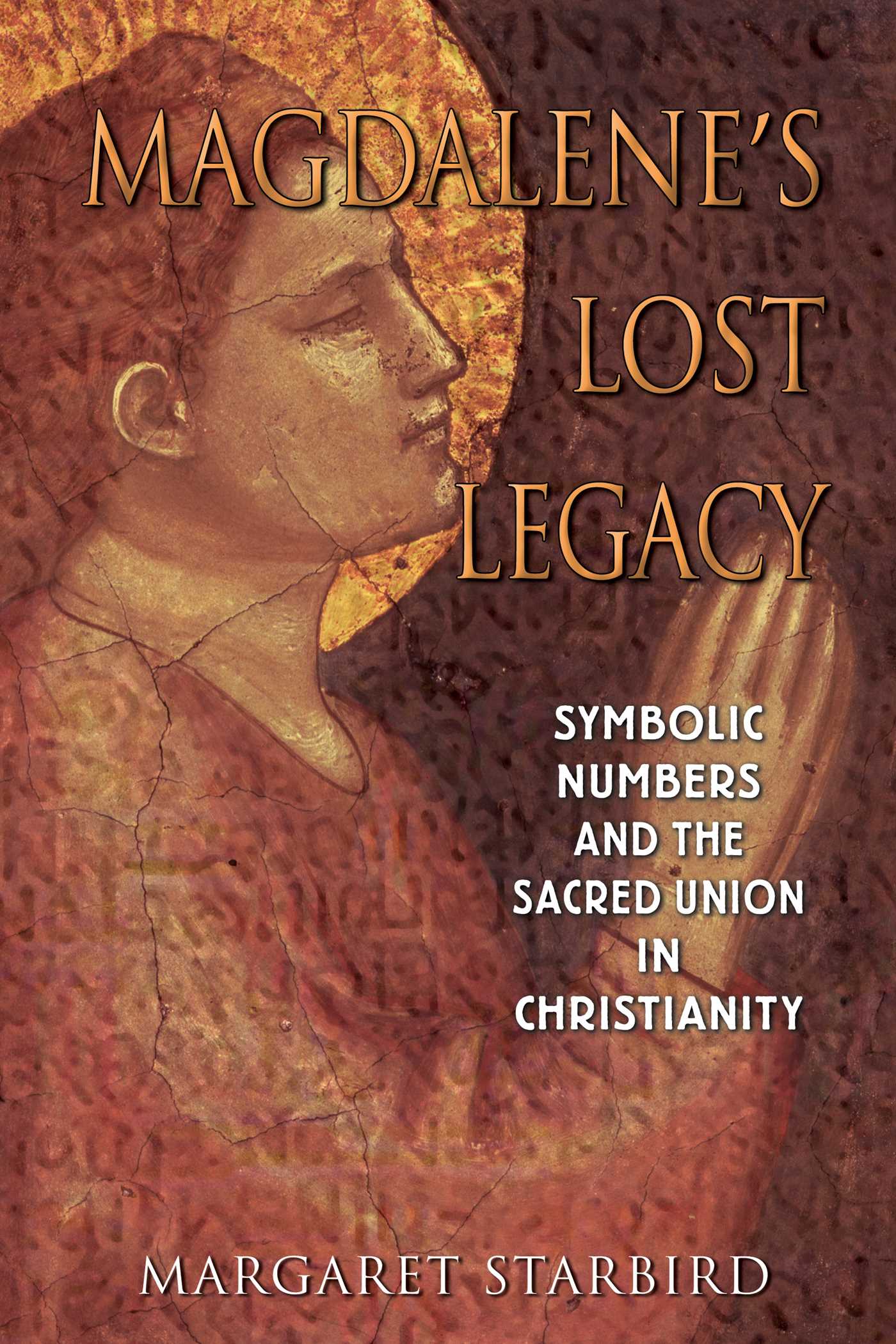 In Magdalene’s Lost Legacy, author Margaret Starbird decodes the symbolic numbers embedded in the original Greek phrases of the New Testament--revealing the powerful presence of the feminine divine.

The New Testament contains wide use of gematria, a literary device that allows the sums of certain phrases to produce sacred numbers. Exploring the hidden meanings behind these numbers, Starbird reveals that the union between Jesus and his bride, Mary Magdalene, formed a sacred partnership that was the cornerstone of the earliest Christian community.

Magdalene’s Lost Legacy demonstrates how the crucial teaching of the sacred marriage that unites masculine and feminine principles--the heiros gamos--is the partnership model for life on our planet and the ultimate blueprint for civilization. Starbird’s research challenges the concept that Christ was celibate and establishes Mary Magdalene as the human incarnation of the sacred bride. The author also explains the true meaning of the “666” prophesied in the Book of Revelation. Through this potent reclaiming of the lost legacy of Mary Magdalene, Margaret Starbird offers the opportunity to restore the divine feminine to her rightful role as bride, beloved, and sacred partner.

THE FIRST ELEMENTS OF GEOMETRY

Tons Brunés has offered an interesting explanation that relates to the heavenly properties of seven and to its associations with the Goddess and the moon, showing how the menstrual feminine (lunar) cycle of twenty-eight days related to the basic human digits. According to his analysis, the first numbers used by human beings were the numbers one to twenty, corresponding to fingers and toes. Units of measurement were in all likelihood as simple as a man’s foot, his stride, and his thumb joint. A fathom, the length between his fingertips with his arms outstretched, was six feet. Because the size of a typical man’s foot does not vary widely from one culture to another, the basic measurements of the ancient civilizations Egypt, Greece, and Rome were very similar. For example, a Greek foot measures 1.008 of an English foot. The basic assumptions concerning the origins of measurement hypothesized by Tons Brunés are confirmed by archaeological evidence.

Brunés postulates that the first symbol used by our ancestors was most probably the circle, the “sun” symbol ubiquitous across the globe. He suggests that the radius of the circle measured 5, the number of digits on a human hand. As shown in figure 2.2, when a circle having a diameter of 10 units is divided into quarters by a cross through the center, each arm of the cross measures 5 units, and the chord drawn between two of the arms (the hypotenuse of each of the four right triangles formed) measures only slightly more than 7 units (approximating the square root of 50).

This original division of the circle into quarters reflected the actual phases of the moon in its seven-day intervals, and the lunar month of twenty-eight days that governs the menstrual flow of women can similarly be divided into four equal segments of seven days each. Thus, the association of the number seven with the sacred feminine and the lunar aspects of “virgin” and the moon goddess is reinforced. Brunés suggests that this elementary mathematical discovery was probably the foundation of all later inventions and may lie at the root of the cyclical symbolism of the number seven among ancient peoples who adopted a week of seven days reflected in the Book of Genesis: “So God blessed the seventh day and made it holy” (Gen. 2:3).

To the naked eye of our remote ancestors, only seven luminous bodies were visible in the heavens--the sun and moon and five planets. Pythagoras named seven tones on the musical scale, and later seven liberal arts were identified. Seven wonders of the world were praised, seven chakras proclaimed, and seven demons typically expelled.

In Hebrew law and scriptures, seven was the sacred number of completeness of a time cycle. The people of the covenant worshiped Yahweh, their unseen deity, on the Sabbath, the seventh day, which was marked as a day of rest. By analogy, it took Solomon seven years to complete the Temple in Jerusalem. Many Jewish festivals were celebrated for a period of seven days, and seven weeks occurred between the feast of the unleavened bread (Passover) and the feast of the leavened bread (Pentecost). This latter feast was begun on the fiftieth day, the “jubilee day” after the elapse of “a week of weeks” (7 x 7 days = 49 days plus one added day--the fiftieth day celebrated as the “jubilee”).

In the Book of Leviticus we find a command of Yahweh to Moses concerning the land: “When you enter the land that I am giving to you, let the land, too, keep a Sabbath for the Lord. For six years you may sow your field and for six years prune your vineyard . . . but during the seventh year the land shall have a complete rest” (Lev. 2-4). In Israel a field was cultivated for six years and allowed by law to lie fallow during the seventh--which was called the “sabbatical year.” A cycle of seven “sabbatical” years--a total cycle of forty-nine years--was followed in Israel by a fiftieth year when no work was done, no fields planted. It was to be a “jubilee” year of thanksgiving and merrymaking to honor the gracious bounty of God. In this fiftieth year, all slaves were to be set free, all debts forgiven, all grudges forgotten, and the slate rubbed clean so that in the fifty-first year a whole new cycle could commence: “This fiftieth year you shall make sacred by proclaiming liberty in the land of all its inhabitants . . . you shall not sow nor shall you reap the aftergrowth” (Lev. 25:10-11).

Some of these uses of the number seven are familiar--the feasts of Easter and Pentecost in the Christian calendar are derived from the great harvest feasts of the leavened and unleavened bread from the Jewish calendar, hence the fifty days separating the two holy days. In medieval times, an apprentice served his artisan master for seven years and then continued to serve as a journeyman for another seven before himself becoming a master. Other familiar uses of seven-year periods are found in the term of servitude of indentured servants and the “sabbatical” leave of professors, a period allowing them to “lie fallow.” Even today children “come of age” at twenty-one after three complete cycles of seven years.

Seven saw a time cycle completed, but it was also the number of eternity and of spiritual completeness or perfection. In Greek tradition it was the virgin number associated with Pallas Athene and Holy Wisdom, while in Christian tradition it is the number often associated with the Holy Spirit, whose gifts are sevenfold. There are seven spiritual works of mercy and seven cardinal sins. Jesus said we should forgive not seven times, but seventy times seven!
Margaret Starbird

Roman Catholic scholar Margaret Starbird’s extensive study of history, symbolism, medieval art, mythology, psychology, and the Bible uncovers new and compelling evidence that Jesus Christ was married to Mary Magdalen. Starbird’s investigation of this suppressed history calls for a restoration of the feminine principle to its intended place in the canon of Christianity.

"Recommended for academic libraries serving women's studies programs and for public libraries where patrons are interested in Christian women throughout the ages."

"Through her decoding, Starbird reveals the powerful presence of the feminine divinity in religion where it has been almost erased."

"Margaret Starbird's work is of particular interest to me because it fuses the diverse fields of symbolism, mythology, art, heraldry, psychology, and gospel history. Her research opens doors for each of us to further explore the rich iconography of our own spiritual history."

"Margaret Starbird fearlessly explores the symbols and the hidden clues within the scriptures of the sacred union. . . . Starbird writes eloguently and convincingly, laying the facts before us and allowing us to come to our own conclusions about these wonderful and secret teachings."