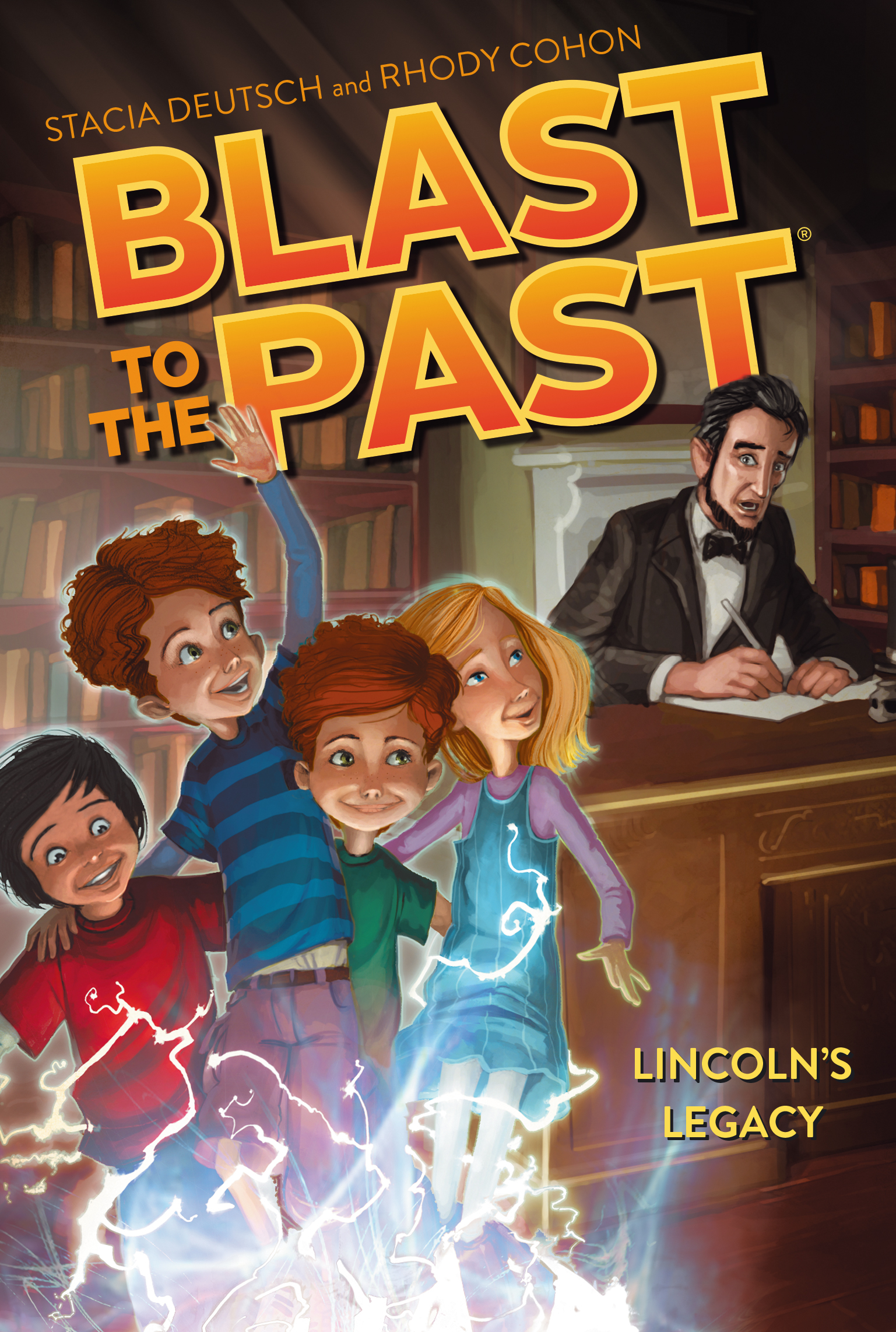 Book #1 of Blast to the Past
By Stacia Deutsch and Rhody Cohon
Illustrated by David Wenzel
LIST PRICE $6.99
PRICE MAY VARY BY RETAILER

Can Abigail and her classmates jump into the past and convince President Lincoln to write the Emancipation Proclamation? Book one in an action-packed time-travel series.

“What if Abraham Lincoln never freed the slaves?” That’s the question Mr. Caruthers poses to his third grade history class. And the question takes on real-life importance for Abigail, Zack, Jacob, and Bo, because Mr. Caruthers wants them to travel back in time and convince President Lincoln to write the Emancipation Proclamation. Lincoln is discouraged and thinking of quitting—before slavery is abolished!

With a time-travel gadget and only two hours to spare, Abigail and her friends are going back to the past. But even though time travel isn’t hard, convincing Abraham Lincoln not to give up isn’t going to be easy…

Tuesday, Wednesday, Thursday, and Friday, he’d be waiting in the classroom before the bell rang. But never on Monday. There was something strange about Mondays.

And today was Monday.

When I entered the classroom, Maxine Wilson was already sitting at her table.

“Hey, Abigail,” she greeted me. I always liked Maxine. We’d known each other since kindergarten.

“I’m always ready on Mondays.” Maxine had a stopwatch.

The school bell was the signal.

Maxine pressed the little black button on her watch. “Go!” she shouted, and we all rushed to our seats.

Everyone sat silently, staring at the classroom door. No one dared look away. Not even for a second.

“I’m sorry I’m late,” Mr. Caruthers apologized as he entered the classroom. We waited patiently while Mr. Caruthers straightened his crumpled suit jacket. Retied his bow tie. Combed his hair. And finally, pushed up his glasses.

“Abigail,” Jacob whispered, leaning over to me. “What do you think his question will be today?”

I shrugged and said softly, “I have no idea.”

Jacob turned to ask his brother Zack the same thing. Jacob and Zack were twins. They lived next door to me. And they were my table partners. Zack said he didn’t know either. A new kid named Roberto Rodriguez also sat at our table. But he didn’t talk much, so Jacob didn’t bother to ask him.

Mr. C finished straightening his clothes and leaned back on the edge of his desk. He was too cool to sit in a chair like other teachers.

“What if,” he began, and then paused. I sat up a little straighter. Every Monday, Mr. Caruthers asked us a new “what if” question. So far, my favorite questions were “What if Thomas Edison had quit and never invented the lightbulb?” and “What if Clara Barton had quit and never started the American Red Cross?”

I loved thinking up answers to Mr. C’s questions. And I couldn’t wait for this one.

Mr. C leaned back farther on his desk and finished his question. “What if Abraham Lincoln quit and never issued the Emancipation Proclamation?”

My hand shot up in the air. I didn’t even wait for him to call on me. “What’s the Emancipation Proclamation?” I blurted out. “Why’s it so important?”

“Be patient, Abigail,” Mr. Caruthers said slowly. “All your questions will be answered in good time.”

“But—,” I began. Mr. Caruthers looked at me over the top of his glasses. I put my hand down. It’s really hard to wait when you are as curious as I am.

I really wanted to raise my hand again. He hadn’t gotten to the Emancipation Proclamation part of the story yet. Struggling to keep quiet, I tucked my fingers under my legs and sat on them.

David Thorn Wenzel has been part of the fantasy art movement since the 1970s when Middle Earth: The World of Tolkien Illustrated was released. He has continued to work on fantasy projects in the children’s book, trade book, and graphic novel markets throughout his career.  Illustrations from his 1980s book, Kingdom of the Dwarfs as well as the cover art of The Hobbit, are in the permanent collection of the New Britain Museum of American Art. Wenzel began his career working for Marvel and DC comics, working on The Avengers and Savage Sword of Conan. Other notable titles include the graphic novel of The Hobbit and The Wizard’s Tale. Over the course of his career, he has also illustrated numerous children’s books including Rudolph the Red-Nosed Reindeer, The Book of Kringle: Legend of the North Pole, and The King of Little Things. David lives in Connecticut where his studio overlooks a picturesque landscape of green farm fields and a winding brook. His entire family is involved in the arts. His wife Janice is an artist and teacher, and their two sons, Brendan (They All Saw A Cat, Hello Hello, A Stone Sat Still) and Christopher, are both visual artists. Greg Wenzel, David’s brother, is an author and illustrator (Giant Dinosaurs of the Jurassic).

Book #1 of Blast to the Past
By Stacia Deutsch and Rhody Cohon
Illustrated by David Wenzel
LIST PRICE $6.99
PRICE MAY VARY BY RETAILER