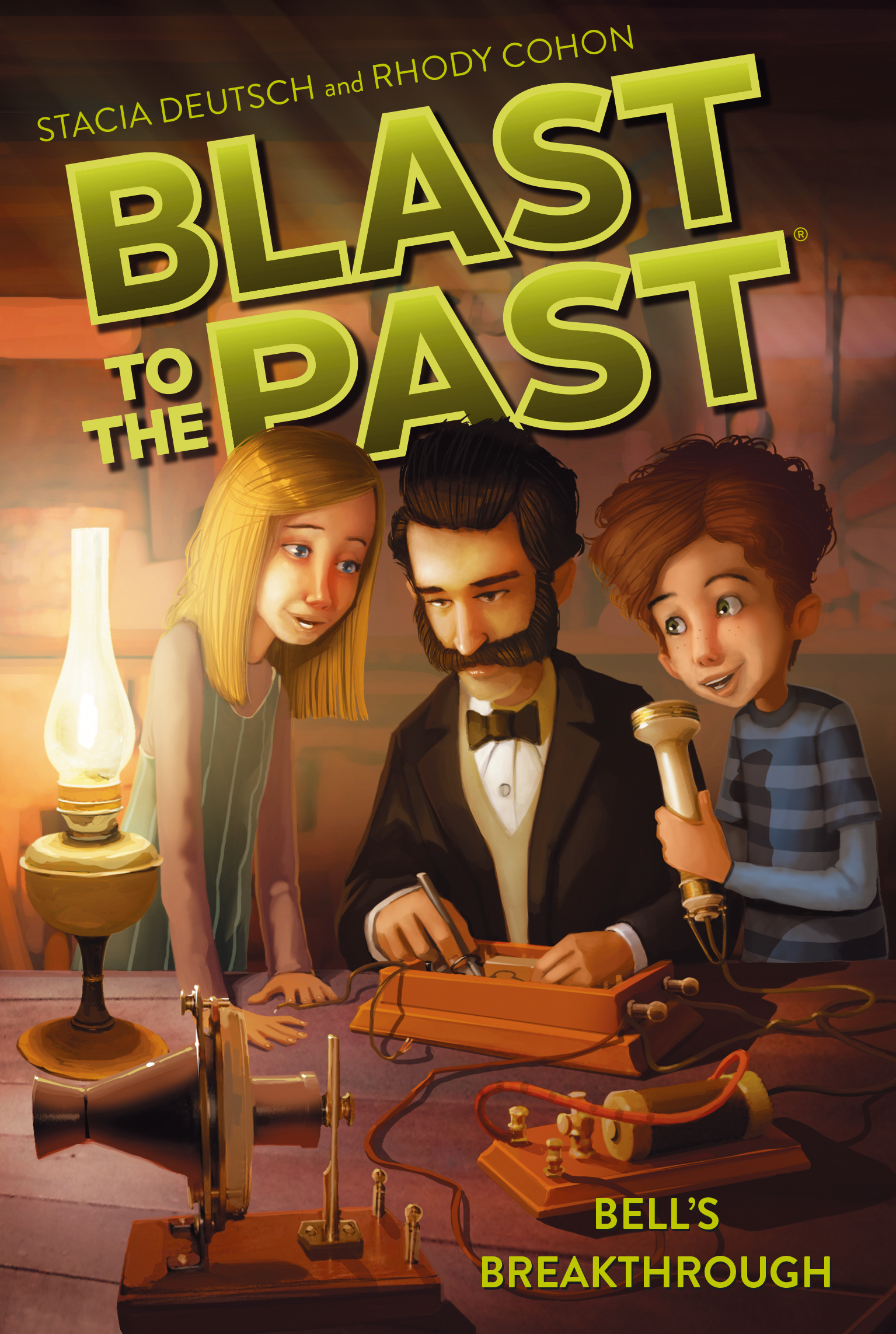 Book #3 of Blast to the Past
By Stacia Deutsch and Rhody Cohon
Illustrated by David Wenzel
LIST PRICE $6.99
PRICE MAY VARY BY RETAILER

What if there were no telephones? That won’t happen if Abigail and her classmates blast into the past and persuade Alexander Graham Bell not to give up on his invention!

Abigail is getting restless. It’s been three weeks and she hasn't time traveled once! Luckily it’s Monday again, so when Mr. Caruthers asks the class, “What if Alexander Graham Bell quit and never invented the telephone?” Abigail knows it’s time to go back to the past—this time, to 1876!

But when the kids find Professor Bell, he has given up on the telephone. In fact, he is hard at work on a new invention! Abigail and her friends have to get him back on track, but can they make a connection with the most stubborn inventor they’ve ever met?

“Mr. Caruthers?” I was surprised to see my teacher sitting at his desk. Our teacher was always late to class on Mondays. And he usually sat on his desk, never behind it.

I popped my head back into the hallway. The sign on the door read ROOM 305.

There was no mistake. I was definitely in the right place.

Something weird was going on.

“Good morning, Zack and Jacob,” Mr. Caruthers greeted the twins as they entered behind me.

“Huh?” Zack said, staring blankly at our teacher. He was confused too.

We hurried to our table. Zack, Jacob, and I sit with a new kid named Roberto Rodriguez. Maybe he knew what was up.

Bo answered in a voice so soft, I could barely hear him. “I was the first one to class. When I saw him at his desk, I thought I was in the wrong room. I almost left.” Bo was so quiet and shy, it wasn’t hard to imagine him leaving the classroom and running away. He doesn’t like talking to grown-ups. I was actually kind of surprised he stayed. He must really like social studies. Or Mr. C.

“I did the same thing,” I said. I pulled out my chair and sat down.

It was totally strange.

Every Monday, Mr. Caruthers was five minutes late to class.

Every Monday, his clothes were wrinkled and messy.

Every Monday, his glasses sat way down on his nose. And his hair stuck up, way up to the sky.

But today, he was on time. His suit was neat. His tie was tied. His glasses were where they were supposed to be. Even his hair was combed.

And he was sitting in his chair!

“Is it really Monday?” I asked Zack.

“I think so,” Zack answered. “Do you think this has something to do with T.T.?”

Zack leaned over and put his hand around my ear. “Time travel,” he whispered.

I didn’t say anything. I just winked one eye and nodded.

Bo, Jacob, Zack, and I knew the secret reason why Mr. C was messy and late on Mondays.

Mr. C was an inventor. In his private, hidden laboratory under the school, Mr. C had created a time-travel computer. It looked like a handheld video game, but when he put a special cartridge in the back, a smoky, green, glowing time-travel hole opened in the floor.

He was always messy because when he made the cartridge there was a wicked explosion. The time-travel cartridge didn’t work without the explosion.

We knew his secrets because Jacob, Zack, Bo, and I were Mr. C’s helpers.

Mr. C wanted more time to focus on his new invention, so he asked us to time-travel for him. He explained to us that American history was in danger. He showed us a little black book full of names. For some mysterious reason, all the famous Americans on Mr. C’s list were quitting. They weren’t inventing, or speaking out, or fighting for what was right. They were giving up on their dreams!

Our mission was to save history from changing forever!

We time-traveled on Mondays during the after-school club time.

So far, we’d been very successful in our adventures. We’d managed to keep history on track—no small thing, since the computer only gives us two hours to get the job done.

We didn’t know what would happen if we went over the two-hour limit. And we didn’t want to know. The time-travel computer might have a freak-out. And if we weren’t home by the end of club time, so would our parents. That is why we had to hustle and be careful about how much time we spent in the past.

Every Monday, we crossed our fingers and hoped that Mr. Caruthers would send us on another adventure. But lately, instead of T.T., Mr. C kept sending us to the library! The past two Monday afternoons, we’d been sitting around, reading boring books about Alexander Graham Bell.

The bell rang. It was time for class to start.

Mr. Caruthers stood up from his chair. He cleared his throat and asked, “What if Alexander Graham Bell had quit and never invented the telephone?” Our whole class loved Mr. C’s “what if?” questions. He asked them every Monday.

I looked over at the boys. I wanted to ask them if they thought the Alexander Graham Bell question might be a sign. I stared at Jacob. He didn’t look at me. Then I stared at Bo. He wasn’t looking at me either. So I tried staring at the side of Zack’s head until my eyes hurt.

I decided to forget about T.T. for a little while too. I raised my hand because I knew what my life would be like if Alexander Graham Bell had never invented the telephone.

I wanted to tell Mr. C how horrible it would be if there were no telephones. The world would feel so big and disconnected.

Without telephones, my whole life would be spent waiting around. I’m definitely not good at waiting. In fact, I am probably the most impatient person in the whole entire universe.
Stacia Deutsch

David Thorn Wenzel has been part of the fantasy art movement since the 1970s when Middle Earth: The World of Tolkien Illustrated was released. He has continued to work on fantasy projects in the children’s book, trade book, and graphic novel markets throughout his career.  Illustrations from his 1980s book, Kingdom of the Dwarfs as well as the cover art of The Hobbit, are in the permanent collection of the New Britain Museum of American Art. Wenzel began his career working for Marvel and DC comics, working on The Avengers and Savage Sword of Conan. Other notable titles include the graphic novel of The Hobbit and The Wizard’s Tale. Over the course of his career, he has also illustrated numerous children’s books including Rudolph the Red-Nosed Reindeer, The Book of Kringle: Legend of the North Pole, and The King of Little Things. David lives in Connecticut where his studio overlooks a picturesque landscape of green farm fields and a winding brook. His entire family is involved in the arts. His wife Janice is an artist and teacher, and their two sons, Brendan (They All Saw A Cat, Hello Hello, A Stone Sat Still) and Christopher, are both visual artists. Greg Wenzel, David’s brother, is an author and illustrator (Giant Dinosaurs of the Jurassic).

Book #3 of Blast to the Past
By Stacia Deutsch and Rhody Cohon
Illustrated by David Wenzel
LIST PRICE $6.99
PRICE MAY VARY BY RETAILER