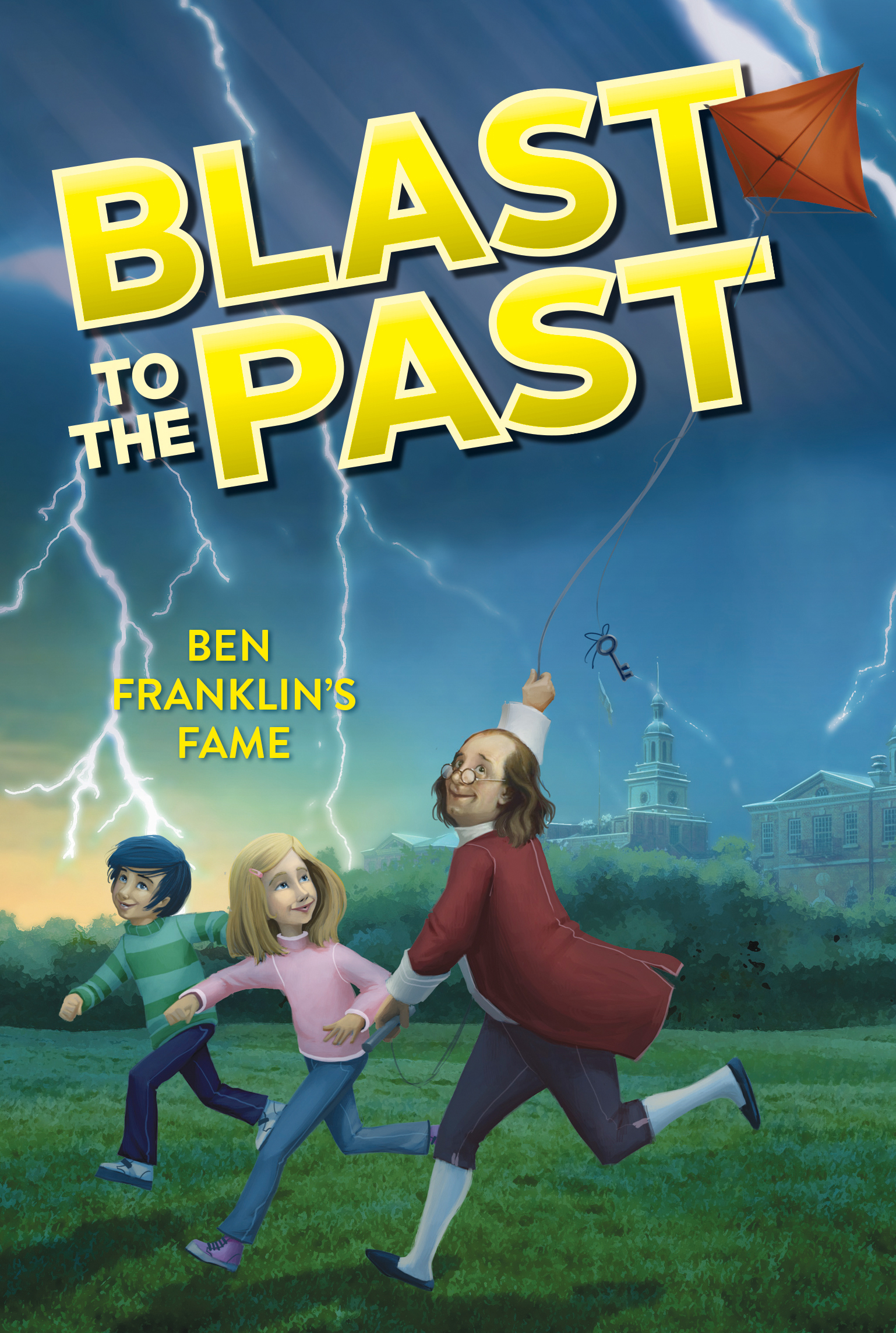 Book #6 of Blast to the Past
By Stacia Deutsch and Rhody Cohon
Illustrated by Guy Francis
LIST PRICE $6.99
PRICE MAY VARY BY RETAILER

Abigail and her friends can’t believe it—Babs Magee has finally convinced someone to quit, and that someone is Benjamin Franklin! Not only is he an important Founding Father, he invented the lightning rod, bifocals, and more. Babs is making a terrible mess of history, and it’s up to the third-grade time travelers to put things right.

But no matter how far back the kids go, Babs is always one step ahead of them. Will they be able to find Ben and stop Babs in time to save history?

Ben Franklin’s Fame Monday
“We are going to learn about one of the most famous people in American history.” Mr. Caruthers, the most amazing teacher on planet Earth, leaned back on the edge of his desk and folded his arms across his chest.

It was 8:05 and Mr. C had just arrived in class. Every Monday Mr. C is late. And totally messy. Today his hair was sticking up. His suit was a crumpled disaster. And his glasses were falling off his nose.

Mr. C didn’t seem to notice his appearance. Or maybe he didn’t care. It is part of what made him so cool. Mr. C is super smart and also a little absent-minded.

Why Mr. C doesn’t make the cartridges on a different day, or get up early enough to shower and change clothes afterward, I’ll never know. Maybe, like doughnuts, time-travel cartridges are better fresh.

“This American is so famous, everyone recognizes his name,” Mr. C said as he pushed up his glasses. “We’ll be studying his accomplishments all week.”

Usually, whoever Mr. C talks about in class is the same person we visit after school. Of all the kids in the third grade, Mr. C chose just Jacob, Zack, Bo, and me for History Club. The four of us are table partners and we take the responsibility very seriously.

“Who do you think we’ll meet today?” I leaned over and whispered to Zack while Mr. C paused to straighten his tie and run his fingers through his hair.

“Hmm,” Zack wondered aloud. “Someone so famous, we can talk about him all week . . . Maybe Elvis Presley?” He played a little air guitar and wiggled his knee under the table. “Wouldn’t it be rockin’ to visit the King?”

“Groovy,” I said with a laugh. Zack is the funniest guy I know. And, yeah, it would be cool to visit Elvis, but I didn’t think that’s who we were studying today.

I looked past Zack to his twin brother Jacob.

Jacob and Zack might look the same, but their personalities are totally opposite. Jacob is neat and clean and organized, whereas Zack is always a wreck.

Today Zack was wearing jeans and a T-shirt, with parts of his breakfast on the front. I could easily recognize syrup and chocolate milk.

“Who do you think Mr. C’s talking about?” I asked Jacob.

“Bill Gates would be my guess,” Jacob replied. “He’s ‘the father of modern computing,’ you know.” Jacob was wearing khaki pants and a T-shirt with a computer on the front. He really likes computers.

It was a good idea, but usually we only visit people who have been dead a long time. As far as I know, Bill Gates lives in Seattle.

Bo was sitting the farthest away from me at our table. He was wearing sweatpants and a long-sleeved gray sweatshirt. Bo’s real name is Roberto, but we call him Bo for short. I would have asked him who he thought it was, but Mr. C had cleaned himself up and was now pacing in front of the room, lecturing as he walked.

“The man we will be learning about was an inventor, politician, soldier, statesman, poet, ambassador, shopkeeper, bookseller, printer.” Mr. C stopped to catch his breath before adding, “Cartoonist, scientist, journalist, chess player, weight lifter, and he loved to read, too.”

Now I was certain it wasn’t Elvis or Bill Gates.

“Please get your textbooks,” Mr. C instructed. There was a rustling of papers as we all rushed to pull our books out from the little shelves under our desks.

When we were ready, Mr. C said, “Turn to page one-forty-four.” He paused, giving us just enough time to find the page number. “There, in the middle of the page, is a picture of an American legend: our famous forefather, Benjamin Franklin.”

Mr. C started searching for the correct page in his teacher’s guide, when Maxine Wilson’s hand flew up in the air. “Excuse me, Mr. C,” she interrupted. “There’s no picture of Ben Franklin in my book.”

Hands were popping up all over the classroom. Everyone was reporting the same thing: Ben Franklin was not in our textbooks.

Mr. C looked down at his teacher’s guide. He had a confused look on his face. I could tell that Ben Franklin wasn’t in there either.

Khoi Nguyen raised his hand and then informed him, “There’s a painting of some woman in the middle of page one-forty-four.”

“That’s odd,” Mr. C said as he stood tall and slowly wandered toward Khoi’s desk. “Just yesterday I reviewed my notes for this morning’s class.” Mr. C scratched his head, then pushed up his glasses. He glanced down at Khoi’s book. “I am certain that Ben Franklin is on page one-forty-four.”

I looked at my own page 144. I checked the number. And then double-checked.

It was true. Ben Franklin wasn’t there. I studied the painting of the woman. The small sketch was blurry.

In the drawing, the lady’s face was half covered by a floppy hat. She was standing next to an old-fashioned printing press, showing a printed document to two men. The woman looked sort of familiar, but I didn’t know from where.

I gave up trying to place the woman’s face. I turned a few pages in the book to see if Ben Franklin was on page 145 or 244. Knowing Mr. C, it was possible that he wasn’t remembering correctly.

Bo, Zack, and Jacob flipped through their books also. We were all looking for Ben Franklin.

Bo loves to read. He’s the newest member of our class. The first thing I found out about him was that he reads everything and remembers everything he’s ever read.

“Something isn’t right,” Bo said, rubbing his chin. The second thing I learned about him was that Bo always rubs his chin when he’s thinking hard.

Turning to the index in the back of the book, Bo ran one finger down the names, then reported to us, “There’s no Ben Franklin in our American history books at all.”

One more thing about Bo is that he is shy. Especially around adults. There was no way he was going to announce his discovery to our teacher. But I’m bold and never shy. So I decided to tell Mr. C myself.

I raised my hand and held it there for a second. But when Mr. C didn’t call on me immediately, I lowered it again. A thought was trying to break through into my brain.

I looked again at page 144. This time I studied the picture. I read the words under the drawing. When I realized the truth, I raised my hand so fast, the motion shot me up and out of my chair.

“Mr. C!” I called across the room. He’d given up trying to find Ben Franklin in Khoi’s book and for some reason was flipping through the pages of Cindy Cho’s history book. I guess he thought the two books were different.

“Be patient, Abigail,” he said as he licked his finger and sped through the pages.

I heard Zack laugh and say, “That’s like telling an elephant to tiptoe.” Zack was being goofy, but he was right. I’m never patient. I try, but it’s just too hard.

I was standing near my desk, bouncing on my toes, holding one hand up above my head, waiting for Mr. C to call on me.

While I waited, I happened to look down at Bo. He was carefully reading page 144. His eyes went big like a UFO when he also realized what was going on.

Jacob and Zack were still skimming through their own books searching for Ben Franklin.

“He’s not in there,” I told them, dropping my hand and coming around the table. I turned Zack’s book back to page 144 and placed the textbook between them so they could view the page together.
Stacia Deutsch

Guy Francis was born and raised in Provo, Utah. He lived in the city but was raised on a farm. As a child, he spent many summers working and playing on his family ranch, where he and his dad, brothers designed and built a cabin. Now, it’s a place they all go to relax. Guy began illustrating at the age of nine. His first projects included his 4th grade bulletin board and numerous cartoon characters commissioned by his friends for 25¢. It wasn’t until high school that Guy realized a person could make a living being an artist, and while attending Brigham Young University, he got his first children’s picture book job illustrating Showdown at Slickrock by Pat Bagley. Since then, he has published a variety of work including book covers, children’s games, early chapter books, and picture books. He is thrilled to be making a living doing what he loves. Guy has always liked building, fixing, or creating things. His current projects range from fixing up his rusty old ‘46 Chevy pickup truck to remodeling a studio in his home. Guy also enjoys his model trains, flying RC airplanes, camping, and rock climbing. His wife, Lorien, and their four children, Calvin, Samantha, Madeline, and Max, are pretty good art critics and often visit the studio in his home to help out.

Book #6 of Blast to the Past
By Stacia Deutsch and Rhody Cohon
Illustrated by Guy Francis
LIST PRICE $6.99
PRICE MAY VARY BY RETAILER