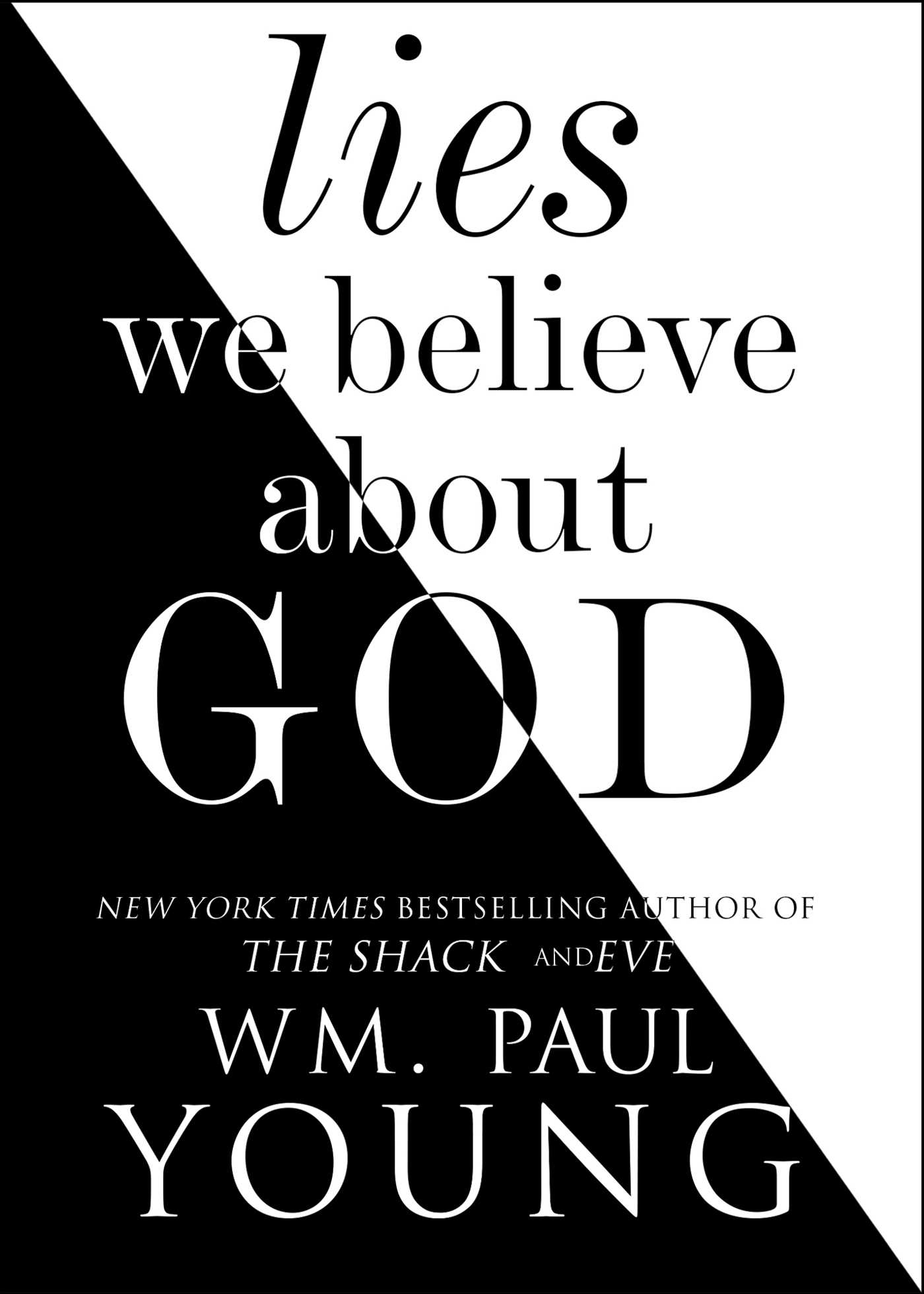 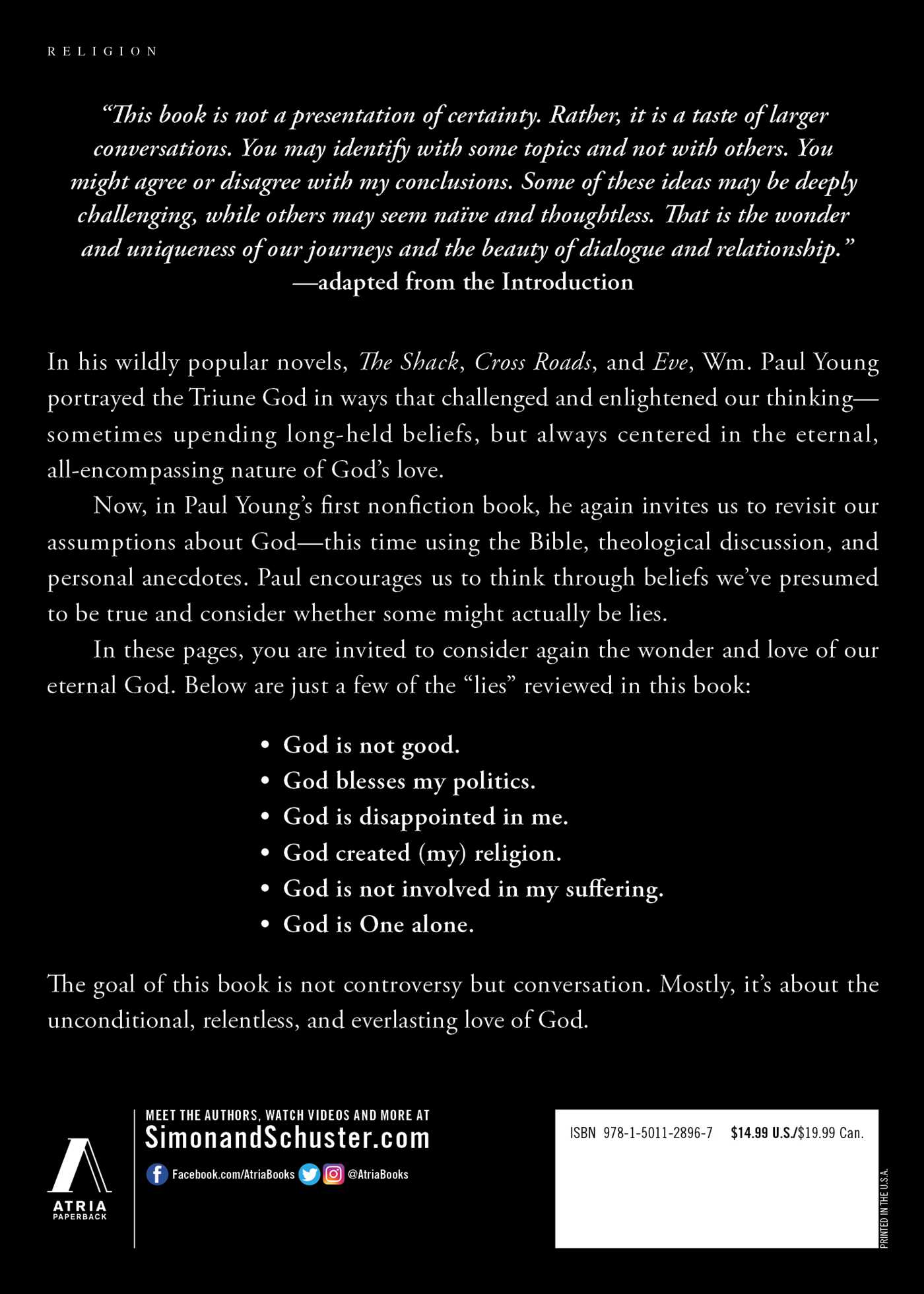 Lies We Believe About God

From the author of the bestselling novel The Shack and the New York Times bestsellers Cross Roads and Eve comes a compelling, conversational exploration of twenty-eight assumptions about God—assumptions that just might be keeping us from experiencing His unconditional, all-encompassing love.

In his wildly popular novels, Wm. Paul Young portrayed the Triune God in ways that challenged our thinking—sometimes upending long-held beliefs, but always centered in the eternal, all-encompassing nature of God’s love.

Now, in Wm. Paul Young’s first nonfiction book, he invites us to revisit our assumptions about God—this time using the Bible, theological discussion, and personal anecdotes. Paul encourages us to think through beliefs we’ve presumed to be true and consider whether some might actually be false.

Expounding on the compassion fans felt from the “Papa” portrayed in The Shack—now a major film starring Sam Worthington and Octavia Spencer—Paul encourages you to think anew about important issues including sin, religion, hell, politics, identity, creation, human rights, and helping us discover God’s deep and abiding love.

Lies We Believe About God 1 “God loves us, but doesn’t like us.”
It is the middle of winter in northern Alberta, Canada. The temperature is well below zero, one of those days that is so cold your nose hairs feel like little sticks plugging up your nostrils and every exhalation of breath becomes its own fogbank. I was born not too far from this city, up in the northern prairies.

“At least it’s a dry cold,” someone offers, which is true, but not that comforting.

We enter the building and I unwrap the layers of protection, trading them for the warmth of this place of incarceration. We are visiting a women’s prison. The women who have asked me to come and speak said that dozens of copies of The Shack have been making the rounds and having an impact. The government has given these inmates a “time-out,” an invitation to think about their lives and choices, something that people outside these walls have little opportunity to do. These women are here today to spend an hour with me, by their own choosing. Their presence is a gift.

Those who have eyes to see will find much wonder beneath tough exteriors and callous hearts. Most of the women are here because of a relationship gone wrong, and their suffered betrayals and losses are visible in their bluster of defiance or barely concealed shame. I feel quite at home here, among the bruised and wounded. These are my people, our people.

I don’t remember what I talked about. It probably had to do with the prisons in my own life, places that became precious to me because they were all I knew. About how we hold on to the certainty of our pain rather than take the risk of trusting anyone ever again. Deeply wounded souls in the room began to weep. Bruce Cockburn, the Canadian poet and musician, would call these “rumours of glory.” Lost coins, lost sheep, lost sons, but not just any. These are my sons, my sheep, and my coins.

I finish my talk and only a few leave. Others wait to have me sign a book. I hug everyone, which I am certain is a violation of all sorts of rules. But I have been breaking such codes for a while, and no one ever interferes with these sacred encounters. A woman stands waiting, her body tense with emotion. When I simply take her in my arms, it is as if I set off a charge that lets the dam burst. She sobs uncontrollably, for minutes. I whisper that it is okay, that I have other shirts, that I have her and she is safe. I can’t comprehend all the misery and humanity that is flooding through this one small touch, but it is real and visceral and wrenching.

Finally, she stops the heaving enough to find some words.

“Do you really think,” she whispers in short bursts, “that Papa is fond of me?”

And there it is, the question. This tender human being is entrusting me with this monumental question. Even those who don’t believe that God exists are desperate to know that love does and that love knows who we are. More, we are driven from within to take the risk to ask of someone or Someone, Do you find anything in me that is lovable, that is enough, that is worthy of being loved?

There is a scene in The Shack in which the main character, Mackenzie, is having his assumptions challenged. Mack is face-to-face with Sophia, the Wisdom of God, and she is asking him about the love he has for his children. In particular, she asks which of his five children he loves the most.

Even moderately healthy parents would tell you this question is impossible to answer. My wife, Kim, and I have six children. When our eldest was born, we couldn’t imagine ever having the capacity to love another child. Our first used it all up. But then our second arrived, and suddenly there was a new depth of love that either hadn’t existed or had been dormant before his arrival. It is as if each child brings with him or her a gift of love that is deposited into the hearts of the parents.

In the religious subculture in which I was raised, we all knew that God is love. We said it and sang it all the time, until it didn’t mean that much. It was simply the way that God is. It is like the grandchild who says, “But you have to love me. You’re my gramps.”

But saying “God is love” doesn’t capture our question, does it? So I’ve made a habit of rephrasing the line “God loves you,” and instead of making it about God, I make it about the object of God’s relentless affection—us. So throughout The Shack, Papa would say, “I am especially fond of her or him.” There is a world of difference between saying “I love you,” which is about me, and saying “I am especially fond of you,” which is about you. Both are correct, but the latter somehow pierces the disquiet of our souls and says, “Yes, I know you love me, but do you know me and do you like me? You love because that is the way you are, but is there anything about me that is worth loving? Do you ‘see’ me, and do you like what you ‘see’?”

“Do you really think,” she whispers in short bursts, “that Papa is fond of me?”

I squeeze her tight. “Yes,” I whisper back as we both dissolve into torrents of tears. “Papa is especially fond of you!”

Minutes later she regains a semblance of emotional control and looks up into my face for the first time.

With another hug, she exits, leaving me thinking, Darlin’, that is all any of us needs to know! 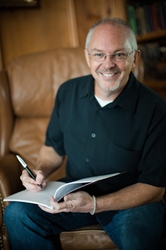 William Paul Young was born in Canada and raised among a Stone Age tribe by his missionary parents in the highlands of former New Guinea. He suffered great loss as a child and young adult and now enjoys the “wastefulness of grace” with his family in the Pacific Northwest. He is the author of Lies We Believe About God and the New York Times bestsellers The Shack, Cross Roads, and Eve.

Lies We Believe About God