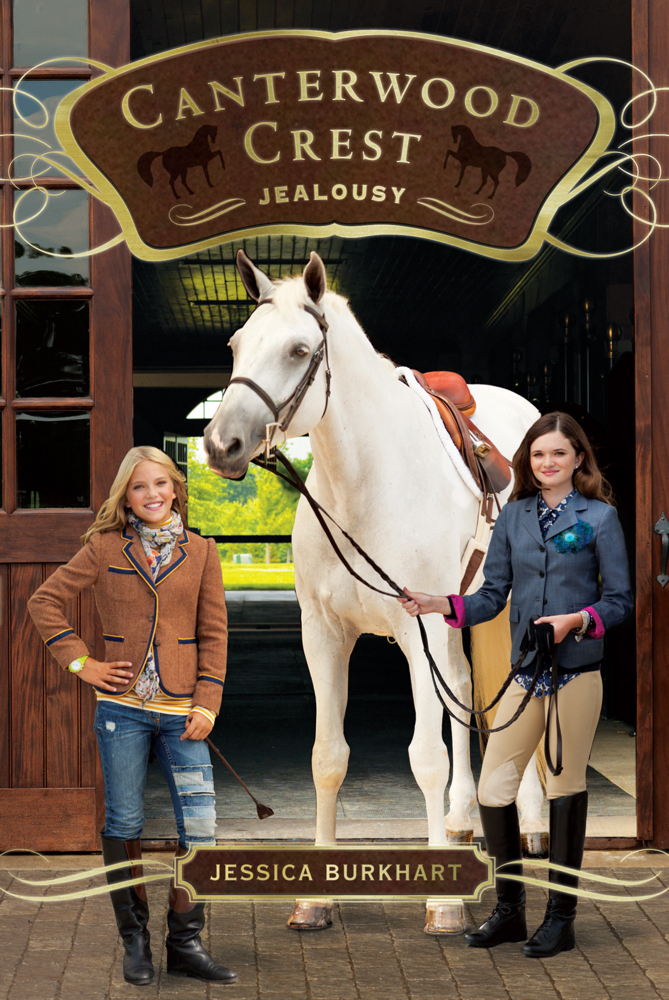 Lauren’s got to saddle up and sit tall if she’s going to make it to Thanksgiving at Canterwood Crest.

Thanksgiving break is approaching at Canterwood, but no one’s even close to relaxing—especially not Lauren. For one thing, her ex-boyfriend from Yates Prep is settling in, and he’s got an issue with Lauren’s new crush. And there’s the new girl, whose worldly equestrian background catapults her into the stable’s spotlight. To top things off, Lauren’s working on testing for the advanced team, and she fights feeling jealous toward Khloe, who’s already secured a seat. Looks like Lauren is in for a bumpy ride....

TRICK
I STARED INTO FAMILIAR GREEN EYES. EYES that I now could tell weren’t ocean blue. The clouds had shifted past the full Halloween-night moon and, mask now in his hands, the wrong guy stood in front of me. Wrong as in my ex-boyfriend.

I reached out and shoved his chest with both hands. Taylor Frost staggered backward a step, clutching his white mask and holding up a hand. The door to the ballroom opened as more people went inside. Music blared until the doors closed.

I’d been dreaming about tonight—waking every morning with a silly grin on my face just thinking that my birthday wish might come true. That Drew Adams, my crush, would kiss me on my birthday. But I had kissed someone else and not even realized it until it was too late. How could I not have known?

I was lost in a swirl of thoughts centered on Drew: How was I going to explain this to him? Who made a mistake like this? Would I lose Drew?

I closed my eyes for a second, screaming at the thoughts to evaporate. I had to pull myself together and focus on Taylor first.

“Stop!” I hissed. “I am not going to let this ruin my birthday party—the one that my friends worked so hard on and you just crashed.”

Taylor’s head jerked back a fraction.

“If you want to talk, we’re not doing it here,” I finished.

I turned away from him, stepped around the dark-brown carriage that was covered in twinkly lights. When I’d seen the carriage, I’d imagined it taking Drew and me down the trail that Lexa had decorated and described as “romantic and spooky.” The next carriage ride might be taking Taylor to Union.

I walked to a bench that was far enough away from my Halloween-slash-birthday masquerade party. I closed my eyes, rubbing my temples and probably ruining my makeup. Khloe’s surprise—a professional makeup artist for us—felt as if it had happened days instead of mere hours ago. Khloe, Cole, and all of my other friends were inside dancing, eating, and playing games.

It felt as if I’d seen everyone but Drew tonight. I crossed my fingers that he was inside and hadn’t bailed. It was a confusing scene, thanks to the masks. I hurried, hoping Drew or anyone else wouldn’t see me leaving with a guy. More than anything, I hoped Drew hadn’t witnessed The Kiss.

I shivered in the chilly late-October air as Taylor approached the bench. My light-pink dress with spaghetti straps didn’t offer much warmth. I bit the inside of my cheek, trying not to let Taylor see that I was cold—it felt weak. We’d known each other for almost two years, and I’d never been this upset with him. Maybe not with anyone. My teeth chattered, betraying me.

“Even though you’re mad, please take my coat,” he said.

Without a word Taylor slipped off his jacket and held it out.

I took the black suit jacket from him and slipped it on. I’d never felt so many things at once.

And . . . happiness? I had to be confusing serious fury with happiness, because there was no reason, not even the tiniest one, for me to be happy right now.

Taylor perched at the opposite edge of the bench and turned to me. We just looked at each other. He hadn’t changed since I’d seen him only a few short months ago. His cropped blond hair was still bleached from swimming, and his tan and few freckles had faded a little. It was almost like a dream—a very strange dream.

“What are you doing here?” I asked. The words exploded from my mouth. “You’re not a student! How did you get on campus? Why didn’t you tell me you were coming to my birthday party? Do Ana and Brielle know? Why did you kiss me? Why? We’re broken up! You can’t show up at my school and do that!”

I stopped, realizing that I was yelling. I didn’t want any attention drawn to us. I needed to talk to Taylor before any of my friends found out.

Taylor rubbed the back of his neck—something he did when he was nervous. “Lauren, again, I am so sorry,” he said. “I had this idea that it would be a huge surprise to show up on your birthday. I missed you.”

His last sentence caught me off guard and forced me to take a breath before responding.

“I shouldn’t have done that,” Taylor said. “You’re right—we’re broken up and I didn’t consider your feelings at all. I should have talked to you about it first.”

“I really wish you had—we’re friends. I’m not your girl-friend. You know you should have talked to me before showing up here.”

I rubbed my forehead. A headache was forming over my temples. I thought of Drew. Drew Adams—the très cute rider and guy I’d been going out with. I’d wished on every star in the sky that Drew would kiss me for the first time tonight. Now I was sitting in the cold with Taylor.

Tay and I’d had the best breakup possible after dating for five months. We’d managed to stay friends. He wasn’t a friend like Ana or Brielle—my friends from home. As if I’d talk to him about boys! Way too weird. We’d never talked about our current relationship statuses, so he knew zero about Drew.

Taylor paused. He ran a hand over his hair. I could still smell the faintest hint of chlorine from his endless hours in the pool. “We are friends. But, Laur, I came here to see if there’s a chance that we could be more than that.”

The hopeful look on his face made my stomach hurt a little.

“Taylor, why are you doing this?” I asked. “You’re at Yates. I’m at Canterwood. We both agreed on breaking up and fresh starts for both of us. Long distance isn’t something either of us wanted. Want. And I . . .” I shifted on the bench.

Apparently, my birthday was going to have celebration and confession. Mine was going to hurt Taylor, but I couldn’t let him think we had a chance at getting back together. I hated that I was about to hurt him—no matter how mad I was.

“Taylor, I’m sorry. You deserve to hear the truth from me. I like someone here. We’ve been on a few dates, and I want to keep getting to know him.”

I half closed my eyes, staring at him. Taylor didn’t say a word, but I knew him well. Too well for him to hide the shock, sadness, and disappointment on his face.

Finally he nodded. “Timing, huh? I’m sorry, Lauren. You’re a great girl. I shouldn’t have been surprised by what you told me.”

I blushed. “You’re being really sweet about this.”

“You’re too modest. I let you go. That was my mistake.”

“Are broken up,” Taylor repeated. “Laur . . . are you that into this guy? You know we’re good together.”

Taylor was acting so not Taylor.

“Am I speaking in French and not realizing it?” I continued. “We talked about all of this before. No. Long. Distance. Nothing’s different—so why are you asking me?”

The streetlamp cast light that made the silver and pink sequins sparkle on my dress as I stood, leaving my mask on the bench. I was too frustrated to sit. I glanced at the ballroom and wished that I was inside and dancing with my friends. If only Taylor had come just to surprise me by being here as a friend.

“Things have changed,” Taylor said. He stood and looked into my eyes. “It wouldn’t be long distance.”

My head snapped in his direction. Words wouldn’t come out. My brain felt as though it was stuffed with the insides of the pumpkins Jill and Lex had scraped out to make jack-o’-lanterns.

“What are you talking about?” My voice shook.

“Lauren, I got accepted to Canterwood.”