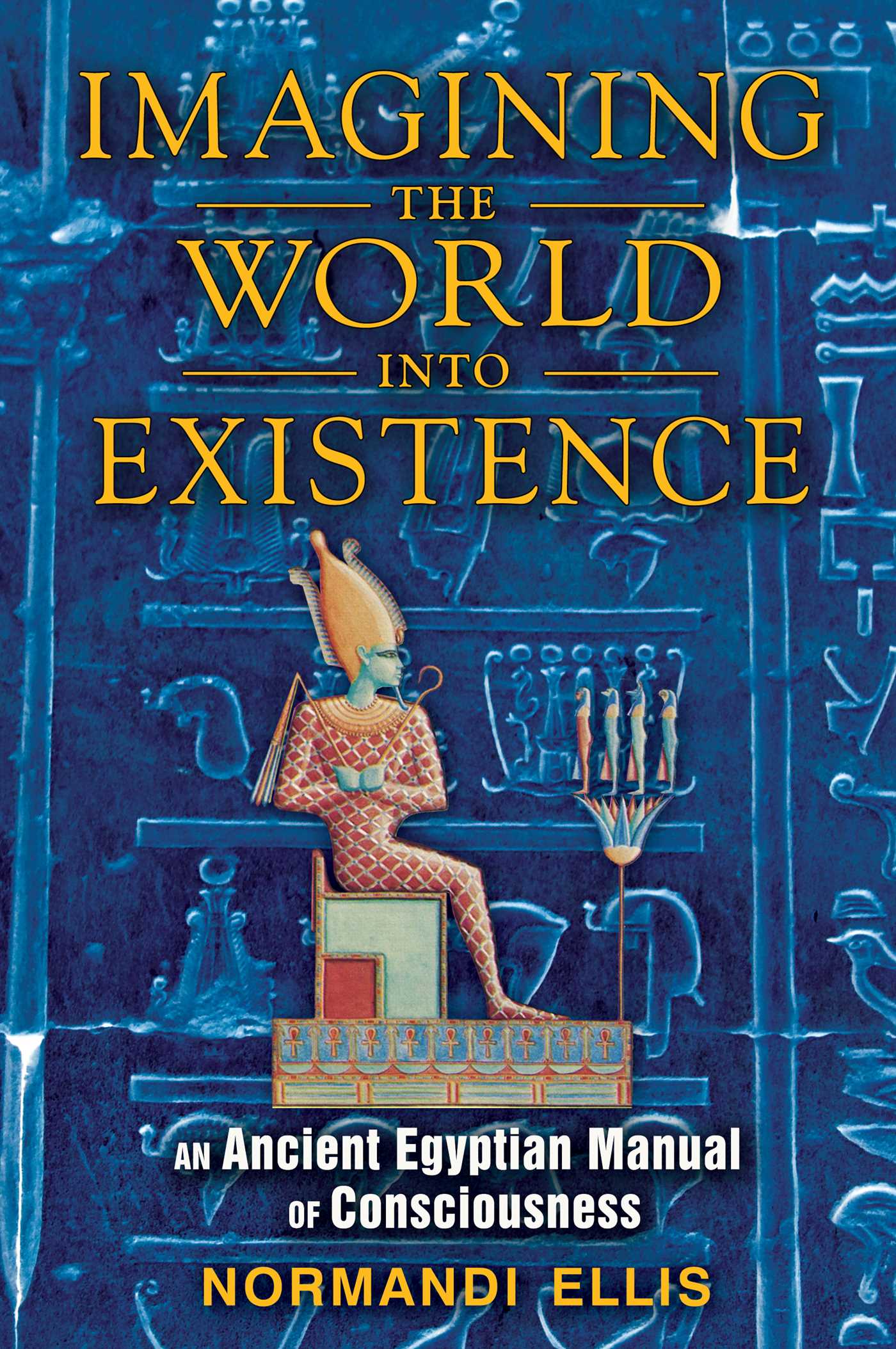 By Normandi Ellis
LIST PRICE $12.99
PRICE MAY VARY BY RETAILER

Drawing from the Egyptian Book of the Dead, the Pyramid texts, the Book of Thoth, and other sacred hieroglyphic writings spanning the three millennia of the Egyptian Mystery Traditions, Normandi Ellis reveals the magical language of creation and words of power that enabled the ancient Egyptians to act as co-creators with the gods.

Examining the power of hieroglyphic thinking--how thoughts create reality--and the multiple meanings behind every word of power, the author shows how, with the Neteru, we imagine the world into existence, casting a spell of consciousness over the material world. Uncovering the deep layers of meaning and symbol within the myths of the Egyptian gods and goddesses, Ellis investigates the shamanic journeys that ancient Egyptian priests used to view the unconscious and the afterlife and shares their initiations for immaculate conception, transubstantiation, resurrection, and eternal life—initiations that later became part of the Christian mystery school. Revealing the words of power used by these ancient priests/sorcerers, she explains how to search for the deeper, hidden truths beneath their spells and shows how ancient Egyptian consciousness holds the secret of life itself.

Revealing the initiatory secrets of the Osirian Mystery school, Ellis provides the essential teachings and shamanic tools needed to return to Zep Tepi--the creative source--as we face the transitional time of radical change currently at hand.

Magic of Magic
Words of Power

The Law of Attraction

We can attract people, events, and energies to us. The mind and emotion form mental and astral vibrations that create a unified energy that travels over long distances through the cosmos in the same way that light or sound vibrates. Our actions reverberate out toward others. Our feelings and thoughts move outward across the universe, at times attracting that which we do not consciously know. Thoughts and emotions may draw to us positive or negative events and people. Throw a pebble into a pond and it creates a ripple.

You can now see how the law of vibration relates to the law of attraction. Remember that worry is a very strong thought vibration because it combines both mental and emotional energy. You may bring negative events toward you simply by worrying about them. Worry, I learned, was a prayer for something I did not want. I now invoke what I really want and then consider it a done deal.

Knowing the power of a thought and how to form clear, strong thought energy allowed ancient Egyptian priests to heal, protect, and elevate the lives of those around them. To learn magic and the words of power took years of priestly training. For the sem priest, or a high priest, that knowledge was as essential as breath. In Conception of God in Ancient Egypt, Eric Hornung states magic is “the nuclear energy of early civilizations because of its dangerousness and its power to transform the world.” Used correctly, as we have said, magic heals, protects, empowers, and invokes. Used wrongly (willfully, or with intent to harm or manipulate), magic has disastrous consequences.

We have looked at mental energy, the will, and the emotions as they relate to creative energy. It is through the applied use of these vibrations that things can be made manifest in the physical realm. The most important prerequisite to using heka properly, however, is developing the proper state of consciousness. This requires the wisdom of the heart--the pure alignment of love with divine laws. Just because we can do something does not mean that we should do it.

Ancient Egyptian temple priests and priestesses performed all their magic in accordance with ma’at. Ma’at can be understood as truth, balance, and the foundation of the universe--in other words, natural law. One works in concert with Ma’at, the goddess of truth, as well as with the Ma’at principle. One does not attempt to sway the balance or change universal law. Although we know that life is filled with recurrent cycles and patterns, Ma’at’s truth is inalterable.

We expect the consciousness of every one thing to do what it knows how to do. Corn seeds naturally know their essential function and grow in the same manner as corn grows throughout the span of the eons. The original begets an inherent essential self-knowledge within its progeny. Every unit of the universe inherently knows what its function is. Humankind sometimes mucks up the cogs of the universe, either through human error or misused intention, and that can change the natural order of things. Egyptian pharaohs did not attempt to dam the Nile because to do so ran counter to the laws of Ma’at established at the beginning of time. The kingdom relied instead on the blessing of Hapi, Khnum, Satis, and other river deities to send the waters at the right time and at the right levels.

In the modern world’s haste to control a natural, neter-ed process, a hydroelectric dam was built on the Nile near Aswan to generate more energy. That dam backed up the river, flooded Nubian farms and homes, and created a mass exodus of peoples from their native land. The massive social and environment stresses caused by the dam have been felt throughout Sudan, Egypt, and as far as the Mediterranean Sea.

Over time, farms that were once fertilized by the river were now overgrazed and overproduced to feed a growing population. Thus, the land grew poorer because it was no longer fertilized by the flood waters. The exhausted land now needs chemical fertilizer to replace the minerals that the flood had naturally provided. Egypt created a number of industrial plants to generate the chemicals necessary to replenish the land, and most of the electricity generated by the Aswan High Dam was required to run the factories. One wonders whether the willful change in the river’s natural cycle created a better or worse situation.

One can see that there is a problem here. As the old salad dressing commercial used to say, “It’s not nice to fool Mother Nature.” Environmentalists try to draw attention to what happens when we blow up mountaintops and throw coal slag into rivers or mess around by altering the genetic codes of the food we eat. This is not good magic. This is not technological advancement, and it is certainly not working in accordance with Ma’at. In all likelihood, eating genetically altered foods will kill us. It will have the same effect as intentional and willful “black magic.” In essence, it’s not magic; it’s arrogance.

Conversely, the potential exists in every atom to return to its perfect state. The energy field exerted by our thoughts and desires--and a deeper understanding of how we grow--can affect our bodies, our environment, and our lives for the better. By our choices, actions, and states of mind, we alter the rate at which the atoms of our bodies vibrate. This is the underlying principle of personal growth and spiritual unfolding. Nothing is inanimate in the universe. Nothing is static. No energy is ever destroyed. It only transmutes, and this mobility makes things better over time. Our lives are influenced by our own mental and environmental vibrations and by the active innate intelligence of God.
Normandi Ellis

“Normandi Ellis’ work of a lifetime began when she wrote Awakening Osiris, her ecstatic translation of the hieroglyphs found in the ancient Egyptian Book of the Dead. It culminates nearly 30 years hence in her newest book Imagining the World into Existence. In 1988, she said: ‘We make of ourselves what we imagine.’ Now, in 2012, we see she has imagined well.”

– Alan Richardson, co-author of The Inner Guide to Egypt

“Normandi Ellis takes her reader on an extraordinary journey into the myths and magic of Ancient Egypt. And the journey is as beautiful, fragrant and mysterious as Egypt itself.”

– Timothy Freke and Peter Gandy, authors of The Hermetica and The Jesus Mysteries

“This remarkable book emulates Egypt itself; it fuses philosophy, religion, art and science into a single inextricable Unity. Like an accomplished Egyptian temple or sculpture, it looks effortless yet is extremely subtle and complex. It resonates Egypt. It ‘breathes’ Egypt. It is almost like actually being there! Not many books do that.”

– John Anthony West, author of Serpent in the Sky and The Traveler's Key to Ancient Egypt

“Bravo! At last, the book from Normandi Ellis we have all been waiting for! Her knowledge and direct connection to the myths, the glyphs, and the symbolism of ancient Egypt have given us the clearest statement ever of the cosmology and relevant truths written in the scrolls. This book is a must for anyone seriously interested in the magic of ancient Egypt. I’m awed and inspired by its brilliance!”

– Nicki Scully, co-author of Shamanic Mysteries of Egypt and The Anubis Oracle

“Normandi Ellis is unique in understanding the deeper aspects of human existence and the way the ancients perceived the world. This is an excellent book. Read it!”

– Robert Bauval, co-author of The Orion Mystery and Black Genesis

“Normandi Ellis’ magnificent Imagining the World into Existence: An Ancient Egyptian Manual of Consciousness is a breakthrough of holistic literature at this crucial time. She creates a new language of holism, thereby completing the task that academics — split from by disciplinary boundaries and linear subject/object orientation of language — have failed to even identify. At the crucial impasse faced by humanity today, we all can benefit from Ellis’ warning: ‘Failing to make conscious life changes because we fear the big turnaround leases us down a destructive and disorientating path.’”

“Revealing the initiatory secrets of the Osirian Mystery school, Ellis provides the essential teachings and shamanic tools needed to return to Zep Tepi-the creative source-as we face the transitional time of radical change currently at hand.”

“What Ellis reveals...is relevant for anyone who wants to know how our thoughts create our reality, or who is interested in the ancient Egyptian cosmic mindset and how it may inform us as we face future challenges.”

By Normandi Ellis
LIST PRICE $12.99
PRICE MAY VARY BY RETAILER