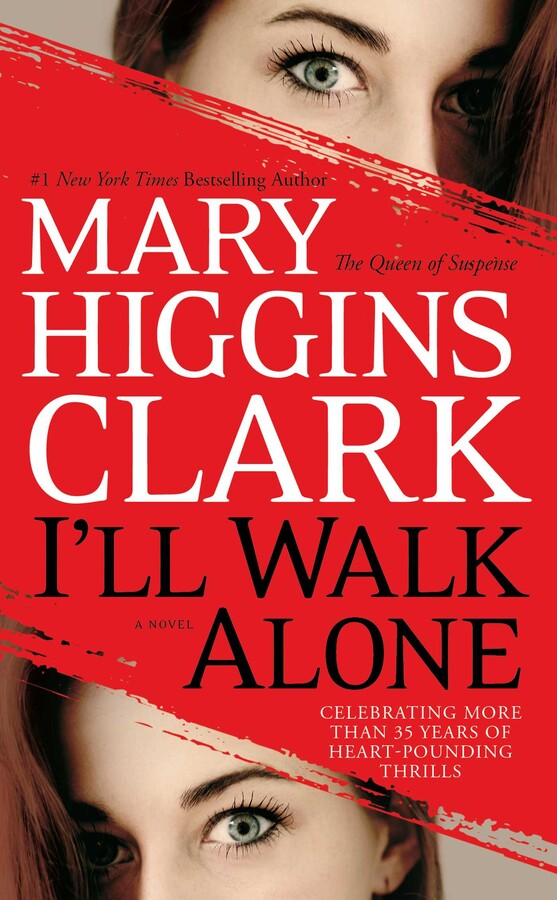 THE QUEEN OF SUSPENSE IS BACK! Mary Higgins Clark’s new novel—the thirtieth and most spine-chilling of her long career as America’s most beloved author of suspense fiction— is about the newest and most up-to-date of crimes: identity theft.

Who has not read about—or experienced—with a sinking feeling the fear that someone else out there may be using your credit cards, accessing your bank account, even stealing your identity.

In I ll Walk Alone, Alexandra “Zan” Moreland, a gifted, beautiful interior designer on the threshold of a successful Manhattan career, is terrified to discover that somebody is not only using her credit cards and manipulating her financial accounts to bankrupt her and destroy her reputation, but may also be impersonating her in a scheme that may involve the much more brutal crimes of kidnapping and murder. Zan is already haunted by the disappearance of her own son, Matthew, kidnapped in broad daylight two years ago in Central Park—a tragedy that has left her torn between hope and despair.

Now, on what would be Matthew’s fifth birthday, photos surface that seem to show Zan kidnapping her own child, followed by a chain of events that suggests somebody—but who? Zan asks herself desperately, and why?—has stolen her identity.

Hounded by the press, under investigation by the police, attacked by both her angry ex-husband and a vindictive business rival, Zan, wracked by fear and pain and sustained only by her belief, which nobody else shares, that Matthew is still alive, sets out to discover who is behind this cruel hoax.

What she does not realize is that with every step she takes toward the truth, she is putting herself— and those she loves most—in mortal danger from the person who has ingeniously plotted out her destruction.

Even Zan’s supporters, who include Alvirah Meehan, the lottery winner and amateur detective, and Father Aiden O’Brien, who thinks that Zan may have confessed to him a secret he cannot reveal, believe she may have kidnapped little Matthew. Zan herself begins to doubt her own sanity, until, in the kind of fast-paced explosive ending that is Mary Higgins Clark’s trademark, the pieces of the puzzle fall into place with an unexpected and shocking revelation.

Deeply satisfying, I’ll Walk Alone is Mary Higgins Clark at the top of her form.


“Fans will bite their nails to the quick.”
—Kirkus Reviews

“Teeming with tantalizing twists, Clark’s crackling tale of identity theft, revenge, and murder is a tempting and thought-provoking thriller.”
—Booklist

“Hang on to your hats for this latest page turner. . . . Scary.”
—Fresh Fiction

“One of Mary Higgins Clark’s most suspenseful books. Fans and newcomers alike will find themselves staying up all night to find out what happens next.”
—Bookreporter