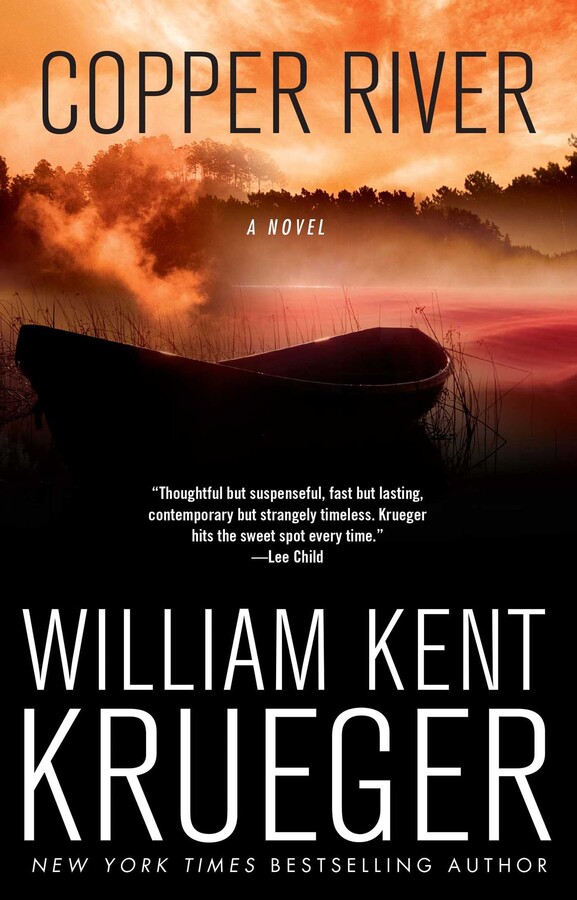 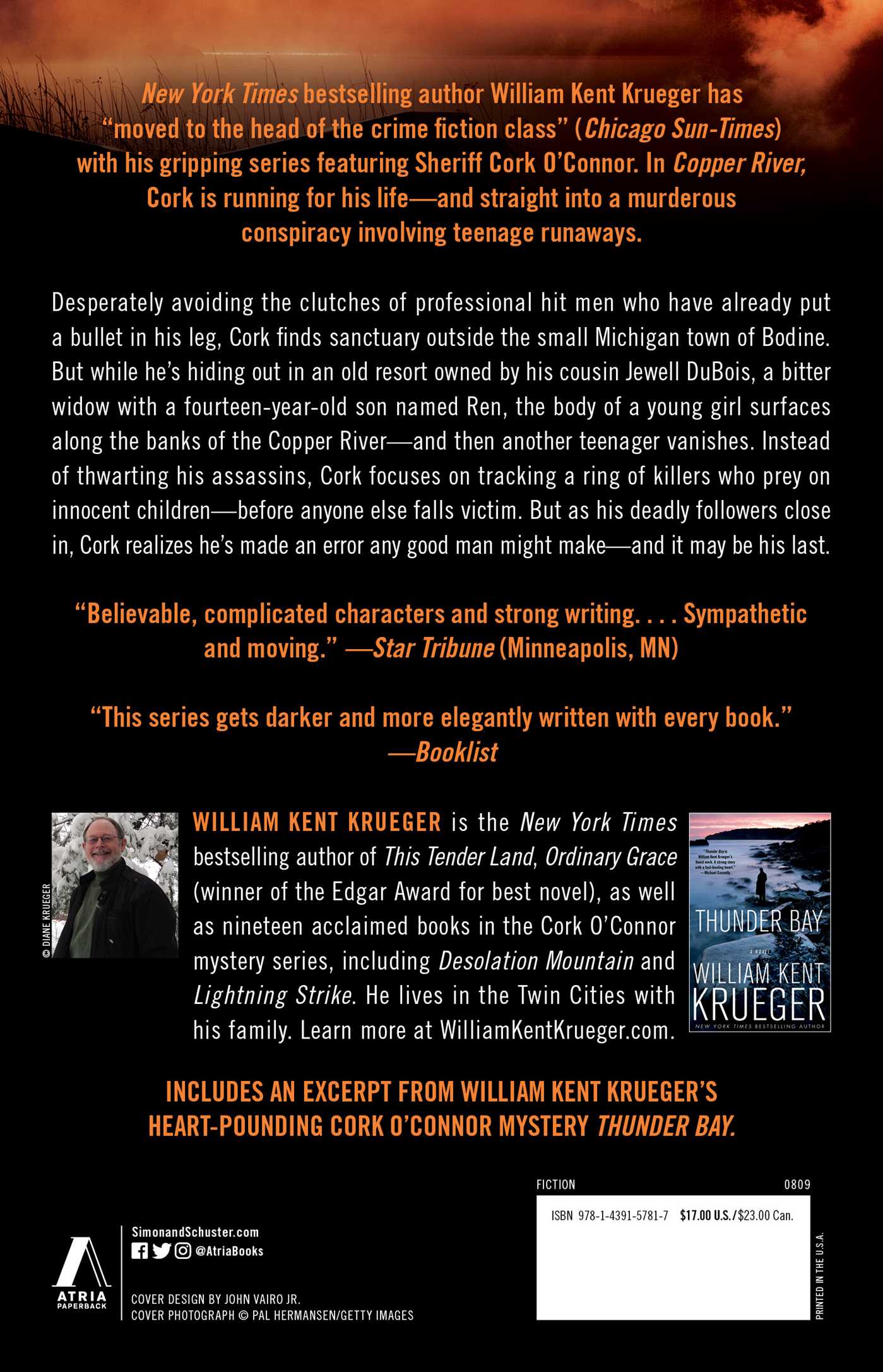 Desperately avoiding the professional hit men who have already put a bullet in his leg, Cork finds sanctuary outside the small Michigan town of Bodine. But while he’s hiding out in an old resort owned by his cousin Jewell DuBois, a bitter widow with a fourteen-year-old son named Ren, the body of a young girl surfaces along the banks of the Copper River. And then, soon after, another teenager vanishes.

Instead of thwarting his assassins, Cork focuses on tracking a ring of killers who prey on innocent children—desperate to catch them before anyone else falls victim. But as his deadly followers close in, Cork realizes he’s made an error any good man might make—and it may be his last.

COPPER RIVER by William Kent Krueger
Book Summary: The sixth novel in William Kent Krueger's award-winning suspense series finds Cork O'Connor on the run from hitmen hired by a crooked Chicago businessman who blames Cork for the death of his son. As he attempts to flee, they manage to wound him in the leg. He's seriously injured but still manages to make it to the resort camp in Michigan's Upper Peninsula, run by his recently widowed cousin, Jewell. While seeking refuge there, Cork stumbles upon a mystery when a local man is killed and the body of a teenage girl is found on the banks of the Copper River. Can these incidents be related? Cork and his former colleague Dina try and help Jewell, her son, and his runaway friend before another body turns up dead.
Questions for Discussion:
1) Copper River, while being a suspenseful thriller, is also about various forms of relationships -- parent to child, friend to friend, colleague to colleague. What do you think of the relationship between Dina and Cork? Do you think it will ever be more than just co-workers? What about the friendship between Charlie and Ren? Ned and Jewell? Even Delmar Bell and Calvin Stokely?
2) The relationship between Dina and Charlie, though brusque at first, becomes quite motherly. In the last chapter, we learn that Dina plans to return to Bodine to see Charlie. On page 308, Cork remarks, "You've only known her a couple of days, Dina." To which she responds, "Her, I've known my whole life." How are these two seemingly different characters alike?
3) Did you suspect Charlie of murdering her father? Given her abusive home life, would she have been justified if she did?
4) How has his father's murder affected Ren? Why do you think Jewell discourages Ren's interest in his Native American background? Do you think Jewell still harbors bad feelings against her cousin, Cork, because he arrested her late husband, Daniel?
5) On page 29, Cork and Ren discuss their fathers and Cork counsels him: "Try to remember that he's never completely gone. He's here." Ren tries to understand his father's heritage and legacy. How does Cork do the same?
6) How important is setting to this story? During their investigation into Sara Wolf's murder, Dina states "Because the river is the key." (p. 217) What does she mean by this? She cites The Odyssey on page 252. How is Odysseus's journey similar to their own?
7) His wife and children are only briefly mentioned in this book, so what can you gather about Cork's relationship with his wife, Jo? Did you think that perhaps he and Dina might get together? Did you want them to?
8) Jewell discovers poetry that Ned Hodder has written for her. Were you surprised when he then became a suspect? Were you relieved when he was cleared? Who did you suspect at that point? Do you think the friendship between Ned and Jewell is a foundation for something more?
9) Did you suspect the recent spate of deaths was connected to the Tom Messinger incident twenty years earlier? Were you surprised by the revelation at the end? Why doesn't Gary Johnson kill himself like he originally planned?
10) This is the sixth book in the Cork O'Connor series. Have you read any of the other books? In the beginning of Copper River, we learn that Cork is on the run from Lou Jacoby who mistakenly thinks Cork is responsible for his son's death. This story was told in the last Cork O'Connor book, Mercy Falls. Now that you have read this one, are you curious to read the others? What do you think about the violence in the story? Did you feel it was appropriate or gratuitous?
Enhance Your Book Club:
1) Many of the characters in Copper River, including Cork O'Connor, are of Ojibwe Indian heritage. You can learn more about this tribe by checking out these websites.
Here, you can learn all about Ojibwe vocabulary: http://www.native-languages.org/ojibwe_words.htm You can print this out for your members so everyone can learn a few new words in their dialect.
You can also learn about their customs here: http://www.turte-island.com/customs.html
2) Screen Anatomy of a Murder, the 1959 film that was shot in Marquette, Michigan, and compare and contrast to Copper River.
3) Has anyone in your book club ever been to the Upper Peninsula? You can find out more information about the area here:
www.upmichigan.com
Or if you live nearby, check out this site for fun activities your book club can do: http://www.exploringthenorth.com/mich/mich.html

William Kent Krueger is the New York Times bestselling author of This Tender Land, Ordinary Grace (winner of the Edgar Award for best novel), as well as eighteen acclaimed books in the Cork O’Connor mystery series, including Desolation Mountain and Sulfur Springs. He lives in the Twin Cities with his family. Learn more at WilliamKentKrueger.com.