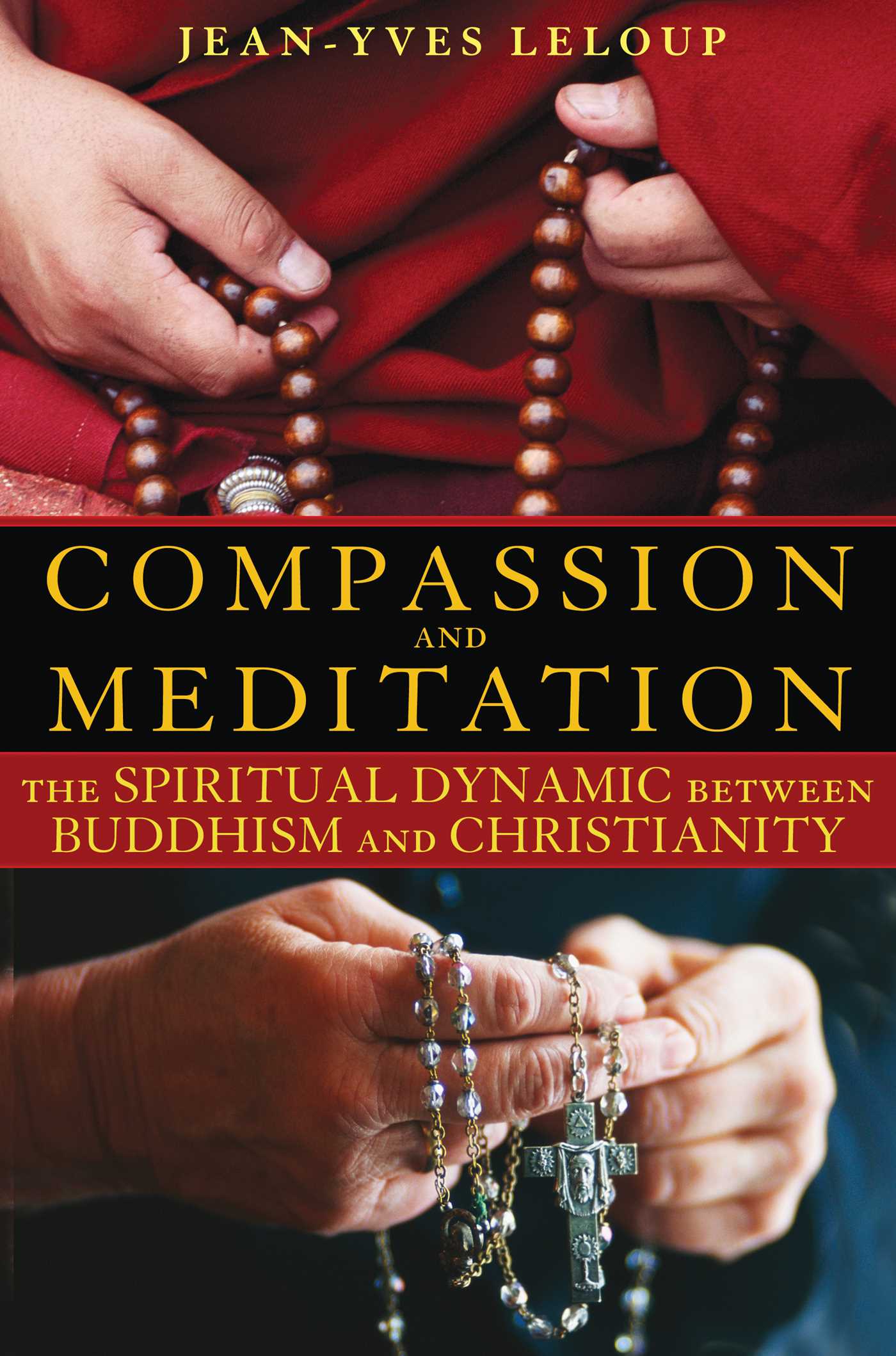 In Asian spiritual traditions the mountain traditionally symbolizes meditation while the ocean signifies compassion. Jean-Yves Leloup uses this metaphor to compare Buddhist and Christian approaches to meditation and compassion to reveal the similarities and divergences of these profound practices. Emphasizing their complementary nature, Leloup describes how Jesus and Buddha are necessary to one another and how together they form a complete system: Jesus as awakening through love, and Buddha as awakening through meditation. Where Buddha represents the forests, Jesus represents the trees. Buddha is brother to the universe, whereas Jesus is brother to humanity.

Nevertheless, these two religious traditions have a profound common ground. Compassion is central to Buddhism, and meditation practices have been central to many Christian traditions. Both view murder, theft, and the destructive use of sexuality as great barriers to realizing our essential being, and both agree on the need to rise above them. Here, however, Leloup suggests that both faiths could benefit from the precepts of the other. The complementary aspects of Christianity and Buddhism offer the possibility for a truly profound ecumenical religion whose interfaith relations are based on deep understanding of the true meaning and practice of meditation and compassion and not merely shared goodwill.

The King, the Ferryman, the Shepherd

In Tibetan Buddhism, there are three types of bodhisattva symbolizing the king, the ferryman, and the shepherd. The king symbolizes one who works for the good of all by saying: “I must begin by becoming master of myself. I must bring about peace in myself; only then can I help others.” Though his goal begins with himself, he is still on the same path of awakening and well-being for all.
The ferryman symbolizes one who is on the path but in the company of others.
The shepherd symbolizes one who is primarily concerned with others from the beginning, putting them always first, refusing to experience an awakening that does not include everyone.
We each have all these three archetypes within us, though some may be stronger than others.
The Christ favored the image of the shepherd. A number of Christian saints, including Paul and Thérèse of Lisieux, return constantly to this theme: “I do not want knowledge of God, peace, or paradise, as long as there is a single being who has not entered into this peace and knowledge.” This is characteristic of a highly awakened state of consciousness. As long as there is violence, loathing, and despair in a single being, then a part of my own being remains in despair and in suffering, and I cannot be completely happy.
If we are sometimes visited by feelings of sadness and despair during meditation, they are not necessarily our own. They may come to us because we have made ourselves available, permeable, and open to the suffering of the universe. True meditation is no guarantee of constant peace and bliss. After all the work we have done on ourselves, how can it be that we experience such moments of despair and loathing? It is because we are not just working on ourselves as separate bodies, but on the body of the universe, which enables us to experience another’s suffering as our own.
Nevertheless, we need not become fixated upon our own suffering, whatever its origin. We offer it up, thus participating in the well-being of the universe. When we experience an illness or depression not as our own, but as the universe’s, we are one with all beings who experience this kind of suffering. That may appear a bit grandiose in writing, but it is not at all the case in experience. This is the attitude of the ferryman, and sometimes we can find a special wisdom in the letting go of our personal history, our small suffering, which tends to submerge us.
A bodhisattva is someone who lives the spirit of this vow, who cultivates the qualities that enable one to feel one’s body as something infinitely vaster. To take the bodhisattva vow is to renounce one’s own limits. It is to feel that within us, there is something far vaster than our usual selves and that the other is really within us.
This recalls one of the key passages of the Gospels: “Whoever wants to save his life shall lose it, and whoever loses his life for me shall find it.” This is a general principle, which even applies to biology: paleontological evidence indicates that species that take no risks have a tendency to stagnate and stop evolving. One can also find this principle in business and finance, where money that does not circulate, accepting some risk, loses its value. The superiority of giving over preserving has its reflections in many domains.
This reflects a fundamental ontogenetic law of the transformation of being. If the grain of wheat does not “die” in the earth, it will remain isolated and static and never become a plant that gives fruit. The acorn that seeks to preserve its life will never become an oak. Contrary to what one might think, those who avoid risk, who keep and hold rather than give, are actually destroying themselves. Only the death of the self can allow the Self to manifest in life.
The way of compassion requires a deep faith in this possibility. That is why one begins with faith in the Buddha-nature, in awakening, in the divine, or in the Christ-nature in us. This faith has its basis in these two understandings:

1. We must first understand how our existential pain is a consequence of the emotional struggles of our ego. The origin of all that does evil to us, and introduces disquiet into the world, is always because of the presence of ego, of some sort of “me,” which advances itself at the expense of others.
It is interesting to consider the economic implications of this. In his book Reciprocity, Serge-Christophe Kolm attempts to establish a link between these teachings and the current economy. He shows that an economy based on profit and the accumulation of wealth can only lead to a dead end: conflicts, wars, and the destruction of society. In political and economic terms, he expresses the Buddha’s teaching that the source of suffering and disquiet, whether at the individual, social, or cosmic level, has its roots in the madness of the separate self, which seeks its own advantage at the expense of others. The bodhisattva attitude of desiring the well-being of others is a way of curing this disease in nature and in society. It represents the beginning of understanding.

2. The second element is an understanding that the Buddha-nature in each of us offers a possibility of liberation. If there were not already the unborn, unconstructed, and uncreated within us, there would be no freedom for what is born, constructed, and created. If there were not already within us this space, freedom, and emptiness, we would be nothing more than beings whose destiny is death; and death would have the last word. Yet there is a way, which leads beyond this world, destined for death because within us there is something that is unconstructed, and therefore cannot decompose, something that is uncreated, and therefore cannot die.
Jean-Yves Leloup

“Jean-Yves Leloup is that rare Christian who has mined the spiritual depths and mysteries of Christianity. His Christianity is neither staid nor boring, but alive and deep, fresh and ancient. Buddhism takes on new meaning in this context so that we learn how the wisdom of each tradition, East and West, allows the Great Mystery to become grounded in our own being and from there into active compassion to our broken world.”

– Matthew Fox, author of Original Blessing, A New Reformation, and One River, Many Wells: Wisdom Sprin

"If one wishes to make sense of the world, French Orthodox priest Jean Yves Leloup believes the tools are to be found in the Christian and Buddhist camps equally."

" . . . [Leloup's] perspective on Buddhism is unique. . . . meditation practitioners interested in comparative religions may gain something from Leloup's perspective."

"New age and spiritual libraries on both sides need this."

" . . . worthwhile challenge for anyone wishing to learn more about meditative practices and comparative religion."

"This book was a refreshing read. Too often when a book discusses two religious systems it tries to put one above the other, or tries too hard to erase any differences. Leloup takes the middle path and discusses two faiths without making one out to be superior, and without making them into one practice. Christianity and Buddhism are both revered, and kept distinct, complimenting each other like Mind and Heart; Compassion and Meditation."

“Every great prophet or guru brings with him or her a central message, and Buddha and Jesus are no exceptions. Buddha brought the wave of compassion and Jesus, in my humble opinion, brought the healing energy of love. Unfortunately, in the process of ego personalities’ organizing of these messages for mass consumption, the messages are lost and often end up polarized with other systems. In no other time in history has it been so imperative to bring the world’s traditions into balance. This book dives into the commonality of both systems by revitalizing the original messages of compassion and meditation.”