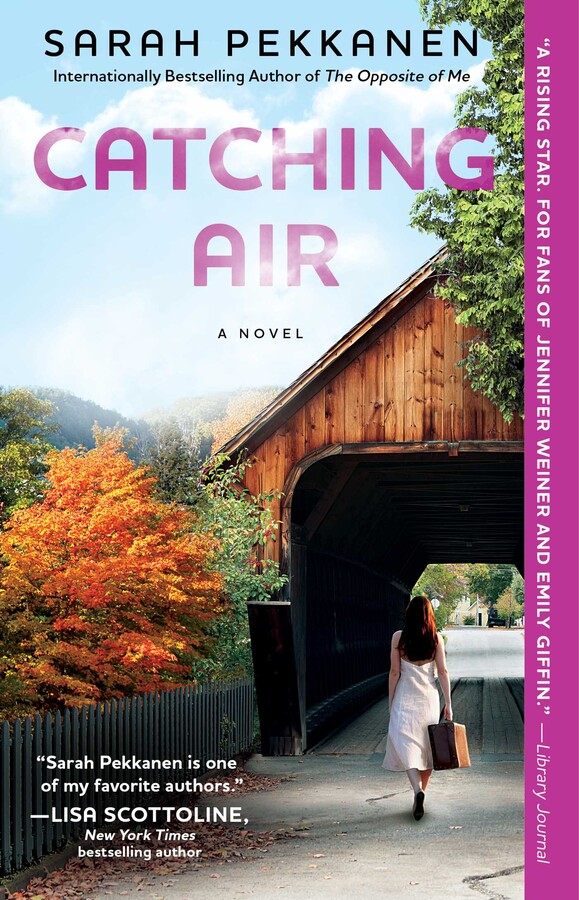 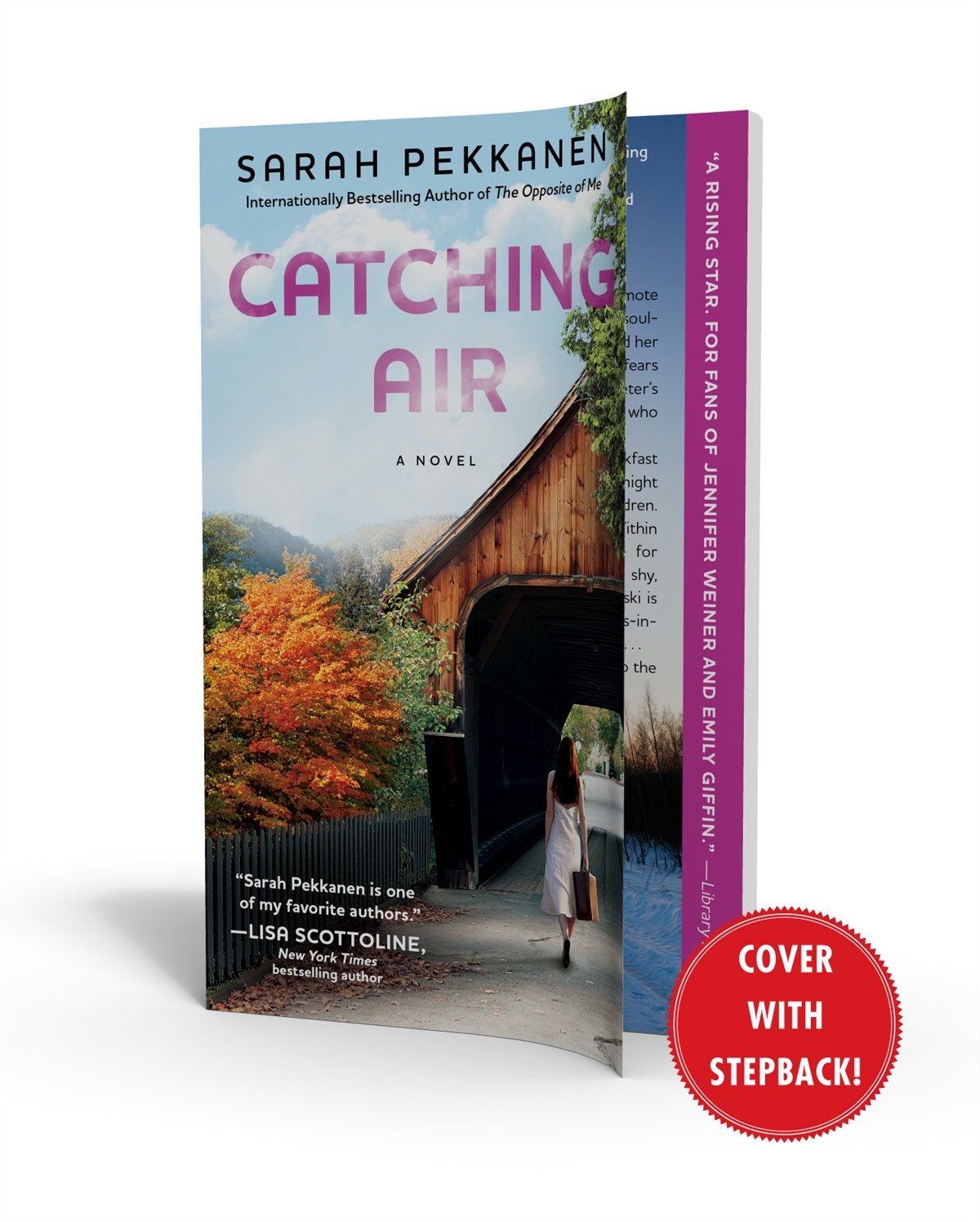 By Sarah Pekkanen
LIST PRICE $10.99
PRICE MAY VARY BY RETAILER

A vibrant, compulsively readable novel about two married couples who pursue a dream to open a bed-and-breakfast in small-town Vermont, from the internationally bestselling author of Perfect Neighbors and The Wife Between Us.

In her previous works including The Best of Us, “rising star” (Library Journal) Sarah Pekkanen captivated readers by penning “refreshingly introspective, sharply realistic, and tenderly humorous” novels (Booklist) that had readers “flying through the pages” (Hoda Kotb, Today show). Now, in Catching Air, Pekkanen turns an unflinching eye on the tangled relationships of two pairs of thirty-somethings.

A chance to run a B&B in snowy, remote Vermont—it’s an offer Kira Danner can’t resist after six soul-crushing years of working as a lawyer in Florida. As Kira and her husband, Peter, step into a brand new life, she quells her fears about living with the B&B’s co-owners: Peter’s sexy, irresponsible brother Rand, and Rand’s wife, Alyssa…who is essentially a stranger.

For her part, Alyssa sees taking over the B&B as the latest in a string of adventures. Plus, a quiet place might help her recover from the news that she can’t bear children. But the idyllic town proves to be anything but serene: Within weeks, the sisters-in-law are scrambling to prepare for their first big booking—a winter wedding—and soon a shy, mysterious woman comes to work for them. Dawn Zukoski is hiding something; that much is clear. But what the sisters-in-law don't realize is that Dawn is also hiding from someone…

Relatable and dynamic, Catching Air delves deeply into the vital relationships that give shape to women’s lives.


Tucker loved to divide time into segments like an orange; he was a whiz with numbers. She could see him taking over the entire company someday. Dawn knew his father would regret doubting Tucker.
Where was the bus? Dawn ducked out of the shelter and peered up the street, but she could see only a snarl of yellow taxis. The rain was picking up, soaking through the bottoms of the blue Keds sneakers she wore for commuting. Dawn was tempted to take a cab, but she always rode the bus to work and it was important that she go about her usual routine, that she act as if this was a normal day.
She’d pick up a triple espresso for the vice president on her way in, filter his calls, send his faxes, manage the stream of visitors to his office, and order a tuna-salad sandwich for lunch, though she doubted she’d be able to eat a single bite. Then, at precisely 2:00 P.M., she’d take a stack of clients’ checks to the bank. Simple.
She heard something that made her blood freeze: a bark. A German shepherd was straining against his leash, bearing down on Dawn. She froze and averted her eyes while the dog sniffed at    her.
The owner finally seemed to notice Dawn’s fear. “Hey, he’s friendly,” she said.
Get him away from me! Dawn wanted to scream. She always kept an eye out for approaching dogs and managed to evade them; how had this one slipped through her vigilance? Her heartbeat thudded in her ears. The giant, hairy beast was still there, sniffing all around her, when the bus finally pulled up, its brakes squealing. Dawn almost slipped on the steps in her haste to board. She took a deep, shuddering breath when she was safely in a seat. It was as if that dog had sensed her anxiety, had been drawn to it. Hadn’t she heard somewhere that dogs could smell fear?
Four days, she repeated. She only needed to get through the rest of the week, and then it would all be over. No one would be harmed, no one would be upset with her. And her golden life with Tucker could officially begin. She leaned her cheek against the cool glass of the window and watched the heavy raindrops slide past, turning the city into a blur.

By clicking 'Sign me up' I acknowledge that I have read and agree to the privacy policy and terms of use. Free ebook offer available to NEW US subscribers only. Offer redeemable at Simon & Schuster's ebook fulfillment partner. Must redeem within 90 days. See full terms and conditions and this month's choices.
This reading group guide for Catching Air includes discussion questions and ideas for enhancing your book club. The suggested questions are intended to help your reading group find new and interesting angles and topics for your discussion. We hope that these ideas will enrich your conversation and increase your enjoyment of the book.

1. In what ways do Alyssa and Kira discover that they are more alike than they believed they were?

2. How are Rand and Peter contrasted throughout the novel? What are their different approaches to running the bed-and- breakfast?

3. For Dawn, following her heart rather than her head leads her into a disastrous outcome. Have you ever found yourself in a difficult situation because you were blinded by love?

4. Alyssa recalls a friend who went from weighing 350 pounds to running several marathons a year: “She hadn’t changed her habits; her habits had changed her.” What’s the meaning behind this distinction? What are some of the new habits that these characters develop because they are running the B-and-B?

5. Even though Kira, Dawn, and Alyssa are all grown women, how are their childhood experiences—particularly, the degree to which they felt safe and cared for—impacting them throughout the novel? Particularly for Kira and Alyssa, how are these experiences shaping how they think about becoming mothers themselves?

6. In thinking about her marriage to Rand, Alyssa notes, “Their relationship had never been truly tested.” Given that they regularly moved and traveled—and likely faced financial uncertainty as a result—did this analysis surprise you? What kinds of life events do you think really test a romantic relationship?

7. How do each woman’s memories of her mother drive her forward, or inspire her?

8. Kira becomes frustrated when she feels she’s bearing the weight of planning the wedding and the daily management of the inn without Peter equally contributing; Alyssa starts to panic when she realizes that perhaps she never really ensured that Rand also wanted a child as much as she did. To what degree is each woman responsible for the situations they find themselves in, and to what extent should they expect their husbands to behave differently?

9. Alyssa says that she was worried she’d “feel confined by bed rest” but that surprisingly, “all her traveling was what had prepared her for it.” What are some other seemingly polar opposite experiences that end up being mutually beneficial?

10. Consider where we leave Rand at the novel’s conclusion. What do you think will happen to his and Alyssa’s marriage? Do you think men are less likely than women to change their patterns of behavior?

11. Kira disappears from the B-and-B and confronts two men when she arrives in Florida. What kind of power has each man held over her sense of self since she and Peter moved to Vermont, and why is it essential for her to find closure with each of them?

12. Consider the different types of relationships that are depicted in the novel—romantic bonds, blood relations, in-laws, and friends—and discuss the expectations and “norms” associated with each.

1. Would you ever want to move to a vacation destination and open your own business? If yes, where in the world would you pick? What would the business be? Who would you want to run it with?

2. Sarah Pekkanen is the author of four other delicious novels! If you haven’t yet read The Best of Us, do so as a group, and think about the marriages depicted in that novel. Using the couples of these two books as examples, what would you say are the keys to a successful relationship? And where do the breakdowns that each couple face seem to originate from?

3. Throughout the novel, Kira perfects certain recipes that work well for feeding larger groups—like her butternut squash soup, or her fondue, or her pancakes. Do you have any tried and true recipes that you break out for guests spending the night, or for hosting a larger holiday meal? Did any of those dishes ever go disastrously wrong when you were hosting? Bring a recipe or two—and stories! —to share with the group. 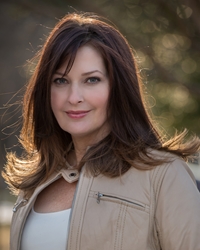 Sarah Pekkanen is the bestselling author of The Ever After, The Opposite of Me, Skipping a Beat, These Girls, The Best of Us, Catching Air, Things You Won’t Say, and The Perfect Neighbors. Her work has been published in People, The Washington Post, and USA TODAY, among other publications. She lives with her family in Chevy Chase, Maryland.

"Pekkanen weaves a satisfying tale of the nuances of marriage and duty and how small kindnesses can reestablish the bonds of family after an estrangement."

"Sarah Pekkanen is one of my favorite authors of women's fiction, and I was engrossed in CATCHING AIR from start to finish."

"Once again, Pekkanen delivers relatable characters and story lines, showcasing the strength and perseverance required to make relationships work. This is an entertaining and emotional read for fans of contemporary women's fiction”

“Internationally best-selling Pekkanen writes novels that offer thoughtful examinations of how the past shapes adult relationships and the differences between men and women. Many of the interwoven story lines are finely wrought, and the book as a whole is compelling.”

“Ultimately, Pekkanen shows that relationships of any kind take work, expression of love, and the willingness to take risks in order to save them.”

"Pekkanen is deft at finding each woman's voice, displaying all sides of eventual conflicts. Her strong narrative pulls the reader steadily through the book, with tension mounting as the weather worsens...a solid entry in the "women's fiction" genre."

"Within a few pages, you'll find yourself emotionally invested."

"A compelling and satisfying read...highly recommended."

"Smart and soulful, Pekkanen explores the place where self and sisterhood intersect."

"Fresh, appealing...the story is at turns funny and poignant."

"Sarah Pekkanen writes with wit and warmth and a deep understanding of the way women—mothers, daughters, sisters, friends—make a place for themselves in the world."

“Many of the interwoven story lines are finely wrought, and the book as a whole is compelling.”

By Sarah Pekkanen
LIST PRICE $10.99
PRICE MAY VARY BY RETAILER