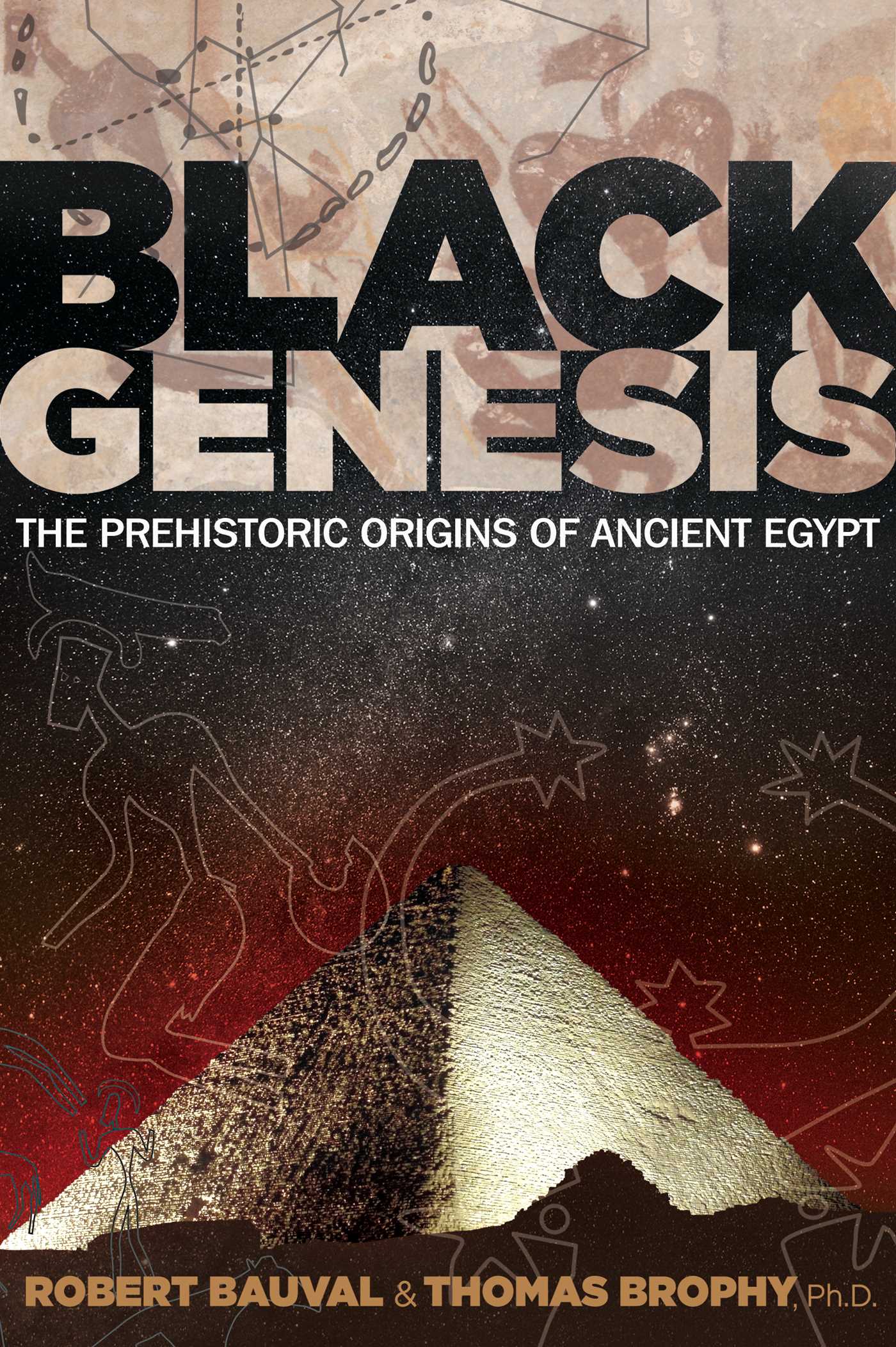 The Prehistoric Origins of Ancient Egypt

By Robert Bauval and Thomas Brophy
LIST PRICE $9.99
PRICE MAY VARY BY RETAILER

• Examines extensive studies into the lost civilization of the “Star People” by renowned anthropologists, archaeologists, genetic scientists, and cultural historians as well as the authors’ archaeoastronomy and hieroglyphics research

Relegated to the realm of archaeological heresy, despite a wealth of hard scientific evidence, the theory that an advanced civilization of black Africans settled in the Sahara long before Pharaonic Egypt existed has been dismissed and even condemned by conventional Egyptologists, archaeologists, and the Egyptian government. Uncovering compelling new evidence, Egyptologist Robert Bauval and astrophysicist Thomas Brophy present the anthropological, climatological, archaeological, geological, and genetic research supporting this hugely debated theory of the black African origin of Egyptian civilization.

Building upon extensive studies from the past four decades and their own archaeoastronomical and hieroglyphic research, the authors show how the early black culture known as the Cattle People not only domesticated cattle but also had a sophisticated grasp of astronomy; created plentiful rock art at Gilf Kebir and Gebel Uwainat; had trade routes to the Mediterranean coast, central Africa, and the Sinai; held spiritual and occult ceremonies; and constructed a stone calendar circle and megaliths at the ceremonial site of Nabta Playa reminiscent of Stonehenge, yet much older. Revealing these “Star People” as the true founders of ancient Egyptian civilization, this book completely rewrites the history of world civilization, placing black Africa back in its rightful place at the center of mankind’s origins.

Carlo Bergmann arrived in Egypt in the mid-1980s, sent there on a management-training course by the Ford Company. After a visit to the camel market in Cairo, Bergmann was so fascinated by these “ships of the desert” that he resigned from his job and then and bought his first camel in order to become a desert explorer. He set up a base in the oasis of Dakhla, increased his camel fleet to twelve, and roamed the desert in search of lost oases. Bergmann was eventually solicited by Dr. Rudolf Kruper of the Heinrich Barth Institute to assist him in his explorations southwest of Dakhla. But Carlo was not impressed with the way the archaeologists “explored” from the comfort of their 4-WD vehicles. He rightly believed that moving by camel or on foot radically increases the chances of spotting something of value. With blinding sunlight and a landscape that is much the same everywhere, one could easily miss seeing even the entrance to a cave if you were not vigilant and checking every rock and mound along the way. Carlo Bergmann also had the advantage of a “sixth sense” for where to look for prehistoric artifacts that he developed after years of exploring the desert on foot.

Bergmann knew that Bedouins in the past had been telling stories about a “lost temple” in open desert a few days march from Dakhla oasis. They had told the British archaeologist Sir Gardner Wilkinson in 1835 that “some ruins of uncertain date (that) was discovered about nine years ago by an Arab in search of stray camels . . . (and that its ancient) inhabitants are blacks.” Bergmann also knew that Wilkinson had not attempted to verify the story, probably because he discounted it as tall tales by imaginative Arabs. The same happened in 1910 to the British engineer and explorer W. J. Harding King who was also told by Bedouins of a “stone temple” that existed “eighteen hours journey west of Gedida in Dakhla Oasis,” but like Wilkinson before him, Harding King dismissed the story as twaddle. Carlo Bergmann, however, took these stories seriously and, in 2000, after six attempts to locate the alleged “stone temple,” he did, in fact, find something that matched the description and location given to Wilkinson and Harding King. In Bergmann’s own words,

The “stone temple” revealed itself as a conical hill about 30 meters high and 60 meters in length. On its eastern side there is a natural terrace. This platform, which has an average width of 3 meters and a length of approximately 35 meters is about 7 meters above the ground and fenced by a dry wall of stone-slabs. From the distance the place has some resemblance with the Nabataean rock-palaces and -tombs at Petra. When setting my foot onto the terrace my eyes glanced over a breathtaking arrangement of hieroglyphic texts, of cartouches of Khufu (Cheops) and of his son Djedefre, of short notes from stone-masons, of two figures of a pharaoh smiting the enemies and of enigmatic signs (“water mountain symbols”) evidently placed on the rock-face in wilful order. All these engravings were depicted in the midst of representations of animals and human figures from Prehistoric and Old Kingdom times. As pharaoh Djedefre’s name first caught my eye, I christened the site Djedefre’s water-mountain.

The Djedefre Water-Mountain, as Bergmann now called it, is 80 kilometres southwest of Daklha oasis and is now under the supervision of Egypt’s Supreme Council of Antiquities (SCA). Until recently, however, it was investigated by the German Archaeological Institute in Cairo and the Heinrich Barth Institute of the University of Cologne. The German team reported that the hieroglyphic inscriptions found on the east side of the mound mention several expeditions during the twenty-fifth and twenty-seventh years of the reign of the pharaoh Khufu, builder of the Great Pyramid at Giza (ca. 2450 BCE). They noted, too, that the name of Khufu’s son and successor, Djedefre, is more prominent and appears alongside (and also within) the so-called water mountain sign, which Bergmann describes as “a pack of horizontal zigzag lines framed by a sharply incised and slightly rounded rectangle, the upper corner of which ending in two small humps.”

The Djedefre Water-Mountain also has rock art engraved on its walls, which is clearly prehistoric, for it shows giraffes, elephants, and other creatures that since at least 4000 BCE can only be found thousands of kilometers farther south in Africa, but must have been here near Dakhla before that date when the Sahara was fertile. Most of the prehistoric rock art and the pharaonic inscriptions are high up on the east face and about 8 to 10 meters above ground. They can be reached by an ancient manmade escarpment that leads to a platform cut into the mound. The platform itself faces due east, the direction of sunrise, and it is very evident when one stands on this platform at dawn that there is astronomical meaning to this orientation, as we will discuss in chapter 4. The most prominent inscription is found dead center of the east face and bears the name of King Djedefre placed inside a rectangle that has two protrusions or “peaks” at the top, the latter being a stylized hieroglyph sign that denotes a “mountain”. The ancient Egyptians used a very similar sign but with a sun disk between the two peaks to denote the idea of “horizon” and “sunrise.” It is thus perhaps relevant to note in passing that Djedefre was the first royal devotee of a new “solar” cult devised by the priests of Heliopolis and was also the first pharaoh to incorporate in his name the word “Re” and, furthermore, added “Son of Re” to his royal titles.
Robert Bauval

Thomas Brophy, Ph.D., is an astrophysicist who has worked with NASA, including as a member of the Voyager II spacecraft instrument teams. The author of several books, including The Origin Map, and numerous published articles in scientific journals, he lives in Encinitas, California.

“Black Genesis offers astounding new insights as Bauval and Brophy forcefully support, with hard data, the radical idea that Egyptian civilization was the outgrowth of a sophisticated Black African culture that existed thousands of years prior to the earliest known pharaohs. Their book is a must read for anyone interested in genuinely understanding the true origins of ancient Egypt and the dynamics of how civilizations develop.”

“Readers of Black Genesis will never think of ancient Egypt in the same way again. Bauval and Brophy make the case that this venerable civilization was originated by Black Africans from the Sahara Desert and that the pyramids, the statues, and the hieroglyphs were the result of their knowledge and ingenuity. The authors trace the series of errors and misjudgments that have obscured the origins of this remarkable civilization. It is time for the record to be set straight, and Black Genesis is the book that may well do it. This is an authoritative, excellent, well-written book.”

“In Black Genesis, Bauval and Brophy combined their investigative skills to answer an obvious but often-neglected question, “Who were the ancient Egyptians?” With new astroarchaeological evidence they build a strong case for “The African origin of the pharaohs” and have dramatically altered our understanding of the past.”

“Extremely dense and possibly groundbreaking, Bauval and Brophy make an honest case for a “very different story of the origins of ancient Egypt.” Their scholarship is meticulous . . .”

“The tales of the authors’ 2008 expedition and of explorers in the past century add to the enticing read.”

“Both authors are highly accredited researchers who have provided an incredibly detailed book examining the connection between the astronomy of the pharaohs and their Neolithic counterparts.”

“Black Genesis is a captivating, thought-provoking, utterly intriguing read that traces back the origins of the high civilization of ancient Egypt into deepest prehistory. Buckle your seatbelts for a rollercoaster ride . . .”

The Prehistoric Origins of Ancient Egypt

By Robert Bauval and Thomas Brophy
LIST PRICE $9.99
PRICE MAY VARY BY RETAILER