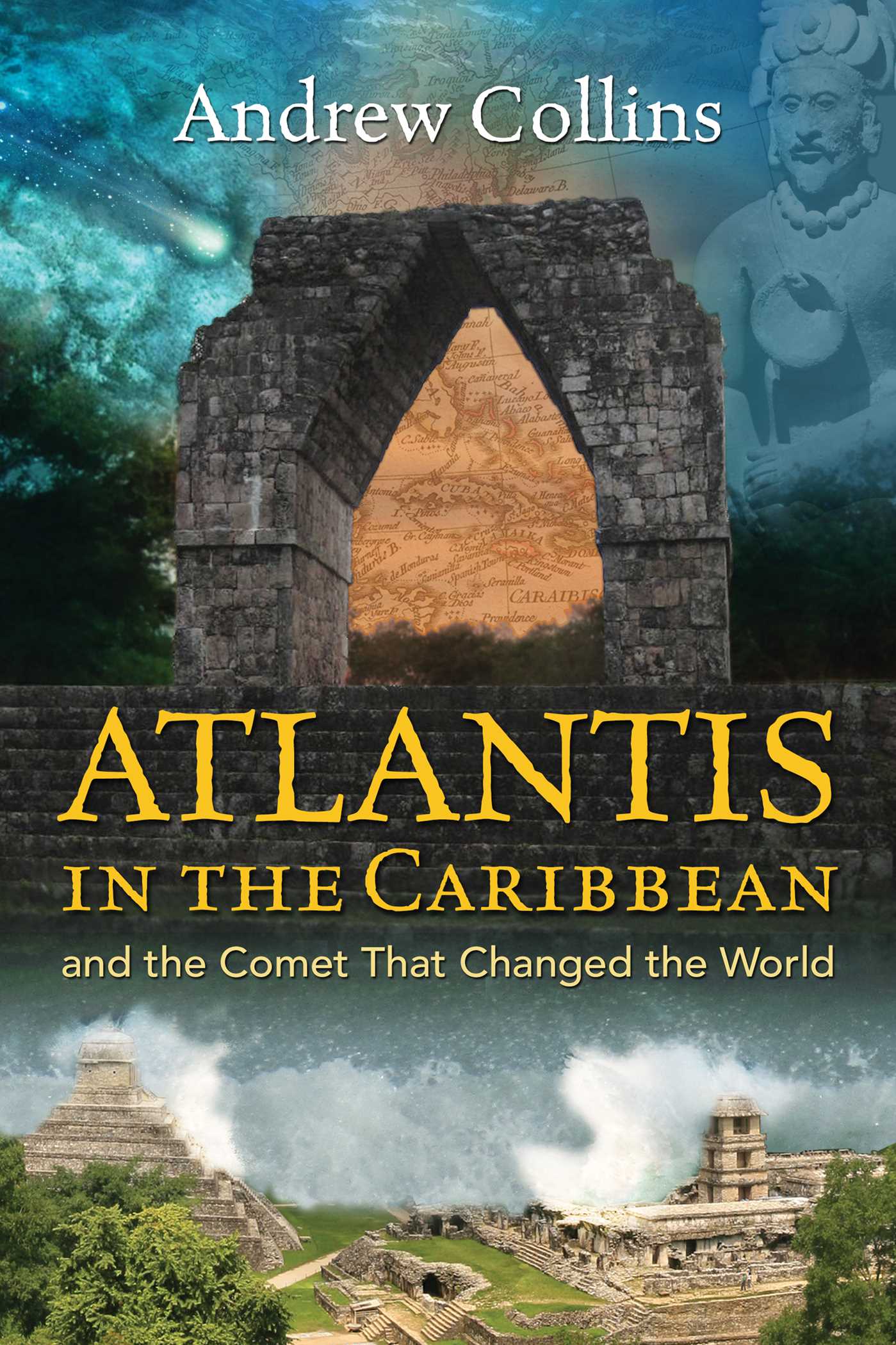 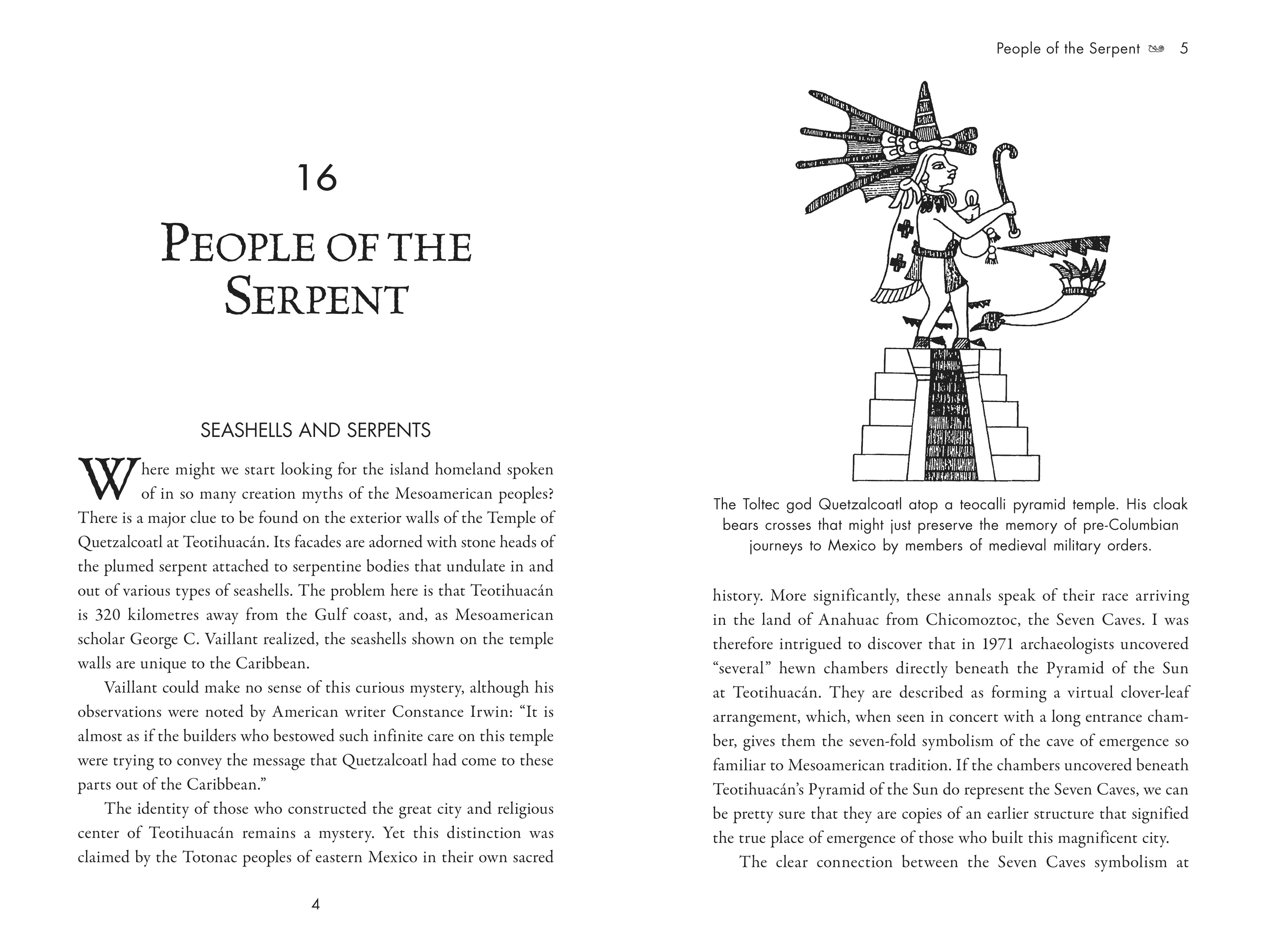 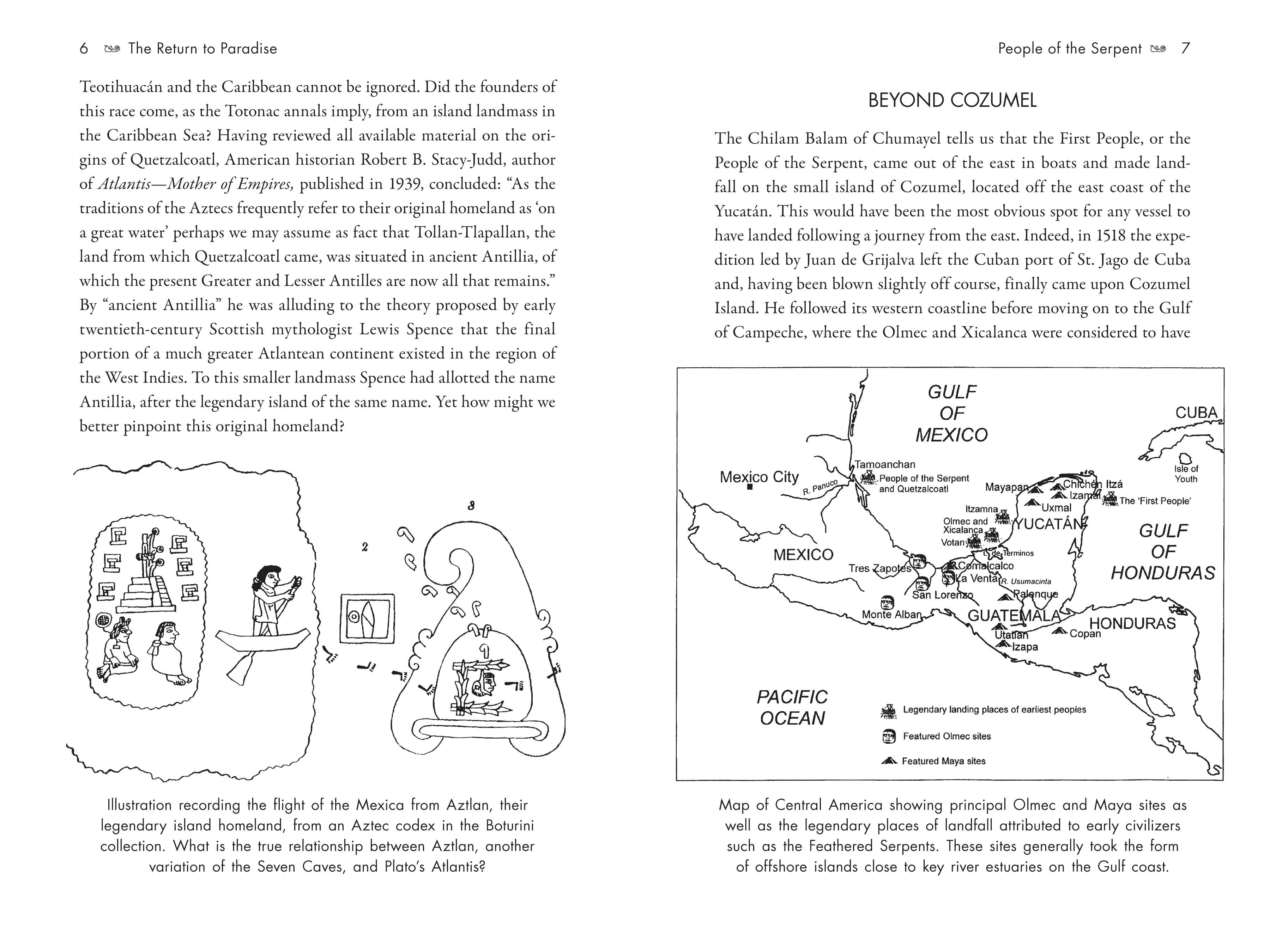 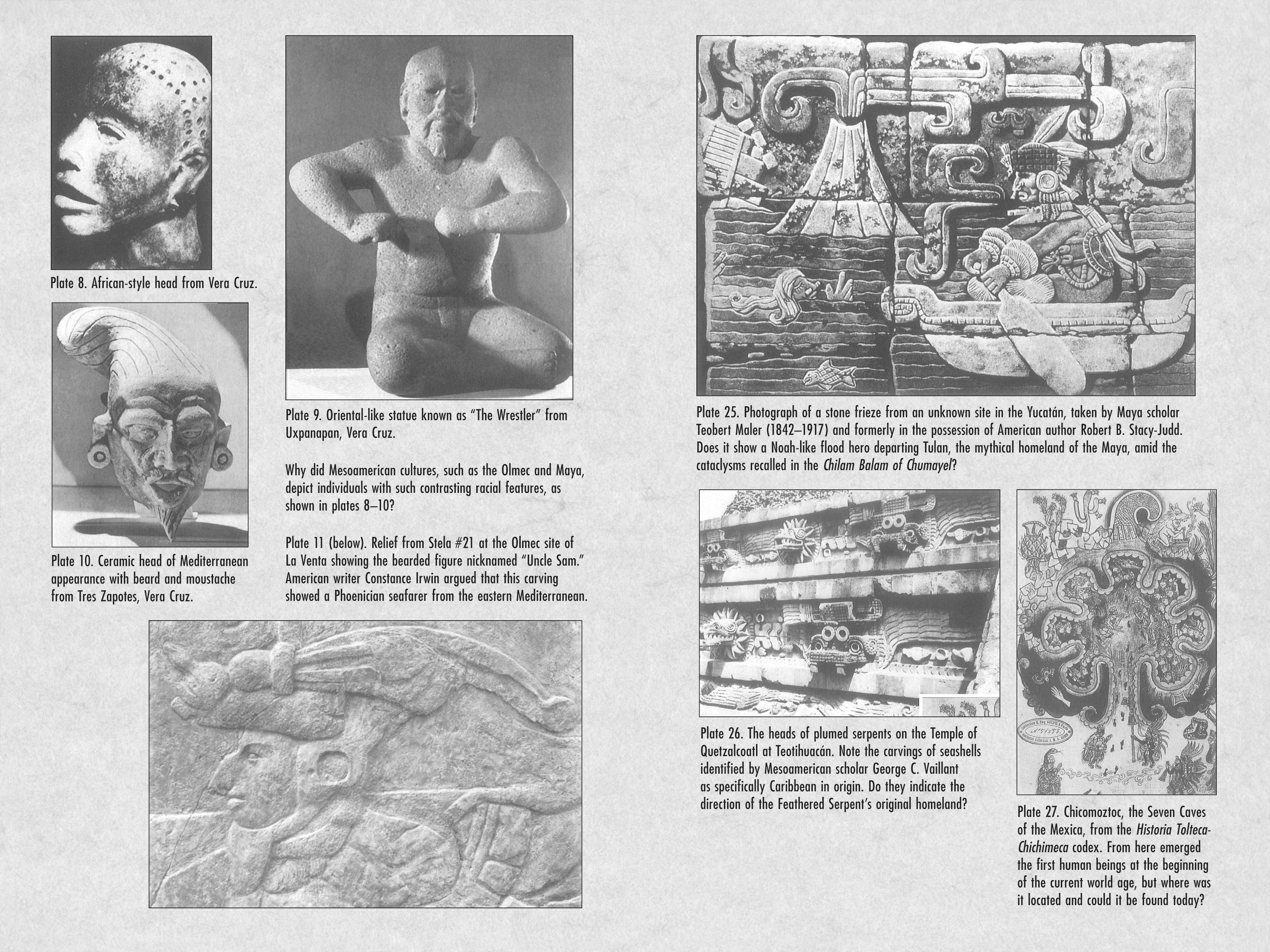 An in-depth investigation of the mounting evidence that Atlantis was located in the Bahamas and Caribbean, near Cuba in particular

• Explains how Atlantis was destroyed by a comet, the same comet that formed the mysterious Carolina Bays

• Compares Plato’s account with ancient legends from the indigenous people of North and South America, such as the Maya, the Quiché, and the Yuchi of Oklahoma

The legend of Atlantis is one of the most intriguing mysteries of all time. Disproving many well-known Atlantis theories and providing a new hypothesis, the evidence for which continues to build, Andrew Collins shows that what Plato recounts is the memory of a major cataclysm at the end of the last Ice Age 13,000 years ago, when a comet devastated the island of Cuba and submerged part of the Bahaman landmass in the Caribbean. He parallels Plato’s account with corroborating ancient myths and legends from the indigenous people of North and South America, such as the Maya of Mesoamerica, the Quiché of Peru, the Yuchi of Oklahoma, the islanders of the Antilles, and the native peoples of Brazil. The author explains how the comet that destroyed Atlantis in the Caribbean was the same comet that formed the mysterious and numerous elliptical depressions, known as the Carolina Bays, found across the mid-Atlantic United States. He reveals evidence of sunken ruins off the coasts of both Cuba and the Bahamas, ancient complexes spanning more than 10 acres that clearly suggest urban development and meticulously planned road systems.

Revealing the identity of Plato’s “opposite continent” as ancient America, Collins argues that Plato’s story was first carried back to the Mediterranean world by trans-Atlantic mariners, such as the Phoenicians and Carthaginians, as early as the first millennium BC. He offers additional ancient trans-Atlantis trade evidence from Egyptian mummies, Roman shipwrecks in the Western Atlantic, and the African features of giant stone heads in Mexico. Piecing together the final days of Atlantis and the wildfires, earthquakes, tsunamis, days of darkness, and advancement of ice sheets that followed the ancient comet’s impact, Collins establishes not only that Atlantis did indeed exist but also that remnants of it survive today, most obviously in Cuba, Atlantis’s original central island.

People of the Serpent

Where might we start looking for the island homeland spoken of in so many creation myths of the Mesoamerican peoples? There is a major clue to be found on the exterior walls of the Temple of Quetzalcoatl at Teotihuacán. Its facades are adorned with stone heads of the plumed serpent attached to serpentine bodies that undulate in and out of various types of seashells. The problem here is that Teotihuacán is 320 kilometres away from the Gulf coast, and, as Mesoamerican scholar George C. Vaillant realized, the seashells shown on the temple walls are unique to the Caribbean.

Vaillant could make no sense of this curious mystery, although his observations were noted by American writer Constance Irwin: “It is almost as if the builders who bestowed such infinite care on this temple were trying to convey the message that Quetzalcoatl had come to these parts out of the Caribbean.”

The identity of those who constructed the great city and religious center of Teotihuacán remains a mystery. Yet this distinction was claimed by the Totonac peoples of eastern Mexico in their own sacred history. More significantly, these annals speak of their race arriving in the land of Anahuac from Chicomoztoc, the Seven Caves. I was therefore intrigued to discover that in 1971 archaeologists uncovered “several” hewn chambers directly beneath the Pyramid of the Sun at Teotihuacán. They are described as forming a virtual clover-leaf arrangement, which, when seen in concert with a long entrance chamber, gives them the seven-fold symbolism of the cave of emergence so familiar to Mesoamerican tradition. If the chambers uncovered beneath Teotihuacán’s Pyramid of the Sun do represent the Seven Caves, we can be pretty sure that they are copies of an earlier structure that signified the true place of emergence of those who built this magnificent city.

The clear connection between the Seven Caves symbolism at Teotihuacán and the Caribbean cannot be ignored. Did the founders of this race come, as the Totonac annals imply, from an island landmass in the Caribbean Sea? Having reviewed all available material on the origins of Quetzalcoatl, American historian Robert B. Stacy-Judd, author of Atlantis--Mother of Empires, published in 1939, concluded: “As the traditions of the Aztecs frequently refer to their original homeland as ‘on a great water’ perhaps we may assume as fact that Tollan-Tlapallan, the land from which Quetzalcoatl came, was situated in ancient Antillia, of which the present Greater and Lesser Antilles are now all that remains.” By “ancient Antillia” he was alluding to the theory proposed by early twentieth-century Scottish mythologist Lewis Spence that the final portion of a much greater Atlantean continent existed in the region of the West Indies. To this smaller landmass Spence had allotted the name Antillia, after the legendary island of the same name. Yet how might we better pinpoint this original homeland?

The Chilam Balam of Chumayel tells us that the First People, or the People of the Serpent, came out of the east in boats and made landfall on the small island of Cozumel, located off the east coast of the Yucatán. This would have been the most obvious spot for any vessel to have landed following a journey from the east. Indeed, in 1518 the expedition led by Juan de Grijalva left the Cuban port of St. Jago de Cuba and, having been blown slightly off course, finally came upon Cozumel Island. He followed its western coastline before moving on to the Gulf of Campeche, where the Olmec and Xicalanca were considered to have first made landfall. The same thing happened a year later when Cortés set out to conquer Mexico. He, too, visited Cozumel Island before continuing his journey on to the Gulf coast and making landfall at what is
today Veracruz.

Where might vessels belonging to the People of the Serpent have come from before they likewise reached Cozumel Island?

Due east of the Yucatán at a distance of no more than 250 kilometers is Cuba, where both Grijalva and Cortés had set out on their own respective voyages to New Spain. Was it possible that the legendary founders of the Mesoamerican tribal dynasties came originally from Cuba?

In his History of de Nuestra Senora de Izamal, the Spanish historian Lizana included a detailed look at the early history of the Yucatán. He collected memories that suggested that the earliest inhabitants of the peninsula had come originally from Cuba, where they had settled after leaving Haiti. Other Spanish authors concluded from stories related to them by the Nahua that Chicomoztoc could be found either in Florida or on Cuba.

One possible way of rectifying the situation was to find the Seven Caves. If such a place once existed, it might have continued to be revered even after the ancestors of the Mesoamerican ruling dynasties had departed their homeland. Was there any sacred place or archaeological site that matched the description of the Seven Caves anywhere in Florida, the Bahamas, or the Caribbean?

Just one site fits the description perfectly, and this is Cueva #1, found among a group of “seven caves” at Punta del Este on the Isle of Youth, which lies some 100 kilometers south of the Cuban mainland.

The caves in question were discovered by accident in 1910 by a shipwrecked sailor named Freeman P. Lane. On entering the swampland near the coast, he quite literally stumbled across the complex. Inside he found that the walls and ceiling of the main cave were covered in petroglyphs, described today as “paintings of a celestial and tribal nature.”

Could this obscure grotto be the place of emergence spoken of with such reverence in the creation myths of the Mesoamerican peoples? If so, what might it tell us about the origins of the elite group described as “feathered serpents,” who brought civilization to the various indigenous tribes, and how might this knowledge affect our understanding of Cuba’s role in the Atlantis legend?
Andrew Collins

“Collins has compiled the most thoughtful, comprehensive, and rational book ever written on the controversial topic of Atlantis. Skeptics deny that Plato’s Atlantis existed, but in this book compelling evidence is presented showing that an unrecognized and sophisticated maritime culture existed in the Atlantic during the last Ice Age.”

– Gregory Little, Ed.D., psychologist, explorer, and author of The Illustrated Encyclopedia of Native

“Collins produces a tantalizing pattern of oral and written evidence that Atlantis not only existed but probably was destroyed by a comet some 13,000 years ago.”

“Collins proves an engaging conductor of an exegetical tour of Plato’s writings about a civilization in the Western Ocean that vanished when a natural catastrophe befell its homeland. His book [will] enamor imaginations sparked by the legend of lost Atlantis.”

“Probably the most substantial and well researched book on Atlantis since Ignatius Donnelly.”

“A bold and imaginative attempt to understand the destruction of the legendary city of Atlantis, the creation of Mesoamerican civilization, and the end of the last Ice Age.”