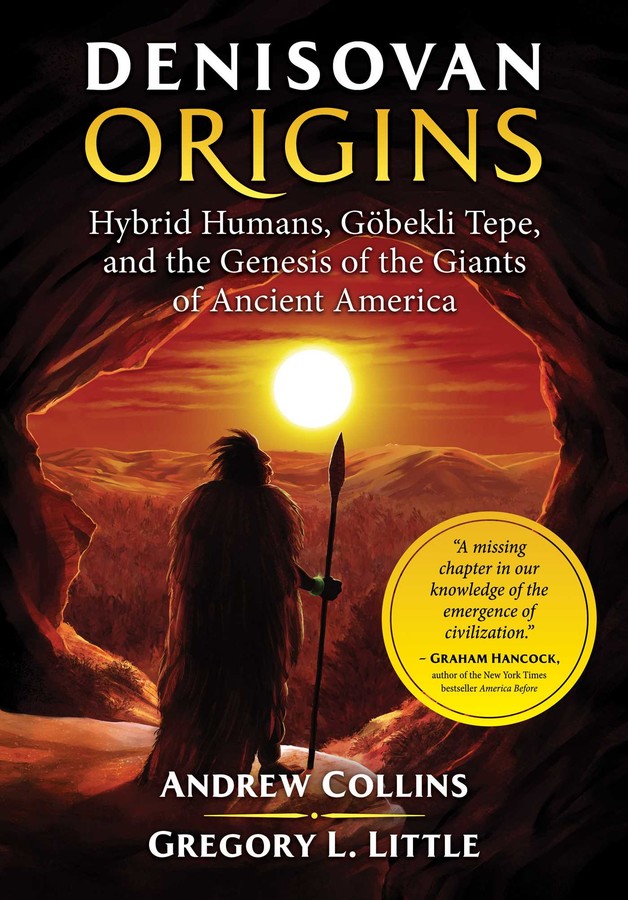 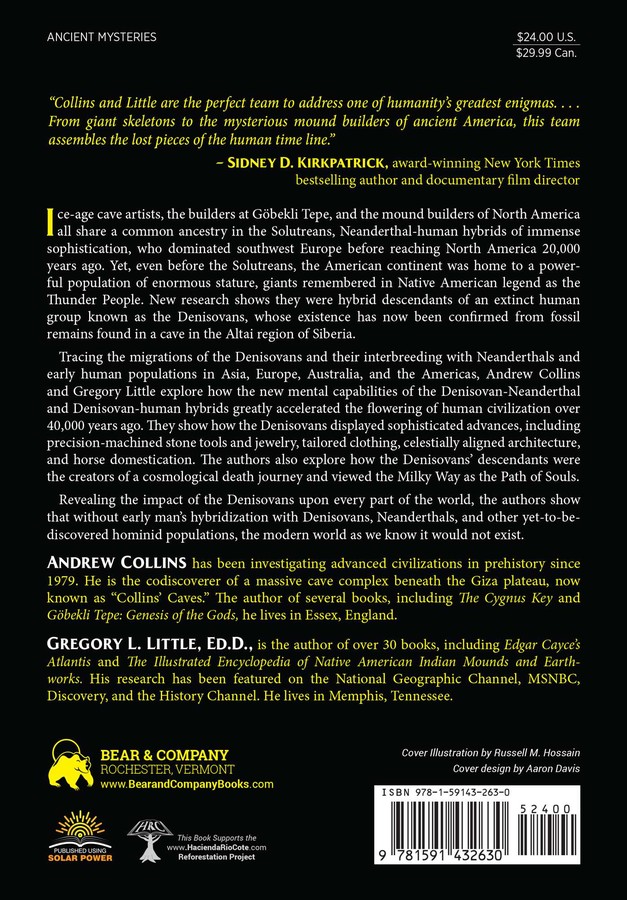 • Traces the migrations of the sophisticated Denisovans and their interbreeding with Neanderthals and early human populations more than 40,000 years ago

• Shows how Denisovan hybrids became the elite of ancient societies, including the Adena mound-building culture

Ice-age cave artists, the builders at Göbekli Tepe, and the mound-builders of North America all share a common ancestry in the Solutreans, Neanderthal-human hybrids of immense sophistication, who dominated southwest Europe before reaching North America 20,000 years ago. Yet, even before the Solutreans, the American continent was home to a powerful population of enormous stature, giants remembered in Native American legend as the Thunder People. New research shows they were hybrid descendants of an extinct human group known as the Denisovans, whose existence has now been confirmed from fossil remains found in a cave in the Altai region of Siberia.

Tracing the migrations of the Denisovans and their interbreeding with Neanderthals and early human populations in Asia, Europe, Australia, and the Americas, Andrew Collins and Greg Little explore how the new mental capabilities of the Denisovan-Neanderthal and Denisovan-human hybrids greatly accelerated the flowering of human civilization over 40,000 years ago. They show how the Denisovans displayed sophisticated advances, including precision-machined stone tools and jewelry, tailored clothing, celestially-aligned architecture, and horse domestication. Examining evidence from ancient America, the authors reveal how Denisovan hybrids became the elite of the Adena mound-building culture, explaining the giant skeletons found in Native American burial mounds. The authors also explore how the Denisovans’ descendants were the creators of a cosmological death journey and viewed the Milky Way as the Path of Souls.

Revealing the impact of the Denisovans upon every part of the world, the authors show that, without early man’s hybridization with Denisovans, Neanderthals, and other yet-to-be-discovered hominid populations, the modern world as we know it would not exist.

A recent DNA study of the Inuit of Greenland showed that a gene that aids the population to survive the Arctic cold was inherited from an extinct human species known as the Denisovans, whose suspected home was central Eurasia, southern Siberia in particular. What this means is that at some point in the distinct past the Paleo-ancestors of the Inuit must have interbred with Denisovans, who had developed this all-important gene across tens of thousands or even hundreds of thousands of years existing in frozen climates.

DNA evidence obtained from modern human populations around the world tells us that the Denisovans, or more specifically their hybrid descendants, were eventually dispersed into several widely different regions of the eastern Eurasian landmass. Denisovan DNA has been found in ethnic groups in central Asia, southern Siberia, Mongolia, China, Japan, Korea, India, the Tibetan plateau, as well as further east in Melanesia, Australia, and the Solomon Islands in the Southern Pacific. Indeed, it is among indigenous populations in Australia and Melanesia, Papua New Guinea especially, that by far the highest admixture of Denisovan DNA is found; this being anything up to 5 percent in some cases. It has also been found among several indigenous groups in North America, Central America, and South America. This tells us that either the Denisovans or their hybrid descendants must have entered the Americas before the final submergence of the Beringia land bridge linking Siberia with Alaska circa 8500 BCE.

In addition to this, it should be pointed out that to date the only known anatomical evidence supporting the former existence of an independent Denisovan population is the discovery of four human fossils found in a single cave in southern Siberia. These are a fingertip of a young girl and a large molar, both of which date to circa 50,000-40,000 years before the present, along with two other teeth that are tens of thousands of years older than the other fossils. All were found during excavations at the Denisova Cave, an archaeological site located in a rocky cliff face high above the Anui River in the Altai Mountains of Altai Krai in Russian Siberia, close to the border with Kazakhstan, China, and Mongolia.

The existence of these fossil remains tells us that the Denisovans must have occupied southern Siberia around 120,000-40,000 years before the present day, since this adequately reflects the date range of the archaeological layers in which these discoveries were made. Where exactly the Denisovans might have thrived before this time remains unclear. They could have existed in southern Siberia for many hundreds of thousands of years, or they could have turned up in the region only shortly before the age of the oldest remains found inside the Denisova Cave. What we do know, however, is that around 40,000 years ago the Denisovans ceased to exist as an independent hominin population, with only their hybrid descendants remaining to continue their legacy through till the present day.

These Denisovan descendants would have included not only Denisovan-human hybrids as modern DNA evidence makes clear, but also Denisovan-Neanderthal hybrids as well. We know this from genetic evidence taken from the toe bone of a young female Neanderthal found within Layer 11 of the Denisova Cave, which dates to circa 70,000-40,000 years before the present. DNA testing of the Neanderthal bone fragment revealed that the immediate ancestors of this female had interbred not only with Denisovans, but also with early modern humans. This occurred most likely in southwest Asia sometime prior to the proposed eastward migration of Neanderthal groups into southern Siberia around 55,000 years ago, or even earlier still.

Returning now to the Inuit population of Greenland, we must ask ourselves how they came to inherit not one, but two Denisovan genes. Known to geneticists as TBX15 and WARS2, they were first identified as Denisovan in origin when the population’s genome was sequenced in 2010. What’s important about these findings is that even though these genes were found to be common among the Inuit of Greenland (and presumably also those of Arctic Canada and Alaska) they are relatively rare among other human groups. Not only does this make it clear that the Inuit interbred with Denisovans, but also that this introgression must have occurred in a region formerly inhabited by this extinct population, or at least their direct descendants.

The Inuit inhabit a vast region spanning the extreme Arctic region of North America in what is today Canada, as well as in Greenland, where they are known as the Kalaaleq. The Inuit share a common ancestry with the Mongolian peoples of eastern and southern Siberia, the later having crossed the Bering Sea from Siberia into Alaska around the end of the last ice age.

Like the Mongolians, Inuit culture is rooted very strongly in shamanistic traditions involving a powerful belief in magic and the supernatural. In addition to this, the Eskimo-Aleut languages (as principally exemplified by central Alaskan Yupik) have been found to share a number of important typological traits in common with the Mongolic and Tungusic languages, along with others of a primarily Altaic origin.

What is more, the Inuit/Aleut/Yupik preserve their own versions of the swan maiden myth. This is used to explain the population’s mythical ancestry from a swan mother, a tradition that almost certainly had its inception in North Asia during the Palaeolithic age. Even today a belief in swan ancestry remains strong among the Altaian peoples of southern Siberia, and also further to the east among the Buryat tribes of the Cis-baikal region west of Lake Baikal. A strong belief in swan ancestry is found also among the Mongolians of Central Mongolia, which is located to the south of Lake Baikal.

With these thoughts in mind it seems likely that the Paleo-Siberian ancestors of the Inuit came originally from North Asia, most obviously southern Siberia, which remains the only confirmed ancient homeland of the Denisovans.

Gregory L. Little, Ed.D., is the author of over 30 books, including Edgar Cayce’s Atlantis and The Illustrated Encyclopedia of Native American Indian Mounds and Earthworks. His research has been featured on the National Geographic Channel, MSNBC, Discovery, and the History Channel. He lives in Memphis, Tennessee.

“Collins and Little are the perfect team to address one of humanity’s greatest enigmas. . . . From giant skeletons to the mysterious mound builders of ancient America, this team assembles the lost pieces of the human time line.”

“Andrew Collins and Greg Little are two of the most respected writers in the ancient mysteries subject. They team up to provide a comprehensive account of the enigmatic Denisovans and their impact on the emergence of modern human society. If they are correct in their findings, as I very much suspect they are, then they have discovered a missing chapter in our knowledge of the emergence of civilization, both in the ancient world and--as I put forward in my own book America Before--in the Americas.”

"Tracing the migrations of the Denisovans and their interbreeding with Neanderthals and early human populations in Asia, Europe, Australia, and the Americas, the authors explore how the new mental capabilities of the Denisovan-Neanderthal and Denisovan-human hybrids greatly accelerated the flowering of human civilisation over 40,000 years ago. They show how the Denisovans displayed sophisticated advances, including precision machined stone tools and jewellery, tailored clothing, celestially-aligned architecture, and horse domestication. Without early human's hybridisation with Denisovans, Neanderthals, and other yet-to-bediscovered hominid populations, the modern world as we know it would not exist."