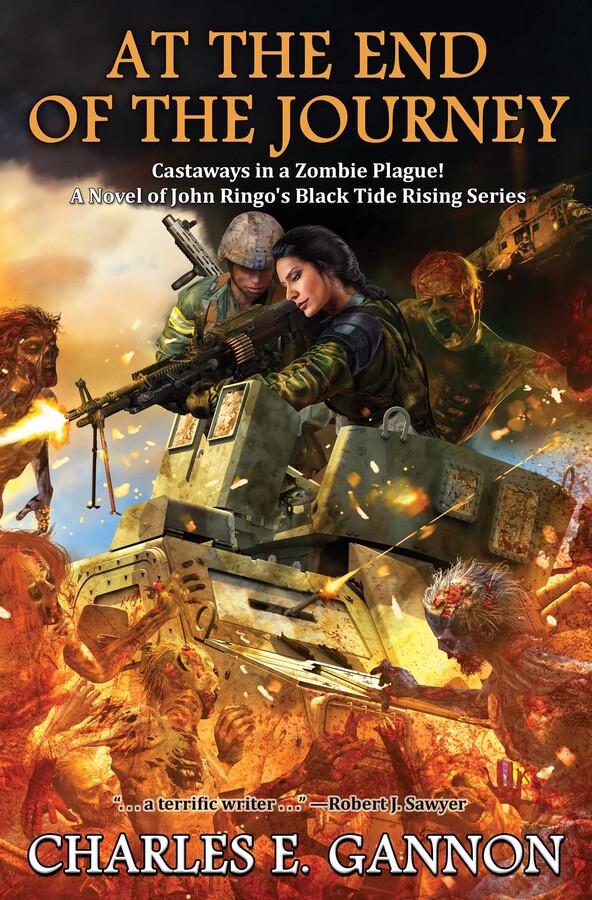 At the End of the Journey

It was supposed to be fun. Six teenagers and their British captain aboard the ketch Crosscurrent Voyager, headed on a senior year summer cruise to excitement and adventure. Then the world as they knew it ended.

A plague spread throughout the globe, killing millions and turning the survivors into cannibalistic rage monsters—zombies, in so many words. Only by putting aside their differences were the young crew able to survive.

Now, they seek others like them, those fortunate souls who have made it through the zombie apocalypse. After all, maybe it's not the end of the world so long as GPS can help survivors navigate deadly terrain, to link up, and maybe—just maybe—ensure the continuation of the human race.

But the Earth’s GPS systems are failing. It falls to those aboard the Crosscurrent Voyager to keep the unthinkable from happening. In order to do so, they must traverse dangerous seas to a European Space Agency complex in French Guiana.

And thousands of infected stand in the way.

If they succeed, humankind has a chance of rebuiling. If they fail, humanity may well be at the end of its journey.

“The plot is intriguing and then some. Well-developed and self-consistent; intelligent readers are going to like it.”—Jerry Pournelle

"Chuck Gannon writes the kind of science fiction we all grew up on: rousing, mind-expanding, pulse-pounding sagas of spaceships and aliens. He's a terrific writer, and we're lucky to have him."—Robert J. Sawyer

"[A] strong [writer of] . . . military SF . . . [much] action going on in his work, with a lot of physics behind it. There is a real sense of the urgency of war and the sacrifices it demands."—Locus

About the Black Tide Rising series:

“Not only has Ringo found a mostly unexplored corner of the zombie landscape, he's using the zombie frame to tackle a broader theme: the collapse and rebirth of civilization. The zombie scenes are exciting, sure, but its the human story that keeps us involved. A fine series.”—Booklist

“Ringo combines humor and horror in this strong series debut, the thinking reader’s zombie novel.”—Publishers Weekly on Under a Graveyard Sky

About the work of Charles E. Gannon:

Caine's Mutiny:
“This is military science fiction the way it’s supposed to be written. . . . All in all, a highly satisfying tale of the Terran Republic that moves the story forward and sets us up for the next chapter, which promises to be interesting at worst and explosive at best.”—SFcrowsnest

Raising Caine:
“Raising Caine unveils a lot of thought-provoking ideas but ultimately this is a space opera adventure. There are space battles, daring emergency landings, desperate quests, hand-to-hand combat, and double-and-triple crosses. It’s an engrossing read. You owe it to yourself to read the two previous books in order. Then enjoy Raising Caine. It’s an intergalactic thrill-ride.”—Fantasy and Science Fiction Book and Audiobook Reviews

“This is science-fiction adventure on a grand scale.”—Kirkus

“[A]n incredibly active book . . . as our protagonists are confronted by the beautiful, terrible, and sometimes lethal variety of the universe and its inhabitants. . . . a whole mess of fun . . . that manages to be scientifically accurate while refraining from excessive wonkiness. Those who value meticulous world-building . . . will certainly have their needs met.”—BN Sci-Fi and Fantasy Blog

“Gannon's whiz-bang second Tales of the Terran Republic interstellar adventure delivers on the promise of the first (Fire with Fire). . . . The charm of Caine's harrowing adventure lies in Gannon's attention to detail, which keeps the layers of political intrigue and military action from getting too dense. The dozens of key characters, multiple theaters of operations, and various alien cultures all receive the appropriate amount of attention. The satisfying resolution is enhanced by the promise of more excitement to come in this fascinating far-future universe.”—Publishers Weekly, starred review

“[D]efinitely one to appeal to the adventure fans. Riordan is a smart hero, up against enormous obstacles and surrounded by enemies. Author Gannon does a good job of managing action and tension to keep the story moving, and the details of the worlds Riordan visits are interesting in their own right.”—Analog

“[O]ffers the type of hard science-fiction those familiar with the John Campbell era of Analog Science Fiction will remember. Gannon throws his readers into an action-packed adventure. A sequel to Fire With Fire, it is a nonstop tale filled with military science-fiction action.”—The Galveston County Daily News

Compton Crook Award winner for best first novel, Fire with Fire:
“Chuck Gannon is one of those marvelous finds—someone as comfortable with characters as he is with technology, and equally adept at providing those characters with problems to solve. Imaginative, fun, and not afraid to step on the occasional toe or gore the occasional sacred cow, his stories do not disappoint.”—David Weber

“If we meet strong aliens out there, will we suffer the fate of the Aztecs and Incas, or find the agility to survive? Gannon fizzes with ideas about the dangerous politics of first contact.”—David Brin

“It’s a grand, fun series of battles and campaigns, worthy of anything Dale Brown or Larry Bond ever wrote.”—Analog

Charles E. Gannon is the author of Compton Crook Award-winning, Nebula-nominated Fire with Fire, Trial by Fire, and Raising Caine in the Caine Riordan series. He is the coauthor with Eric Flint of 1636: The Papal Stakes and 1636: Commander Cantrell in the West Indies in Flint's best-selling Ring of Fire series. With best seller Steve White, Gannon is the coauthor of Starfire series entries Extremis, Imperative, and Oblivion. Gannon is also the author of multiple short stories. He is a member of SIGMA, the “SF think-tank,” which has advised various intelligence and defense agencies since the start of the millennium. A former professor, Gannon lives near Annapolis, Maryland, with his wife and children.

At the End of the Journey