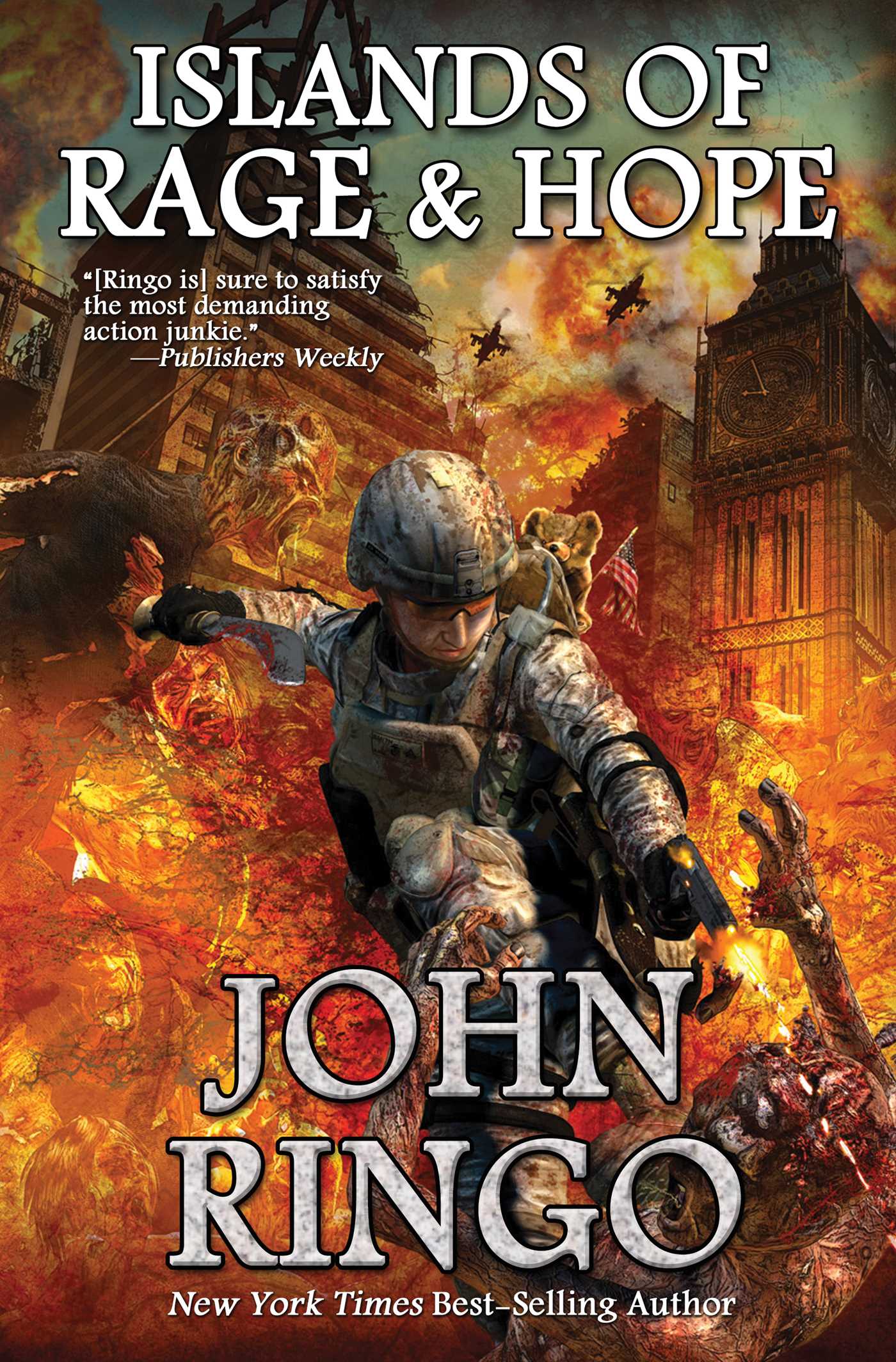 Islands of Rage and Hope

BOOK 3 IN THE BLACK TIDE RISING SERIES FROM THE NEW YORK TIMES BEST-SELLING AUTHOR. Sequel to To Sail a Darkling Sea and Under a Graveyard Sky. A hardened group of survivors fights back against a zombie plague that has brought down civilization.

With the world consumed by a devastating plague that drives humans violently insane, what was once a band of desperate survivors bobbing on a dark Atlantic ocean has now become Wolf Squadron, the only hope for the salvation of the human race. Banding together with what remains of the U.S. Navy, Wolf Squadron, and its leader Steve Smith, not only plans to survive—he plans to retake the mainland from the infected, starting with North America.

The next step: produce a vaccine. But to do that, Wolf Squadron forces led by Smith’s terrifyingly precocious daughters Sophia and Faith must venture into a sea of the infected to obtain and secure the needed materials. And if some of the rescued survivors turn out to be more than they seem, Smith just might be able to pull off his plan.

Once more, exhausted and redlining Wolf Squadron forces must throw themselves into battle, scouring the islands of the Atlantic for civilization's last hope.

About the Black Tide Rising Series:
"Not only has Ringo found a mostly unexplored corner of the zombie landscape, he's using the zombie frame to tackle a broader theme: the collapse and rebirth of civilization. The zombie scenes are exciting, sure, but its the human story that keeps us involved. A fine series."—Booklist

About Under a Graveyard Sky:
“Ringo combines humor and horror in this strong series debut, the thinking reader’s zombie novel.”—Publishers Weekly


About John Ringo:
“[Ringo’s work is] peopled with three-dimensional characters and spiced with personal drama as well as tactical finesse.” —Library Journal

“. . .practically impossible not to read in one sitting . . . exceedingly impressive . . . executed with skill, verve, and wit.” —Booklist

BLACK TIDE RISING SERIES:
Under a Graveyard Sky
To Sail a Darkling Sea
Islands of Hope and Rage
Strands of Sorrow (upcoming)

John Ringo brings fighting to life. He is the creator of the Posleen Wars series, which has become a New York Times best-selling series with more than one million copies in print. The series contains A Hymn Before Battle, Gust Front, When the Devil Dances, Hell’s Faire, and Eye of the Storm. In addition, Ringo has penned the Council War series. Adding another dimension to his skills, Ringo created nationally best-selling techno-thriller novels about Mike Harmon (Ghost, Kildar, Choosers of the Slain, Unto the Breach, A Deeper Blue, and, with Ryan Sear, Tiger by the Tail). His techno-thriller The Last Centurion was also a national bestseller. A more playful twist on the future is found in novels of the Looking-Glass series: Into the Looking Glass, Vorpal Blade, Manxome Foe, and Claws That Catch, the last three in collaboration with Travis S. Taylor. His audience was further enhanced with four collaborations with fellow New York Times best-selling author David Weber: March Upcountry, March to the Sea, March to the Stars, and We Few. There are an additional seven collaborations from the Posleen series: The Hero, written with Michael Z. Williamson, Watch on the Rhine, Yellow Eyes, and The Tuloriad, all written with Tom Kratman, and the New York Times bestseller Cally’s War and its sequels Sister Time and Honor of the Clan, all with Julie Cochrane. His science-based zombie apocalypse Black Tide Rising series includes Under a Graveyard Sky, To Sail a Darkling Sea, Islands of Rage and Hope, and Strands of Sorrow. A veteran of the 82nd Airborne, Ringo brings firsthand knowledge of military operations to his fiction.

Islands of Rage and Hope