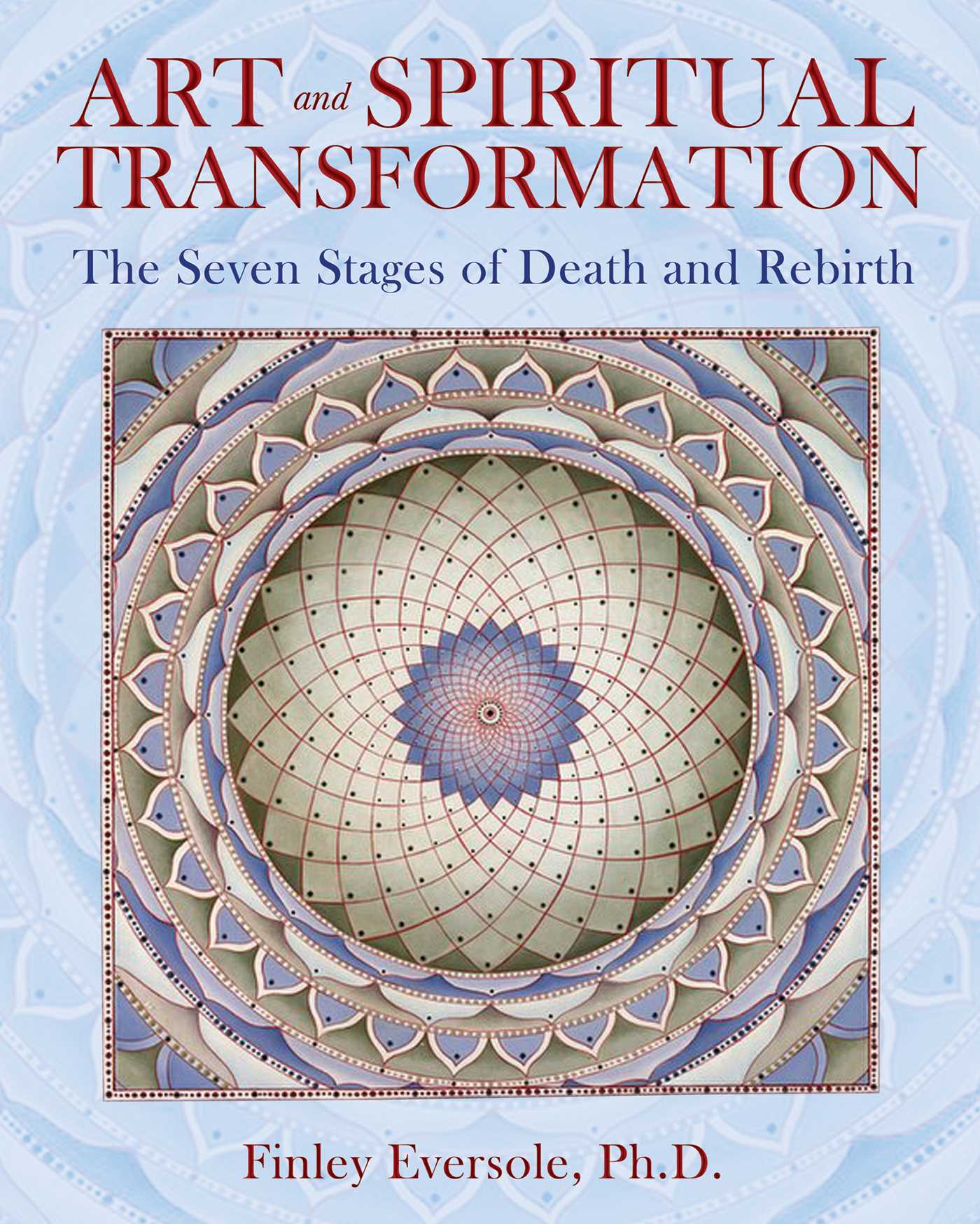 By Finley Eversole
LIST PRICE $17.99
PRICE MAY VARY BY RETAILER

Art and Spiritual Transformation presents a seven-stage journey from the darkened soul to the light of spiritual illumination that is possible through the world of art. Finley Eversole introduces a meditation practice that moves beyond the visual content of an art form in order to connect with its embedded spiritual energy, allowing the viewer to tap in to the deeper consciousness inherent in the artwork and awaken dormant powers in the depths of the viewer’s soul.

Examining modern and postmodern artwork from 1945 onward, Eversole reveals the influences of ancient Egypt, India, China, and alchemy on this art. He draws extensively on philosophy, myth and symbolism, literature, and metaphysics to explain the seven stages of spiritual death and rebirth of the soul possible through art: the experience of self-loss, the journey into the underworld, the experience of the dark night of the soul, the conflict with and triumph over evil, the awakening of new life in the depths of being, and the return and reintegration of consciousness on a higher plane of being, resulting finally in ecstasy, transfiguration, illumination, and liberation. To illustrate these stages, Eversole includes works by abstract expressionists Jackson Pollock, Willem de Kooning, and Mark Rothko and modern visionary artists Alex Grey and Ernst Fuchs, among others, to reveal the powerful and liberating forces art contributes to the transformation and evolution of human consciousness.

“The human soul must suffer its own disintegration, consciously, if ever it is to survive,” wrote D. H. Lawrence.1 Here we have stated the central problem of our age, evidenced in the art of Jackson Pollock (1912-1956). It is the problem of self-loss, willingly undertaken, in order that the deeper spirit of man may come into manifestation. It is not merely a case of play-acting, of pretending to die to oneself. Dying is a radical experience. Our process of disintegration is to explore the furthest limits of human existence; to know the utmost depths and heights, the sorrows and joys available to the human soul. How can we know these if we live in a box? We must be free, and we can be free only if we are willing to risk all! As Janice Joplin sang, “Freedom is just another word for nothing left to lose.” To be free requires letting go of ourselves, our world, our crutches, our gods. It means plunging into the abyss. The journey of transformation begins then with the experience of the abyss. But how can the abyss be represented in a work of art?
The answer lies in the art of Jackson Pollock--the most dramatic painter of the American Abstract Expressionism movement. Pollock came to be known as an action painter. The “drip technique” of his mature style resulted in works of a highly sensitive arabesque design. Pollock approached his canvases, usually stretched out on the floor or tacked to a wall, with a trowel, sticks, brushes, or hands dripping with paint. Immersing himself bodily into the work at hand, he swirled paint with intense speed and force, forming a veritable network of lines, which, were it not for his near-classical sense of balance, might well have passed off the canvas into infinity. Viewing the athletic Pollock at work, one is reminded of Picasso’s statement that every time he began a painting he felt as though he were throwing himself into a void.
The frenzied, Dionysian passion of Number 1, 1948 provides a prime example of Pollock’s particular creative genius. The work employs an all-over style of painting derived from Impressionism and Cubism. Its distribution of lines and color “prevented any climactic emphasis on one point . . . of his essentially light-dark structured canvases.” No one area of the canvas is more important than any other, and the arabesque design is allowed to float freely upon the canvas as though in an empty void, anchored only by the bottom edge of the canvas. The electric speed of Pollock’s marvelously sensitive, swirling light and dark lines and the ice-blue terror of the infinite strike a certain terror in the heart. Only the dark, blood-stained handprints reaching outward toward the edges of the canvas reveal the full extent of the agony and tragic suffering that must have overwhelmed the artist while creating this work.
In Pollock’s Number 1, 1948 we are confronted with a modern, abstract form of Gothic expressionism--a kind of “spiritual orgy.” The center, the organizing principle in classical art, has all but vanished in this piece. At the horizontal midpoint, two-fifths of the way from the bottom of the painting, a nearly imperceptible “point” appears, giving the work a faint visual center. Its weakness, however, testifies to the difficulty Pollock had in keeping “the center” from vanishing altogether from his work. Oft times it did! Pollock struggled heroically to keep a center, often hand-painting it in at the conclusion of a work. In 1960 I began to refer to Pollock’s art as “an art of the broken center.” Pollock’s Blue Poles: Number 11, 1952 is another example of “the broken center,” in which we find eight “poles” inclining at various angles--all at various stages of disintegration or absorption by the wildly dancing light-dark drips.
The center is the organizing principle in any form or space. But what else, what symbolism gives the center the supreme importance assigned to it in all cultures, both primitive and highly evolved? The symbolism of the center concerns the journey inward, where unity, infinity, transcendence, and the Absolute reside. It is the “abode” of the supreme principle of the universe, the One Reality. Contemplation of the center unites one with the deathless essence of the manifest cosmos. “The most ancient and at the same time the most complete of all symbols given by the Wise Ones for the edification of man is the circle with a dot at its center.” Loss of the center means a severance of contact with all that the center symbolizes. Art of “the broken center” is art of alienation, of finitude, of existence in exile--truly existential art. With the vanishing of the center in Pollock’s art we encounter the first stage of transformation--the dismemberment motif.

God is a circle whose center is everywhere and whose circumference is nowhere.
Blaise Pascal
Finley Eversole

Finley Eversole, Ph.D., has lectured widely on the arts, philosophy, metaphysics, and creativity. He served as executive director of the Society for the Arts, Religion and Contemporary Culture from 1966 to 1969, collaborating with Joseph Campbell, Alan Watts, W. H. Auden, and Alfred H. Barr Jr., founder of the Museum of Modern Art. He is the author of Christian Faith and the Contemporary Arts and lives in Birmingham, Alabama.

"This visually appealing work will charm artists, students of psychology, and spiritual seekers."

"Spirituality and art join hands in this seven-stage journey represented in art form and exploring the author's own meditation practice."

"Instead of being simply a well-educated author, who could have easily lost and/or bored many readers by offering highbrow academic-speak, Eversole brings this book to life as he shares his own personal transformations, including his need for therapy at one point, his series of dreams, and his spontaneous mystical experience. Allowing the reader access to his inner life, in a casually intelligent manner, ensures one's rapt attention throughout the reading of this work and shows his inherent bravery in doing so."

"As an artist myself, I am indebted to this wonderful, personal, and touching book by Finley Eversole. It made me return to studying my own work from a new perspective. . . . This book is definitely a 'must have' for any aspiring artist, both of fine arts and prose, as it reveals in very clear terms the link between image, archetype, and reality."

"Art and Spiritual Transformation is a particular treat for anyone with an interest in both spirituality and art. . . . The book includes a particularly interesting discussion by Mr. Eversole on 'Art and the Evolution of Consciousness'. . . . this book offers some stimulating, thoughtful, and insightful comments on which to ponder."

By Finley Eversole
LIST PRICE $17.99
PRICE MAY VARY BY RETAILER