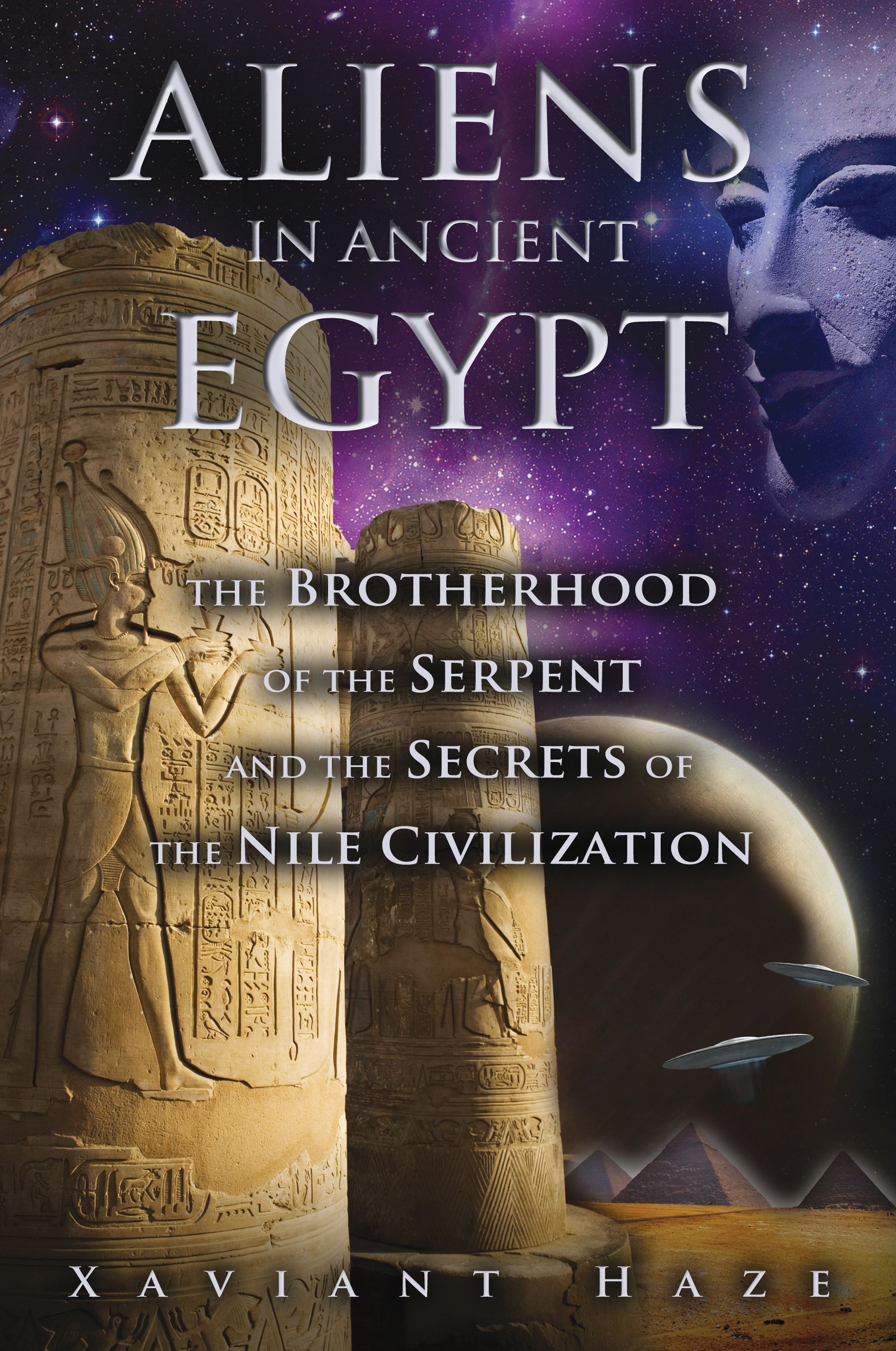 • Explains how Akhenaten was the last pharaoh entrusted with the sacred and ancient alien knowledge of stargates, free energy, and antigravity technologies

• Reveals how the Brotherhood of the Snake, a secret society of reptilian aliens, sought to destroy Akhenaten and suppress the sacred knowledge of the pharaohs

The sophisticated civilization of ancient Egypt arose seemingly overnight, complete with advanced levels of art, agriculture, astronomy, and physics. Then, with the death of Pharaoh Akhenaten, much of this higher knowledge was lost--or suppressed. But evidence of this former Golden Age, the alien visitors behind its rise, and those behind its decline still exists--some of it in plain sight.

Examining the purposefully obscured reign of Akhenaten and Nefertiti, Xaviant Haze explains how they represent the last dynasty with access to the sacred knowledge of stargates, free energy, and antigravity technologies, knowledge handed down from an advanced interstellar race in the remote past. He reveals how the reptilian race known as the Shemsu Hor infiltrated the Egyptian priesthood and banking systems and formed the Brotherhood of the Snake--a secret society set on destroying Akhenaten’s flourishing kingdom and suppressing the sacred knowledge of the pharaohs.

Haze examines the evidence of aliens in ancient Egypt, such as the reptilian beings depicted in the Temple of Hathor and Thutmose III’s alien encounter. He shows how Akhenaten and his family are always portrayed with elongated skulls and explores the connection between ancient aliens and Mars, including the Martian materials used in Egyptian monuments. He explains the original purpose of the pyramids--to transmit uplifting energy throughout the planet to help expand consciousness--and explores how they were decommissioned after the Great Flood of prehistory. He reveals how the original builders of the pyramids foresaw humanity’s fall from the Golden Age and strategically encoded these magnificent structures to wake humanity from the depths of the Dark Ages.

Chapter 8
AKHENATEN VERSUS THE BROTHERHOOD OF THE SNAKE

THE AMARNA PERIOD was a time when the arts and sciences flourished to a point we have yet to catch up to, or at least understand how such heightened talents were possible. This magnificent leap in cultural evolution happened at a time when a mysterious race known as the Shemsu Hor were making their moves behind the scenes of the Egyptian priesthood.

According to the oral traditions of the indigenous Egyptians, the Shemsu Hor were present during the Golden Ages of the original divine kings, and they remained long after these kings descended back into the stars. The Shemsu Hor ruled when the ancient lands of Egypt were tropical and lush. These semi-divine kings inherited a legacy designed to elevate humanity’s consciousness to a level of uplifted, creative awareness in tune with nature and the psychic realms of the universe.

Unfortunately the Shemsu Hor cycled out of the Golden Age and into a Dark Age that saw the world destroyed by epic floods of the last great cataclysm. Those who managed to survive this catastrophe relocated underground and remained undetected while the various other life-forms on Earth took thousands of years to repopulate and rebuild civilization. After nearly being wiped out, the Shemsu Hor were forced to reevaluate their future and the future role that man--inferior to them in knowledge--would play in their plans to regain lost technology. The Shemsu Hor began to plant the seeds of our eventual modern-day world, but instead of molding a society that was fully creative, in tune with nature, and using the pyramids as a tool to raise humanity’s consciousness as it was in past ages, the remaining Shemsu Hor went the opposite route.

The reasons for the turnaround are unclear. What we do know is that the Shemsu Hor morphed into the Brotherhood of the Snake, an organization bent toward enslaving mankind. The Brotherhood of the Snake used the pharaohs as puppet rulers while commanding the real power behind the scenes. They used this power to advance and build the Egyptian empire into a warrior nation with a dominating military that conquered distant lands with bloodshed and violence.

The great quantity of Egyptian symbolism used by the Illuminati such as the Knights Templar indicates just how far back these rulers go. The Shemsu Hor were beings who shared Earth with men, but they were not like us. Known as the followers of Horus, they had a physical form and appearance different from their human cohabitants.

Myths of ancient reptilian beings are prevalent in all the cultures of the world, and the haunting image of the serpent or snake is rife within Egyptian iconography. These images have been misinterpreted for hundreds of years, with skulls unearthed in northern Egypt shining a light on a shocking revelation: the Shemsu Hor were either reptilian or human-reptilian hybrids. The topic of the reptilian alien is the most lauded, criticized, and hated branch of the ancient astronaut theory tree.

Professor Walter Emery, an archaeologist with more than forty years of field research, found evidence the Shemsu Hor existed in northern Egypt. Emery made a strange discovery one day while digging in Saqqara in the 1930s. After spending weeks excavating in the dry desert air, Emery cleared off the dirt and stared down at skeletons that immediately challenged everything he had been taught about ancient Egypt.

found in certain tombs the remains of people who lived in pre-dynastic times in the north of Upper Egypt. The features of these bodies and skeletons are incredible. The skulls are of abnormal size and are dolichocephalic, i.e., the cranium as seen from above is oval, and is about 25% longer than it is wide. Some skulls show no sign of the usual sutures. The skeletons are larger than the average for the area and especially the skeletal frame is broader and heavier. He did not hesitate to identify them with the “Followers of Horus” and found that in their lifetime they filled an important priestly role.

More links to the mysterious Shemsu Hor were found in Iraq at an archaeological site dubbed Tell Arpachiyah, a prehistoric city situated about five miles from Nineveh. Excavated in 1933 by Max Mallowan and his mystery-novel writing wife, Agatha Christie, the pair sifted through numerous graves of the strange Halaf and Ubaid. These two ancient Neolithic cultures can be dated as far back as 4600 BCE, and, like Emery’s discovery in Egypt, some skeletons of the Ubaid had strange, elongated skulls.

The Ubaid cemetery and the surrounding archaeological area revealed other astonishing relics associated with the Shemsu Hor, including pottery with serpent-headed women and, most bizarre of all, ancient statues: figurines with clear reptoid facial features and elongated skulls.
Xaviant Haze

Xaviant Haze is a researcher of ancient manuscripts and alternative history, exploring and documenting his findings on lost cities and the myths of the pre-diluvian world. The coauthor of The Suppressed History of America, he lives in Arizona.

“A unique contribution to the extensive literature on Egyptology, adding an extraterrestrial element, along with helpful cross cultural comparisons.”

“Our fascination with history, with who we are and where we came from, drives the quest for knowledge that Xaviant Haze displays in this stunning culmination of his own years of intense research and inquiry. Delving in to the ancient Egyptian culture, Haze questions our assumptions of human history with new and innovative ideas of how the advancement of knowledge may have occurred, and who or what was behind it. . . .This book is a guided tour of a civilization that continues to intrigue and define the entire human race. Aliens in Ancient Egypt is highly recommended reading for those who want to know how the distant past can shape the present--and the future--of humanity.”

– Marie D. Jones, author of Viral Mythology: How the Truth of the Ancients Was Encoded and Passed Down

“Contains powerful evidence that advanced beings (ABs) were the creators of Egypt’s highly developed civilization before the worldwide cataclysm of 11,500 BP. This intervention narrative involving a space-traveling species is well documented, written with intelligent and logical reasoning. The reader will never again accept the human story found in conventional textbooks. The author deftly weaves recent discoveries in archaeology with 21st-century theories in energy, genetics, astronomy, reincarnation, and space travel--raising the possibility that the next advanced civilization in our galaxy will be human.”

“Aliens in Ancient Egypt presents an interesting, entertaining, and instructive overview of diverse references that suggest the presence of nonhuman influences on human development in ancient times. Xaviant Haze does a great job of helping us see Egyptian textual passages with fresh eyes, in particular through his comparisons to the writings of ancient India and the first-contact experiences of primitive tribal groups in more recent times.”

– Laird Scranton, author of The Science of the Dogon

“This fascinating book shines a spotlight onto arguably the most mysterious period of ancient Egyptian history and asks some profound questions about the origins of this culture’s sacred knowledge and the true identity of their gods. Packed with intriguing theories, this book will appeal both to those with an interest in ancient mysteries and to believers in extraterrestrial visitation.”

“This line of research is new thinking and will help us look deeper into our past and true human origins.”

– Jason Martell, founder of XFacts.com and author of Knowledge Apocalypse

“In Aliens in Ancient Egypt, Xaviant Haze lays out the proof for alien intervention in such a manner the evidence becomes irrefutable. We have been waiting for this book for a long time.”

– Jay Weidner, renowned filmmaker, hermetic scholar, and author of The Mysteries of the Great Cross of

“Aliens in Ancient Egypt is a thought-provoking study that may indeed help many seekers of alternative wisdom and reality fulfill their quest. This latest work by Xaviant Haze is set to light the fuse of even more controversy, and that in itself is a very good thing!”

– Pat Regan, author of UFO: The Search for Truth

“Xaviant Haze writes a fascinating inquiry into mankind’s distant past. This book should be in the library of every serious researcher!”

– Steven Myers, author of Lost Technologies of the Great Pyramid

“A much-needed, new, and fresh exposé regarding the alien mysteries of ancient Egypt.”

– Mike Bara, author of Ancient Aliens on the Moon and coauthor of Dark Mission

“The history of ancient Egypt, though having been studied intensely for more than 100 years, has generally ignored the mysterious representations of elongated skulls, especially those of Akhenaten, the Amarna family, and Osiris. In Aliens in Ancient Egypt, Xaviant Haze explores this perplexing phenomenon and the possible connection between the royal bloodlines of Egypt with off-planet visitations in the distant past.”

– Brien Foerster, coauthor of The Enigma of Cranial Deformation

“Aliens in Ancient Egypt authored by Xaviant Haze. is de facto, a rich and authoritive source of information, and a learning tool that should be considered by colleges and universities, and added to their curriculum and research libraries.”

“Best book of the Month. You should read the book with an open mind; it is well-structured, intelligently written, and above all, an eye-opener.”

“A must for any new age collection strong in ancient history, and for Egyptian history holdings!”