The Dandelion Dynasty quartet chronicles the emergence of a new nation in the aftermath of the fall of a corrupt empire. Set in a secondary fantasy world in which the heroes are engineers, not magicians, it melds East Asian and Classical philosophies and traditions, spans multiple generations and continents, and builds a new mythology from the actions of its heroes. 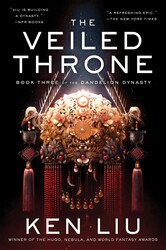 The Veiled Throne
By Ken Liu
Book #3
With the invasion of Dara complete, and the Wall of Storms breached, the world has opened to new possibilities for the gods and peoples of both empires as the sweeping saga of the award-winning Dandelion Dynasty continues in this third book of the “magnificent fantasy epic” (NPR).

Coming Soon from The Dandelion Dynasty