Join Amelia, Reggie, Rhonda, and Pajamaman (The Gathering of Awesome Super Pals) in the Eisner-nominated Amelia Rules series! Hilarious and heartwarming, the Amelia Rules! series features a cast you’ll never forget; especially the clever, whip-smart Amelia who is as relatable as she is lovable. As long as you stay on her good side, that is! 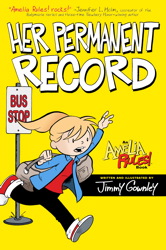 Her Permanent Record
By Jimmy Gownley
Amelia embarks on her most epic adventure yet in this final addition to the Amelia Rules! graphic novel series.

From surviving her parents’ divorce, to withstanding the terror of Joe McCarthy Elementary, to handling devastating crushes (not-so-)gracefully, Amelia Louise McBride has weathered her...