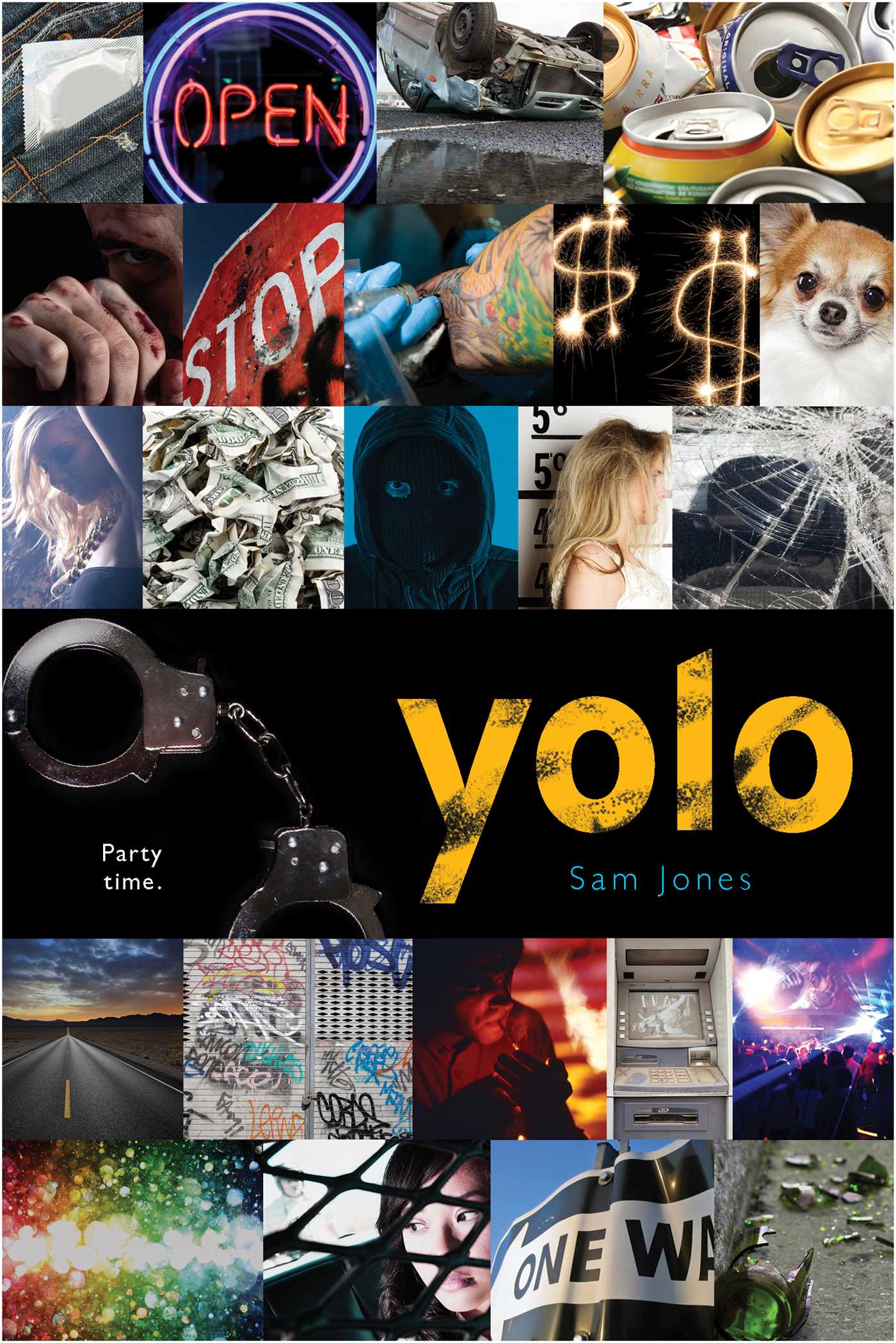 By Sam Jones
LIST PRICE $17.99
PRICE MAY VARY BY RETAILER

One day. One party. One motto: you only live once. In the tradition of wtf and fml, a crazy story of three friends and a road trip gone wrong right.

Emily and her best friends, Ana and Brandon, know it should only take half a day to get to the mountains, where the Stein twins are hosting a massive Spring Break party at their parents’ mansion. The road trip should be a breeze; the driving itinerary even includes several stops along the way, the first being a bite to eat at a real, classic roadside diner.

And that’s where everything falls apart.

Throw in a couple of criminals, an accidental thief, and a miniature drug lord, and suddenly the half-day trip is gonna take a little longer. Add a Chihuahua, some crazy grandparents, and a hot pool-hall boy named Chris...and maybe the journey to the party will end up being better than the party itself…

yolo chapter 1
Emily O’Brien slipped behind the steering wheel of the late-model SUV her father had given her last year for her sixteenth birthday and turned the key in the ignition. She was relieved to see that the clock on the dash glowed exactly eleven a.m. Emily was not the type of person who enjoyed running behind schedule, nor was she the type of person who might frequently use the words “late-model SUV.” Her father, however, did both of these things with alarming regularity.

But being late and using sort-of-douchey phrases to describe things was not the end of the world. Still, as she pulled out of the driveway and headed toward Ana’s house, she was glad to have a break from her father’s eccentricities. Just this morning while she’d been trying to get packed and out of the house, he was underfoot the entire time: in the kitchen blending a carrot-kale protein shake for breakfast, in the laundry room arranging his bike shorts on the drip-dry rack, in the hallway checking out his abs in the full-length mirror by the guest bath. Finally, she just pushed by him with her weekend bag.

“Shouldn’t you be working by now?” Emily asked.

“Self-employment, babe-EEE.” He waggled the “hang loose” sign back and forth, his thumb and pinky stretched out. “Membership has its privileges.”

Having a self-employed father is fine during the school year, she’d explained to her best friend, Ana Rodriguez. But now that junior year was finally over, the past few days felt like she’d been hanging out with a guy who’d stayed in college too long.

“Where you headed?” he asked.

“Text me when you get there, babe.”

“C’mon, Em! Lighten up! You’re on your way to a fun weekend at that beautiful house in the mountains. Tell Mr. Stein I said ‘WhassUUUUUP?’ ”

“I will do no such thing.” Emily sighed. “I will tell him you send your regards.”

“Don’t!” Emily tried to cut him off, running for the door that lead into the garage from the kitchen, but it was too late.

“YOLO!” her dad had crowed as she fled with her bag. As Emily closed the door behind her, she heard him yell out the definition, as he always did: You only live once!

Emily turned up the volume on her new summer playlist, hoping to tune out the embarrassing sound of her father’s voice echoing in her head. It was worse when he did this in front of her friends—and especially mortifying when he had done it in front of Kyle. Her father and Kyle had acted like stoned frat boys before she and Kyle called it quits. Kyle had been smoking way too much weed, and the thought of dating a total burnout the summer before senior year was more than Emily could take. Plus, she was tired of every man in her life telling her to “lighten up” and “take it easy.”

The simple truth was that junior year had been hard. You try to lighten up while taking AP chemistry—that’s what she wanted to tell her dad and Kyle. It was like running a gauntlet that never seemed to (a) end or (b) get any more interesting. It was hard enough to study difficult subjects, but chemistry was one of those academic situations Emily found so boring she could barely pay attention. Still, she had studied until she thought her eyeballs would melt and her brain would come sliding out of her right ear. She’d gotten an A-minus by a single percentage point on the final exam, but she’d had to sacrifice nearly every social engagement for the last two months of school to pull it off.

The only thing she hadn’t ditched was prom, and Kyle got so drunk at the after party that he had barfed in her purse. It was at that precise moment last month, standing by Ana’s pool with a clutch full of Kyle’s puke, that Emily had for once decided to take her father’s cool dude advice: Let go! Don’t hold on so tight to every freaking thing.

The thing she let go of first was Kyle.

Ana had helped her get Kyle into a cab, and then driven her home. After that, it was weird at school for the last month of classes. Kyle kept puppy-dogging her around campus, begging her to take him back. At first Emily was friendly but firm:

“Not going to happen, Kyle. I have a lot of cute purses. None of them are designed to carry vomit.”

Then after a particularly trying week in which final projects were due in every class and she’d refereed yet another screaming match between Ana and her other best friend, Brandon, (this time over pizza toppings), she made the mistake of watching a movie on cable with Juliette Lewis and Giovanni Ribisi. They both played differently-abled young people who fell in love, and by the end, she was a puddle on the living room carpet. In a moment of weakness she’d texted Kyle to come over, and he’d appeared at her doorway in five minutes. He smelled like pot, but his smile made her knees weak. Emily’s dad was already in bed, and they’d spent three hours on the couch together that night—only one of them with their clothes on.

At that point Kyle started acting like they were back together again: meeting Emily at her locker every day and texting a lot. For the past few weeks, he’d been begging her to “make it official” again. Emily was torn. People did change, after all. That much was clear when her mom had left a few years back. Frankly, she wasn’t sure if it was fair to ask Kyle to change—especially since he was always telling her to “chillax.” God, she hated that nonword hybrid. It made her skin crawl every time he said it. She was so tired of her focus being mocked, the subject of eye rolls and derision—especially from a cute stoner who couldn’t even spell the word “derision,” much less use it in a sentence.

See? There she was, looking down on Kyle again. And that was at the heart of her dilemma of whether to get back together with him again or not: respect. At the end of the day Emily was unsure that they had any respect for each other. In a way, she felt that they both wanted the other to be somebody different. On the flip side Emily didn’t know if she had the strength to truly make things final with Kyle. He could be very persuasive, and so she’d taken the path of least resistance and just started ignoring his texts and phone calls. Her silence had only served to increase the frequency and intensity of Kyle’s attempts to contact her. She’d received two more texts just in the time it had taken to get to Ana’s neighborhood.

As she pulled into Ana’s driveway, the clock on the dash read 11:07. Three minutes ahead of schedule. Emily’s goal was to be pulling onto the highway at noon. The on-ramp was only five minutes from Ana’s house, but Emily knew it would take a minimum of ten minutes just to get Ana focused enough to leave her front door the first time, and another five to seven minutes of trips back inside to procure forgotten items before Ana would finally strap on her seat belt. Plus, they had one additional stop to make.

The schedule was tight, but Emily smiled when she thought about this weekend and finally being on the road toward Jacob and Madison’s big house in the mountains. The view from the infinity pool alone was worth the drive. One thing was certain: The twins knew how to throw a party. Jacob could DJ a complete meltdown into existence, spinning tracks that made the whole pool deck pulse like a beautiful wild animal with a biological imperative to bump and grind. Madison was the queen of convincing the sweetest, cutest college guys Emily had ever seen to wear as little as possible in the hot tub. What’s more, Madison was never greedy or jealous, one of those rare pretty girls who isn’t as crazy as she is pretty. She was all about spreading the wealth, literally and figuratively.

Emily smiled as the song ended. She jumped out of the car, the tune still bouncing in her step as she ran up the front-porch stairs and rang Ana’s doorbell.
Sam Jones

Sam Jones has been on several one-day road trips, loves a good party, has never robbed a convenience store, and does not have a pet Chihuahua.

By Sam Jones
LIST PRICE $17.99
PRICE MAY VARY BY RETAILER