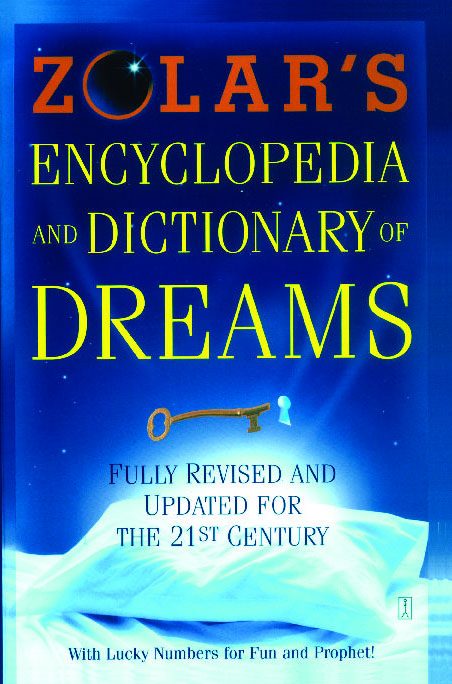 Zolar's Encyclopedia and Dictionary of Dreams

Fully Revised and Updated for the 21st Century

By Zolar
LIST PRICE $28.99
PRICE MAY VARY BY RETAILER

The completely revised and updated edition of the classic, bestselling guide to dream interpretation.

In the first major revision of the encyclopedia that has sold half a million copies worldwide, Zolar, the acclaimed "Dean of Astrology" (The New Yorker), has created the indispensable bedside reference for today's dreamers, reflecting the changes that have affected our waking hours and inevitably influence the content and significance of the messages we receive while we sleep. Looking at new cultural trends, work and social patterns, technologies and means of communication, Zolar reveals the meanings of dreams about cell phones, computers, cyberspace, beepers and much more. His concise and incisive explanations of such classic dreams as meeting a redheaded stranger, flying without wings and trying to comfort a crying baby are here as well, while obsolete subjects -- like girdles, gleaners and grenadiers -- have been eliminated. To complement each dream category a lucky number has been added for this new edition.

With interpretations for more than 20,000 dreams, Zolar's Encyclopedia and Dictionary of Dreams offers you the opportunity to uncover the secrets hidden in your dreams and to act on the wisdom -- or respond to the warnings -- they contain.

Is there anyone reading this who hasn't had them? Do you remember the very first dream you ever had? I don't! But I do remember dreaming as a very young child. Much like Chuang Tze, early on I became aware of the fact that there was a part of me that apparently lived not in one, but in two worlds. Still later on I came to understand that not only could I move between one and the other, but that I could actually live between the two, as well.

In time I came to realize that existing in such a state was not a blessing at all, but rather a kind of curse that accompanied special people, whom Colin Wilson would one day write about, calling them "outsiders."

And with this understanding also came the realization that if I had a religion at all, it was not the Methodism of my youth, but rather that I was a "mystic," the roots of which word originally meant "to be silent," no doubt referring to the inability of man to put into words his experience of the ineffable.

You see, it is not as the ancient Hebrews would have us believe, that it is a blasphemy to utter the name of Yahweh. But rather, that to do so is an impossibility...for the moment one speaks the name of God, he is no longer that which is being spoken of. Hence, the Taoists would write, "The Tao which can be spoken of is not the real Tao!" It is this very idea that led the mystic Joel S. Goldsmith to coin the phrase "The Infinite Invisible" to describe that deity which he perceived.

So you see, it is only in the dream state that we as mortals ever begin to come close to even the remotest comprehension of who and what our gods may very well be. This truth was well known in ancient times and led to the creation of "sleep temples," which allowed those judged ill to regain their health through divine intervention. It was taught that during sleep, the god comes to you, bringing his or her healing touch. Of all the gods and their temples thought of in this way, the sanctuary of Asklepios was held in the highest reverence, becoming the very apex of Greek healing practice.

But it was not until I met Erlo van Waveren, one of Carl G. Jung's direct disciples, that I truly came to understand how very important dreams were. As the analysand of van Waveren, I grew to appreciate and rely on the unfiltered wisdom that I could obtain from my dreams, if I could but perceive the meaning behind the various symbols, which would present themselves night after night. And it is here that the present work becomes important.

Over half a century ago, Bruce King, who founded Zolar Publishing, gathered together whatever ancient dream books could be found and created what would unknowingly become an indisputable classic in occult literature. Such quickly took its place by the bedsides of rich and poor worldwide.

And in fact, of all the Zolar books in print, it is the Encyclopedia and Dictionary of Dreams that is most often treasured and passed down from parents to children, much like a family heirloom.

In this present edition, I have, with the help of the skillful editing talents of Nadine Daily Papon, removed ambiguities and duplications found in the first edition and have alphabetized the meanings within dream descriptions to make them more quickly accessible. And to make them even more useful, we have added lucky numbers for each dream category.

And, of course, should any of these numbers prove "prophetable," I will not be offended by the receipt of any cashier's checks that readers may wish to tender with their "thank you" notes!

Seriously...enjoy, cherish, and have as much fun with this book as I have had in presenting it to you. And for those of you who may wish to reach me personally, or who may be seeking instructions in metaphysics or the occult, my contact information follows below.

Finally, not to be forgotten, I offer a hats-off to Dominick Abel, my ever-tireless literary agent, and to Amanda Patten at Touchstone/Fireside, without whom this major undertaking would have not seen dawn's early light. 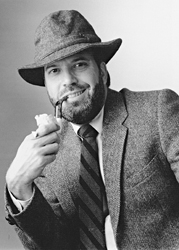 Zolar is the author of Zolar’s Encyclopedia of Ancient and Forbidden Knowledge; Zolar’s Book of Dreams, Numbers and Lucky Days; Zolar’s Encyclopedia and Dictionary of Dreams; Zolar’s Starmates; and Zolar’s It’s All in the Stars. For more than half a century, the name Zolar has been synonymous with some of the finest books on astrology, dreams, and the occult ever written.

Zolar's Encyclopedia and Dictionary of Dreams

Fully Revised and Updated for the 21st Century

By Zolar
LIST PRICE $28.99
PRICE MAY VARY BY RETAILER

More books from this author: Zolar