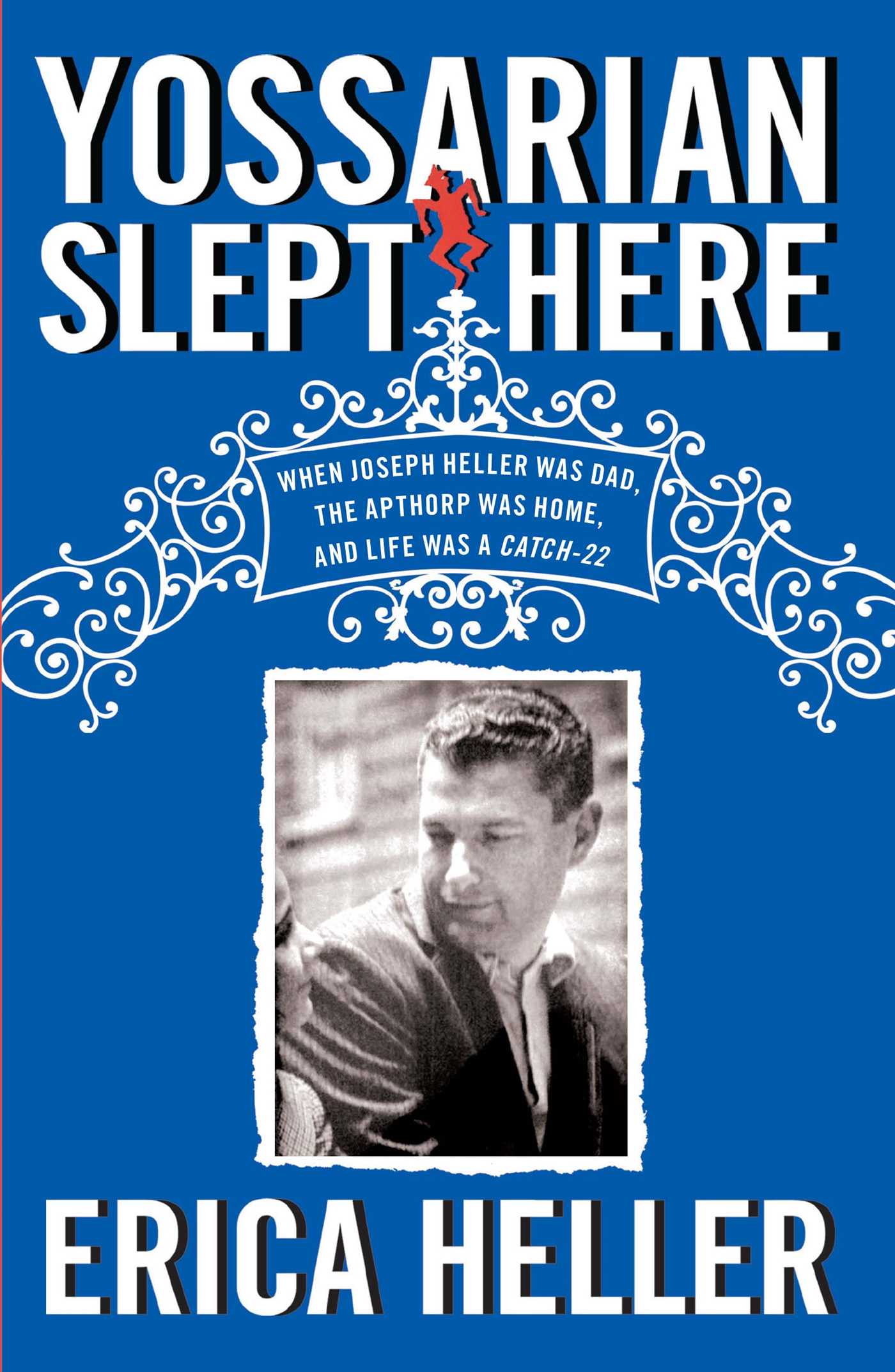 When Joseph Heller Was Dad, the Apthorp Was Home, and Life Was a Catch-22

By Erica Heller
LIST PRICE $16.00
PRICE MAY VARY BY RETAILER

THROUGHOUT ERICA HELLER’S LIFE, when people learned that Joseph Heller was her father, they often remarked, “How terrific!” But was there a catch? Like his most famous work, her father was a study in contradictions: eccentric, brilliant, and voracious, but also mercurial, competitive, and stubborn, with a love of mischief that sometimes cut too close to the bone. Being raised by such a larger than- life personality could be claustrophobic, even at the sprawling Upper West Side apartments of the Apthorp, which the Hellers called home—in one way or another—for forty-five years.

Yossarian Slept Here is Erica Heller’s wickedly funny but also poignant and incisive memoir about growing up in a family—her iconic father; her wry, beautiful mother, Shirley; her younger brother, Ted; her relentlessly inventive grandmother Dottie—that could be by turns caring, infuriating, and exasperating, though anything but dull. From the forbidden pleasures of ordering shrimp cocktail when it was beyond the family’s budget to spending a summer, as her father’s fame grew, at the Beverly Hills Hotel, Erica details the Hellers’ charmed—and charmingly turbulent— trajectory. She offers a rare glimpse of meetings with the Gourmet Club, where her father would dine weekly with Mel Brooks, Zero Mostel, and Mario Puzo, among others (and from which all wives and children were strictly verboten). She introduces us to many extraordinary residents of the Apthorp, some famous—George Balanchine, Sidney Poitier, and Lena Horne, to name a few—and some not famous, but all quite memorable. Yet she also manages to limn the complex bonds of loyalty and guilt, hurt and healing, that define every family. Erica was among those present at her father’s bedside as he struggled to recover from Guillain-Barré syndrome and then cared for her mother when Shirley was diagnosed with terminal cancer after the thirty-eight-year marriage and intensely passionate partnership with Joe had ended.

Witty and perceptive, and displaying the descriptive gifts of a born storyteller, this authentic and colorful portrait of life in the Heller household unfolds alongside the saga of the family’s moves into four distinctive apartments within the Apthorp, each representing a different phase of their lives together—and apart. It is a story about achieving a dream; about fame and its aftermath; about lasting love, squandered opportunities, and how to have the best meal in Chinatown.

A Jewish wife will forgive and forget, but she’ll never forget what she forgave.

“Joe who?” my mother asked without guile from her hospital bed. She’d just read a card that had been tucked into a glorious bouquet of freshly delivered flowers.

“Joe Heller,” I told her. I was flabbergasted that she didn’t know or couldn’t guess, but then we were in Sloan-Kettering. It was 1995, she was dying, and although my parents had been married for thirty-eight years, they had had a particularly acrimonious divorce twelve years before and had not spoken since. So perhaps the fact that she was scouring her brain for non-Hellerian Joes she might know was not really all that startling. I reached over for the card and read aloud: “My darling Shirley,” it began, “I am so sorry. Joe.” I handed it back to her.

When I told her who’d sent the flowers, she spoke slowly and without rancor. “Well, he is a sorry soul,” she pronounced wearily, crumpling up the card and dropping it into the yellow plastic trash bin on the floor beside her bed. “But he sent you flowers,” I pushed, somehow hoping for more. “Th ey’re from Dad. Don’t you think they’re nice?” I pestered, leading the witness. She stared at me, unruffled and unimpressed. “I get it. I understand,” she said. “But really, how wildly would you like me to celebrate this? Should I hire jugglers?” Then she muttered something that I made her repeat twice because it was said so faintly, she closed her eyes and we never spoke of the flowers or of my father again.

By then my mother was bald and terribly frail. After her initial diagnosis a year and a half earlier, I’d moved back in with her at the Apthorp, the apartment building where I’d grown up, decamping from the Upper East Side to properly care for her for as long as was needed.

From the day I moved back in, whether my mother was home or, as she was with increasing frequency, in the hospital, my father was too stubborn and too shaken by the gravity of her illness to call or speak to her. Instead, he called me. Night after night he inquired about her with an array of questions that never varied: Had she eaten? Had she gotten fresh air that day? Was she able to sleep? What were the doctors saying? Had she taken all of her medications and had I remembered to give her all of her vitamins? What was her mood? Every night I answered him, increasingly baffled by his persistent interest and concern, but not, I suspect, as baffled as he himself may have been.

As my mother got sicker, had brain surgery, lung surgery, chemo, and radiation, I could hear how much more difficult it was for him to keep the fear from creeping into his voice. He knew we were going to lose her. It was only a question of when. Officially, they had lost each other many years before, of course, but it was obvious how deeply he was tied to her. They were still uncannily connected.

Even after years of silence, the truth remained that there’d never been anyone who’d known or understood each of them better than the other. There never would be. With Mom’s death, this aspect of my father’s life would be obliterated, and I sensed that fact very strongly during that time. To me, it could easily be seen lurking just beneath the surface—a surface customarily guarded and closed and, for the most part, ineluctably indecipherable.

When my father called me those nights he was not the blustery, famous author; the gruff, arrogant big shot; the smug, cocky fellow who sometimes showed up to friends’ cocktail parties for the sheer fun of insulting them. He wasn’t the caustic, clever master of the verbal arabesque who for years had answered the question “How come you’ve never written a book as good as Catch-22?” with the sly, Talmudic response to put any other to shame: “Who has?” he’d ask, genuinely wanting to know. He was not bombastic or self-satisfied during those nightly calls. He was only sad. He just wanted to talk, and I let him.

Then, about a month before my mother died, when she had gone into Sloan-Kettering for what seemed as if it might be the last time, one night when Dad called I was simply too exhausted to hold everything back that I’d been wanting to say to him ever since she’d first been diagnosed. I had never found the courage or the proper words to use with him before.

I blurted out that he simply had to communicate with her again now, or he would never forgive himself. “How will you live with yourself if you don’t? How will you sleep at night?” I asked in an uncustomarily loud tone. He listened silently, and I could picture him sitting in his lemon-yellow study out in East Hampton where he lived, seething at the very notion of being scolded by his daughter. “Call. Write to her. Send flowers. Do something. There isn’t much time left, and if you don’t, I think you’ll always be sorry,” I fumbled, suddenly aware of and horrified by my own stridence. Now, understandably, there was angry silence. When Dad finally spoke, he was petulant, childlike. “I don’t need you to tell me what to do,” he growled, hanging up before I could respond.

It was the very next day when, sitting in my mother’s hospital room, there had been a knock at the door, and an orderly had entered with the exquisite bouquet of flowers for Mom. From Dad.

When I arrived home that night the phone was already ringing. He wanted to know if she’d gotten the flowers and if so, had she liked them. I assured him that they’d arrived and had been magnificent. “Well, what did she say?” he asked with some urgency, and then it was my turn to be silent.

After the divorce, for years my father had begged, cajoled, and finally actually offered me a hefty bribe of ten thousand dollars in cash if I would only tell him my mother’s secret pot roast recipe. It was handed down to her from her mother, my grandmother Dottie, and the meal was for him like kryptonite. It always made him groggy, feeble, and positively stupid with glee, turning his knees to jelly.

When my mother had closed her eyes in the hospital after receiving his flowers, what she had muttered to me, in fact, was: “No matter what, don’t ever give him the pot roast recipe,” and with that, she’d drifted off to sleep. I did not share this with him, take a sorrowful moment when he was so uncharacteristically humbled and vulnerable and make it even more difficult.

On the other hand, he never did get that recipe. 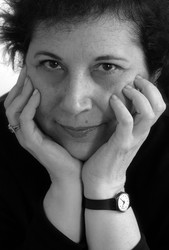 When Joseph Heller Was Dad, the Apthorp Was Home, and Life Was a Catch-22

By Erica Heller
LIST PRICE $16.00
PRICE MAY VARY BY RETAILER