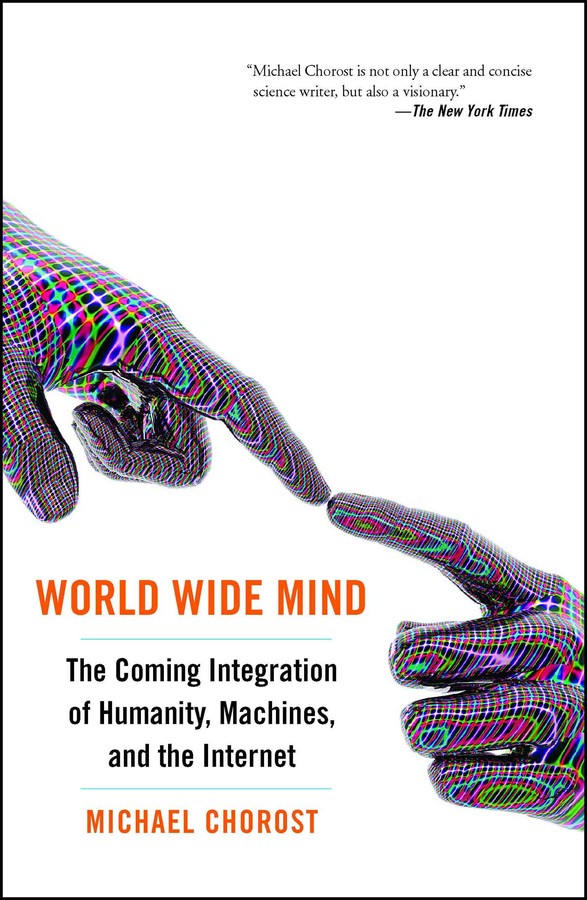 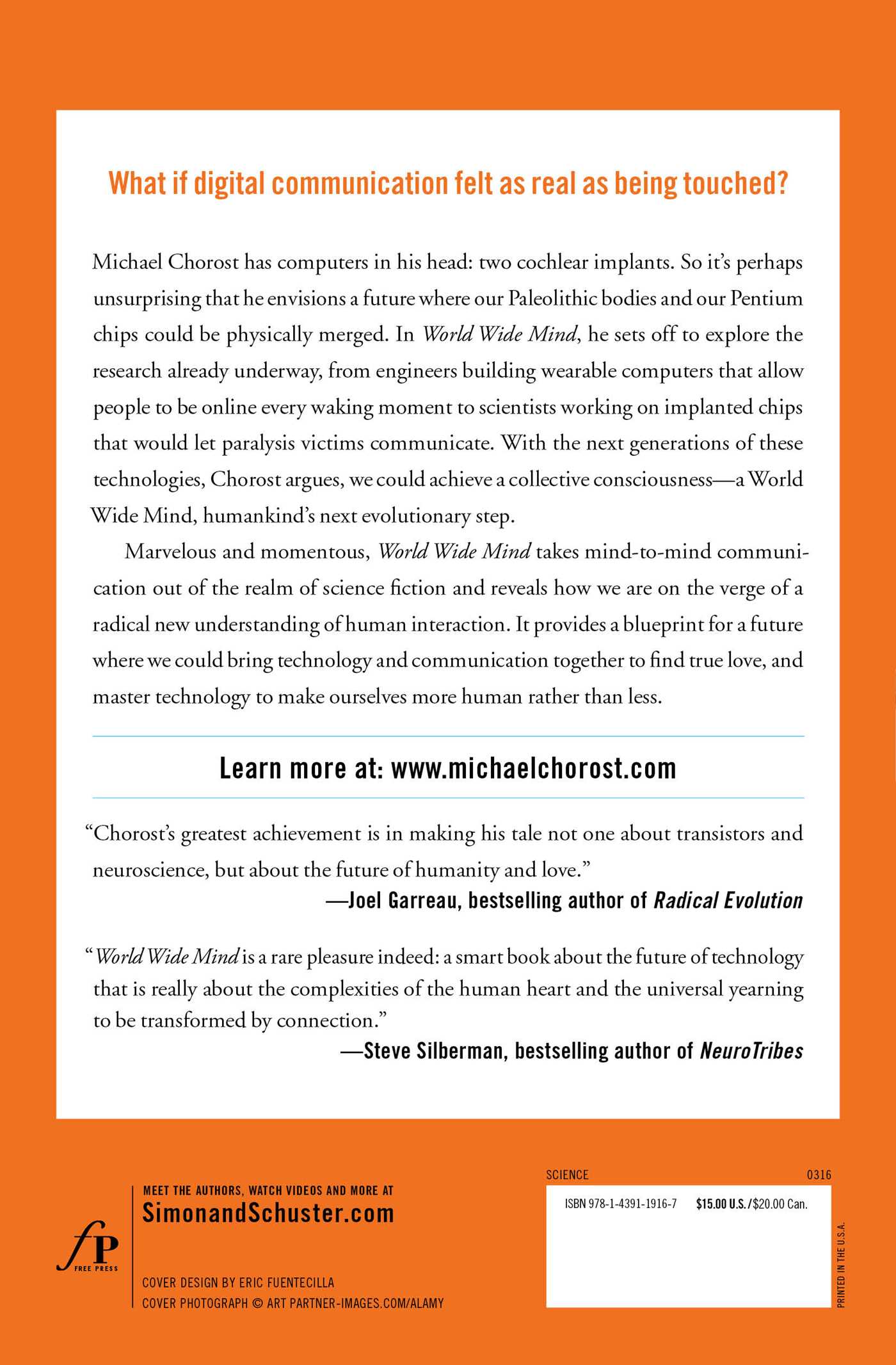 By Michael Chorost
LIST PRICE $16.99
PRICE MAY VARY BY RETAILER

What if digital communication felt as real as being touched?

This question led Michael Chorost to explore profound new ideas triggered by lab research around the world, and the result is the book you now hold. Marvelous and momentous, World Wide Mind takes mind-to-mind communication out of the realm of science fiction and reveals how we are on the verge of a radical new understanding of human interaction.

Chorost himself has computers in his head that enable him to hear: two cochlear implants. Drawing on that experience, he proposes that our Paleolithic bodies and our Pentium chips could be physically merged, and he explores the technologies that could do it. He visits engineers building wearable computers that allow people to be online every waking moment, and scientists working on implanted chips that would let paralysis victims communicate. Entirely new neural interfaces are being developed that let computers read and alter neural activity in unprecedented detail.

But we all know how addictive the Internet is. Chorost explains the addiction: he details the biochemistry of what makes you hunger to touch your iPhone and check your email. He proposes how we could design a mind-to-mind technology that would let us reconnect with our bodies and enhance our relationships. With such technologies, we could achieve a collective consciousness—a World Wide Mind. And it would be humankind’s next evolutionary step.

With daring and sensitivity, Chorost writes about how he learned how to enhance his own relationships by attending workshops teaching the power of touch. He learned how to bring technology and communication together to find true love, and his story shows how we can master technology to make ourselves more human rather than less.

World Wide Mind offers a new understanding of how we communicate, what we need to connect fully with one another, and how our addiction to email and texting can be countered with technologies that put us—literally—in each other’s minds. 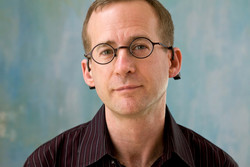 "World Wide Mind is a rare pleasure indeed: a smart book about the future of technology that is really about the complexities of the human heart and the universal yearning to be transformed by connection. By combining cutting-edge neuroscience, keen insight into the social potential of networks, and touchingly candid personal anecdotes, Chorost has written one of the most memorable and thought-provoking books of the year." —Steve Silberman, bestselling author of Neurotribes

"A fascinating discussion of optogenetics research... Mr. Chorost’s curiosity is contagious... Michael Chorost is not only a clear and concise science writer, but also a visionary. The coming integration of humans and machines may be a bit further off than he thinks, but he convinced me that we will get there someday." —New York Times

“Michael Chorost is one of the most thoughtful writers confronting a major question of the 21st century: how will the ability to engineer human minds change the way we live, communicate, and love? As a cyborg himself, Chorost has a unique perspective that enables him to foresee how mind technologies will impact everyday issues of existence. This is a remarkable book for its ability to ponder neuroengineering through the wisdom of a humanistic lens.” —Ed Boyden, Ph.D., Associate Professor, MIT Media Lab

“In World Wide Mind, Michael Chorost takes on a daunting challenge: seriously and factually examining what it would mean to connect human minds directly through technology. Until recently in the realm of science fiction, this task is of increasing importance as our inventions even now blur the boundary between the made and the born. Chorost’s greatest achievement is in making his tale not one about transistors and neuroscience, but about the future of humanity and love.” —Joel Garreau, bestselling author of Radical Evolution

“In World Wide Mind, Chorost once again offers an impressively vivid story, and it is a pleasure to follow him on his envisioned future of human beings with directly connected brains… World Wide Mind is a thought-provoking story.”—New Scientist

"Chorost’s writing is clear, visionary and romantic. . . . Chorost’s book represents the new trend to see technology as more than a cold utilitarian tool, but as a harbinger of good and social harmony if used in the right ways." —Big Think

“A deeply personal exploration of individuality, connection, and the brain. Chorost does an impressive job of articulating how brain-to-brain communication could become real, and of exploring its implications for all of us. Moving, insightful, and provocative.” —Ramez Naam, author of More Than Human

“An adroit overview of the progress in joining together computers and humans. . . . Using the analogy that a violinist contributes to an orchestra without diminishing herself, Chorost makes a stimulating case that implanted computers might propel humans to the next step in evolution.”—Kirkus Reviews

“The upshot of the research Chorost details is nothing less than a pathway to telepathy, telempathy and a linked world consciousness. The real triumph of the book derives from Chorost's storytelling ability. . . . Moreover, the book is shadowed by a personal arc in which Chorost confronts his long-time disconnect with person-to-person intimacy. The takeaway is that, if mindful of the inevitable problems that will arise in this new step of human evolution, we could become a species capable of aspiring to more than the sum of our parts.” —The L Magazine

“Chorost tilts positively, in general, seeing physiological palliatives in brain-control technology, such as cures for paralysis and Parkinson’s disease as well as a futuristic, elevated experience of consciousness among people with an Internet-connected mind-reading capability.”—Booklist

“Chorost’s tour of here-and-now neuroscience makes for an engaging account of how the brain communicates with itself and the world.”—Publishers Weekly

By Michael Chorost
LIST PRICE $16.99
PRICE MAY VARY BY RETAILER