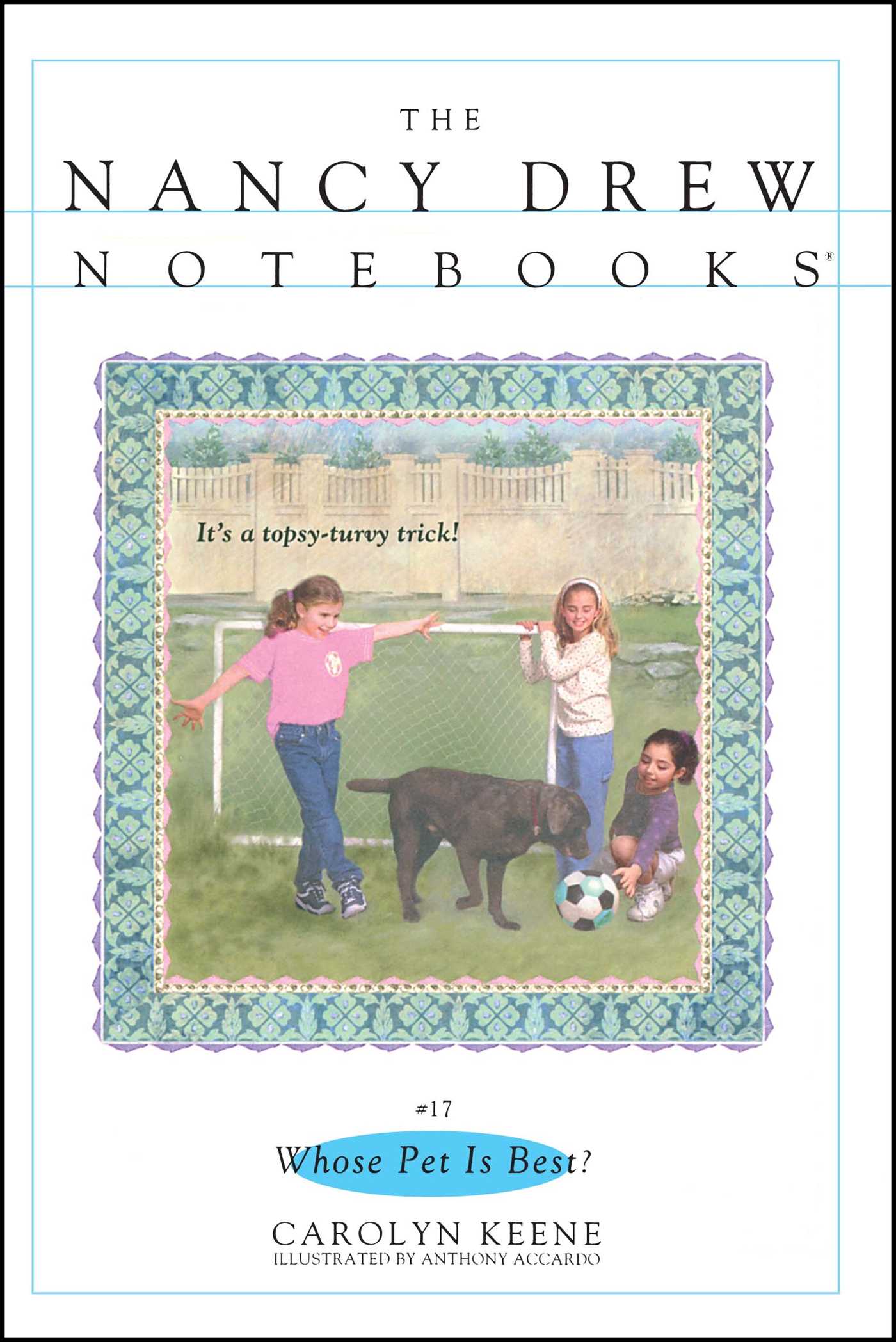 Whose Pet Is Best?

WHAT'S ON TV? IS IT NANCY DREW?
It's the Amazing Pet Contest, and the winner gets to go on Mr. Lizard's Funhouse . . . on TV! Katie's got a singing parrot. David's got a gross rat. And Nancy's got Chocolate Chip, her soccer-playing puppy. . . .
But Chip won't do her trick. Something's wrong, and Nancy's afraid she's sick. She also thinks it just wouldn't be fair if Chip doesn't get to go on TV because somebody played a dirty trick on her!

Hey, kids, do you have a poodle that can doodle?" the man on television asked. "Or a snake that can shake? Does anyone out there have an amazing pet?"

"We do! We do!" Eight-year-old Nancy Drew and Katie Zaleski bounced up and down on the couch in Nancy's den.

"If you do, then come meet me, Mr. Lizard, at the Carl Sandburg Elementary School tomorrow at ten A.M.," the man continued. "For the Amazing Pet Contest."

Bess Marvin and her cousin George Fayne, Nancy's two best friends, jumped up from the couch and cheered. Nancy's puppy, Chocolate Chip, was going to be in the contest. So was Katie's parrot, Lester.

The four girls were all in the same third-grade class.

"And remember, kids," Mr. Lizard said. "The winning pet and its owner will appear live on TV -- right here on Mr. Lizard's Funhouse. "

Mr. Lizard's Funhouse was Nancy's favorite television show. She loved the games, songs, and silly jokes. But most of all, she loved the funny man with the wild red hair -- Mr. Lizard.

Katie clasped her hands. "I'd do anything to be on Mr. Lizard's show. I'd wear my baby picture around my neck! I'd even eat brussels sprout sandwiches! "

"That's our show for today, kids," Mr. Lizard said. "But before we say goodbye, it's time for a little lizard dancing!"

Nancy and her friends did the lizard dance, too. They waved their fingers behind their heads and flicked their tongues in and out.

When the show was over, Nancy turned off the TV. "I can't believe Mr. Lizard is going to be in our very own school yard tomorrow."

Katie fell back on the couch and hugged her knees. "I don't think Lester and I will sleep a wink tonight.

Bess turned to Katie. "What are you and your parrot going to do in the contest?"

"Melvin is allergic to feathers," Katie explained, "so Lester has to leave whenever he's around."

"Of course, Chip's got a great trick, too," Bess added quickly. "How's it going, Nancy?"

"Let's find Chip, and I'll show you," Nancy said."Chip -- here, girl," Nancy called as the four friends walked out of the den and into the living room.

Hannah Gruen, the Drews' housekeeper, was scrubbing muddy paw prints off the couch.

"Uh-oh," Nancy said. "Did Chip jump on the couch with her dirty paws again?"

Hannah nodded. "Maybe you can teach Chip another trick -- to keep off the furniture."

"I put her in the yard," Hannah said. "She can't cause much trouble out there."

Nancy led her friends outside. Chip was tied to a tree with a long leash. She was lying in the shade. Someone else was in the yard, too -- Brenda Carlton.

"What are you doing here, Brenda?" Nancy asked.

Brenda flipped her dark hair over her shoulder. "I'm writing a story about the Amazing Pet Contest for my newspaper.

The Carlton News was Brenda's own newspaper. Her father helped her type it on their home computer every week.

"You have seen the latest issue, haven't you?" Brenda asked the girls.

"Yeah," Katie whispered to Nancy. "At the bottom of Lester's birdcage. "

"I heard that, Katie, " Brenda said. She turned to Nancy. "By the way, Nancy, what trick did you teach your dog? What's her name -- Oatmeal Raisin? Cherry Vanilla?"

"Her name is Chocolate Chip," Nancy said as she unhooked the leash from Chip's collar. "And we were just about to practice."

"Mind if I watch?" Brenda asked sweetly. It was a fake kind of sweet.

Nancy shrugged her shoulders and picked up a soccer ball from the ground. She stood in front of the goal she had set up, looked at Chip, and called out, "Stay." Then Nancy kicked the ball to her puppy.

Chip nuzzled the ball. She flipped it in the air with her nose and bounced it on her head. When the ball was high, Chip rolled on her back and kicked the ball with her hind feet. It flew into the net.

Nancy turned to Brenda. "Will we be reading about Chip in the Carlton News?"

Brenda forced a yawn. "A stupid dog trick does not make a good story. But if Chip fails and makes a fool of her owner," Brenda said, "now, that's a good story."

Nancy glared at Brenda. "That will never happen."

Brenda flashed a mean smile. "Anything can happen."

"What type of tricks are the other pets doing?" Bess asked.

"I heard Orson Wong is bringing a flea circus to the contest," Katie said.

Nancy turned and saw Jason Hutchings and David Berger enter her yard. They were famous for playing jokes on all the kids at school.

"David has a pet in the contest, too," Jason said.

"What kind of pet?" Nancy asked.

"EEEEeeeeeewwww!" the girls all screamed at once.

"His name is Skeevy." David made crawling movements with his fingers. "And he stands on his hind legs and begs for cheese."

"So what? Chip's not going to win anyway. " Jason held the soccer ball over his head. "Skeevy is."

Chip barked and jumped at the ball. It was too high for her to reach.

"Hey, Jason, throw it here! " David yelled. He was jumping up and down next to Nancy's house."Okay, you asked for it." Jason threw the ball to David -- hard.

Nancy held her breath as she watched the ball sail over David's head and crash through the living room window.

"You two are in big trouble! " Bess shouted to the boys.

"We're outta here," David said as he and Jason ran from the yard.

Then Chip bolted toward the house. When she got close, she yelped and leaped right through the broken window.

Whose Pet Is Best?