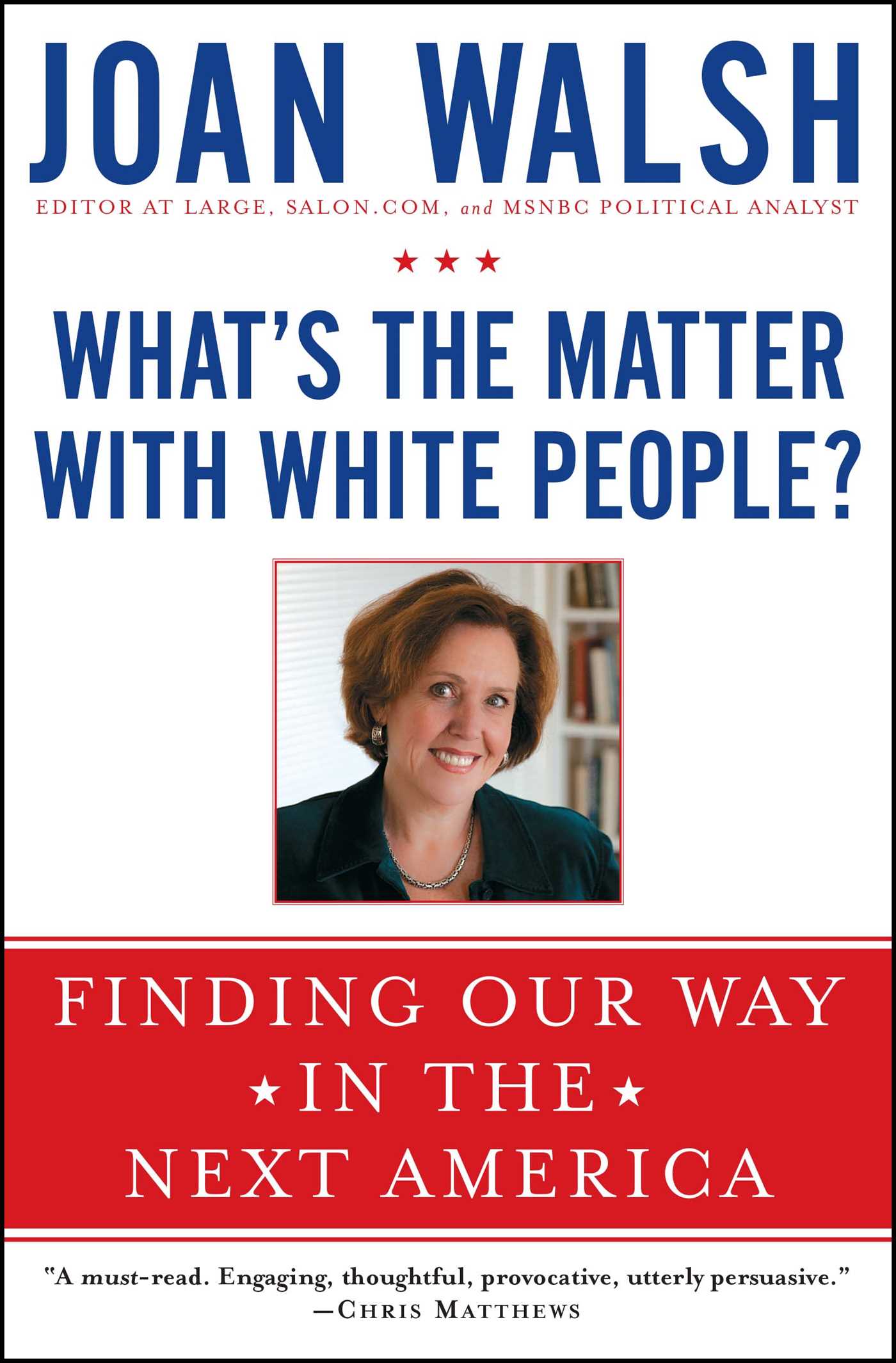 By Joan Walsh
LIST PRICE $17.99
PRICE MAY VARY BY RETAILER

Using her extended Irish-Catholic working-class family as a case in point and explaining her own political coming-of-age, Walsh shows how liberals unwittingly collaborated in the “us versus them” narrative and how the GOP’s renewed culture war now scapegoats segments of its own white demographic.

Part memoir, part political history, What’s the Matter with White People? is essential reading to combat political and cultural polarization and to build a more just and prosperous multiracial America in the years to come.

WITH A NEW AFTERWORD

“In this wonderfully insightful book, Joan Walsh shows how America built a large and vibrant (although mostly white) middle class that fueled the greatest economic boom in history and made a reality of the American dream. Hers is the story of postwar America told through a working class New York Irish Catholic family whose political divisions mirrored the nation’s. Moving and powerful, her account will help people of all races think through how we can build a just and prosperous multiracial America.”

“A brilliant and illuminating book about America since the upheavals of 60's and 70's. WHAT’S THE MATTER WITH WHITE PEOPLE? is about the heart and soul of America, from our Founding Fathers to Hillary and Barack. It's about our middle class, which so recently flourished, and how it has been injured and diminished almost beyond repair by greed and racist fear-mongering. It's about America's greatness and delusion, the betrayal of the working class, and the fragmentation of the Democratic party. It's about how Walsh's own Irish Catholic family from New York was treated, responded, and fared in the years between Richard Nixon and Barack Obama. Walsh writes with passion, precision, and insight into how racism has made such a bold public comeback. Her book was heaven for a political junkie like me, somehow managing to be painful and exhilarating at the same time.”

“Joan Walsh’s reflections and observations from her personal journey as an Irish Catholic daughter of a Northeastern blue collar family provides a unique window into the hearts, aspirations, anguish, anger, fears, and pride of white working class voters during the twentieth and twenty-first centuries. No one can properly understand current class politics and race relations in America unless they’ve read this book.”

“Walsh is particularly moving when she tells the story of American politics through family. When the dying wife of a New York City cousin and copy makes her last phone call to Walsh to congratulate her for standing up to Bill O’Reilly, or when discussing her daughter Nora’s multicultural declaration, ‘I’m everything, Mom!,’ Walsh humanizes her class through her family and persuades through empathy-arousing story…[A] thrilling and moving family and political memoir that will help those who read it decipher the political spectacle that will unfold.”

“Joan Walsh draws on her experience with her extended Irish-American family in a lively dissection of a Golden Age that appears to be gone forever – or maybe is an illusion – in WHAT’S THE MATTER WITH WHITE PEOPLE?...Very readable.”

“As the United States becomes a ‘majority-minority’ culture, while the GOP doubles down on racial and cultural appeals to rev up its demographically threatened white base in 2012, Walsh talks about race in honest, unflinching, unfamiliar terms, acknowledging not just Republican but Democratic Party political mistakes – and her own. This book will be essential reading as the country struggles through political polarization and racial change to invent the next America in the years to come.”

“Using her personal journey growing up in a blue-collar, Irish Catholic family, Walsh offers a window into the hopes, fears, racial anxieties and political leanings of a group who have become in some ways all but invisible in a post-All in the Family era.”

“A must-read….Drawing on her own upbringing, [Walsh] sees more parallels than most people care to admit between the conditions, some self-imposed, that lead to white immigrant poverty and those that lead to black poverty.”

“Both a very personal story and a historical take on hot-button issues in American politics.”

By Joan Walsh
LIST PRICE $17.99
PRICE MAY VARY BY RETAILER