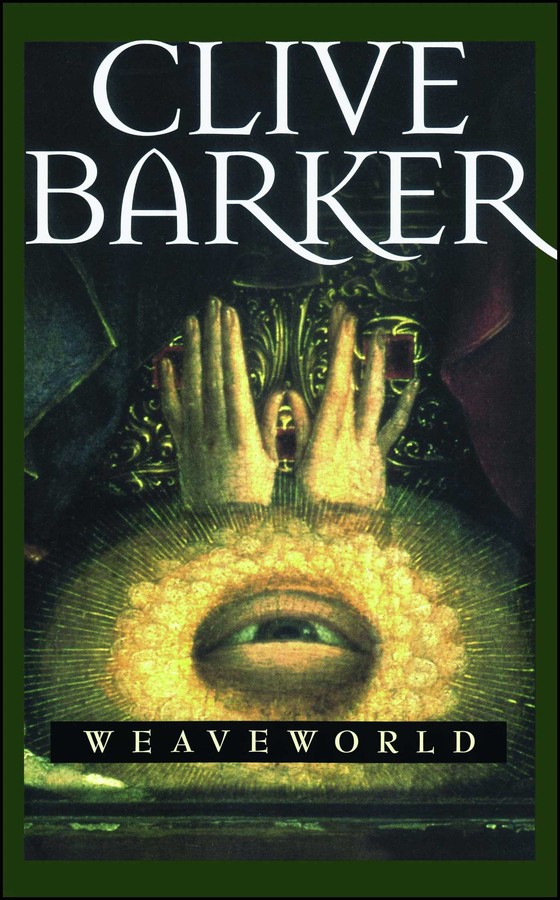 By Clive Barker
LIST PRICE $19.99
PRICE MAY VARY BY RETAILER

Clive Barker has made his mark on modern fiction by exposing all that is surreal and magical in the ordinary world --- and exploring the profound and overwhelming terror that results. With its volatile mix of the fantastical and the contemporary, the everyday and the otherworldly, Weaveworld is an epic work of dark fantasy and horror -- a tour de force from one of today's most forceful and imaginative artists.

There is no first moment; no single word or place from which this or any other story springs.

The threads can always be traced back to some earlier tale, and to the tales that preceded that; though as the narrator's voice recedes the connections will seem to grow more tenuous, for each age will want the tale told as if it were of its own making.

Thus the pagan will be sanctified, the tragic become laughable; great lovers will stoop to sentiment, and demons dwindle to clockwork toys.

Nothing is fixed. In and out the shuttle goes, fact and fiction, mind and matter woven into patterns that may have only this in common: that hidden among them is a filigree that will with time become a world.

It must be arbitrary, then, the place at which we choose to embark.

Somewhere between a past half forgotten and a future as yet only glimpsed.

This place, for instance.

This garden, untended since the death of its protector three months ago, and now running riot beneath a blindingly bright late August sky; its fruits hanging unharvested, its herbaceous borders coaxed to mutiny by a summer of torrential rain and sudden, sweltering days.

This house, identical to the hundreds of others in this street alone, built with its back so close to the railway track that the passage of the slow train from Liverpool to Crew rocks the china dogs on the dining room sill.

And with this young man, who now steps out of the back door and makes his way down the beleaguered path to a ramshackle hut from which there rises a welcoming chorus of coos and flutterings.

His name is Calhoun Mooney, but he's universally known as Cal. He is twenty-six, and has worked for five years at an insurance firm in the city center. It's a job he takes no pleasure in, but escape from the city he's lived in all his life seems more unlikely than ever since the death of his mother, all of which may account for the weary expression on his well-made face.

He approaches the door of the pigeon loft, opens it, and at that moment -- for want of a better -- this story takes wing.

Cal had told his father several times that the wood at the bottom of the loft door was deteriorating. It could only be a matter of time before the planks rotted completely, giving the rats who lived and grew gross along the railway line access to the pigeons. But Brendan Mooney had shown little or no interest in his racing birds since Eileen's death. This despite, or perhaps because, the birds had been his abiding passion during her life. How often had Cal heard his mother complain that Brendan spent more time with his precious pigeons than he did inside the house?

She would not have had that complaint to make now; now Cal's father sat most of every day at the back window, staring out into the garden and watching the wilderness steadily take charge of his wife's handiwork, as if he might find in the spectacle of dissolution some clue as to how his grief might be similarly erased. There was little sign that he was learning much from his vigil, however. Every day when Cal came back to the house in Chariot Street -- a house he'd thought to have left for good half a decade ago, but which his father's isolation had obliged him to return to -- it seemed he found Brendan slightly smaller. Not hunched, but somehow shrunken, as though he'd decided to present the smallest possible target to a world suddenly grown hostile.

Murmuring a welcome to the forty or so birds in the loft, Cal stepped inside, to be met with a scene of high agitation. All but a few of the pigeons were flying back and forth in their cages, near to hysteria. Had the rats been in, Cal wondered? He cast around for any damage, but there was no visible sign of what had fueled this furor.

He'd never seen them so excited. For fully a half a minute he stood in bewilderment, watching their display, the din of their wings making his head reel, before deciding to step into the largest of the cages and claim the prize birds from the melee before they did themselves damage.

He unlatched the cage, and had opened it no more than two or three inches when one of last year's champions, a normally sedate cock known, as were they all, by his number -- 33 -- flew at the gap. Shocked by the speed of the bird's approach, Cal let the door go, and in the seconds between his fingers' slipping from the latch and his retrieval of it, 33 was out.

"Damn you!" Cal shouted, cursing himself as much as the bird, for he'd left the door of the loft itself ajar, and -- apparently careless of what harm he might do to himself in his bid -- 33 was making for the sky.

In the few moments it took Cal to latch the cage again, the bird was through the door and away. Cal went in stumbling pursuit, but by the time he got back into the open air, 33 was already fluttering up above the garden. At roof height he flew around in three ever larger circles, as if orienting himself. Then he seemed to fix his objective and took off in a north-northeasterly direction.

A rapping drew Cal's attention, and he looked down to see his father standing at the window, mouthing something to him. There was more animation on Brendan's harried face than Cal had seen in months; the escape of the bird seemed to have temporarily roused him from his despondency. Moments later he was at the back door, asking what had happened. Cal had no time for explanation.

Then, keeping his eye on the sky as he went, he started down the path at the side of the house.

When he reached the front the bird was still in sight. Cal leapt the fence and crossed Chariot Street at a run, determined to give chase. It was, he knew, an all but hopeless pursuit. With a tail wind a prime bird could reach a top speed of seventy miles an hour, and though 33 had not raced for the best part of a year he could still easily outpace a human runner. But Cal knew he couldn't go back to his father without making some effort to track the escapee, however futile.

At the bottom of the street he lost sight of his quarry behind the rooftops, and so made a detour to the footbridge that crossed the Woolton Road, mounting the steps three and four at a time. From the top he was rewarded with a good view of the city. North toward Woolton Hill, and off east, and southeast, over Allerton toward Hunt's Cross. Row upon row of council house roofs presented themselves, shimmering in the fierce heat of the afternoon, the herringbone rhythm of the close-packed streets rapidly giving way to the industrial wastelands of Speke.

Cal could see the pigeon, too, though he was a rapidly diminishing dot.

It mattered little, for from this elevation 33's destination was perfectly apparent. Less than two miles from the bridge the air was full of wheeling birds, drawn to the spot no doubt by some concentration of food in the area. Every year brought at least one such day, when the ant or gnat population suddenly boomed, and the bird life of the city was united in its gluttony. Gulls up from the mudbanks of the Mersey, flying tip to tip with thrush and jackdaw and starling, all content to join the jamboree while the summer still warmed their backs.

This, no doubt, was the call 33 had heard. Bored with his balanced diet of maize and maple peas, tired of the pecking order of the loft and the predictability of each day -- the bird had wanted out; wanted up and away. A day of high life; of food that had to be chased a little, and tasted all the better for that; of the companionship of wild things. All this went through Cal's head, in a vague sort of way, while he watched the circling flocks.

It would be perfectly impossible, he knew, to locate an individual bird among these riotous thousands. He would have to trust that 33 would be content with his feast on the wing, and when he was sated do as he was trained to do, and come home. Nevertheless, the sheer spectacle of so many birds exercised a peculiar fascination and, crossing the bridge, Cal began to make his way toward the epicenter of this feathered cyclone.

Clive Barker is the bestselling author of over twenty novels and collections, including Weaveworld, Imajica, and Galilee. He regularly shows his art in Los Angeles and New York, and produces and directs for both large screen and small. He lives in California with his partner.

Time Barker puts in strands of Joyce, Poe, Tolkien, and King himself, and emerges with the one ingredient that all good rugmakers and storytellers have in common: an irresistible yarn.

The New York Times Book Review Prodigious talent....Barker creates a fantastic romance of magic and promise that is at once popular fiction and utopian conjuring.

Peter Straub Weaveworld is pure dazzle, pure storytelling. The mixed, tricky world where fantasy and horror overlap has been visited before -- though not very often -- and Weaveworld will be a guide to everyone who travels there in the future

Cincinnati Post A powerfully imagined, fully executed fantasy. A book of dreams recalling William Blake instead of Lewis Carroll....Barker borrows a great many themes from literature, folklore, and religion, and makes it completely his own. He writes with a lyrical intensity that transforms some passages from prose to poetry. He infuses his villains and horrors with such venom that they are overwhelming. And he informs everything with an imagination so powerful that it creates its own reality.

By Clive Barker
LIST PRICE $19.99
PRICE MAY VARY BY RETAILER