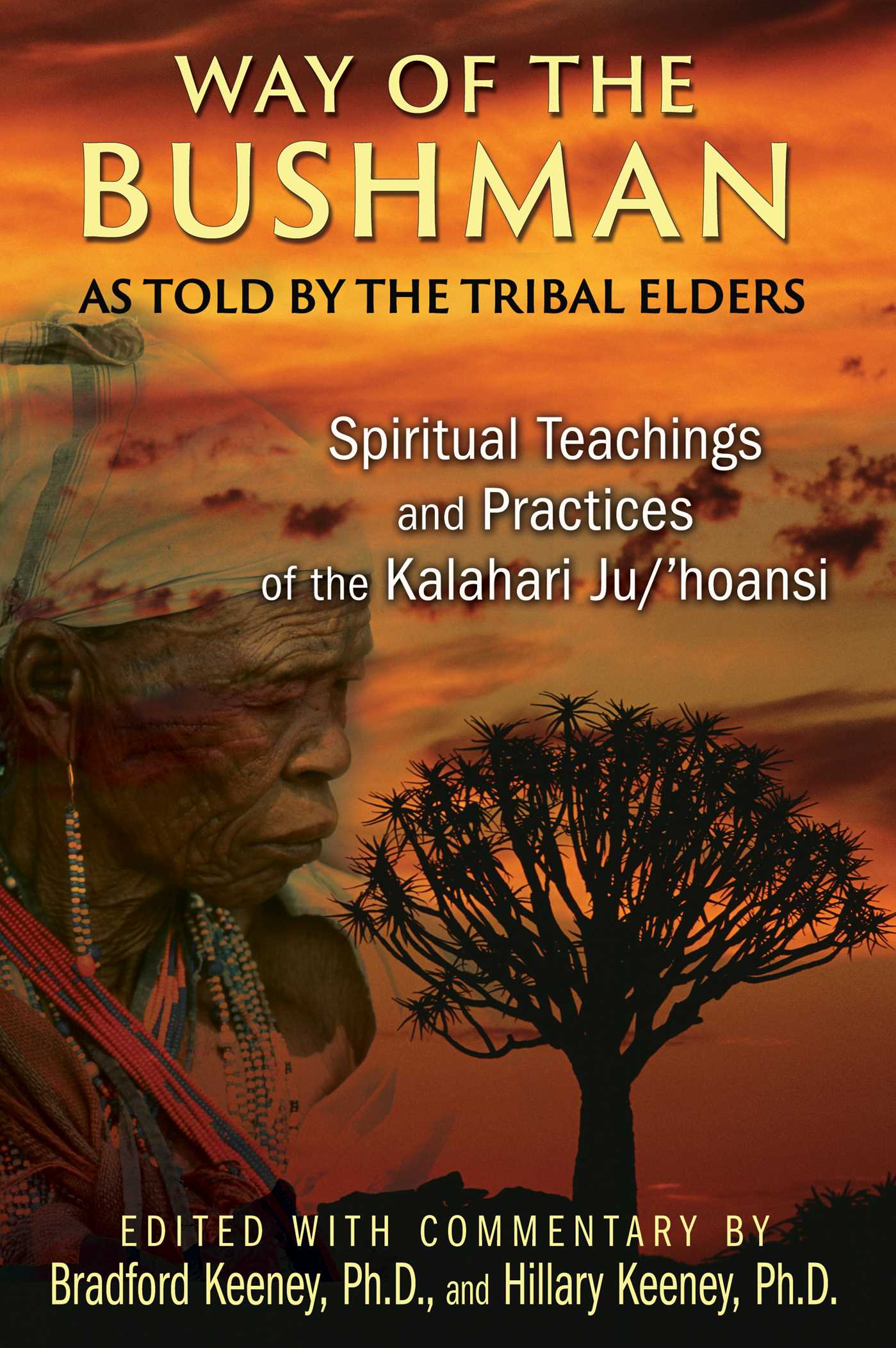 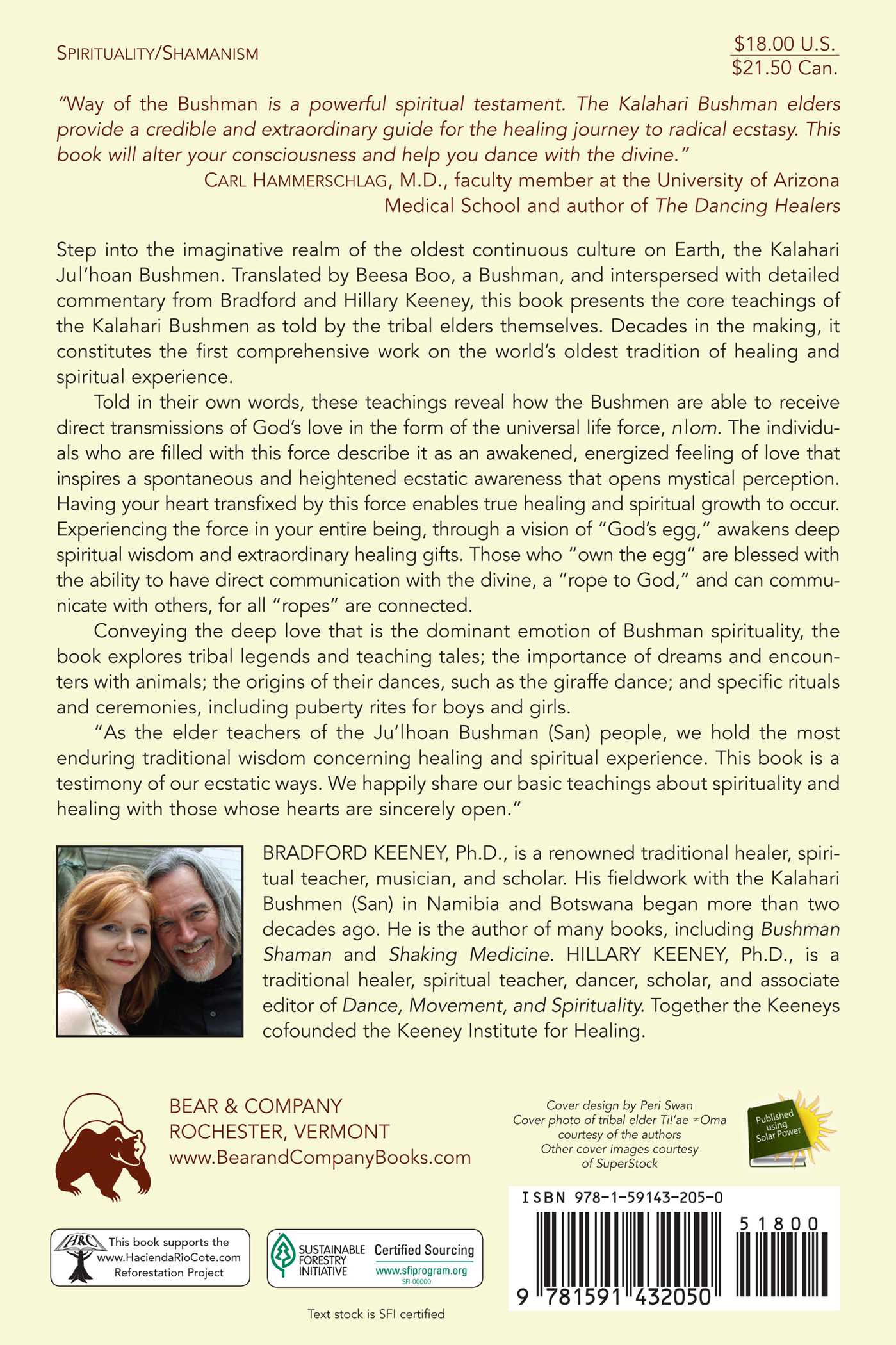 Way of the Bushman

Spiritual Teachings and Practices of the Kalahari Ju/'hoansi

• Explores tribal legends and teaching tales, the importance of dreams and animals, and the origins of their dances, rituals, and ceremonies

Step into the imaginative realm of one of the oldest continuous cultures on Earth, the Kalahari Ju/’hoansi Bushmen. Translated by Beesa Boo, a Bushman, and interspersed with detailed commentary from Bradford and Hillary Keeney, this book presents the core teachings of the Kalahari Bushmen as told by the tribal elders themselves. Decades in the making, it constitutes the first comprehensive work on the world’s oldest tradition of healing and spiritual experience.

Told in their own words, these teachings reveal how the Bushmen are able to receive direct transmissions of God’s love in the form of the universal life force, n/om. The individuals who are filled with this force describe it as an awakened, energized feeling of love that inspires a spontaneous and heightened ecstatic awareness that opens mystical perception. Having your heart transfixed by this force enables true healing and spiritual growth to occur. Experiencing the force in your entire being, through a vision of “God’s egg”, awakens deep spiritual wisdom and extraordinary healing gifts. Those who “own the egg” are blessed with the ability to have direct communication with the Divine, a “rope to God,” and can communicate with others for all “ropes” are connected.

Conveying the deep love that is the dominant emotion of Bushman spirituality, the book explores tribal legends and teaching tales, the importance of dreams and encounters with animals, the origins of their dances, such as the giraffe dance, and specific rituals and ceremonies, including puberty rites for boys and girls.

“As the elder teachers of the Ju’/hoan Bushman (San) people, we hold the most enduring traditional wisdom concerning healing and spiritual experience. This book is a testimony of our ecstatic ways. We happily share our basic teachings about spirituality and healing with those whose hearts are sincerely open.”

The first station of being in relationship with n/om--God’s love, the source of the universal life force--is called n!aroh-//xam. It is where an owner of n/om, a n/om-kxao, first starts learning about n/om. It’s like he or she is in the first grade of n/om school. Here there is often a lot of fear.

If a healer sincerely stays with n/om and remains soft with an open mind and heart, he will be wonderfully transformed. His focus on power will disappear, and if he has the courage to not run away he will be reborn into a different feeling. This is when the heart rises. At this n/om station we feel the suffering of others and feel sad for them, as we want to help them so much that our heart starts to open even more than we thought possible. When we feel this way for other people, our fear goes away. This is when our dance turns in to the stomping movement of an awakened healer. This movement helps us not fall over as n/om gets stronger and each stomp on the ground sends more vibrations into the body. When healers stomp together in a dance we say that they are all walking on the same rope, helping each other climb the rope to God.

As we go from the beginning stage of being an owner of n/om, a n!aroh-//xam, to the second station of handling n/om, g!a’aman! ausi, we no longer want power. Beginning healers typically spend a lot of time at the first station as it takes time to learn how to raise the heart. Here the contradictions and paradoxes of transition must be understood, including giving up power to receive more power, giving up control as a means of gaining more control, using our voice more while finding that words are less able to come forth as music and auditory vibration become primary, and becoming emptier in order to become more full of n/om. The strongest and most experienced healers go straight to the second station, because their hearts rise very fast. In the beginning of your development as a n/om-kxao you shout and are angry at the ancestors and trickster gods; this ceases at the next station. Our feelings change, and this alters our relationship with the ancestors. Some of them will now follow and help us. This is when it is possible to heal by pulling out the sickness. At this stage, a n/omkxao is called a !aaiha.

The third station for a n/om-kxao is where we feel that we can give a nail of n/om. Here God uses our hands to transmit nails. This is a high level of working with n/om. We call it thara n/om. This is how we help someone become a healer or empower another healer. When a n/om-kxao advances to this station, he is called a tco-kxao. Here we find that we can heal someone by transmitting a clean nail rather than solely pulling out sickness or a dirty nail. This is when healing has no pain. We have moved from power to love, effortlessly enabling us to address problems and suffering more directly with healing n/om.

The dance steps are different for each station of handling n/om. In the beginning the healer must exert effort to dance. When the dance gets hot with n/om, the singing and clapping effortlessly move the dancer. Sometimes they make our steps very fast. When there is little singing our legs get weak and we are barely able to dance. N/om cannot get hot without enthusiastic n/om singing. When the women sing for the men’s dance it can be said that the women get cooked first and transmit n/om to the men dancers who then are able to reciprocate by touching the women and giving them nails in return. N/om circulates throughout the community, and no one can say whether the singers, drummer, dancers, or healer is most responsible for waking up n/om and keeping it on the move. Everyone participates in the circulation of n/om. This is why healing must take place inside relationship and community.

Editors’ Commentary
The movement through the stations of n/om can occur during a single dance for seasoned n/om-kxaosi, transitioning through them in any order or remaining in one or several stages during most of the dance. A beginning n/om-kxao, however, will only be able to go in and out of the first sation of n/om during a given dance. It typically takes many dances to move forward into another station of handling n/om.

Many men and women become n/om-kxao, owners of the feeling for n/om (n!aroh-//xam), but only a few n/om-kxaosi learn to pull sickness (!hui) and become a pulling doctor, or !aaiha. Even fewer are able to transmit nails and arrows, a n/om-kao who is a tco-kxao. Finally, it is rare for anyone to be a fully cooked n/om-kao or “heart of the spears,” a g=aqba-nla'an.

“Way of the Bushman is a powerful spiritual testament. The Kalahari Bushman elders provide a credible and extraordinary guide for the healing journey to radical ecstasy. This book will alter your consciousness and help you dance with the divine.”

– Carl Hammerschlag, M.D., faculty member at the University of Arizona Medical School and author of Th

“First and foremost, Bradford Keeney has danced with the San (Bushmen) and met them at a kinesthetic level of understanding that is unparalleled in previous anthropological research. Having met the elder healers on their own terms, Brad developed a deep relationship that brought a new voice and insight to the representation and interpretation of their healing dance. Hillary and Brad have a very special physical and academic skillset and an exceptional dedication to research. This book reveals new depths in the beliefs and practices of San (Bushman) healing that will hopefully be as valuable for the San (Bushmen) as a record and guide in a fast-changing world as it is for the wider world to appreciate these extraordinary people.”

“Other anthropologists had not succeeded in pushing through to the deep experience that is the key to Bushman spirituality. With Brad Keeney’s acceptance as a healer, hithero closed doors began to open. This work describes in previously unavailable detail how the Bushmen learn the techniques of transition and transformation,how they journey to the spirit realm, and how they climb the ropes of God. As we read the words of these Bushman elders, we can almost feel what it must be like to undertake such journeys.”

“Bradford and Hillary Keeney have broken through the dusty curtain that often separates anthropologists from the people whose beliefs and practices they want to understand. Instead of writing exclusively about their own impressions, they foreground the teachings of Ju’hoan Bushman elders from northeastern Namibia. Their parallel commentary shows how a form of circular interaction and change-oriented activities have kept the ancient religion and its practitioners alive and successful despite major social upheaval in their community over the past century or more. It is a poignant reminder that the opportunity to share the experiences described with rare insight in this ‘bible’ may never arise in the same way again.”

Way of the Bushman

Spiritual Teachings and Practices of the Kalahari Ju/'hoansi