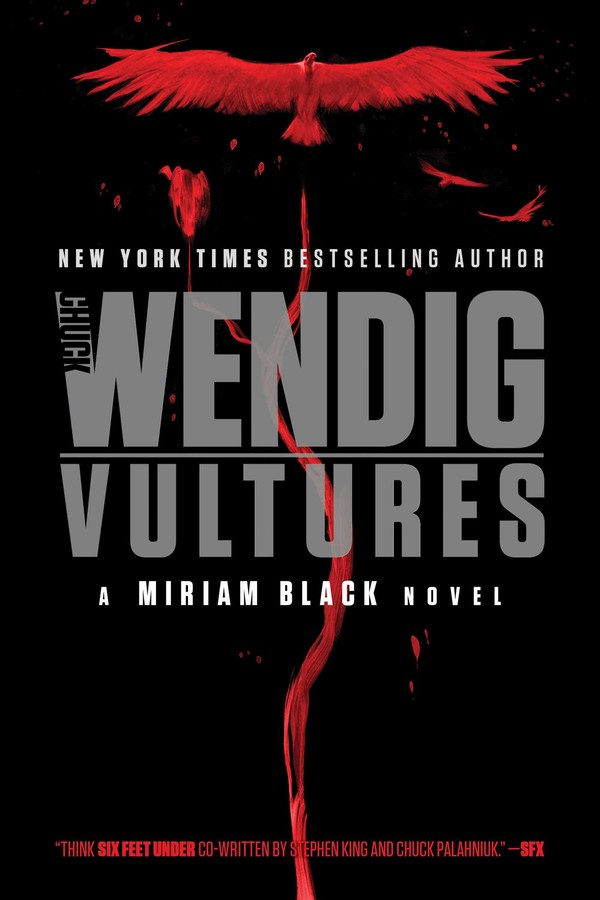 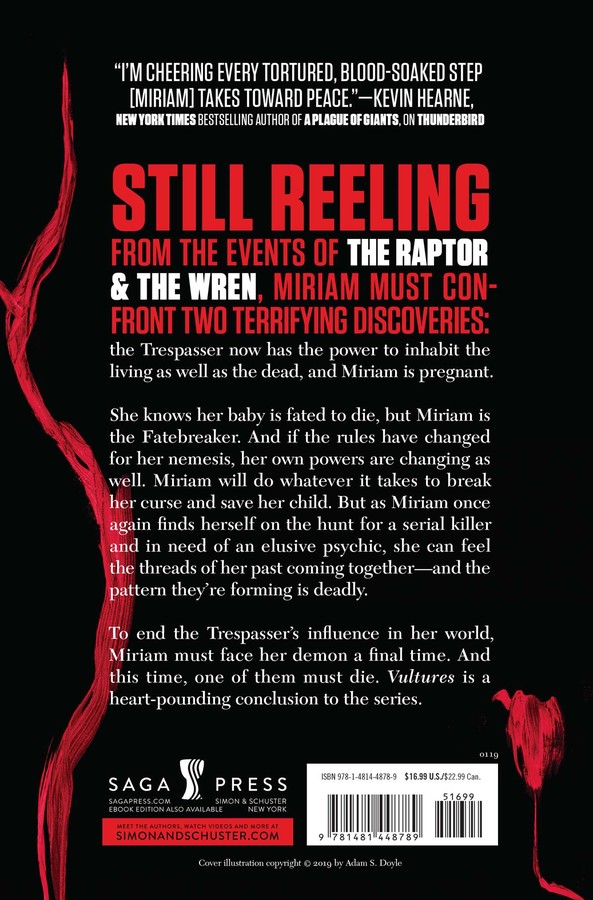 In the sixth and final thriller of the “wildly entertaining” (Kirkus Reviews) Miriam Black series, Miriam tries to break the curse of her powers, but first she must face The Trespasser a final time.

Still reeling from the events of The Raptor and the Wren, Miriam must confront two terrifying discoveries: the Trespasser now has the power to inhabit the living as well as the dead, and Miriam is pregnant.

Miriam knows her baby is fated to die, but Miriam is the Fatebreaker. And if the rules have changed for her nemesis, her own powers are changing as well. Miriam will do whatever it takes to break her curse and save her child. But as Miriam once again finds herself on the hunt for a serial killer and in need of an elusive physic, she can feel the threads of her past coming together—and the pattern they’re forming is deadly.

To end the Trespasser’s influence in her world, Miriam must face her demon a final time. And, this time, one of them must die. Vultures is a heart-pounding conclusion to the series: “Think Six Feet Under cowritten by Stephen King and Chuck Palahniuk” (SFX).

Vultures ONE THE MISSING PIECE
NOW.

This is what it feels like, six months into losing Louis:

It feels like someone has pushed a corkscrew through her middle. It is a comically large tool, this corkscrew, like a cartoon prop, but it feels cold and sharp as it pushes its way through her body every morning, every afternoon, every evening, every hour and minute and second of every fucking day and every fucking night, coiling deeper in her before it reaches her margins and then rips its way back out in one brutal yank, uncorking her insides, spilling her guts, hollowing her out from belly button to backbone. The vacancy is palpable, a ragged hole like a cannonball blast through a tall ship’s sail, setting the craft adrift. It feels like her organs are exposed: her stomach, ripped out, unable to contain food; her heart ruptured and pouring blood; her lungs perforated, air whistling a mournful dirge through the ragged flaps of tissue with every miserable breath she pulls through them. Louis felt a part of her, once, and now he is gone. And she is reminded of that pain moment to moment—

Because she is carrying his child.

And that is the quite the ironic sensation, is it not? Louis is gone, and her middle feels ripped out—even as she experiences the opposite sensation of walking around with a squirming fullness around her belly. It’s as if the baby is not a baby but rather a black hole setting up shop inside her.

As she walks up to the Dead Mermaid Hideaway here in Hesperia, California, she feels the baby in there. Roiling around like a lone potato in a pot of boiling water. Little fucker won’t stop moving. Like the baby wants to kung-fu-kick its way out of the womb. The doc they found for her in Beverly Hills, Dr. Shahini—with her enviable golden skin and those bold black eyelashes like the wings of a swallowtail butterfly—said that Miriam’s body should release chemicals that make her welcome the presence of the child. The chemicals, she said, would help Miriam feel “at home” with the baby inside her, but Miriam told her, “Doc, my body doesn’t make those chemicals.” Because to this day, the baby feels like a parasite, an intruder—

—and mostly she just wants it gone. Gone because it reminds her of him. Gone because even in its fullness and agitation, it makes her feel hollow, empty, and painfully alone. And already she can hear Gabby chastising her inside her mind: It is not an it, Miriam; she is a her.

She’s your daughter, not an end table.

“Feels like a fucking end table to me,” Miriam grouses under her breath. “God, what a great mom I’m going to be.” Like that matters. Right now, until she figures out a way forward, this child will barely be born before it dies—robbed from the world at the moment of birth. From darkness to a brief flash of light, and then taken away again. Returned to the formless chaos from whence all things come. Life gone too quickly to where it usually goes slow: unmade into death.

All part of fate’s plan.

But Miriam is Fate’s Foe. She is the Riverbreaker.

Fate will not write the end of this story. She will.

Miriam swears to herself now, then, always: she will figure out how and why this kid—this parasite, this end table—is going to die, and she will save its life. Even if that means ending her own in the process. She owes that much to Louis. He is dead because she fucked up.

This baby will not suffer the same fate.

This baby will live.

Deep breath, Miriam. In. Out. The baby squirms inside her.

She takes out her cell and she texts Gabby: I’m here, Dead Mermaid Hideaway.

Taylor Bowman, the preening lackwit, and also the reason she’s here. The doe-eyed pretty-boy is about to get himself murdered in the next—she checks her watch—37 minutes.

Miriam: I haven’t gone in yet.

Gabby: I wish I was there with you

Miriam: I’ll be fine. You’ve got a more important job. Any luck?

Gabby: None yet, will let you know

Miriam looks up and describes what she sees: Awning has a fake mermaid skeleton draped across it. It’s no lie. Someone has made a replica of a mermaid skeleton. It’s a pretty good replica, too—still has some fish scale on its bony tail, some fake webbing between the fingerbones. The red wig is maybe a bridge too far, but the clamshell bra seems a nice touch. She doesn’t bother describing the other signs plastered awkwardly around the doorway in: LADIES DRINKS = 50 CENTS OFF and LOOTERS GET DEAD and FAMOUS FOR OUR GHOST PEPPER MARGARITA, whatever the fuck that is.

Miriam adds: Shifty desert dive bar, except she doesn’t mean shifty, because autocorrect corrected shitty, so then she has to fix it in all caps: SHITTY desert dive bar duck you autocorrect, which just pisses her off more and leads her to type in thumb-punching rage, ducking motherducker fuck shift shit duck it.

Gabby: I told you, you should just put the profanity in your phone’s dictionary.

Miriam: It’s not my phone and that sounds like work. I’m going in. Will text you updates.

She slides the phone into her back pocket and heads inside the bar. 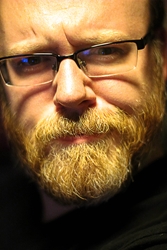 Chuck Wendig is a novelist, screenwriter, and game designer. He’s the author of many published novels, including but not limited to: Blackbirds, The Blue Blazes, the YA Heartland series, and the New York Times bestselling series Star Wars: Aftermath. He is cowriter of the short film Pandemic and the Emmy Award–nominated digital narrative Collapsus. Wendig has contributed over two million words to the game industry. He is also well known for his profane-yet-practical advice to writers, which he dispenses at his blog, TerribleMinds.com, and through several popular ebooks, including The Kick-Ass Writer, published by Writers Digest. He currently lives in the forests of Pennsyltucky with wife, tiny human, and dog.

“A is a much-deserved conclusion for one of horror's most imaginative heroines.”