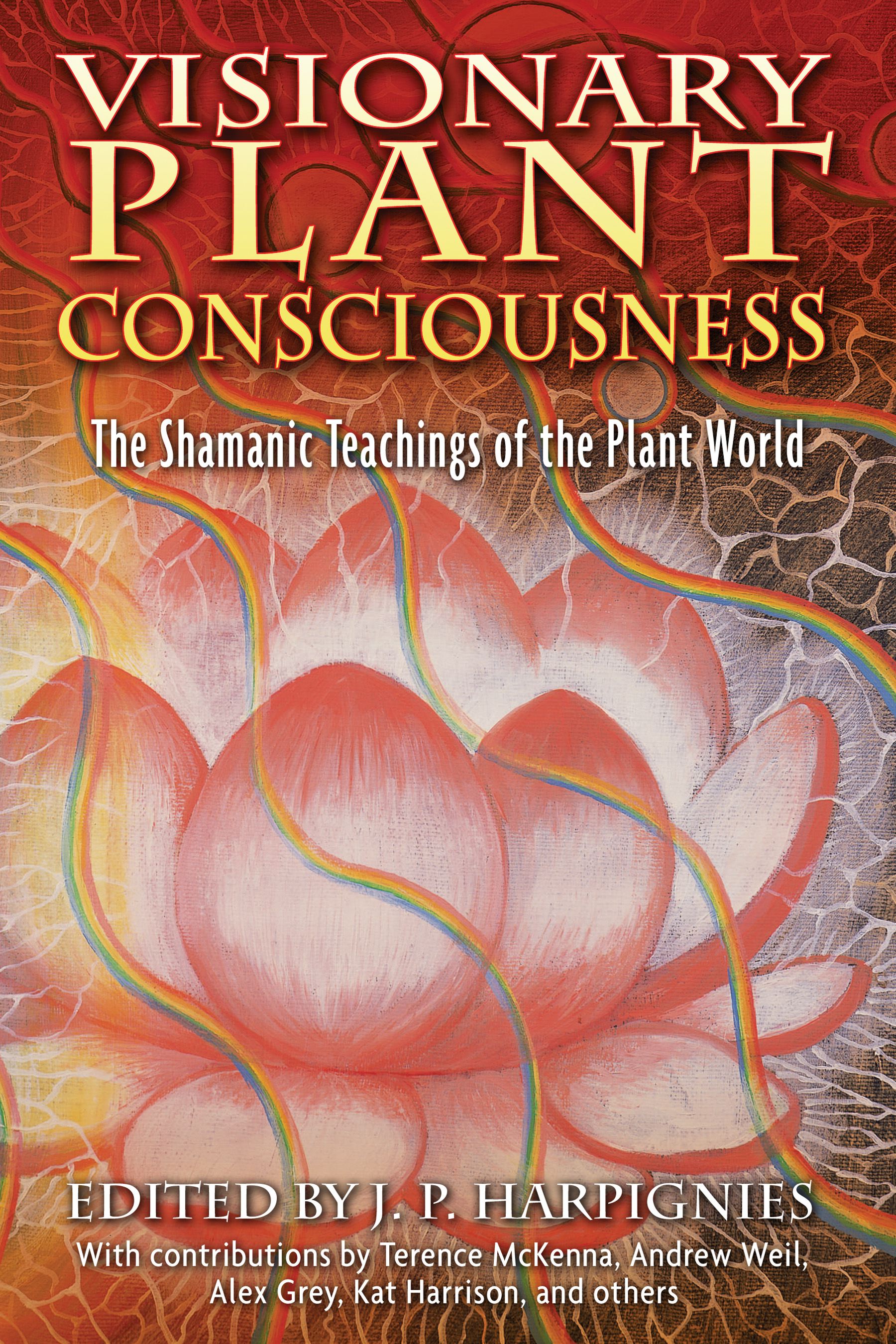 Visionary plants have long served indigenous peoples and their shamans as enhancers of perception, thinking, and healing. These plants can also be important guides to the reality of the natural world and how we can live harmoniously in it.

In Visionary Plant Consciousness, editor J. P. Harpignies has gathered presentations from the Bioneers annual conference of environmental and social visionaries that explore how plant consciousness affects the human condition. Twenty-three leading ethnobotanists, anthropologists, medical researchers, and cultural and religious figures such as Terence McKenna, Andrew Weil, Wade Davis, Michael Pollan, Alex Grey, Jeremy Narby, Katsi Cook, John Mohawk, and Kat Harrison, among others, present their understandings of the nature of psychoactive plants and their significant connection to humans. What they reveal is that these plants may help us access the profound intelligence in nature--the “mind of nature”--that we must learn to understand in order to survive our ecologically destructive way of life.

Terrence McKenna: Listening to nature is what shamanism is about. The planet yearns to communicate, and all nature is in fact language. We are somewhat anesthetized to this by our very introspective cultural style. Our whole focus of attention is inward, and so the natural world has fallen silent for most of us. Jean Paul Sartre said: “Nature is mute.” That, sadly, captures perfectly modernity’s relationship to nature, but still--if that isn’t the lamest statement made by a twentieth-century philosopher, I don’t know what is.

Dennis McKenna: If you juxtapose that statement of Sartre’s with what the ayahuasqueros tell us, we can really understand the deep disconnect that presently exists between the way the modern Western mind views nature and how indigenous peoples do. If you ask an ayahuasquero how he learned about these plants and their medicinal value--how to use them and what they’re good for--he’ll say: “I learned about them in visions.” They view the psychoactive plants as teachers, and ayahuasca as a master-teacher. The conventional wisdom among ayahuasqueros is that if you want to learn the properties of a new plant--what its medicinal or spiritual qualities are--you take it with ayahuasca, and ayahuasca will teach you about the plant in visions.

This way of knowing is related to the pheromonally mediated information exchange between plants and other organisms that takes place at a subliminal level. Fifteen years ago I was researching with a shaman psychoactive virola snuffs. Virola is a genus of trees in the Myristicaceae (nutmeg) family, whose resins are widely used by groups in wet tropical forests of South America as hallucinogenic snuffs. We collected a dozen different kinds and put them into a bag. Every time we’d collect one, the shaman would strip the bark off the plant, look at it, smell it, taste it, examine its properties very closely, and then pronounce a judgment about that particular snuff. He would say that one was strong; one wasn’t; one would be good to make an orally active paste from, and so on and so forth.

I noted all of his comments in a collection notebook. We got this stuff back into the lab where we have gas chromatographs and spectrometers, and I began to examine the samples. The shaman had said that one snuff in particular was strong. Therefore, clinical analysis should reveal a very high amount of tryptamine in it. The shaman had indicated that another snuff was not that strong. Thus there should either be no alkaloids in it or low levels of alkaloids.

What do you think the correlation was? There was a 100 percent correlation between what he said and my gas chromatograph’s readings. The shaman didn’t have fancy instruments. He used his highly refined senses to tune into the plant’s language--its use of smell, taste, appearance, pigments, and pheromones--to trigger receptors in the nervous, olfactory, and visual systems of other species.

Wade Davis: I observed similar phenomena when I was working in Haiti. Joseph Campbell was once asked to name one place where people actually lived their religious beliefs, and without pausing he said “Haiti.” People in the voodoo societies there walk in and out of their spirit realm with an ease and impunity that’s astonishing. You become very much aware of the fact that this construct we call reality is just one model of reality, and I find that to be a very hopeful realization.

For me, one of the most intense pleasures of travel has been to be able to spend time with shamans who think they can go beyond the Milky Way, or with nomadic Penan hunters who can follow an animal call through the night. All of these lessons about the range of the world’s cultural palette have taught me that this worldview we’ve inherited in our own culture is just one model of reality, and that there are other ways of thinking and interacting with the Earth.

It was in Haiti that I became absolutely convinced that indigenous people who have not bought in to a particular kind of positivist tradition but, by contrast, are open in their essence to the whole spectrum of life as they see it, are probably capable of intuiting things from the natural world that are simply closed to us. This is not because indigenous peoples are better or worse than we are, and not because they’ve got some special metaphysics. It’s because all of these sensitivities are responses to specific cultural choices. Our sailors used to be able to see Venus during the daytime. That’s something we can’t do anymore, not because we can’t do it physically, but because, culturally, it’s no longer an attribute that we value.

I learned from my experiences in Haiti to really believe that people who are not brought up in a Cartesian world are capable of almost anything. Certainly you see that in the power of spirit possession. You can be sitting next to someone one moment, and suddenly she becomes a god from the voodoo pantheon. The spirit has displaced the soul of the living and that person has become a “divine horseman,” mounted by a spirit. When you see that, you get a kind of visceral sense of the potential of the human imagination and human spirit unfettered by the constraints of Cartesian logic.

"The uniquely knowledgeable and inspiring voices in this book provide an insightful multidisciplinary context for understanding the once and future history of human relationships with sacred plants. As the beneficial applications of psychedelics continue to re-gain credibility in mainstream science and medicine, these voices offer necessary clues about how the states of mind that sacred plants engender can be conscientiously integrated into our selves and society."

“Humans have long considered psychoactive plants as teachers. This book seeks to inform Westerners about these powerful plants and about the shamans who know how to use them. Their words are clear and simple and often based on personal experience. The result is an accessible book packed with knowledge.”

"This book, which casts a clear light on visionary plants and their proper use, is recommended for those interested in the growing awareness of intelligence within the natural kingdom."

"I commend this volume as a thought-provoking examination of the thesis that our planet’s well-being could depend upon our respectful, creative use of visionary plants. Based on the evidence that these plants have long served indigenous shamans as effective methods of enhancing intuitive perceptions, engendering healing powers, and stimulating creative thinking, this book also makes a timely case for decriminalizing their responsible use."

" . . . a valuable tool in understanding the historical use, and misuse, of hallucinogenic plants. . . . offers a wealth of information that is fascinating and made me want to explore deeper."

“Twenty-three leading ethnobotanists, anthropologists, medical researchers and cultural and religious figures such as Terence McKenna, Andrew Weil, Wade Davis, Michael Polan, Alex Grey, Jeremy Narby, Katsi Cook, John Mohawk, and Kat Harrison, among others, present their understandings of the nature of teacher plants and their significant connection to humans. What they reveal is that these plants may help us access profound intelligence in nature – the mind of nature – that we must learn to understand in order to survive our ecologically destructive way of life.”