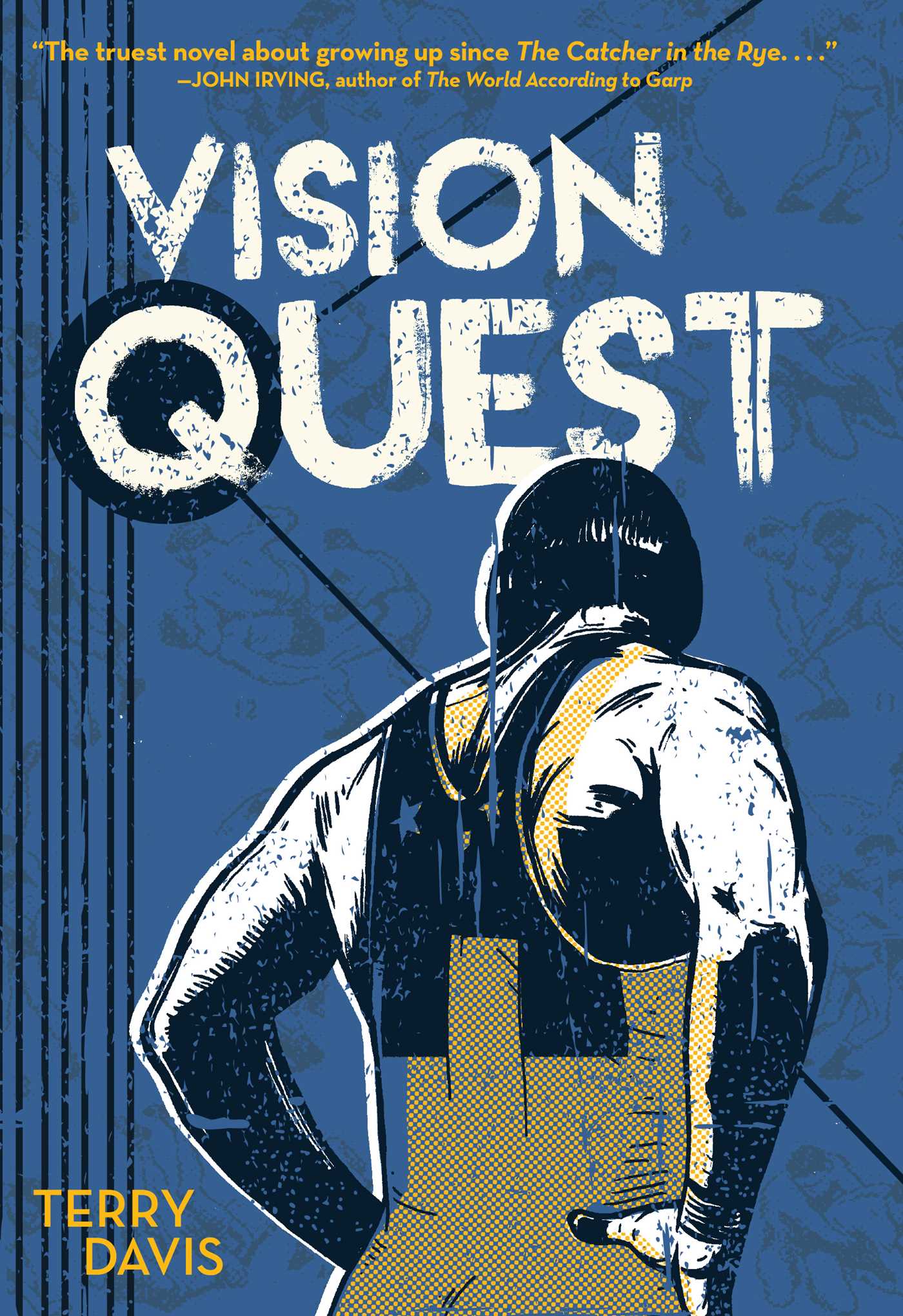 By Terry Davis
LIST PRICE $19.99
PRICE MAY VARY BY RETAILER

From acclaimed author Terry Davis comes the cult classic, Vision Quest, which was called “the truest novel about growing up since The Catcher in the Rye” by New York Times bestselling author John Irving.

Louden Swain is a high school wrestler who is working hard to cut his weight down. All he wants is to win his weight division in the state championships. But he’s distracted from his goals by the older girl with car trouble that is staying with his family for a while. He is quickly falling in love with her, but can Louden make a relationship work and reach his wrestling goals at the same time?

Filled with integrity, honesty, and a sweetness that has made this coming-of-age story a cult classic, Vision Quest is a story that will be shared for generations to come.

Vision Quest I
Both Dad and I are pretty sure Shute is going to grind my body into the green surface of our David Thompson High School wrestling mat. We work hard to put that thought out of our minds, though. I don’t wrestle Shute until after the first of the year, when the weights come up two pounds and I move down from the 154-pound class—where I’m already lean—to become probably the world’s hungriest 147-pounder. I’ve got two weeks yet. We also put it out of our minds because today is my birthday and Dad had our 1941 DeSoto reupholstered in the original mohair. He presented it to me this morning in celebration of my eighteen years and my upcoming high school graduation. Still, he couldn’t forget my impending doom. After he caressed the leather armrests, rubbed up the bristling new fabric, and spun the big old steering wheel with one finger, he noted that Carla will be able to drive me around in style and solid comfort after Shute breaks all my bones. Carla is my girl friend. She lives with us.

Carla loves the DeSoto. Today we eat our lunch in it, and she spreads a red-and-white checkered tablecloth over the backseat so she won’t drip yogurt on the mohair. I sit in front, manning our Sony portable cassette recorder, playing a Beatles collection and the Stones’ “Hot Rocks,” eating raw carrots and celery and hard-boiled eggs, turning to pure protein before her very eyes as she hands me another carrot. I’m down to 150.

Carla climbs in front and rubs the dash and window moldings with a waxed cloth Dad brought her from the store.

I see Belle walking our way as I finally open the car door to head for my English class. The wind blows hard and for a second my eyes hurt from the cold. “Hi, folksies!” yells Belle, slipping and nearly falling on the icy sidewalk. Belle, you crack, don’t do any dope in our car, I think to myself, nodding to her.

Belle is the gum-freeze queen of David Thompson High and Carla’s best friend after me. She’s wrecked a good share of the time, especially at school. She’s usually holding dope and I would would hate to see her nabbed for it with Carla. It seems that most of the administration and teachers and kids take Belle’s space travel for the effervescence of school spirit. I suppose it’s because she’s a cheerleader and beautiful. There’s really not much chance of her getting caught around school, but I still worry.

Belle is friendly and funny and a good person. She’s never done me wrong. The chance of her getting Carla in trouble is the only thing I don’t like about Belle. I sound like a parent. Carla wouldn’t like it if she knew I felt this way. There’s probably nothing to worry about. Carla is pretty down on chemicals and kind of down on dope in general, and she’s afraid Belle is overdoing it. I doubt Carla would allow Belle to do any dope in her presence.

I’m smiling big and thinking about friendship as Carla waves good-bye with her waxed cloth. I’m also being careful not to fall on my ass. If I’m going to have my coccyx broken, I’d rather Shute did it than this transient and impersonal patch of ice.

Coach Ratta passes me in the gym door. “What do you weigh?” he asks.

“Fifty,” I reply, stopping for a bit. We always leave out the one hundred.

His eyebrows rise. “Can you beat Kuchera?” he asks, eyebrows coming down. He knows I can. What he doubts is that I can make 147 without losing my strength.

“Yes,” I reply, thinking how much I like Kuch and how badly I can munch his body, and wishing we didn’t have to wrestle off for the spot, but not wishing it too hard because it will only be for this one match.

Coach and most of the team and a lot of other people at school were pretty pissed off at me for deciding to graduate a semester early. I’ll miss a couple league matches and the district and state tournaments. But Doug Bowden, our number-two guy at 154, is undefeated in his junior varsity matches and is going to put a lot of varsity guys on their backs once he gets the chance. I thought about this before I made my decision.

Coach isn’t mad anymore and neither is anybody on the team. Dad figured from the start it was okay as long as I was sure. And Carla thought it was a good idea, especially since I’d be working full-time and earning money to help Dad. It worries my mom a little, but that’s her nature.

Senior English is a nice class. We read novels and short stories and we write essays and discuss. Gene Tanneran, our teacher, says we must articulate with both pen and tongue, so he grades us on class participation.

Gene continually tries to bring up his two favorite subjects for ridicule, Richard Nixon and Spiro Agnew. I figure the two sonsabitches aren’t worth my time. Gene and Thurston Reilly, who is editor of the school paper and wants to be a muckraking columnist, get the biggest kick out of Nixon’s “Checkers” speech, in which the big dick swears that the guys who contributed to his slush fund never asked him for any special favors, points out his sweet wife’s respectable Republican cloth coat, and vows ardently never to return Checkers, the lovable cocker sent to him by a Texan who must have been a real dog-hater.

Gene shows the film once a month and he and Thurston just howl. I thought it was funny the first time, but now I think it’s sad. The way I see it, if people ever saw or heard that speech and were still dumb or evil enough to vote for the bastard, they deserve everything he’ll ever do to them.

Gene’s also got a record of Agnew’s speeches. He figures Agnew should be public enemy number one for making parents hate and fear their own children. Gene loved it when I told him my dad thinks I’m a pretty good guy and Agnew is a flaming asshole.

Tanneran wrestled in high school and college. He asks me what I weigh as we walk out of class.

Terry Davis is an American novelist who lives near Spokane, Washington, and is a professor emeritus of English at Minnesota State University, Mankato (MSU Mankato), where he taught creative writing—fiction and screenwriting—as well as adolescent literature. Davis, who has been a high school English teacher and a wrestling coach, is the author of three novels for young adults: Vision Quest, Mysterious Ways, and If Rock and Roll Were a Machine. He has also written Presenting Chris Crutcher, a biography of the respected young-adult author.

"[A] sunny and deft novel for lovers of wrestling, wit and hang-loose talent."

"In terms of sheer charm, it would be difficult to match the characters in this first novel. Told with tenderness and set in the beauty of Washington State, the novel is most memorable for clearly evoking, much as Judy Blume does, a certain stage of growing up."

"Honest and funny and altogether true to life...about people so thoroughly decent and attractive that one wants to reach out and embrace them all."

“Vision Quest is the truest novel about growing up since The Catcher in the Rye and it's a better novel about wrestling and wrestlers than The World According to Garp."

– John Irving, author of The World According to Garp

By Terry Davis
LIST PRICE $19.99
PRICE MAY VARY BY RETAILER