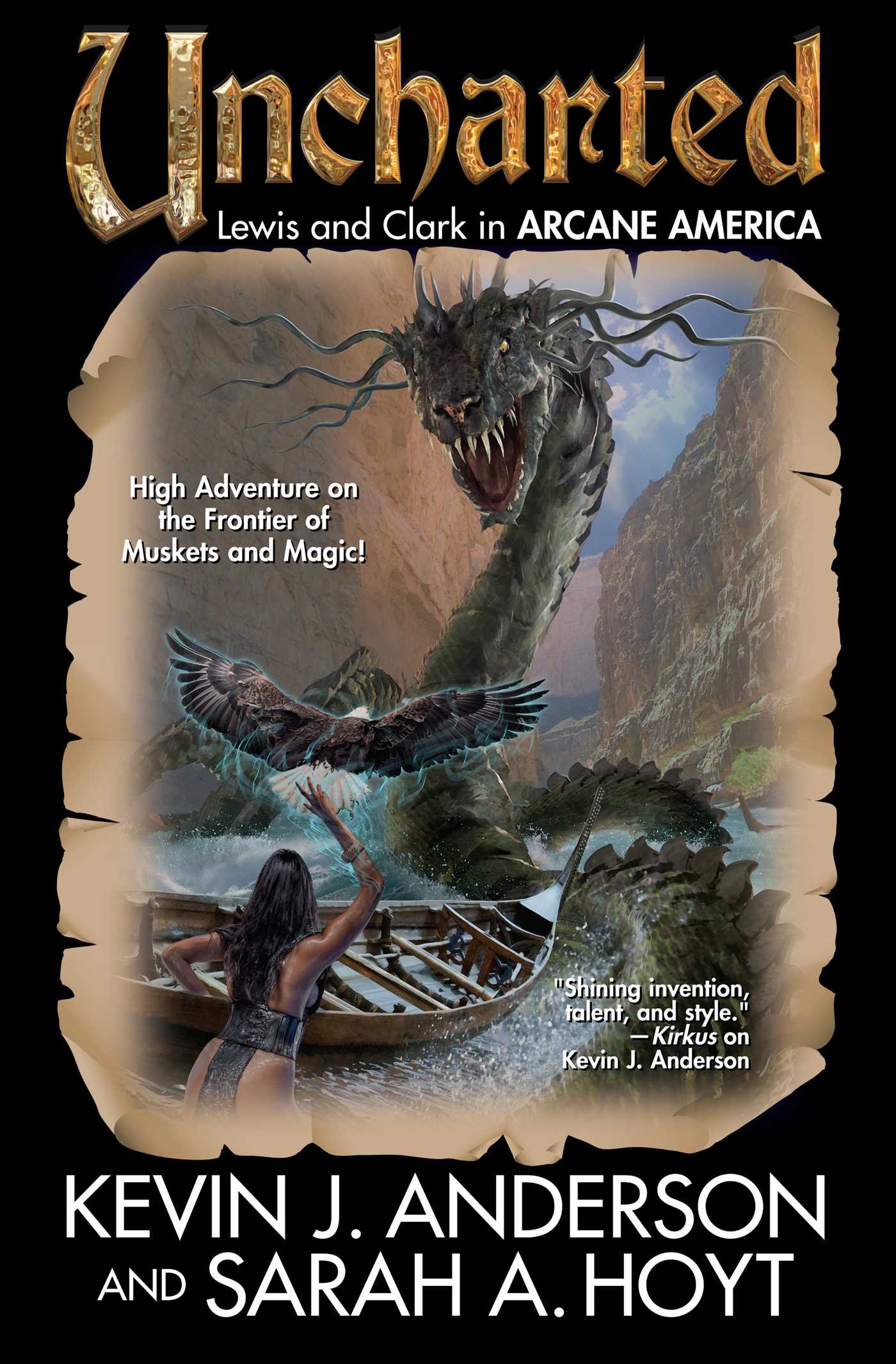 Book #1 of Arcane America
By Kevin J. Anderson and Sarah A. Hoyt
Published by Baen
Distributed by Simon & Schuster
LIST PRICE $25.00
PRICE MAY VARY BY RETAILER

After Halley’s Comet was destroyed in a magical battle in 1759, the backlash separated the entire New World from the Old in an event known as The Sundering. Now isolated from the rest of the globe, America has become a very different place, where magic works and history has been changed forever.

It is 1803—a new 1803. Young Meriwether Lewis, footloose and intrigued, goes to hear a lecture in St. Louis by the venerated old wizard Benjamin Franklin. Franklin’s talk is disrupted by the attack of a winged fire-breathing beast, much like legends from Lewis’s own Welsh heritage. In the aftermath, Franklin tells the young man that he knows of a great, growing evil that lurks in the uncharted Arcane Territories west of the Mississippi.

Using his own vast fortune, Franklin commissions Lewis and his own talented partner William Clark to embark on a remarkable voyage of exploration, to meet and document the indigenous tribes, to find a route all the way to the Pacific Ocean—and perhaps beyond the magical veil to Europe again—and to stop the growing evil that is filling the American West.  For while the Sundering separated the rest of the world and granted the original colonists unexpected magical gifts, sorcery inspired by native legends has also been ignited. And the Arcane Territories may hold unparalleled dangers for the expedition, both natural and magical.

Accompanied by the brilliant shape-shifting sorceress Sacajawea, Lewis and Clark set off on an unparalleled adventure across a landscape that no European has ever seen.

About Uncharted:
"History and mythology meld admirably, leading to a satisfying conclusion. This hardy adventure establishes a world ripe for many more rousing stories."—Publishers Weekly

"With a light and brisk narrative that propels its heroes through a number of increasingly dangerous situations, this combination of alternate history and fantasy should appeal to fans of Eric Flint, Harry Turtledove, and historical fantasy in general."—Booklist

“While delivering plenty of action that approximates the best of cinematic fantasy, Hoyt and Anderson also strive for—and achieve—a kind of gravitas that suitably reflects the majesty of an untrammeled continent. Their descriptions of raw nature and its emotional repercussions on the humans are subtly poetic without being overblown. The native tribes are depicted in authentic ways, especially the people of Sacagawea. . . .The characterization of all the cast members is deep and revelatory of human nature. . . .There is also humor amidst the seriousness . . . [Anderson and Hoyt’s] prose is a clear-eyed, sturdy naturalism meshed with flights of vivid unreality . . . filled with not only slambang adventures but also a kind of rational optimism that has become rare in genre works these days. . . Hoyt and Anderson, a kind of de Camp and Pratt for the twenty-first century, convey these ideals without lectures or sermons, embodying them in principled people doing exciting things.”—Locus

"Anderson delivers action, engaging characters and credible fantastic worlds in spades . . . not to be missed."—Publishers Weekly

"Anderson has become the literary equivalent of Quentin Tarantino in the fantasy adventure genre."—The Daily Rotation

"Prepare to be entertained." —Charlaine Harris

“Delivers solid action and will certainly satisfy.”—Booklist on The Winds of Dune

About Sarah A. Hoyt:

“[Three Musketeers creator] Alexandre Dumas would give [Sarah A. Hoyt] a thumbs up.” —Steve Forbes

"First-rate space opera with a moral lesson. You won't be disappointed."—Glenn Reynolds, Instapundit.com

Sarah A. Hoyt, under various names, is the author of over 30 books—she gets tangled up when she tries to count them and always misses a couple—in science fiction, fantasy, mystery, romance, and historical fiction. Her first published novel, Ill Met by Moonlight, was a finalist for the Mythopoeic Award. Darkship Thieves, the first novel of her popular Darkship Thieves series is a Prometheus Award Winner. She’s published over 100 short stories in magazines such as Analog, Asimov’s, and Weird Tales (and others, some no longer in existence), as well as an array of science fiction, fantasy, and mystery anthologies. Sarah was born and raised in Portugal and now lives in Colorado, near her two grown sons, with her husband and a varying clowder of cats. English is her third language, but she can swear fluently in seven. When not laying down words on the latest manuscript, she can be found refinishing furniture, walking, or studying history.

Book #1 of Arcane America
By Kevin J. Anderson and Sarah A. Hoyt
Published by Baen
Distributed by Simon & Schuster
LIST PRICE $25.00
PRICE MAY VARY BY RETAILER

More books from this author: Sarah A. Hoyt