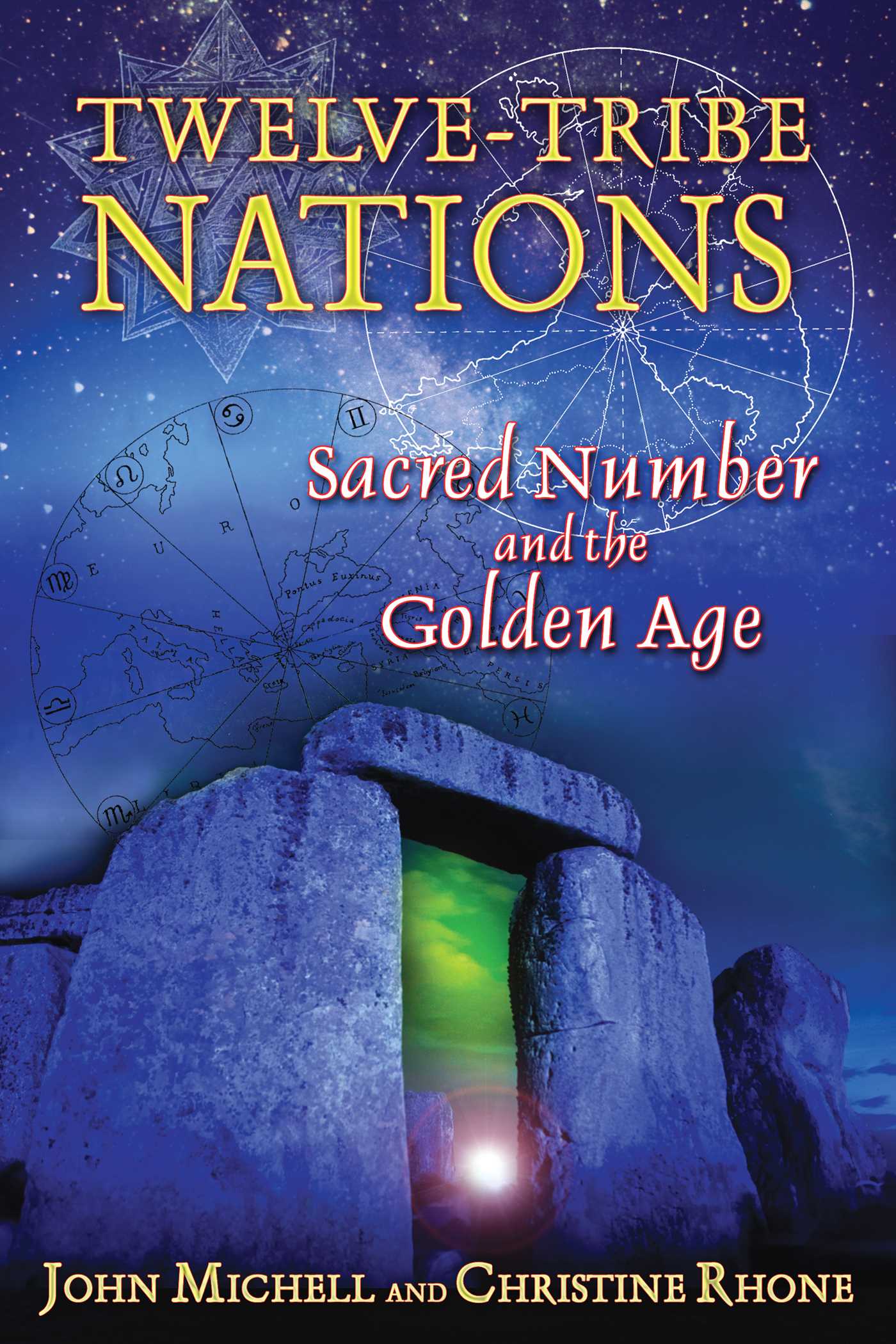 • Connects the zodiac, the twelve months of the year, and the political divisions of ancient nations

• Explores the sacred geography of ancient landscapes in Europe and Israel

Throughout the world--in countries as far apart as China, Ireland, Iceland, and Madagascar--there survive records and traditions of whole nations being divided into twelve tribes and twelve regions, each corresponding to one of the twelve signs of the zodiac and to one of the twelve months of the year. Best known are the twelve tribes of Israel under King Solomon, but there have been many others. Wherever they occur, they are associated with an ideal social order and a golden age of humanity.

Exploring examples of these twelve-tribe societies, John Michell and Christine Rhone explain the blueprint for this organizational structure and look at the musical, mythological, and astronomical enchantments that kept these societies in harmony with the cosmos. They also examine the astrological landscapes of classical Greece, the aligned St. Michael sanctuaries of Europe, and the true site and function of the Temple in Jerusalem. They show that the sacred geography of these sites was part of an ancient code of knowledge that produced harmony between nature and humanity and is as relevant to our present and future as it was to our past.

Twelve Saints and the Enchantments of Britain

A zodiacal circle, formed by 12 knights, saints, hermits, or missionaries, is a recurrent image in old British legends. Like the Grail, it is associated with periods of regeneration and sacred order, when the countryside is prosperous and life is experienced on a high level of spiritual intensity. At such a time King Arthur set up his Round Table, a model of the divine cosmos, as the central symbol in his court of 12 knights, each representing a zodiacal constellation. This event belongs to no single age or locality, for relics of an Arthurian myth cycle occur in local traditions and place-names in Celtic landscapes from Scotland to Brittany. Many different towns and hilltops have claims to have been Camelot, Arthur’s citadel, and no doubt many of these claims are justified, for the 12-part story of Arthur and his companions appears to have been established and celebrated throughout the year by the various Celtic tribes or tribal unions within their own territories.
Medieval chroniclers told of the enchantments of Britain, and behind their tales of adventurous or culture-bearing heroes can be detected a theme of revival through missionary groups, often twelve in number, who aspired to re-create that former state of enchantment, when initiated bards by their musical arts held earthly life in tune with the harmony of the heavens.
The most famous story is of St. Joseph of Arimathaea’s mission. Shortly after the Crucifixion, he and eleven companions were sent by the apostle St. Philip to establish Christianity in Britain. They reached Glastonbury, which was then an island hill surrounded by the Somerset lakes and marshes, and on one of its peaks, Wirral or Weary-all hill, St. Joseph planted his staff. It grew to become the first of the Glastonbury thorn trees, which blossom at Christmastide. The local ruler gave St. Joseph an area of land amounting to 12 hides, one hide or 12 acres for each member of his party, and at its center the missionaries built a simple church, surrounded by 12 huts in which they dwelled.
This 12-fold pattern is deeply rooted in Celtic mythology and the Grail legend. King Arthur fought 12 battles, conquered 12 kingdoms, and slew the 12 kings of Orkney, whom Merlin then commemorated by a monument with 12 effigies. In the Grail romances, Sir Galahad is said to have founded the order of the Holy Grail, appointing 12 knights as guardians of the Round Table, which St. Joseph first established in Britain. In the High History of the Holy Grail are named 12 brother knights, one of whom, Alain, was Percival’s ancestor. They possessed 12 castles corresponding to the zodiacal signs.
When these fragments of old lore are pieced together, an overall picture emerges. A disenchanted wasteland is settled by 12 holy men who live as hermits around a central shrine. Through their influence the wilderness is made fertile, and some time later the pattern of their original settlement is magically reproduced across the whole country by a circle of 12 great monasteries around a national sanctuary. So we are told--both in the Grail legends and in the early lore of the Celtic Church--but in all such accounts there is a missing ingredient. We are never told just how this development occurred, how a circle of 12 humble hermits expanded to encompass an entire people and countryside.
A key to the mystery is found in the most distinctive possession of the Celtic Church: its musical tradition. Wherever the Celtic missionaries settled, their first concern was to build a simple oratory at the center of their ring of cells. There they kept a ceaseless vigil, succeeding each other in turn throughout the hours of day and night, and at the same time they maintained a perpetual sacred chant. A chant is an intonation for the weaving of a spell. It is the most powerful ally of priest craft, and its potential was clearly recognized by the Celtic Christians, for during the whole history of their Church, from the earliest times to the days of grand monasteries and abbeys, every community upheld a perpetual chant and lived under the spell of sacred music. Even in the seventh century, not many years before the Celtic Church was disestablished at the Synod of Whitby, St. Aidan of Lindisfarne chose 12 boys from among his pupils to be his apostles in the evangelizing of northern England. These 12 were probably among other things Aidan’s chief choristers.
In the many stories of how Christianity was brought to various parts of Britain and other countries by bands of 12 saintly hermits one can detect a musical undertone. The Celtic Church in Britain drew its traditions from the East rather than from Rome, and the greatest asset of the eastern Church is the canon of music and chanting that is said to have been adapted from the temple music of ancient Egypt. The temple chant was astrologically arranged in 12 parts under the 12 zodiacal signs and months of the year. It was performed by 12 master choristers, each one the leader of his own choir. Their musical tradition was inherited and revived by the early Church. Missionary groups of 12 brought the sacred chant to many countries, and the legends of Britain testify to its early appearance in these islands.
John Michell

Christine Rhone is an artist and writer with a special interest in landscape symbolism. The translator of several important works, including Jacques Le Goff’s Saint Francis of Assisi, Antoine Faivre’s Theosophy, Imagination, Tradition, and Jean Richer’s Sacred Geography of the Ancient Greeks, she lives in ­­­London.

“John Michell and Christine Rhone’s book combines vision and tradition to produce a comprehensive guide to what they term ‘the science of enchanting the landscape,’ as practiced across the ancient world. Their book is indispensable to anyone seeking an understanding of the way in which the threads of astrology, cosmology, number, and music were combined, in many countries and at many different periods, to provide a design for the fabric of society.”

– Pete Stewart, author of The Spiritual Science of the Stars

“In this fascinating book, John Michell and Christine Rhone have assembled overwhelming evidence for the existence of a vast, ancient, mystical science of number and astrological geometry that once encompassed the entire earth.”

– Herbert Bangs, author of The Return of Sacred Architecture

“This is a key text on how sacred number once shaped human societies before the onset of modernity. Twelve-Tribe Nations reveals numerical and geometrical recipes underlying the ancient practice of the ‘enchantment’ of landscapes and cultures, which stands in contrast to the exploitation of modern landscapes and citizens.”

– Richard Heath, author of Sacred Number and the Origins of Civilization and Matrix of Creation

“. . . an enjoyable romp through the collective memory of tribe, myth, sacred landscapes and the deep memories of a past golden age.”