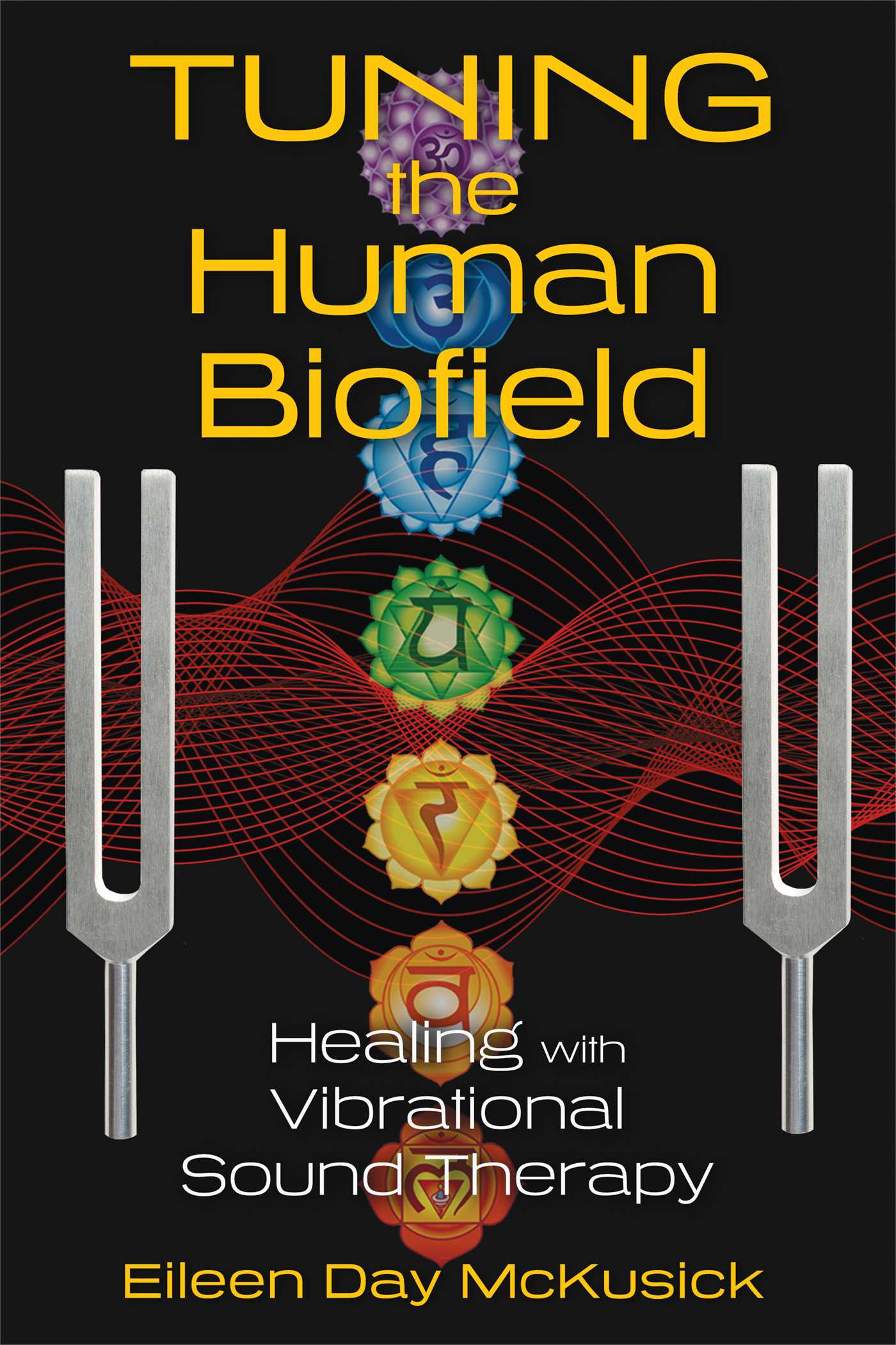 A guide to the practice of Sound Balancing, using tuning forks to clear trauma stored in the human energy field

• Provides a precise map of the energetic biofield that surrounds the body, showing where specific emotions, memories, traumas, and pain are stored

When Eileen McKusick began offering sound therapy in her massage practice she soon discovered she could use tuning forks to locate and hear disturbances in the energy field, or biofield, that surrounded each of her clients. She found these energetic disturbances correlated with the emotional and physical traumas her clients had experienced throughout their lives, the biofield acting as a record of pain, stress, and trauma from gestation onward. Passing the forks through these areas in the biofield not only corrected the distorted vibrational sounds she was hearing but also imparted consistent, predictable, and sometimes immediate relief from pain, anxiety, insomnia, migraines, depression, fibromyalgia, digestive disorders, and a host of other complaints. Now, nearly 20 years later, McKusick has fully developed her sound healing method, which she calls Sound Balancing, and created a map of the biofield, revealing the precise locations where specific emotions, memories, ailments, and traumas are stored.

In this book, McKusick explains the complete practice of Sound Balancing and provides illustrations of her Biofield Anatomy Map. She details how to use tuning forks to find and clear pain and trauma stored in the biofield. She reveals how the traditional principles and locations of the chakras correspond directly with her biofield discoveries. Exploring the science behind Sound Balancing, she examines scientific research on the nature of sound and energy and explains how experiences of trauma produce “pathological oscillations” in the biofield, causing a breakdown of order, structure, and function in the body.

Offering a revolutionary perspective on mind, energy, memory, and trauma, McKusick’s guide to Sound Balancing provides new avenues of healing for energy workers, massage therapists, sound healers, and those looking to overcome chronic illness and release the traumas of their past.

We will now go through the biofield anatomy in depth, starting at the feet and working our way up. In each section we will explore what I find in both the front and back of the body. Information found at the outer edge of the biofield--around five feet on most people--relates to gestation, birth, and early childhood. Information found close to the body is current or more recent. All other years fall in between, like rings in a tree. As we generate the information it moves away from us. The fields of adults and children are about the same size, but the rings get smaller as we get older.

Each side of each chakra is like a file drawer record of a specific emotion or state of mind, and we energize different parts of our bioplasmic body depending on what we think, feel, and experience. When we routinely spend a lot of time in a particular state of mind, for example guilt-driven overdoing (right hip), we create an imbalance in the field that can lead to a breakdown of order, structure, and function in that region. In sound balancing we are able to detect these areas of imbalance because of the resistance present and the way the tone shifts in the tuning fork; and we are able to correct them by gently supporting the energy’s return to the neutral midline down the center of the body while modulating the tonal quality to a more balanced expression.

The left side of the root chakra speaks of things we want to be doing, being, or having, but are not--such as wanting to start one’s own business and thinking about it a lot but not taking any action steps. This would immediately show up off the left side of the body. A past event that leads to imbalance could be something like a child who wanted to be a professional snowboarder and was good enough but lived too far away from a mountain to get there regularly and whose parents were too busy with other things to support this dream. All that energy of desire was experienced inwardly but never manifested outwardly. Energy stuck on this side is like spinning tires, the rubber isn’t getting on the road, there is an inability to move forward toward goals, dreams, and desires.

I often see this circumstance in people who have eating disorders/body-image conflicts. There is a strong inclination to engage in different behavior but an inability to do so due to an inner battle and sense of powerlessness. I recently treated two women in the same day who were suffering from left side sciatic pain, and they had the same energetic imbalance in this area due to an eating disorder.

The right side of the root chakra speaks of being busy but not necessarily doing the things we want to be doing. A person who is very busy will have a lot of resistance around this hip. There is a place about fourteen to eighteen inches off this side of the body that I call “busy mind.” This is something that almost everyone has, except for skilled meditators.

The busy mind shows up as a profound imbalance in the energy body. Johan Boswinkel, founder of the Institute for Applied Biophoton Sciences, calls thinking “a psychological disease.” Most thinking is nonproductive, nonbeneficial looping that involves worry about the future, to-do lists, concern about what other people think, and inner judgment, guilt, and self-criticism. Most contemporary Americans mentally beat themselves up on a regular basis, and while they might extend compassion to the people around them, they seem unable to include themselves in that equation. This, to me, is one of the biggest problems in our culture: people don’t know how to quiet their minds. Minds go and go, a process that removes people from the present moment and wastes a lot of energy.

Just inside the busy mind region is the busy body region, which occupies the distance from the surface of the body to about twelve inches out. This is an area that will be energized if the person is always in motion. People who have a lot of energy in this area are often trying to avoid their feelings, especially sadness. As long as they stay in motion they stay out in front of the feelings, which tend to settle on them when they stop.

I just ran into a friend I hadn’t seen in a while who was limping and using a cane. I asked him about it and he said he needed his right hip replaced. I said, “Ah, the hip of chronic overdoing,” and he said, “Exactly--I’ve been overdoing my whole life.” So here he was, only sixty years old with a worn-out right hip. People who are very busy will often end up with right hip issues, including sciatica and arthritis.

The back of the root chakra relates to our physical home. If there is a lot of static or a diminished tone here, it usually relates to some kind of stress regarding the home: a renovation, clutter, needing but not being able to afford a new roof, an uncomfortable roommate situation, moving. It can also speak of a tailbone injury, which will show up as static even many years after the accident itself.
Eileen Day McKusick

Eileen Day McKusick is a researcher, inventor, writer, educator, and practitioner who has been studying the effects of audible acoustic sound on the human body since 1996. She is the originator of a unique sound therapy method called Biofield Tuning (formerly sound balancing) that uses tuning forks to detect and correct distortions and static in the biofield (human energy field/aura). She is the author of the book Tuning the Human Biofield: Healing with Vibrational Sound Therapy. Eileen teaches Biofield Tuning nationally and internationally and speaks at conferences about sound, consciousness, and cosmology. She has an MA in Integrative Education and has currently paused her pursuit of a PhD to write her second book. She continues to pursue research and has partnered with a group of scientists to apply the scientific method to her Biofield Anatomy Hypothesis.

“Modern science is finally recognizing that energy constitutes the blueprint of the physical body. Meanwhile, the energetic vibration of sound can be used to change that blueprint in ways that foster health and well-being. Genes literally express themselves in different ways when exposed to specific kinds of sound. Tuning the Human Biofield is a groundbreaking introduction to the art and science of applying these principles. It will take you on an intellectually juicy ride.”

“Tuning the Human Biofield is a superb introduction to the human energy field and its modification by sound vibrations. McKusick’s book is a highly valuable resource for patients and practitioners alike.”

“This book takes the reader by the hand on a quick tour through the ‘wonderland’ of quantum theory, vibrational therapies, the electric universe, biofield science, and other frontier science topics. Autobiographical bits and pieces make for enjoyable and easy reading. . . . a promising new modality to reduce stress and improve energy flow toward greater wellness.”

“This book integrates core universal truths with scientific principles to capture the essence of sound healing. As a pioneer in the field of sound healing, the author combines knowledge, expertise, curiosity, and unique personal experience into an easy-to-learn method that can offer powerful changes for the reader.”

“The time has come for detailed explorations by skilled, sensitive, and intuitive individuals who are willing to venture into the unknown, to go beyond the mainstream, and report on the discoveries they make. Eileen McKusick has all of the tools such an explorer requires, including a skeptical and scientific grounding. Enjoy this feast of new knowledge--it is guaranteed to stick to your ribs!”

“Eileen Day McKusick has meticulously gathered biofield research that supports the efficacy of sound balancing. Tuning the Human Biofield is comprehensive yet easy to read. With this, sound-on-body becomes understandable and practical for health care professionals and individual self-healing.”

– Joshua Leeds, author of The Power of Sound

“Tuning the Human Biofield is a profoundly insightful and inspiring work as well as a tremendous leap forward for the healing sciences. If I were designing an alternative medicine curriculum, this text would be required reading. In what is arguably the most comprehensive book ever written on tuning fork therapy, Eileen Day McKusick not only shows us the door to healing ourselves and unlocking our potential as energetic beings, but she also takes us by the hand and, brilliantly and eloquently, escorts us into new realms of possibility.”

“McKusick’s audacity and confidence coupled with serious in-depth research and humility puts her at the forefront of cutting-edge science and healing. This book explains and enlivens our understanding of interconnectivity and consciousness and helps us deeply understand how we humans function, and how we can function better.”

“"...we now know that matter is basically solidified energy. And that realization has brought the various therapeutic uses of sound, such as music therapy, back into favor....this book provides a detailed look at how sound helps release biofield disturbances.”

“Equipped with a tuning fork and years worth of observational and scientific references, Tuning the Human Biofield is a determined intellectual and intuitive journey into the healing nature of therapeutic sound.”