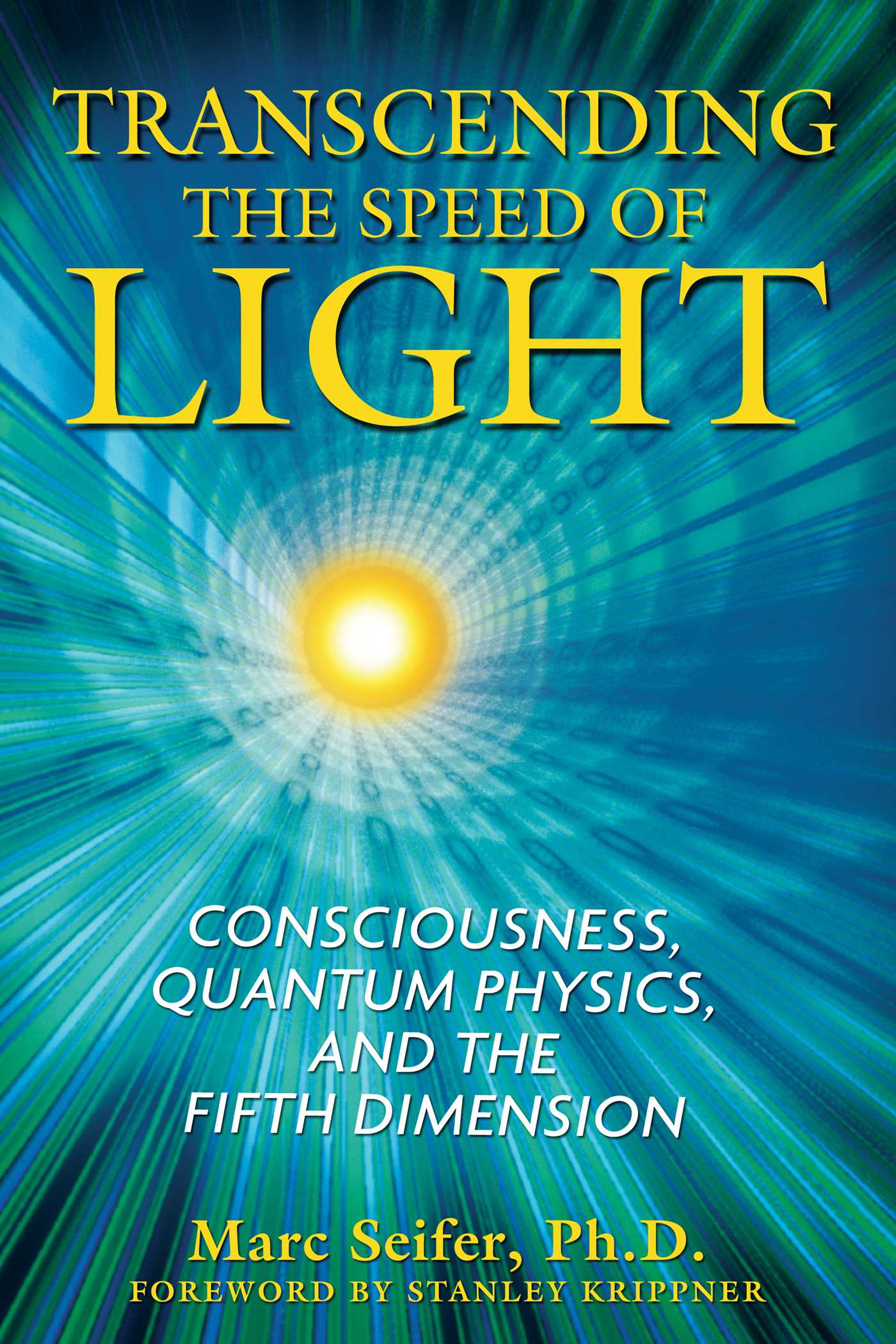 Since the introduction of Descartes’ dualism in the seventeenth century, the mind and the physical world have been viewed as disconnected entities. Yet qualities of mind such as awareness, purposeful action, organization, design, and even decision-making are present within the structure of matter and within the dimensions of space and time.

The space-time continuum of scientists generally ignores the realm of the mind, though phenomena such as imaginary numbers, used by Einstein to combine space with time, are concepts that only exist in the mind. Marc Seifer contends that the inadequacy of four-dimensional models to account for our experience of mental phenomena points to the consciousness of the mind as a higher organizing principle, a fifth dimension where thoughts are as real and quantifiable as our familiar physical world. He shows that because thought enables us to move backward and forward through time--reflecting on the past and making plans for the future--this fifth dimension of mind breaks the laws of relativity, thereby transcending the speed of light. His extensive study of this fifth dimension ranges from relativity and ether theory to precognition, telepathy, and synchronicity, all from the perspective of the conscious universe.

CONSCIOUSNESS AND THE ANTHROPIC PRINCIPLE

Developing a Theory of Consciousness

Consciousness is not an either/or concept. The act of becoming conscious lies on a continuum, starting with simple awareness and ending with advanced thinking and volitional activity. Even the first one-celled organism that moved itself into the warmth of the Sun was to some degree conscious. Certainly perception, purpose, awareness, and decision-making were evident, even if the one-celled being reacted “automatically” or instinctively. Something inside that organism was conscious (or programmed by conscious forces) to some extent. This “something,” which Freud would call the unconscious, “thinks.”
Herbert Read and Jean Piaget hypothesize that humans evolved from lower animals because of intentional movements. They link intelligence to the organism’s initial reaction to the environment:

Intention is the essential characteristic of intelligence. . . . Piaget
shows that intentional adaptation begins as soon as the child transcends
the level of simple corporal activities such as sucking itself,
listening, looking and grasping and acts upon things and uses the
interrelationships of things.1

The neurophysiologist A. R. Luria links consciousness and intentional adaptation to the onset of language and the ability to think in words. Once the left temporal lobe adapted itself to specialize in language--and there is great debate as to when this occurred--humans, free from the present, were able to represent both the outside world and interior states in mental symbolic fashion. This enabled them to begin to manipulate concepts instead of actual physical things. Memory was further enhanced, and rational thought was able to advance at a more rapid rate. The new generation was able to stand on the shoulders of its ancestors. While all other animals are bound by instinctual forces and the immediate present, humans are able to reflect on the past, consider multifaceted aspects of the present, and project into any of a variety of possible futures. This increase in linguistic ability caused a corresponding increase in cerebral complexity.

Mind and Matter
Stepping back into the realm of biophysics, we can state with certainty that DNA’s ability to direct the metabolism of the cell, produce the proper enzymes and amino acids, replicate itself, and also ultimately orchestrate the development of the fertilized egg into a fully developed organism is a conscious display of the highest order. Memory, intent, organization, awareness, design, and purpose are each fully developed in this instance. The motive force inherent in DNA is a form of intelligence, and its structure is imbued with consciousness. Although the nature of its consciousness is different in many qualitative ways from the psyche of our brains, it is DNA that directs the development of the human psyche. Thus, it may be considered a more primary form of consciousness.
MIT professor of computer sciences and self-made millionaire Ed Fredkin hypothesizes that information is even more primary than matter and energy. Subatomic particles, according to this view, can be seen as “bits of information,” just like those found inside “a personal computer or pocket calculator. . . . The behavior of those bits, and thus, the entire universe,” Fredkin says, “are governed by a single programming rule.”2 Through eternal recapitulation and incremental transformations, the “pervasive complexity” that we see as life emerges.

The more I examine it and study the details of its architecture, the
more evidence I find that the universe in some sense must have
known that we were coming.3

David Chalmers (professor of philosophy and director of the Centre for Consciousness at the Australian National University) echoes this idea by stating that “the laws of physics might ultimately be cast in informational terms. . . . It may even be that a theory of physics and a theory of consciousness could eventually be consolidated into a single grander theory of information.”4 This idea had already been expanded by biochemist, philosopher, and cancer researcher Alfred Taylor, who served as the head of cancer research at the Biochemical Institute at the University of Texas from 1940 to 1965. It is Taylor’s supposition that since all matter is derived from “a common source . . . we are forced to the conclusion that organization is the determining factor, whether energy appears as hydrogen, lead, a daisy, or a man. Something must distinguish one from the other, and that something is organization, meaning, consciousness.”5 For Taylor, life quite simply cannot be a chance process.
Taylor points out that the bodies of living organisms are constantly turning themselves over. In a human being, the components of every cell change every seven years.

Since the matter aspect of the body is constantly changing, this fact
alone discredits the idea that matter is the primary value. . . . How
then can consciousness or intelligence be a mere product of the
functioning of the nervous system when this system is compounded
of transitory materials? The meaning of the form transcends matter
changes. The same being continues but not the same materials. . . .
The universe is an organized system. . . . The principle of progressive
increase in [order and] meaning is evident in both organic and
mineral evolution.6

Surely the interaction of electrons with photons, protons, and neutrons is a highly ordered procedure. Somehow, within the structure of the electron, it “knows” that it must repel other electrons and be attracted to positively charged protons. Decision-making occurs at the level of the electron whether or not the electron itself “thinks.” One way or another, it is programmed to respond in a predictable and lawful way. There is a basic awareness inherent within the construction of the electron, for if this were not true, the structure of matter would have no order. The very fact that the periodic table of elements exists is proof of conscious design, purpose, order, and intent in the creation of the elements. By definition, since we see components of consciousness within the structure of matter, we can therefore conclude that aspects of consciousness are inherent there as well.
Marc Seifer

“Marc Seifer has made the difficult easy to understand as he covers such broad topics as cosmological coincidences, new theories on gravity, and higher states of consciousness. This book generates fresh ideas on the link between thoughts, the physical universe, and the speed of light. Transcending the Speed of Light is a bold new adventure into the exciting world of consciousness exploration.”

“I highly recommend this book to any and all readers who are seriously interested in the puzzling problem of the nature of mind and consciousness. I most enthusiastically endorse Marc’s work.”

“How is it possible for consciousness to exist in the physical universe? This is the classic mind-body problem that has eluded philosophers for many generations. Now it appears that answers are within reach. The depth of Marc Seifer’s scholarship and the clarity of his thinking make this book a worthwhile read for anyone interested in the frontiers of consciousness research.”

"The author goes to great length to encourage the reader to connect the dots between phenomena understood and occurrences and relationships more abtruse. It is provocative and thoughtful and it should be showcased for its colorful cover in the Psychology, Science, and Philosophy areas of our stores."

"This is not a volume to be undertaken lightly, but the author does an admirable job of presenting the information in a manner that keeps the reader's eyes from glazing over."