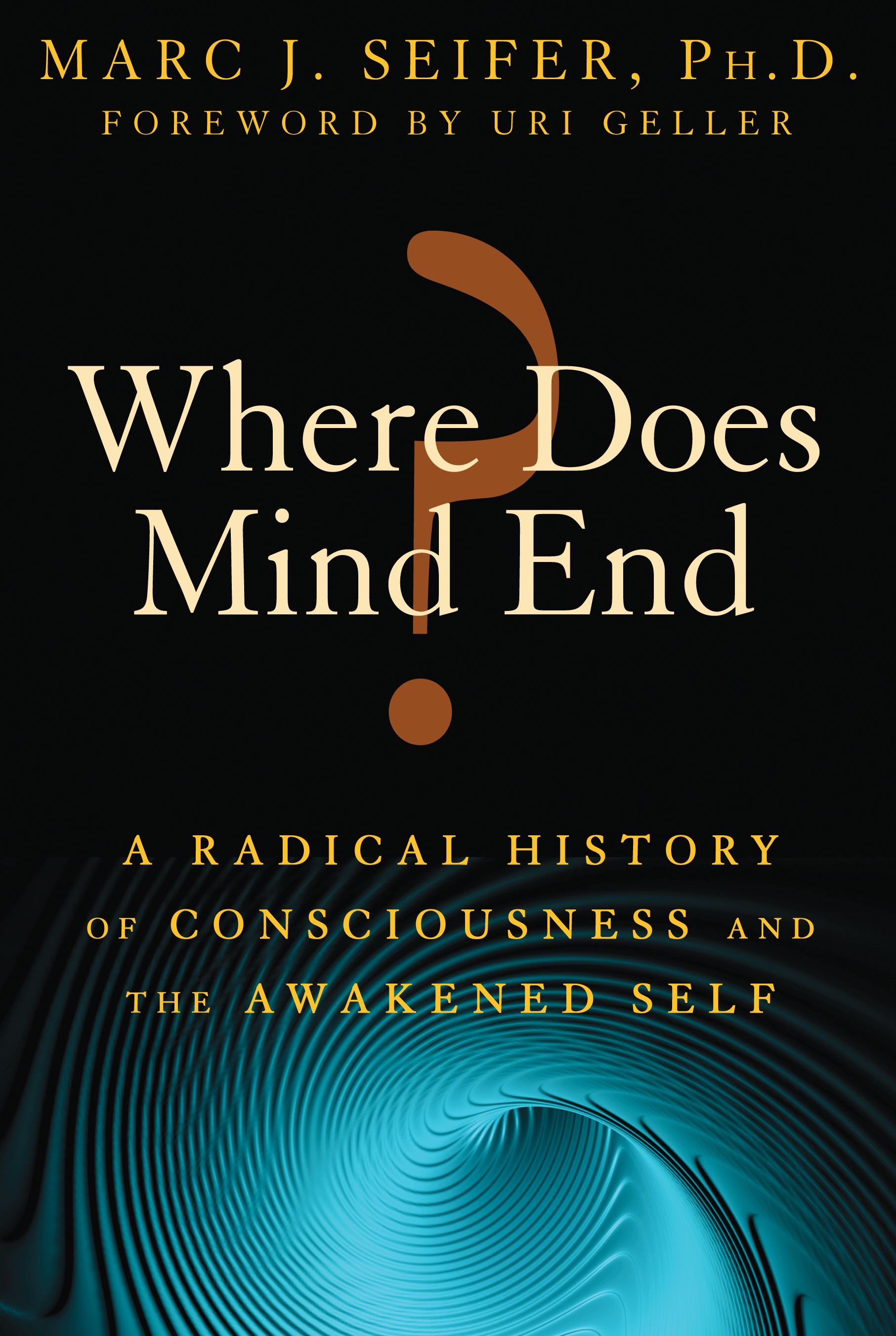 A new comprehensive model of mind and its nearly infinite possibilities

• Shows that we have consciousness for a reason; it is humanity’s unique contribution to the cosmos

The culmination of 30 years of research, Where Does Mind End? takes you on an inward journey through the psyche­--exploring the highest states of consciousness; the insights and theories of ancient and modern philosophers, psychologists, and mystics; the power of dreams, chi energy, tarot, and kundalini yoga; and proof of telepathy and other facets of parapsychology--to explain the mystery of consciousness and construct a comprehensive model of mind and its nearly infinite possibilities.

Starting with the ancients and early philosophers such as Zoroaster, Aristotle, Descartes, and Leibniz, the author examines models of mind that take into account divine and teleological components, the problem and goal of self-understanding, the mind/body conundrum, and holographic paradigms. Seifer then moves to modern times to explain the full range of Freud’s psychoanalytic model of mind, exploring such ideas as the ego, superego, and id; the unconscious; creativity; and self-actualization. Using Freud’s psychoanalytical model as framework, he reveals an overarching theory of mind and consciousness that incorporates such diverse concepts as Jung’s collective psyche; ESP; the Kabbalah; Gurdjieff’s ideas on behaviorism and the will; the philosophies of Wilhelm Reich, P. D. Ouspensky, and Nikola Tesla; the personality redevelopment strategies of Tony Robbins; and the Dalai Lama’s and Rudolf Steiner’s ideas on the highest states of consciousness. Recasting psychology as a vehicle not for mental health but for higher consciousness, he shows that by casting off the mechanical mental operation of day-to-day life, we naturally attain the self-integration to which traditional psychology has long aspired. By entering the true path to fulfillment of the soul’s will, we help the planet by transforming ourselves and raising our energy to a higher realm.

A brainwave is an electrical oscillation of the brain as it changes its polarity from positive to negative at a rapid rate. For instance, in the case of being awake, we are in a state known as Beta whereby the brain oscillates at 14-60 cps. Take a moment to watch the second hand of a clock traverse the dial. When the second hand covers a distance corresponding to one second, your brain has shifted its polarity somewhere around twenty times. This is fascinating for a variety of reasons, one being that we remain unaware that our brain is oscillating or, in a sense, flickering, as we perceive the world in continuous, uninterrupted fashion.

When one falls asleep, the brain goes through four stages. Essentially, it slows down to a very slow beat and at that moment the person becomes unconscious. Then the brain speeds up and returns to the Beta state. This is the REM state of dreams. The term REM, rapid eye movement, refers to the eyeballs actually following the action in a dream. This state is called paradoxical sleep because the brainwave state of the dreaming person greatly resembles the brainwave state of being totally awake. The REM state also suggests synchronization between the retina in the eye in the front of the brain and the visual cortex/occipital lobe in the back of the brain.

The brain is under the influence of two dominant rhythms, the circadian rhythm, or day/night cycle modulated by the pineal gland in the midbrain, and the ultradian rhythm, or ninety-minute REM cycle, modulated by the pons in the brain stem. Everyone falls asleep every night and awakens every morning. That is the circadian rhythm. Some people are day people; others are night people. If you enjoy getting up at 6:00 in the morning, you can consider yourself a day person. If you love to stay up to 1:00 or 2:00 in the evening, you are a night person. This diurnal cycle most likely influences the ultradian rhythm, which continues subliminally during the day. This means that even after you wake up you still go through subtle highs and lows every ninety minutes.

Studies have been done linking the circadian rhythm to life-threatening toxicity levels. In one experiment a lethal dose of a poison was given to a set of rats, some during their high point and others during their low point. Researchers found that a larger percentage of rats died when given the dose when they were at their low point (Zhang et al., 1993). Similar findings suggest that delicate operations should be done when a person is at their high point in the circadian rhythm.

This overarching day/night rhythm involves the production of certain neurotransmitters such as melatonin, which increases in sleep production, and serotonin, which is associated with dreams and an uplifted mood, and these neurotransmitters may also modulate the ultradian rhythm. This may be the reason why dreams tend to get longer toward the morning. Even though we dream every ninety minutes, the length of each dream within the cycle tends to increase as the morning approaches. When a person hits a low point in late afternoon and feels a strong urge to take a nap, this may be caused by the combination effect of two low points, in both the circadian and subliminal ultradian rhythm.

First of all, there is a correlation between the rate that a brain is oscillating and the person’s state of consciousness, where cps represents cycles per second. In general, if the brain is oscillating in Beta at a rapid, somewhat desynchronized rate, the person is either wide-awake or in the dream state. This is why REM is also called paradoxical sleep, because when one looks at the EEG, it is hard to tell if that person is wide-awake or dreaming.

Second, the ninety-minute REM cycle is actually one form of dreaming, the more bizarre form, whereas in the NREM state, a person may also be dreaming, but these dreams are much more realistic and resemble normal conscious thinking. They are not elaborate fantastical trips like REM dreams. This suggests that REM dreams are most likely under right-brain control, whereas NREM is more under left-brain control. In a sense, once the person drops into Delta, that is, becomes unconscious, a switch takes place. During the day, the left brain, which houses language, dominates. We think in words and therefore structure our world in words. The right brain, which processes pictures, is more in the background during the day. And at night a reversal takes place. The “active” left brain becomes “inactive” or “asleep,” and the subordinate right brain, which had been “inactive” becomes “active” or “awake.” This model, of course, oversimplifies the situation because the right brain is quite active during the day and the left brain is active at night, but in terms of dominance, the left dominates during the day and the right dominates at night.
Marc Seifer

“Recasting psychology as a vehicle not for mental health but for higher consciousness, he shows that by casting off the mechanical mental operation of day-to-day life, we naturally attain the self-integration to which traditional psychology has long aspired. By entering the true path to fulfillment of the soul’s will, we help the planet by transforming ourselves and raising our energy to a higher realm.”