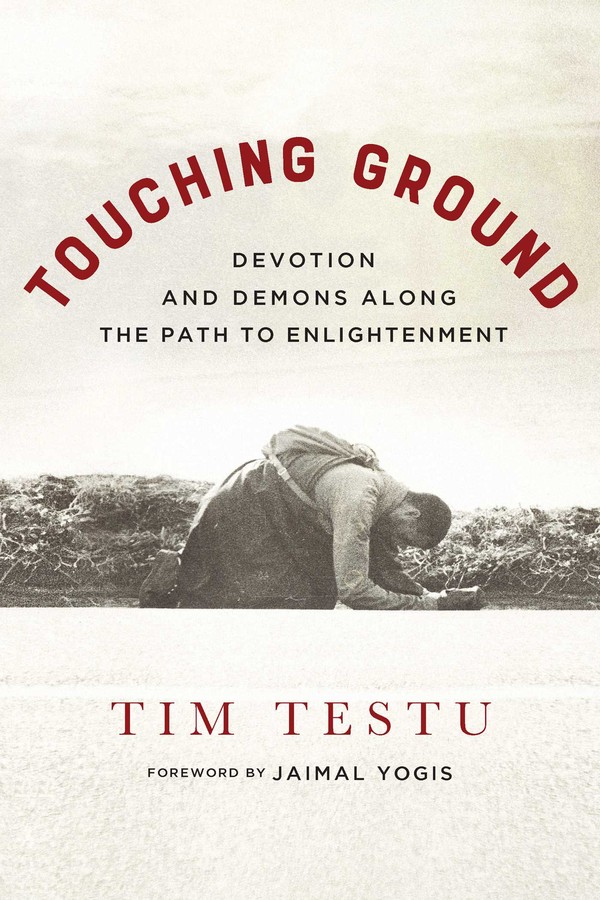 The vivid story of a hippie, a carpenter, a Vietnam vet, an alcoholic, a marine engineer, and a great dad who battled his demons on the Buddhist path.

From October 16, 1973, to August 17, 1974, Tim Testu walked all the way from San Francisco to Seattle, bowing his head to the ground every three steps. And that’s not even the best part of his story.

Tim Testu was one of the very first Americans to take ordination in Chinese Zen Buddhism. His path—from getting kicked out of school to joyriding in stolen boats in the Navy to squatting in an anarchist commune to wholehearted spiritual engagement in a strict Buddhist monastery—is equal parts rollicking adventure and profound spiritual memoir.

Touching Ground is simultaneously larger than life and entirely relatable; even as Tim finds his spiritual home with his teacher, the legendary Chan master Hsuan Hua, he nonetheless continues to struggle to overcome his addictions and his very human shortcomings.

Tim never did anything halfway, including both drinking and striving for liberation. He died of leukemia in 1998 after packing ten lifetimes into fifty-two years.

“A wonderful addition to a cherished genre: the spiritual memoir of the all-too-human, struggling practitioner, heroically seeking a way to transcend their flaws and challenges, to achieve a moment of blessed liberation. This is the story of one individual’s journey to overcome his doubts and confusion, to attain the exalted in a magnificent gesture. We’re lucky that before Testu succumbed to leukemia in 1998 he managed his second great triumph, to recount his experiences in this fascinating memoir, and that his daughter Jeanette took the time to bring his words to our attention. I suspect you’ll enjoy it as much as I did.”

"In reading Touching Ground—a compelling account of the author’s life and religious journey—I am reminded of the wave of young Americans of his generation who also sought refuge in Buddhism. Few, perhaps, were as dedicated or courageous as the author, or willing to suffer the hardships of devoted ascetic practice, but many will find mirrored in Testu’s inspired story something of their own spiritual history and humanity."

– Mike O'Connor, translator of When I Find You Again, It Will Be in Mountains

"There's nothing fancy, or easy, about walking a spiritual path, and this is as real and as useful an account as you might ever read."

"A gem of a tale about a deeply flawed and serious seeker of the meaning of life, and how he found meaning and a home with a Chinese Chan master during the turbulent 1960s and 1970s. Tim Testu is so honest about everything he encounters with his wise and wild master and with the darkest parts of himself that I found myself alternately entertained, amused, grateful, and touched by his journey to find himself and the Dharma."

This autobiography of an American Buddhist monk who walked from San Francisco to Seattle, prostrating every three paces, was found by his daughter after his death, lost, and then—thankfully—found again. It is a moving testament to the fact that Buddhism has always been the practice of imperfect ordinary people who, at times, do remarkable things. The story is at times funny, at times poignant, and always compelling.

– Richard Bryan McDaniel, author of Cypress Trees in the Garden: The Second Generation of Zen Teaching in America