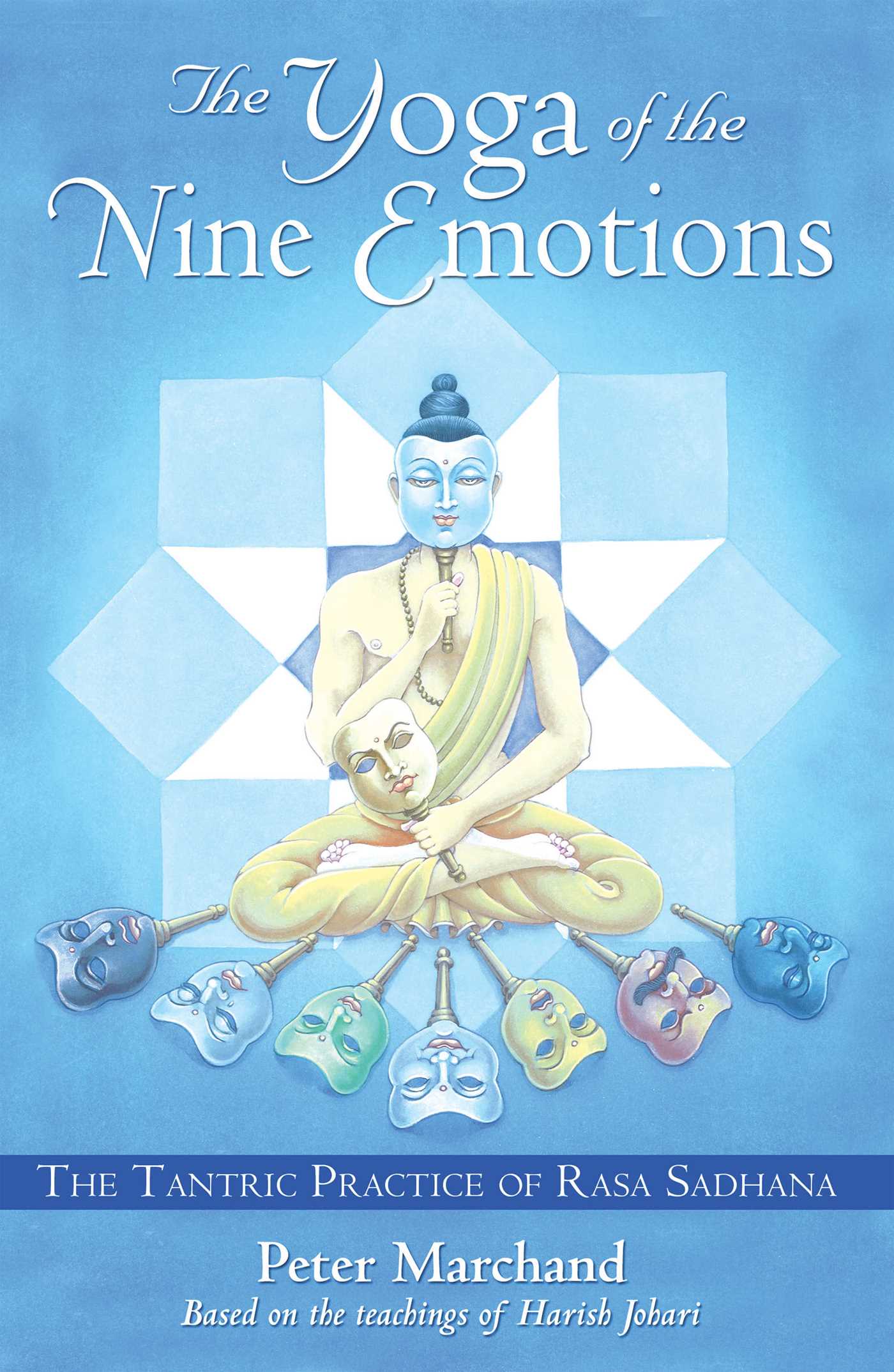 The Yoga of the Nine Emotions

The Tantric Practice of Rasa Sadhana

• Details the 9 Rasas that represent our basic emotions

• Shows how Rasa Sadhana can be integrated with other yoga practices

• Based on the teachings of Harish Johari

Rasas are the essence of our emotions that exist in both the body and the mind. The Tantric tradition recognizes 9 Rasas that represent our basic emotions: love, humor, wonder, courage, calmness, anger, sadness, fear, and disgust. Those who practice Rasa Sadhana learn to overcome negative emotions in order to pursue better health, enhanced spiritual growth, and enduring happiness.

Our emotions are continuously affected by the interplay of our senses, the elements, food, and the life force in our body. In The Yoga of the Nine Emotions, Peter Marchand offers many practical physiological and philosophical tools from Tantric and Ayurvedic traditions that can help readers change their emotional patterns. He explains the nature and purpose of each Rasa and how we can strengthen or weaken one Rasa through another. He also offers Ayurvedic cooking guidelines and daily routines for balancing sensory input and strengthening emotional health, including fasting from negative emotions as well as how to energize positive ones. As we master our emotions through the practice of Rasa Sadhana, we gain true control of our lives and our relationships with others.

When expectations are not fulfilled, the ego may feel that it has been neglected or treated incorrectly; this forms the basis for Anger. In Anger, the ego becomes extremely dominant. The mind follows the ego, though its attention may wander. The intellect may try to give soothing advice, but if overruled by the ego it will supply information that supports the Anger, such as the memory of earlier unfulfilled expectations.

Anger is also based in the suppression of feelings. Some people harbor Anger over one particular subject all of their lives. The repetition of angry thoughts can work like a mantra that over time comes to dominate one’s entire being. Similarly societies may keep Anger over generations, such as in the wars that have existed between some countries over the centuries.

Anger in the Body
In Anger, the eyes are opened wide, while in Calmness the eyes are closed. Eyes can express more Anger than words. Anger can cause the jaws, the hands, or the whole body to become tight and tense. The entire body becomes hot, particularly the hands. The breathing pattern becomes fast and shallow and the sounds become harsh and loud.

The element of the Anger Rasa is fire. Pitta dominated people are easier to anger than others. Anger can be a purifier that cleans negative emotional patterns. The burning yogic fire that comes out of the third eye of Shiva is also caused by Anger. However, Anger is only beneficial for a very short time, when it burns the toxins created by dissatisfaction and irritation.

If Anger persists for some time, its fire starts eating the system from within, creating mental and bodily diseases. The fire of Anger disturbs pitta and makes the body chemistry become more acidic. This causes problems in joints and muscles, destroys the eyesight, causes cardiovascular disturbances such as heart attacks, and brings illness to the digestive and nervous systems.

Mastering Anger
By itself, Anger will not stay for a very long time because of the natural changes in body chemistry. So if we do not feed Anger with our thoughts, it will go all by itself.

The best way is to dissolve the Anger the moment it arises, by analyzing the unfulfilled expectation that lies at the basis of it, then shifting to one or more of its enemy Rasas--Joy, Love, or Wonder--if needed, followed by some purification of body chemistry. The second best option is to address the circumstances of the Anger in a non-violent way, if we feel that it is our duty or dharma to counter an injustice. The third best option is to play a role of being angry toward the person who is misbehaving, so that he or she gains a natural understanding that an important line has been crossed. Suppressing Anger is never an option, because it will continue to simmer inside.

While changing our mental attitude, we may also remove the biochemical basis for Anger. This consists of consciously cooling down the fire of Anger:
--Slowly drinking several glasses of cool water (not icy cold) is a sure way to make Anger go. Soft drinks, with a lot of sugar, acids, and often caffeine will not do. They will only increase the excitement.
--Drinking water that has been stored in a silver cup, accumulating lunar energy for a day and night or more, is the very best. As an alternative, non-glazed clay cups may also be used.
--Not taking any sweet or fat and especially fasting for some time is a sure way to deny combustibles to the fire of Anger. Since the feeling of hunger may increase irritability, any food fasting should be combined with exercising Calmness.
--Avoid pungent, salty, sour, and astringent tastes in general
--Avoid alcohol, because it is the best combustible available, heating and drying the body.
--Chewing red or green cardamom will turn the acid biochemistry to alkaline and thus reduce Anger.
--Yogurt and lemons are very good also. Lemons are sour but are cooling, unlike most other sour foods.

Practicing Anger Sadhana for some time will give one the power to control this Rasa at any occasion. Even if the need to express Anger in communication rises, it will be expressed without being felt.

Doing a sadhana of Anger means to promise oneself not to be angry in thought, word, or deed for a particular period. Not being angry in thought will require a lot of effort to keep the body chemistry balanced and cool. It will also require practicing Calmness in regular meditation. If an angry thought comes along, one should accept it and deny it at the same time. Accepting it means that it should not become a reason for Anger, whether directed at ourselves or at the original cause. To deny it means to put it out of our mind, either by analyzing the unfulfilled expectation that lies at the basis of it or by purification of the mind, such as through mantra chanting (japa). The Anger should never be suppressed, only dissolved by truth, forgiveness, and purification. As long as angry thoughts keep festering inside, the sadhana of Anger is not done.

Raudra Sadhana can be a kind of yoga adopted for a lifetime. Whoever can give up on Anger for the rest of his or her life will gain more than control over the Anger Rasa. The siddhi or power obtained by Raudra Sadhana is bhukti, the power of enjoyment. Bhukti means that we get what is ours to enjoy without effort.
Peter Marchand

Peter Marchand is one of the founders of Sanatan Society, a networking organization of the family and students of Harish Johari (1934-1999), a tantric scholar, poet, and artist who authored 12 books, including Chakras and Tools for Tantra. Marchand became a student of Johari in 1983 and teaches Rasa Sadhana and Jnana Yoga in Europe, India, the United States, and Canada. The author of The Yoga of Truth and The Yoga of the Nine Emotions, he lives in Belgium.

"This guide to mastering your emotions through traditional yogic, Tantric, and Ayurvedic practices is definitely the most fascinating book that I've read in a long while. . . . provides both the information and inspiration to utilize our emotions to promote better health, spiritual growth, and enduring happiness."

"The book is honest, straight-forward, and designed to help the reader. For those interested in the practice of Rasa Sadhana, this is the book for them. Peter Marchand is to be congratulated on a fine, clearly written book, one that will be of immense help to many people."

"I seriously recommend this book, for the explanation of the nine rasas alone; although the rest of the book is fantastic as well! I feel I've been introduced to my emotions . . ."

The Yoga of the Nine Emotions

The Tantric Practice of Rasa Sadhana