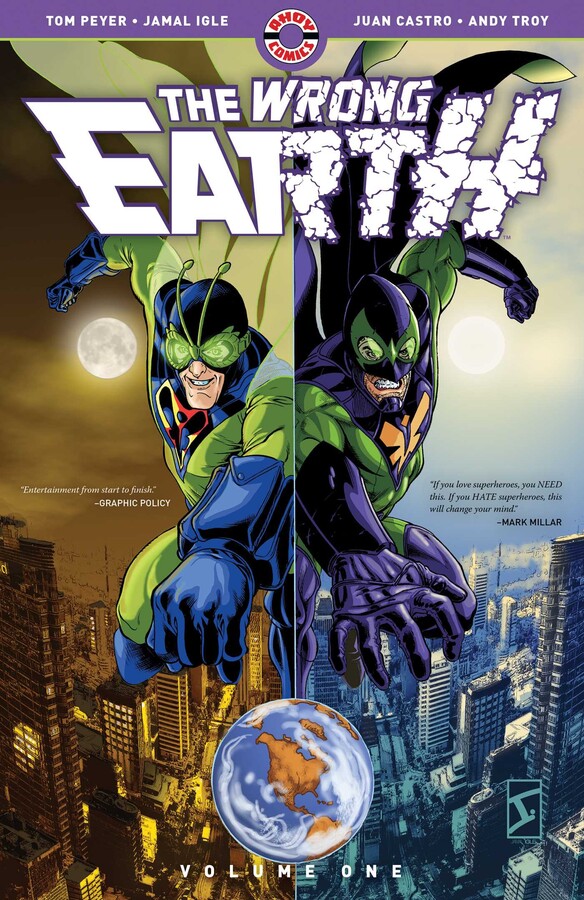 Collecting the smash-hit miniseries that launched AHOY Comics! On dark, gritty Earth-Omega, masked vigilante Dragonfly punishes evil maniacs and evades corrupt authorities. On sun-splashed Earth-Alpha, costumed crook-catcher Dragonflyman upholds the letter of the law. Now they're trapped on each other's worlds, where even the good guys don't share their values! This volume also collects all the original Stinger and Dragonflyman backup stories, plus extra behind-the-scenes features.

This slope-shouldered industry veteran was a long-running writer on DC's Legion of Super-Heroes, a founding editor at their Vertigo imprint, and the proud writer of their worst-selling, award-losing series Hourman.

He has since written enough major characters to fill one of those hyper-populated super-hero posters where you don't know who to look at first.

Today he happily writes and edits AHOY Comics from his Ditkoesque office in Downtown Syracuse, NY.

A recipient of the 2011 Inkpot Award for outstanding achievement in Comic Art, industry veteran Jamal Igle is the writer/artist/creator of Molly Danger for Action Lab Entertainment; the co-creator of Venture with writer Jay Faerber; the artist of the series Black from Black Mask Studios; and the penciler of AHOY Comics' THE WRONG EARTH.

Jamal's detailed pencils have graced books as varied as The Narrative of the Life of Frederick Douglass, the all-ages action miniseries Race Against Time, and mainstream hits such as G.I.Joe, Iron Man, Spider- Man and Green Lantern. Jamal has penciled popular runs on Firestorm the Nuclear Man, Nightwing, Tangent: Superman's Reign, Superman, Supergirl, and Zatanna for DC Comics; Noble Causes for Image Comics; New Warriors for Marvel Comics; and The Wrong Earth for AHOY.

He's acted on the small screen, done voiceovers for commercials, packaged books for Scholastic, and drawn storyboards for Roughnecks: Starship Trooper Chronicles and Max Steel: MX1 for Sony Animation. Jamal is also a popular guest lecturer on the subjects of comics and animation.

Juan Castro, an inker and illustrator from Tijuana, Mexico, has been in the comics industry for over 10 years. He has worked on such titles as Transformers, GI Joe, Halo: Escalation, Arrow, Aquaman, Grayson, Batgirl, Sensation Comics Featuring Wonder Woman, and many more. He has been nominated for three Inkwell Awards.

Frank is the former award-winning political cartoonist for The Post-Standard newspaper in Syracuse, NY. His cartoons have been reprinted in The New York Times, The Washington Post, USA Today and Newsweek.

He has written fiction and satire with his good friend Hart Seely. Their work has appeared in The New Yorker, The New York Times, The Village Voice, Slate, and on National Public Radio. He’s the co-author of 2007-Eleven and Other American Comedies.

Gary Erskine has worked in the comic industry for near thirty years for MARVEL, DC Comics, Vertigo, Dark Horse Comics, IMAGE, IDW and other companies with writers Mark Millar, Warren Ellis, Garth Ennis, James Robinson and Grant Morrison on books including The Unwritten, Hellblazer, War Stories, The Massive with Brian Wood, and Grindhouse with Alex De Campi, with characters as diverse as Judge Dredd, Starman, John Constantine, Dan Dare and Captain America. He has also contributed to licenses including Star Wars, Star Trek, Doctor Who, Transformers and Terminator. He mentors film students on storyboarding, teaches workshops at schools and libraries and is currently writing and publishing Roller Grrrls. Future work includes Incendiary.US and Zachariah Gunn: Dakota.

Gary has also provided storyboards and concept design work for the games and film industry and also works commercially with clients including D'Agostini, SONY, EA Games COLORS, Team GB British Cycling, J League and the Joshua Agency. He has also contributed a short story, The Final Piece of Me, to the successful Metal Made Flesh series for Subversive Comics  with writer Cy Dethan. Recent work includes the companion graphic novel to the Frontlines series of sci-fi novels by Marko Kloos, written by Ivan Brandon for Jet City Comics with colour by regular collaborator Yel Zamor.

Gary also hosts character design workshops for schools and teaches storyboards for the Royal Conservatoire of Scotland and more recently provided workshops for the Prince's Trust.

Gary lives near St. Andrews with his wife Mhairi and cats, Meg and Mog.

A surprisingly deep exploration and commentary on where this medium has been, how it got where it is, and where it can go.

Peyer's writing embraces classic superhero storytelling really beautifully while also parodying it and it makes for a hell of a comic book reading experience. Jamal Igle, the artist for the series, flawlessly compliments Peyer's vintage styled writing with his gorgeous artwork that is both extraordinary and classic.