One morning in the autumn of 1793, watchman Mikel Cardell is awakened from his drunken slumber with reports of a body seen floating in the Larder, once a pristine lake on Stockholm’s Southern Isle, now a rancid bog. Efforts to identify the bizarrely mutilated corpse are entrusted to incorruptible lawyer Cecil Winge, who enlists Cardell’s help to solve the case. But time is short: Winge’s health is failing, the monarchy is in shambles, and whispered conspiracies and paranoia abound.

Winge and Cardell become immersed in a brutal world of guttersnipes and thieves, mercenaries and madams. From a farmer’s son who is lead down a treacherous path when he seeks his fortune in the capital to an orphan girl consigned to the workhouse by a pitiless parish priest, their investigation peels back layer upon layer of the city’s labyrinthine society. The rich and the poor, the pious and the fallen, the living and the dead—all collide and interconnect with the body pulled from the lake.

Breathtakingly bold and intricately constructed, The Wolf and the Watchman brings to life the crowded streets, gilded palaces, and dark corners of late-eighteenth-century Stockholm, offering a startling vision of the crimes we commit in the name of justice, and the sacrifices we make in order to survive.

By clicking 'Sign me up' I acknowledge that I have read and agree to the privacy policy and terms of use. Free ebook offer available to NEW US subscribers only. Offer redeemable at Simon & Schuster's ebook fulfillment partner. Must redeem within 90 days. See full terms and conditions and this month's choices.
This reading group guide for The Wolf and the Watchman includes an introduction, discussion questions, and ideas for enhancing your book club. The suggested questions are intended to help your reading group find new and interesting angles and topics for your discussion. We hope that these ideas will enrich your conversation and increase your enjoyment of the book.

1. The epigraph of The Wolf and the Watchman was written in 1793, the same year that the book takes place, and reads, “Guile begets guile, violence begets violence.” What is your interpretation of this quote and how does it set the mood for the story that follows?

2. The book’s events take place at the dawn of the Romantic Age, a period known for its emphasis on emotions, originality, and individuality in art, seen by many historians as a response to the rationalism of the Age of Enlightenment that proceeded it. How does Natt och Dag’s portrait of Stockholm in 1793 support or conflict with these common characterizations of this era? Are the seeds of romanticism evident in The Wolf and the Watchman?

3. In 1789, four years prior to the book’s events, the storming of the Bastille marked the beginning of the end of the French monarchy. In 1792, a year before the events of the book take place, the King of Sweden—Gustav III—was assassinated. How is the political tumult throughout Europe reflected in the system of justice Winge must navigate in his investigation? Does the instability abroad make itself felt in Stockholm? If so, how?

4. How do Cecil Winge and Mikel Cardell display their very different personalities? What unites them in their search for the unknown man’s killer? Do you think they have different motivations for finding the killer?

5. We discover that Winge has estranged himself from his wife. But is this because of his illness or her infidelity? Are the two connected? Do you think he is correct to push her away so that she doesn’t have to see him die? Do you think this action is selfish or selfless?

6. Following a clue, Winge speaks with a cloth merchant who brings up the ancient Roman playwright Plautus’s phrase, homo homini lupus est, which in one translation reads, “Like a wolf is man to other men.” The wolf was the symbol of the Roman Empire. Wolves are pack animals, admired for their loyalty and power, but also seen as predators and deceivers. How does this idea frame the conversation Winge is having about the nature of humanity?

7. Kristofer Blix is only seventeen yet has already done military service and seen brutality in the Russo-Swedish War. How do you think this experience effects his choices when he arrives in Stockholm?

8. In Part Three we meet Anna Stina, a young woman who is faced with a number of harrowing decisions. To what extent do you think Anna Stina has options, and to what extent is she a hostage to other people’s actions? Do you think it is important to act in a morally correct manner even if the consequences of those actions are personally devastating?

9. Over the course of the book, we encounter several different men who are called “Watchmen,” who have the authority to protect the city’s residents. What can people like Anna Stina do when their would-be protectors turn out to be their oppressors? Do you see any parallels between her situation and the modern-day conversation around police brutality and corruption?

10. At the end of the novel, Winge makes a decision to lie in order to achieve his goal of serving justice. Do you think Winge has undercut the truth and morality he stands for by doing so? Do his means justify the ends, or has he made himself part of the machinery of the corrupt society he detests?10.

2. The “modern” Swedish Smorgasbord originated in the 1700s as an upper-class tradition of a spread of appetizers and drinks before dinner. Visit https://sweden.se/collection/classic-swedish-food/ to find delicious Swedish meals to make for your book club, and enjoy all the cheeses, breads, herring, potatoes, and meatballs that Sweden has to offer.

3. This is a novel full of atmosphere and period detail. What do you think are the most interesting moments in the book, visually, that you would like to see on the big screen? Are there parts that you think might be too gruesome for the screen? What kind of music would you select for the film? 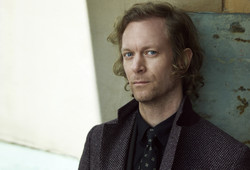 Niklas Natt och Dag (“Night and Day”) is a member of the oldest surviving noble family in Sweden. He enjoys playing the guitar, mandolin, violin, and the Japanese bamboo flute. The Wolf and the Watchman, his first novel, was named the Best Debut of 2017 by the Swedish Academy of Crime Writers and is being published in thirty countries. He lives in Stockholm, Sweden, with his wife and their two sons.

"A tantalizing mystery, a foreboding, claustrophobic sense of place and a pair of unforgettable investigators."

– A.J. Finn, #1 bestselling author of The Woman in the Window

“For Stieg Larsson fans, a new voice...a stunning debut...Like Umberto Eco’s novel [The Name of the Rose, this] is a cerebral, immersive page-turner [with] a moral  heft reminiscent of works by Graham Greene...Plenty of twists to satisfy thrill-starved readers.”

“What's better than an ornate period piece with style to spare? One that includes a murder mystery. Oh, and boy is it a riveting mystery...A bit of Patrick Süskind’s Perfume and a bit of Sherlock Holmes, this wolf has some bite to it.”

“In his debut novel, Natt och Dag examines the effects of a brutal murder on those who investigate it—and explores the psychological causes for the crime...Chilling and thought-provoking. Relentless, well-written, and nearly impossible to put down.”

"Reads like a season of 'True Detective'...anchored by a powerful sense of place and a memorable cast of characters...you won't soon forget it."

“[A] masterly first novel...The book’s structure, which includes flashbacks and multiple perspectives, will remind many of Iain Pear’s An Instance of the Fingerpost, and Natt och Dag uses this structure to heighten suspense and deepen characterization. The Swedish Academy of Crime Writers named this the bets debut novel of 2017, and U.S. readers will be likewise impressed.”

"A standout. The characterization is excellent, as is the evocation of eighteenth-century Stockholm, an uncommon historical setting that provides a vibrant backdrop for this unusual mystery. Natt och Dag's side-plots dovetail neatly, his pacing is skillful, and he explores with aplomb his novel's main theme, Homo homini lupus est —Man is wolf to man.”

"Calls to mind another auspicious debut murder mystery set in an unfamiliar place and time: Umberto Eco’s The Name of the Rose. It’s been nearly 40 years since that foreign-language historical thriller captured the world’s imagination, thoroughly engrossing readers and propelling its author into international stardom. So we’re about due, and Natt och Dag is certainly a worthy candidate.”

“This incredibly disturbing trip into the grotesqueries of history is as well-written as it is well-researched, true to not only the detail of the time period but also true to its mores and atmosphere...infused with a tear-it-all-down mentality, this one is not to be missed.” —Literary Hub, Best books of 2019