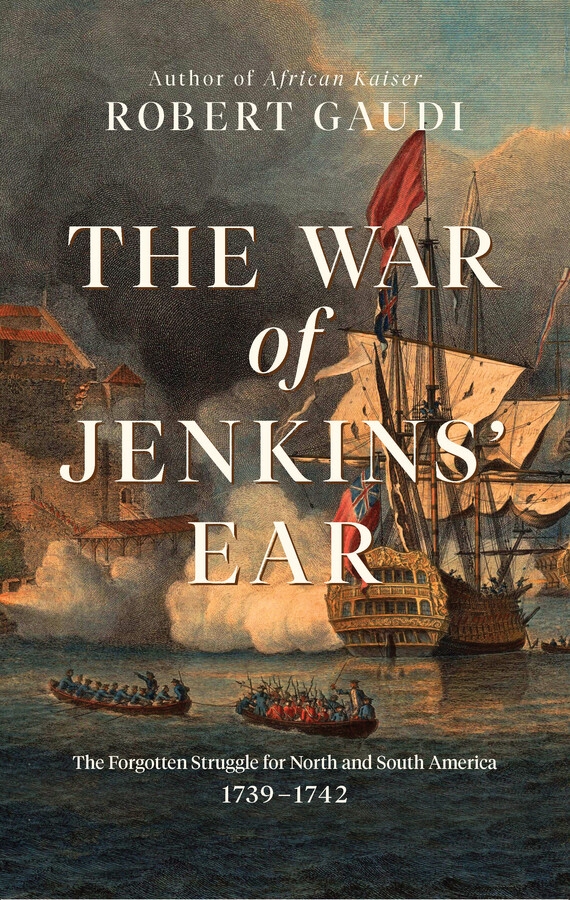 The War of Jenkins' Ear

The Forgotten Struggle for North and South America: 1739-1742

Filled with unforgettable characters and maritime adventure, the incredible story of a forgotten war that shaped the fate of the United States—and the entire Western Hemisphere.

In the early 18th century, the British and Spanish Empires were fighting for economic supremacy in the Americas.  Tensions between the two powers were high, and wars blossomed like violent flowers for nearly a hundred years, from the War of Spanish Succession (sometimes known as Queen Anne's War in the Americas), culminating in the War of Jenkins' Ear.

This war would lay the groundwork for the French and Indian War and, eventually, the War of the American Revolution.  The War of Jenkins' Ear was a world war in the truest sense, engaging the major European powers on battlefields ranging from Europe to the Americas to the Asian subcontinent.

Yet the conflict that would eventually become known as the War of Jenkins' Ear—a moniker coined by the 19th century historian Thomas Carlyle more than a century later—is barely known to us today.  Yet it resulted in the invasion of Georgia and even involved members of George Washington’s own family.  It would cost fifty-thousand lives, millions in treasure, and over six hundred ships.

With vivid prose, Robert Gaudi takes the reader from the brackish waters of the Chesapeake Bay to the rocky shores of Tierra del Fuego.  We travel around the Cape of Good Hope and across the Pacific to the Philippines and the Cantonese coast, with stops in Cartagena, Panama, and beyond.  Yet even though it happened decades before American independence, The War of Jenkins' Ear reveals that this was truly an American war; a hard-fought, costly struggle that determined the fate of the Americas, and in which, for the first time, American armies participated.

In this definitive work of history—the only single comprehensive volume on the subject—The War of Jenkins’ Ear explores the war that established the future of two entire continents.

Robert Gaudi is a writer, historian and journalist. His work has appeared in the Washington Post, the Washington Examiner, Harper's, Landscape Architecture Magazine, and Tri-Quarterly, among other publications. He has variously worked for the National Endowment for the Arts, sold tickets at a movie theater, tended bar and managed a classic car restoration shop. He graduated from the Univeristy of Virginia in Charlottesville and attended the University of Southern California's Graduate Film School and The University of Iowa's Writers Workshop. He lives with his children in Washington D.C.

“Military tactics, financial shenanigans, political infighting, even an expedition into the Pacific — all these are splendidly described and orchestrated by Gaudi. He further salts an already exciting narrative with lurid gossip about the Spanish court, quotations from many secondary sources, and detailed, You-Are-There accounts of land and sea battles. While Gaudi doesn’t hide his contempt for the popinjays and idiots who wasted the lives of good men, he is unstinting in his admiration for heroism and self-sacrifice. In short, The War of Jenkins’ Ear is a superb example of what the French call haute vulgarisation, that is, a serious nonfiction work designed to be read for pleasure. A thrilling ride.”

“Historian Gaudi delivers an action-packed account of a largely forgotten 18th-century conflict between Britain and Spain over trade in the Americas. Gaudi’s extensively researched narrative clarifies the historical context without sacrificing drama and color; early American history buffs will relish this comprehensive treatment of an obscure yet consequential episode.”

“In The War of Jenkins Ear, historian Robert Gaudi gives his readers a fascinating and well-written account of this war, its causes, its battles, and its profound consequences for the Americas. With his storytelling gifts, his skills as a writer, and his knowledge, Gaudi, who is also the author of the highly acclaimed “African Kaiser,” has brought us an excellent account of a long-forgotten war.”

“Excellent storytelling, good writing, insight into human nature, wit, and a sense of the absurd: Gaudi’s The War of Jenkins’ Ear is history at its finest.”

“Gaudi tells the story of the war and its principal antagonists with verve, erudition, and page-turning detail… The best writers of history tell a compelling narrative of events and place those events into a broader historical context. That is what Robert Gaudi has done with The War of Jenkins’ Ear, a little remembered conflict between Great Britain and Spain that was part of a centuries-long struggle between Europe’s great powers for control of the Western Hemisphere.”

"Mr. Gaudi devotes his most thoughtful chapters to the conflict’s sideshows. There is fascinating coverage of Gen. James Edward Oglethorpe, philanthropist founder of Georgia, who failed in 1740 to capture St. Augustine, in neighboring Spanish Florida, but two years later repulsed a counterattack upon his colony at the Battle of Bloody Marsh. Laced with sardonic humor."

The War of Jenkins' Ear

The Forgotten Struggle for North and South America: 1739-1742