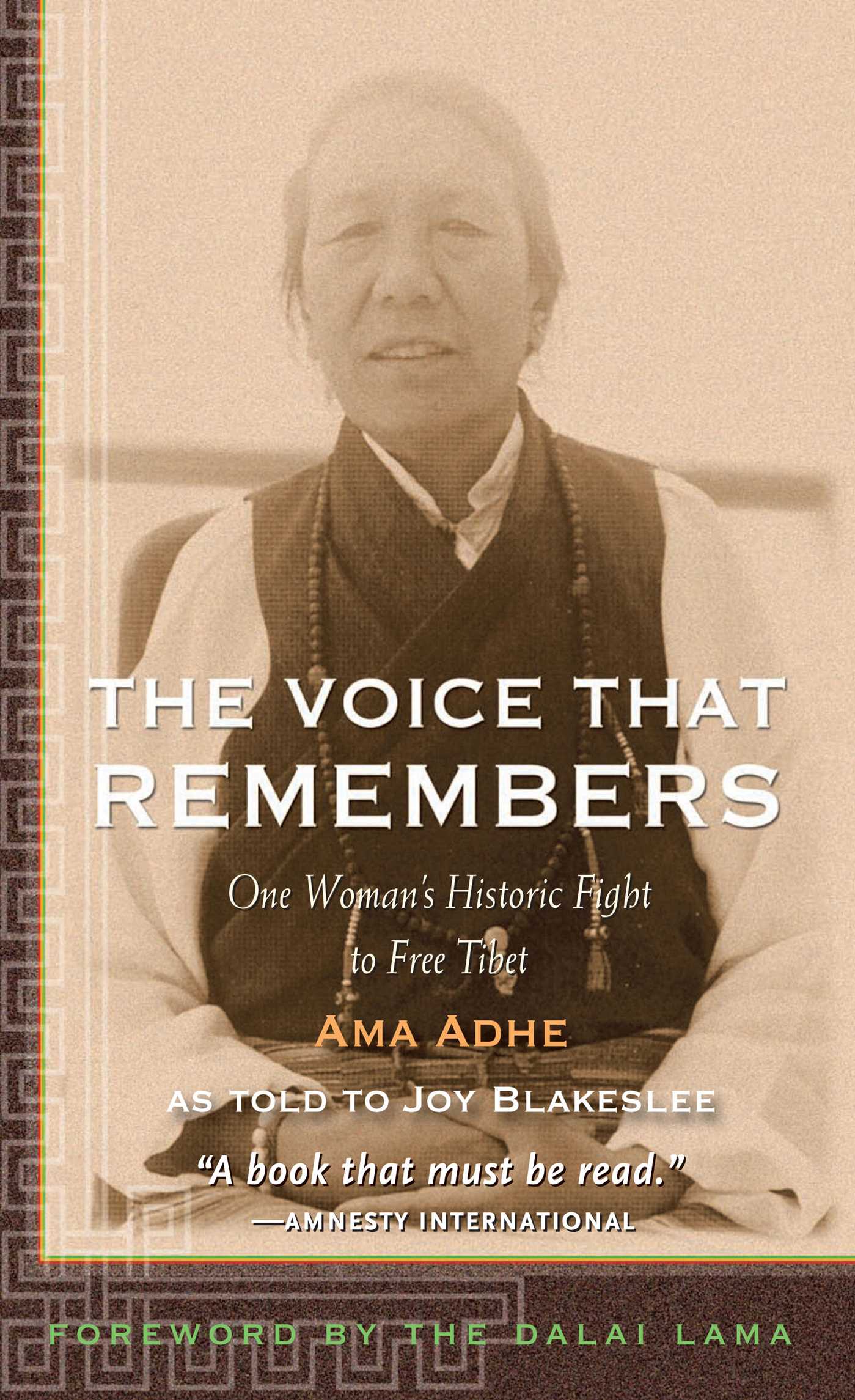 When Adhe Tapontsang--or Ama (Mother) Adhe, as she is affectionately known--left Tibet in 1987, she was allowed to do so on the condition that she remain silent about her twenty-seven years in Chinese prisons. Yet she made a promise to herself and to the many that did not survive: she would not let the truth about China's occupation go unheard or unchallenged.

The Voice That Remembers is an engrossing firsthand account of Ama Adhe's mission and a record of a crucial time in modern Tibetan history. It will forever change how you think about Tibet, about China, and about our shared capacity for survival.

Ama Adhe Tapontsang is a native of the Kham region of eastern Tibet, where she spent a happy childhood, and is an activist dedicated to securing the much-needed freedom of her country. Imprisoned for twenty-seven years for her resistance activities following the invasion of her country by the Chinese Communists in the 1950s, she faced inhuman torture and deprivation. Following her release, she left in 1987 for India, where she now lives in Dharamsala. The Voice That Remembers is the story of her life.

Joy Blakeslee, M.A. Ed, J.D., is a writer and teacher who specializes in human rights, history, and literacy. Blakeslee has worked in civil rights law, as a teacher for the New York Department of Education, and as an independent researcher. She has visited India many times, and is profoundly impressed by the strength, determination, and spirituality of the Tibetan people. She is currently co-writing a book with Dr. Gloria Frelix about post-Civil Rights era Mississippi, and corporate, environmental racism. Blakeslee lives in Florida.

"With so much of Tibetan history recently lost, this book's achievement is to capture the details of Tibet's agony in a remote corner of our land. I was also born in that remote corner, and Ama Adhe brings to life the spirit there that China tried to wipe out."

"A riveting account of the desecration of a culture, a religion, a family and a landscape."

"A moving testimony which serves to further international awareness and understanding. This book must be read."

"Ama Adhe's moving account of the Chinese invasion of Tibet and her 27-year imprisonment is both deeply disturbing and inspiring. In striking contrast to her horrific experiences as a prisoner, the tone of her narrative is calm and matter-of-fact. As the title suggests, this book is not only about Adhe but also about remembering those who did not survive... Her story is also the story of Tibet as a country and the desperate struggle to save its culture and religion from destruction."

– Manoa: Song of the Snow Lion

"Highly recommended reading... the 'stories of imprisonment,' apart from their important function of exposing the cruelties the Chinese inflicted (and are still inflicting) on the Tibetan populace, can also provide us with a source of tremendous inspiration: the strength of the human spirit demonstrated by Ama Adhe in her account is truly admirable and can act as a model of determination and courage for others."

"The story of a woman who sustained her human dignity, integrity, and compassion in the face of immense degradation and suffering... both compelling and inspiring."

"I have never read a book as terrifying and inspiring in my life. A Tibetan woman's account of twenty-seven years of torture in labor camps for resisting China's occupation of her homeland. Ama Adhe describes--with unutterable calm--acts of unthinkable evil, and the unwavering spirit of the woman who withstood them."

"A captivating story and testimony to the powers of the human will."

"Adhe's early autobiographical accounts of being raised in the Tibetan culture are most rare and precious, but history forces her account to turn to documentation of the first wave of Communist troops in 1950. Though not graphic in its detail, the sheer weight of her list of atrocities is deeply moving. Ama Adhe has provided a sound foundation for the building of truth."