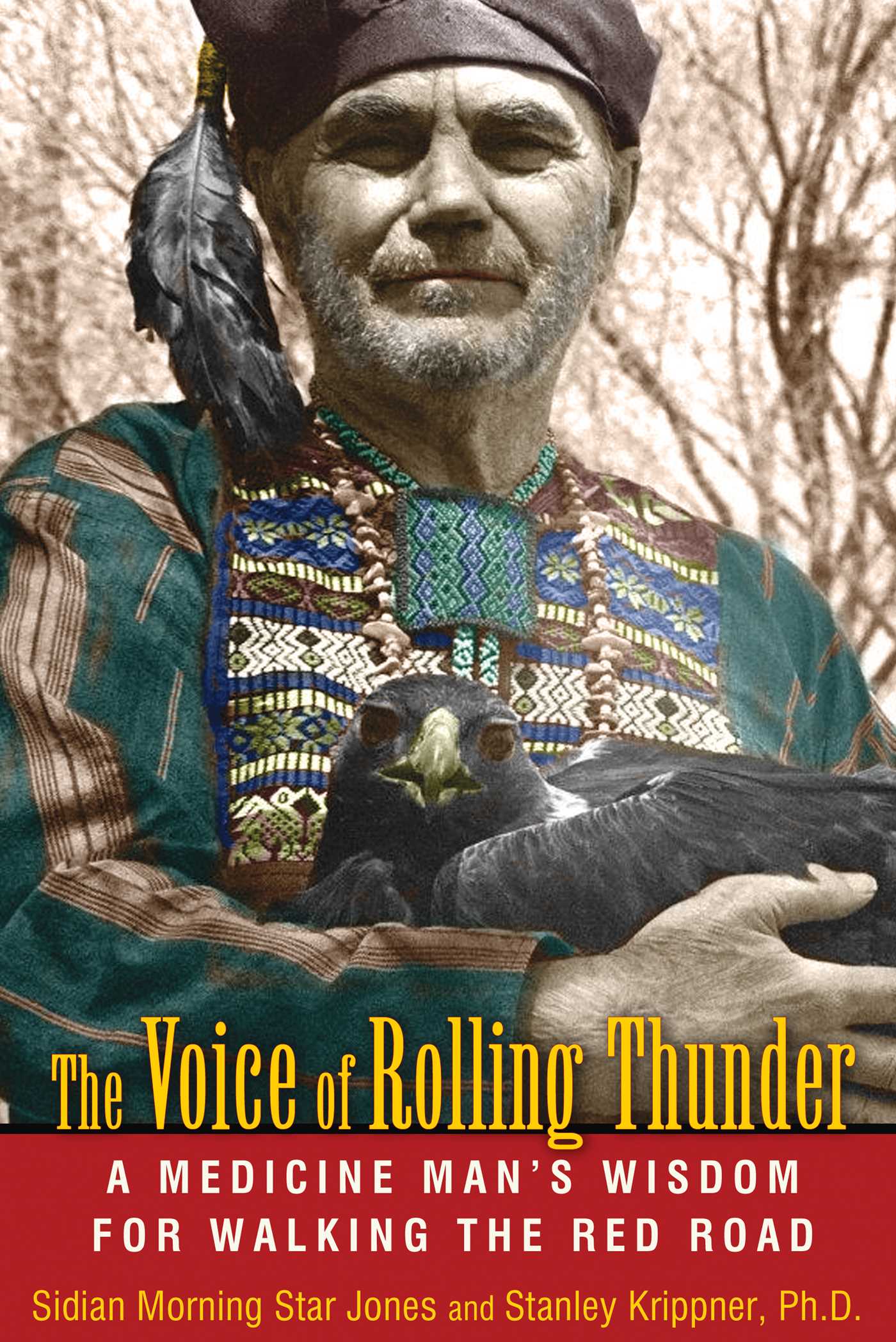 The Voice of Rolling Thunder

A Medicine Man's Wisdom for Walking the Red Road

Intertribal medicine man Rolling Thunder (1916-1997) was a healer, teacher, visionary, and activist who rose to popularity in the 1960s and ’70s through his friendship with artists such as Bob Dylan and as the inspiration for the Billy Jack films. Eyewitness accounts of his remarkable healings are legion, as are those of his ability to call forth the forces of nature, typically in the form of thunder clouds.

Yet it was his equally uncommon gift as a prophet and living representative of Native American wisdom that truly set him apart from other spiritual teachers of that era. Thirty years before most people had ever heard of global warming, Rolling Thunder described in graphic detail the signs of encroaching planetary doom and campaigned for environmental harmony. The key to healing nature’s afflictions, he maintained, is to first restore balance and unity in ourselves.

Containing never-before-released talks preserved by the Grateful Dead’s Mickey Hart, this book shares the teachings of Rolling Thunder in his own words and through inspiring interviews with psychologist Alberto Villoldo and other famous personalities who knew him. Collected and edited by his grandson Sidian Morning Star Jones and longtime friend Stanley Krippner, this book allows you to incorporate Rolling Thunder’s wisdom into your own life.

Stephan A. Schwartz, a well-known writer and researcher, sent Stanley Krippner a detailed, eye-witness account of a healing session that Rolling Thunder had conducted. In Stephan Schwartz’s words:

It is 1968, and we are standing in a parking lot in gathering twilight. There are maybe twenty of us, including half a dozen physicians. Standing there, leaning in, we are watching a Shoshone shaman, Rolling Thunder, attempt to heal the wound of a teenage boy lying on a massage table. It is a painful wound, torn into the muscle of his leg, and the boy is clearly in discomfort and just as obviously medicated. He got this wound through some kind of accident. It is not healing properly, which is what has brought him to this Virginia Beach parking lot at the back of Edgar Cayce’s old hospital, now the headquarters of the Association for Research and Enlightenment (A.R.E.). This organization was founded in 1931 to preserve Cayce’s readings, discourses given while Cayce lay seemingly asleep but actually in a state of non-local awareness, in which time and space took on different meanings. It seems fitting to be standing here, a generation later, watching for signs of another non-local phenomenon, namely, therapeutic intent expressed as physical healing.

A small log fire that I had built earlier at Rolling Thunder’s request flickers on the ground, just below the boy’s head. I am here as a journalist. This ceremony is taking place as a part of my interview with Rolling Thunder.

Hugh Lynn Cayce, the A.R.E.’s executive director, comes over and introduces me to two of the doctors, then goes over to the vans parked nearby and talks with two women. They are the mothers who have accompanied their sons. Inside each van, one of the boys to be healed lies quietly in the back. It is twilight now, and I can see them framed in the overhead light in the vans. One of the physicians, almost in silhouette, moves between them.

Precisely at 7:00 p.m., Rolling Thunder, looking exactly as he had the prior day, walks out of the woods holding his small medicine bag. He goes up to Hugh Lynn, who, seeing him coming, calls everyone together. Hugh Lynn says a few words of introduction, during which time Rolling Thunder kneels down and pulls the breast and extended wing of a crow or raven out of the bag. The pinion feathers are spread. Seeing me, he thanks me for the fire and takes two raw steaks from a cooler. Taking one steak, he tears off the plastic wrap and the paper tray and hands it to me. He walks the few feet back to the fire and drops the steak into the gravel and dirt, next to the little fire ring of stones I have made. It is a very strange thing that he has just done.

He gestures to Hugh Lynn, who goes over to one of the vans; the boy within is brought out on a stretcher and placed on the massage table. Rolling Thunder begins a soft, slow chant. I cannot make out the words, just the rhythm of the rising and falling sounds. He begins making slow passes over the boy’s form, using the wing and breast of the raven, moving it just an inch or two above the boy’s body. I can see the feathers spread slightly against the air pressure as his arm sweeps along in long, graceful strokes. Every second or third stroke Rolling Thunder flicks the wing tip down toward the steak on the ground. As it grows darker, the fire becomes more prominent, and the boy and the man drift into shadow.

It goes on monotonously. Everything else is silent. Suddenly I notice that there is a white, mistlike form taking shape around and in front of Rolling Thunder’s body. Sometimes I can see it, sometimes not. But it becomes stronger, steadier, until it is continuously present. It is almost dark now, but the fire gives off enough light to see. Then it takes form, slowly at first, but as if gathering energ y into itself. I can clearly see that the smokelike figure is a wolf. Rolling Thunder moves as rhythmically as a clock. Sweep. Sweep. Flick. Sweep. Sweep. Flick.

After about thirty minutes the form begins to fade, first losing shape, then becoming increasingly insubstantial. Finally it is nothing more than a chimera, there and not there. Then it is gone.

Rolling Thunder straightens up and stops. He makes a kind of gesture, and somehow we are released and come forward. The boy is very peaceful. His mother also has come forward, and she leans over him, kissing his forehead. The wound is completely healed. It looks like your skin does when a scab falls off, leaving smooth, unlined pink skin, shiny in its newness. I am astonished. Clearly, so is everyone else. I go over to Hugh Lynn, who asks me, “What did you see?” I tell him, and when I say the mist took form, he says, “Was it a wolf?”
Sidian Morning Star Jones

Sidian Morning Star Jones, Rolling Thunder’s grandson and one of the caretakers of his spiritual legacy, is a graphic designer and founder of Open Source Religion. He lives in Boise, Idaho.

Stanley Krippner, Ph.D., is a professor of psychology at Saybrook University and past president of the Association for Humanistic Psychology. The recipient of several distinguished awards and author and coauthor of many books, including Demystifying Shamans and Their World, he lives in San Rafael, California.

“Rolling Thunder had deep knowledge of both the animal powers and the seeded earth. This book eloquently demonstrates how Rolling Thunder used this knowledge in his healing magic and possessed an ‘eagle’s eye’ that guided him on his shamanic journeys.”

– Mickey Hart, percussionist and musicologist, best known as one of the drummers of The Grateful Dead

“Rolling Thunder was a medicine man who had extraordinary ‘presence’ in everything he did. This remarkable book will remind its readers of the mysterious role personal power plays in healing.”

“Rolling Thunder, an intertribal medicine man, never claimed to be a shaman himself, but played an important role in reconnecting contemporary healing with shamanic traditions. This wonderful book honors his memory and reveals both his extraordinary talents and his very human strengths and frailties.”

– Jurgen Kremer, Ph.D., President of the Society for the Study of Shamanism, Healing, and Transformati

“This book is an accessible, authoritative and interesting treatise on Native American healing. I found it thoroughly enjoyable, valuable, and provocative.”

“Rolling Thunder was a catalyst for serious pioneering scholarship in the shamanic healing arts.”

– Oscar Miro-Quesada, founder of Heart of the Healer

“In many ways, Rolling Thunder was the most traditional of all the medicine people I have known.”

“Containing never-before-released talks preserved by the Grateful Dead’s Mickey Hart, this book shares the teachings of Rolling Thunder in his own words and through inspiring interviews with psychologist Alberto Villoldo and other famous personalities who knew him. Collected and edited by his grandson Sidian Morning Star Jones and longtime friend Stanley Krippner, this book allows you to incorporate Rolling Thunder’s wisdom into your own life.”

“Referring to the earth as a living being, Rolling Thunder taught – far in advance of recent discussions of global warming – that ‘the sickness of the natural environment is a reflection of the sickness of human beings.’ According to the authors, this book is both ‘a glimpse of this controversial man who some thought to have authentic shamanic powers and others thought to be a charlatan’ and the story of an exciting era in American History.”

“The Voice of Rolling Thunder is a pick for new age, spirituality and Native American holdings alike and provides a fine guide from an intertribal medicine man who was a healer, teacher and activist and who befriended such artists as Bob Dylan. His unique brand of Native American prophecy and wisdom set him apart from other spiritual teachers of his times, and this offers never-before-released talks preserved by Mickey Hart sharing the teachings of Rolling Thunder in his own words and through interviews. His grandson Sidian Morning Star Jones collects and edits these unique words, highly recommended for any Native American or new age holding.”

“In conclusion, there is always more that can be learned about shamanism in general and the life of Rolling Thunder in particular. In that regard, I highly recommend The Voice of Rolling Thunder to those seeking to further the inquiry and understanding of the difficult path associated with the acquisition of such knowledge.”

“I found The Voice of Rolling Thunder to be a rich reading experience and highly recommend it to all who seek to know more about Rolling Thunder and the many forces and influences surrounding him and other Native Americans.”

The Voice of Rolling Thunder

A Medicine Man's Wisdom for Walking the Red Road