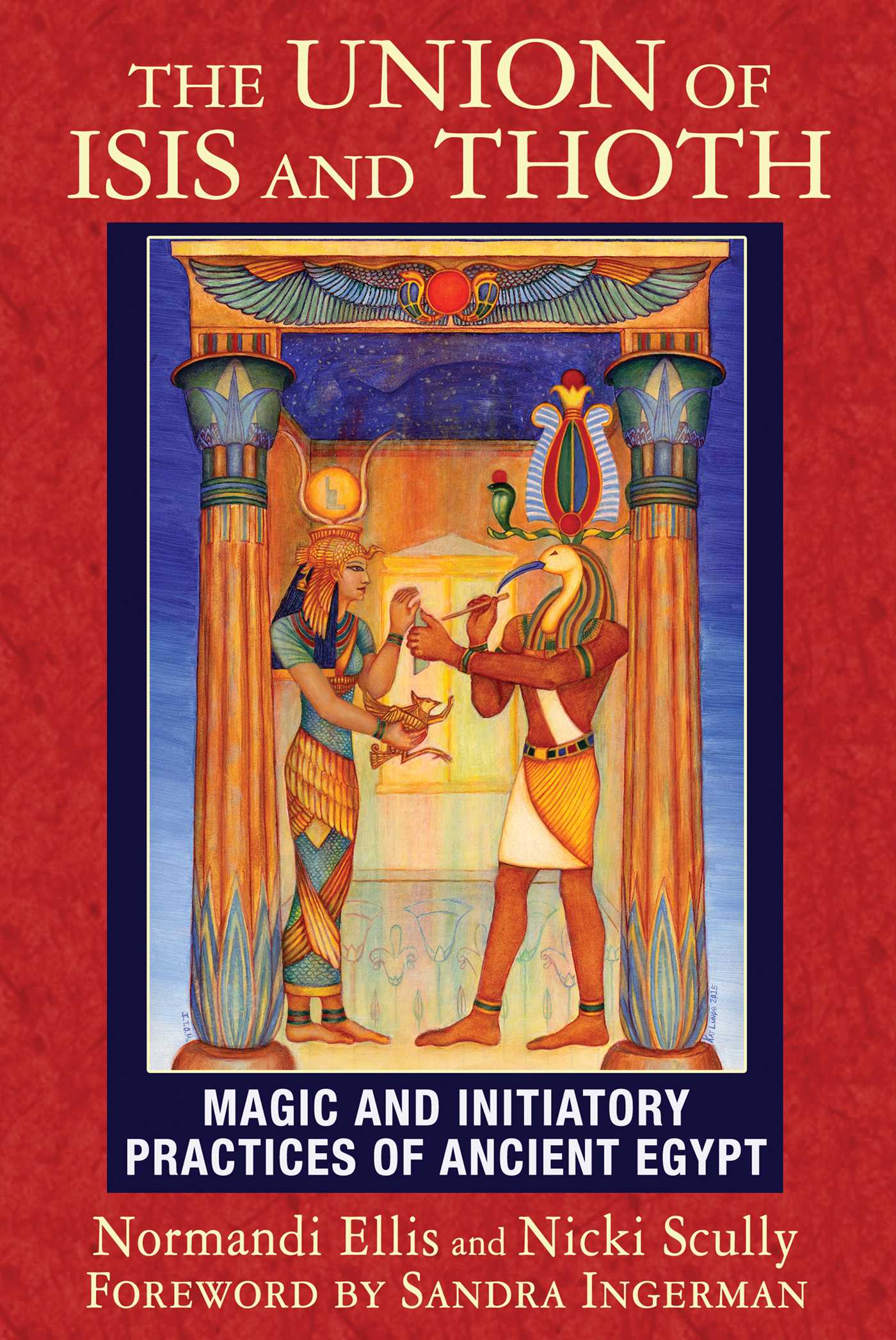 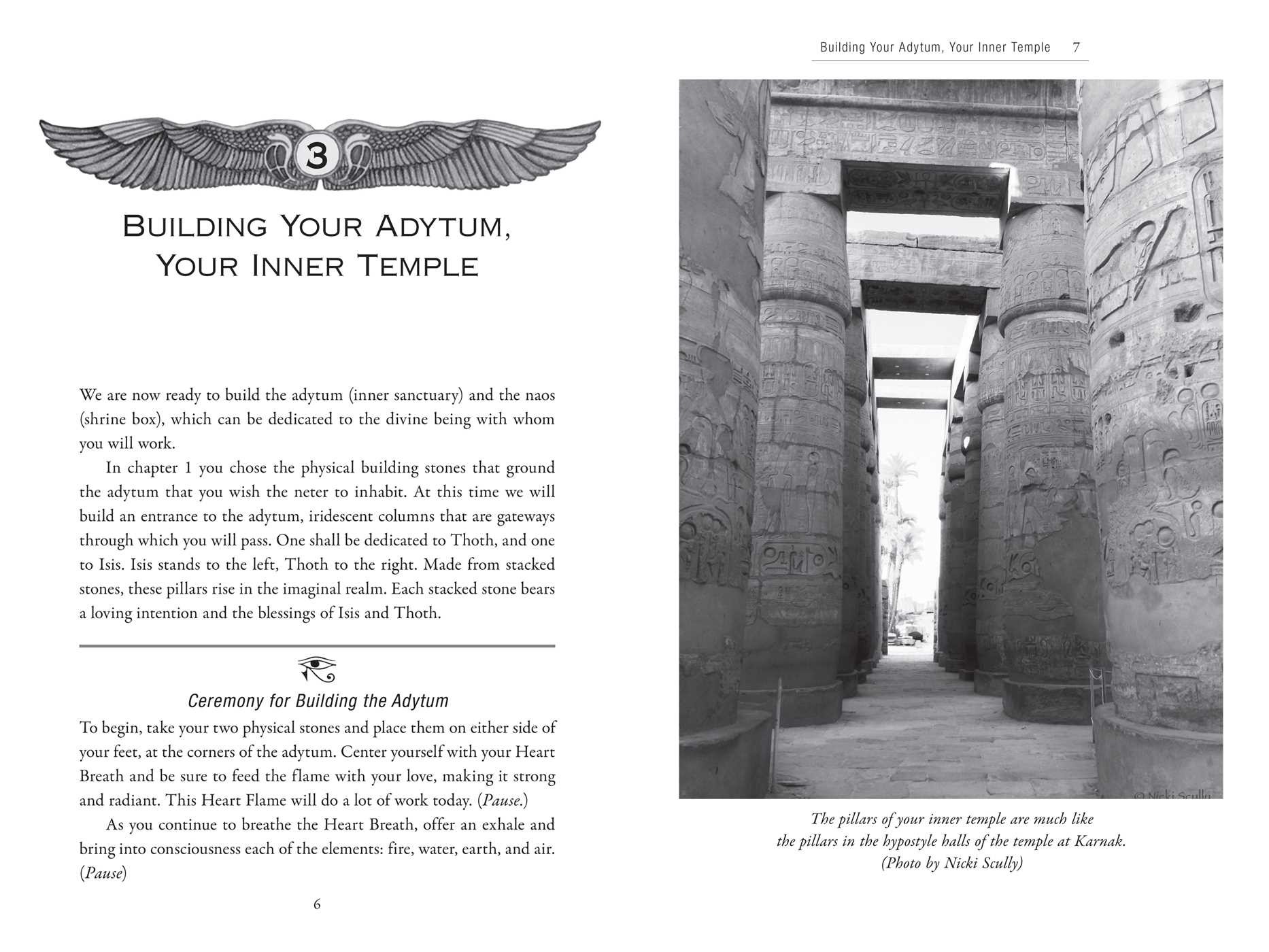 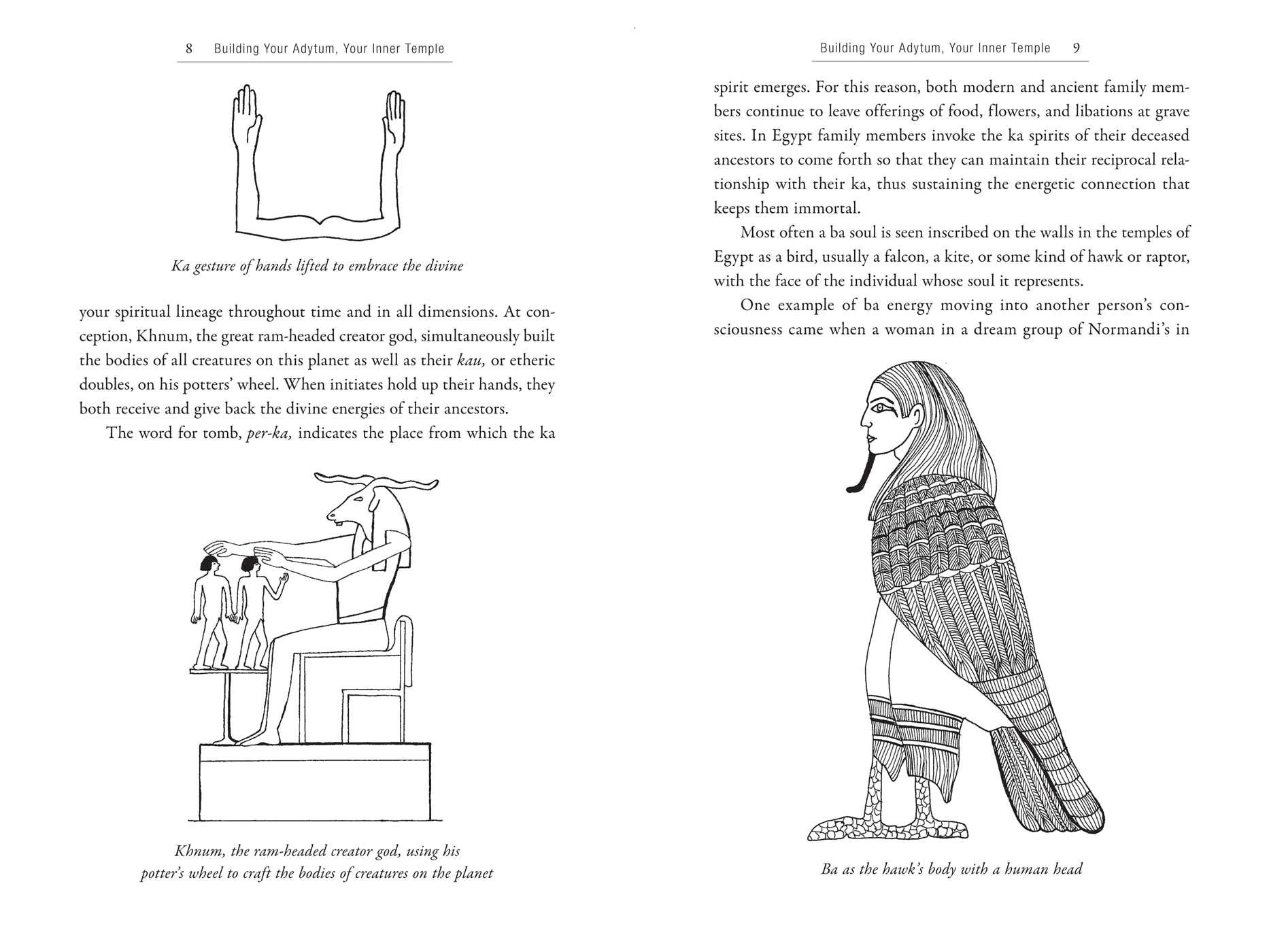 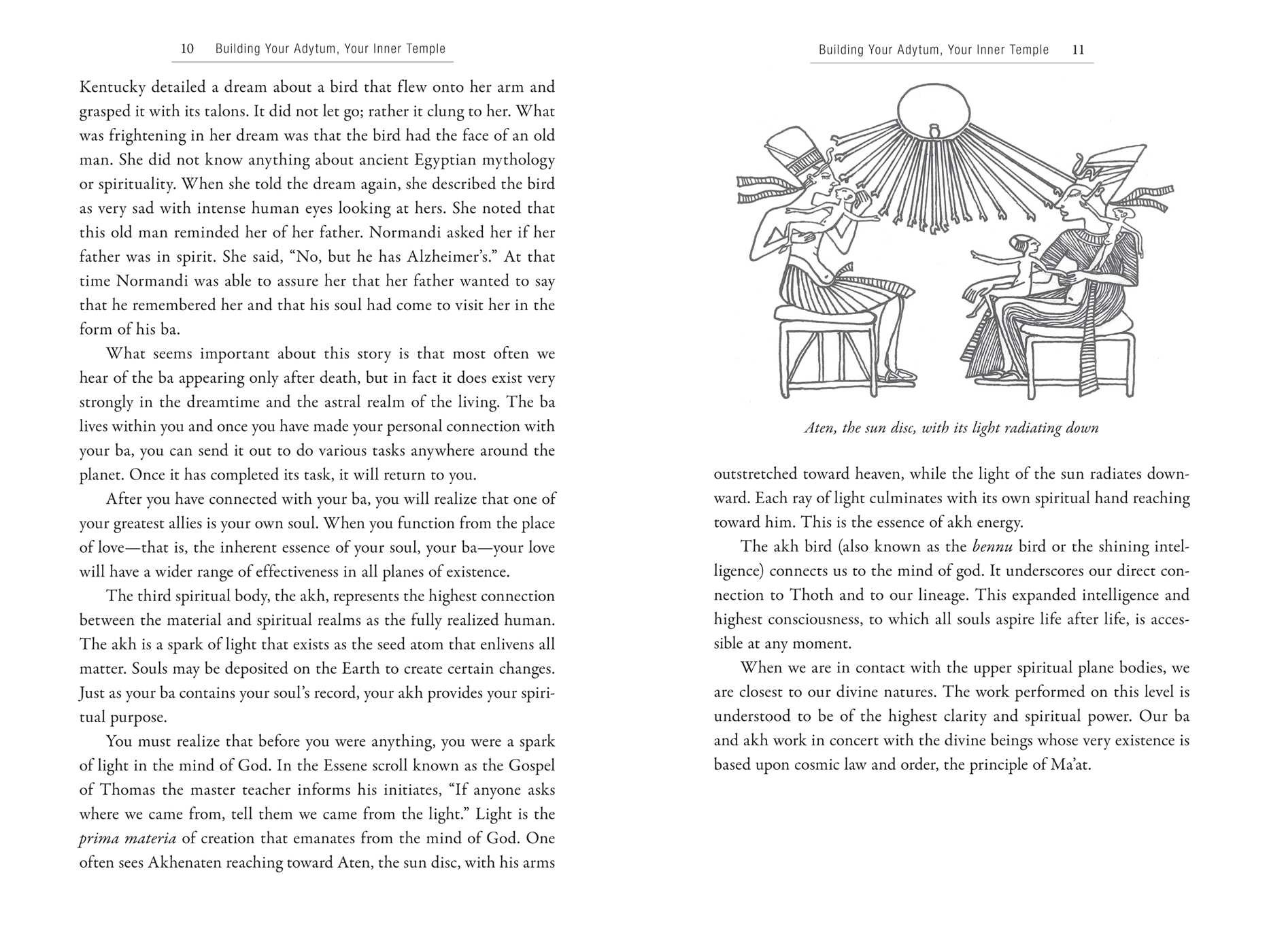 The Union of Isis and Thoth

• Details the initiations for consecrating yourself as a divine vessel

Deep within each of us lives a primal memory of a time when the natural world was recognized as divine and our temples were built from sacred materials enlivened through magic. Temples were not places you visited once a week; they were centers of community, divine work, healing, and wisdom, places where Heaven and Earth meet. This union of Heaven and Earth--the sacred temple--is also a union of Thoth and Isis: the Egyptian god of wisdom and the creative cosmic force and the Egyptian goddess of civilizing knowledge. Their relationship established the celestial teachings on Earth, for Thoth taught Isis all the mysteries and magic she knows and Isis acted as Thoth’s instrument to deliver the teachings in a form humanity could use.

In this initiatic guide to temple building on the spiritual and physical planes, Normandi Ellis and Nicki Scully explain how to create a communal spiritual structure for connecting with the ancient Egyptian pantheon as well as how to consecrate yourself and become a vessel suitable for divine wisdom and a home for your personal gods. The authors detail the construction, shamanic visioning, and ritual consecration of a Moon Temple dedicated to Thoth. They explore teachings that help you develop relationships with the Egyptian neteru and realize your place within the family of the Egyptian pantheon. They guide you as you create your inner heart temple, the adytum, a safe place in which to receive guidance and access your higher spiritual bodies and oracular gifts. They provide shamanic journeys and initiations on ascension, shamanic death and renewal, soul retrieval and healing, multidimensional realities, and more.

By creating a sacred temple within and without, we each can take part in the union of Isis and Thoth and restore the magic of the Egyptian mysteries to our time.

DEVELOPING YOUR RELATIONSHIP WITH YOUR KA, YOUR BA, AND YOUR AKH

The ancient Egyptians identified at least nine divine bodies operating on four planes of existence--physical, astral/emotional, mental, and spiritual. Three of these divine bodies live in the spiritual plane. The ka is the animating spirit. The ba is the soul and contains the record in akasha--your heart is your record in this lifetime and your ba is your record through infinite lifetimes. The akh is the shining intelligence, the god spark within you, which is sometimes identified as the seed atom that returns to the divine after death and after all of your lifetimes are over.

The animating principle, known as the ka, resides in the lower part of the spiritual plane and is the closest spiritual body to the mental and emotional planes. The ka is related to our nature of desire and, like the will, it has the closest proximity to the love energy of the astral and emotional realms. Ka also expresses divine, sacred love--the wanting to be connected with the Other, our divine sacred partner. Its hieroglyph is shown as two arms outstretched and uplifted 90 degrees from the elbows--ancient Egyptian priests or priestesses reach to embrace the divine.

Ka represents our ancestral consciousness, your connection with your spiritual lineage throughout time and in all dimensions. At conception, Khnum, the great ram-headed creator god, simultaneously built the bodies of all creatures on this planet as well as their kau, or etheric doubles, on his potters’ wheel. When initiates hold up their hands, they both receive and give back the divine energies of their ancestors.

The word for tomb, per-ka, indicates the place from which the ka spirit emerges. For this reason, both modern and ancient family members continue to leave offerings of food, flowers, and libations at grave sites. In Egypt family members invoke the ka spirits of their deceased ancestors to come forth so that they can maintain their reciprocal relationship with their ka, thus sustaining the energetic connection that keeps them immortal.

Most often a ba soul is seen inscribed on the walls in the temples of Egypt as a bird, usually a falcon, a kite, or some kind of hawk or raptor, with the face of the individual whose soul it represents.

One example of ba energy moving into another person’s consciousness came when a woman in a dream group of Normandi’s in Kentucky detailed a dream about a bird that flew onto her arm and grasped it with its talons. It did not let go; rather it clung to her. What was frightening in her dream was that the bird had the face of an old man. She did not know anything about ancient Egyptian mythology or spirituality. When she told the dream again, she described the bird as very sad with intense human eyes looking at hers. She noted that this old man reminded her of her father. Normandi asked her if her father was in spirit. She said, “No, but he has Alzheimer’s.” At that time Normandi was able to assure her that her father wanted to say that he remembered her and that his soul had come to visit her in the form of his ba.

What seems important about this story is that most often we hear of the ba appearing only after death, but in fact it does exist very strongly in the dreamtime and the astral realm of the living. The ba lives within you and once you have made your personal connection with your ba, you can send it out to do various tasks anywhere around the planet. Once it has completed its task, it will return to you.

After you have connected with your ba, you will realize that one of your greatest allies is your own soul. When you function from the place of love--that is, the inherent essence of your soul, your ba--your love will have a wider range of effectiveness in all planes of existence.

The third spiritual body, the akh, represents the highest connection between the material and spiritual realms as the fully realized human. The akh is a spark of light that exists as the seed atom that enlivens all matter. Souls may be deposited on the Earth to create certain changes. Just as your ba contains your soul’s record, your akh provides your spiritual purpose.

You must realize that before you were anything, you were a spark of light in the mind of God. In the Essene scroll known as the Gospel of Thomas the master teacher informs his initiates, “If anyone asks where we came from, tell them we came from the light.” Light is the prima materia of creation that emanates from the mind of God. One often sees Akhenaten reaching toward Aten, the sun disc, with his arms outstretched toward heaven, while the light of the sun radiates downward. Each ray of light culminates with its own spiritual hand reaching toward him. This is the essence of akh energy.

The akh bird (also known as the bennu bird or the shining intelligence) connects us to the mind of god. It underscores our direct connection to Thoth and to our lineage. This expanded intelligence and highest consciousness, to which all souls aspire life after life, is accessible at any moment.

When we are in contact with the upper spiritual plane bodies, we are closest to our divine natures. The work performed on this level is understood to be of the highest clarity and spiritual power. Our ba and akh work in concert with the divine beings whose very existence is based upon cosmic law and order, the principle of Ma’at.
Normandi Ellis

Nicki Scully has been a healer and teacher of shamanism and the Egyptian mysteries since 1978. She lectures worldwide and specializes in spiritual tours to sacred sites in Egypt, Peru, and other countries. She is the author of Power Animal Meditations and Alchemical Healing, and the co-author of Shamanic Mysteries of Egypt and The Anubis Oracle. Nicki lives in Eugene, Oregon, where she maintains a comprehensive healing and shamanic consulting practice.

“The Union of Isis and Thoth is a fine distillation of Nicki Scully and Normandi Ellis’s work defining the essential characteristics of the neteru, and they share their guidance for building temples and the invocation of these divine beings. This excellent book with beautiful photos and illustrations offers their shared path for housing the divine in the world, amazingly in a pure and simple text that comes from very high places.”

– Barbara Hand Clow, author of The Mind Chronicles: A Visionary Guide into Past Lives and Revelations

“This is a fabulous book--a treasure. It begins with cautionary information about metaphysical practice and proceeds through a sweeping overview of the gods of ancient Egypt, revealing that the origin of the ancient word for a divine being--neter--and the root of the Coptic word netjer, meaning “god,” etymologically become the English word nature. This book is a rich resource destined to become a classic.”

“Postmodern Priestesses Nicki and Normandi have crafted a book for temple builders of the future, to teach us the ancient mysteries and open the gates of wisdom embedded in the living gods and goddesses of Egypt. Thoth and Isis have offered this vision to these authors, who share with our desecrated world a vision of planetary renewal.”

– Alex Grey and Allyson Grey, artists and coauthors of Net of Being

“The authors have written a rich shamanic tapestry that eloquently weaves the sacred threads of Thoth’s wisdom into the high magic and love of Queen Isis. Enter and explore the initiations presented in this book through the union of these two amazing energies.”

“. . . an invitation to forge a deep, meaningful, and direct relationship with the pantheon and your inner sanctuary from a place of equanimity: eye-to-eye, peer-to-peer, divine-to-divine. Perhaps your best friend, divine partner, and staunch ally resides within these pages. Once you are reunited your life is forever changed.

– Danielle Rama Hoffman, author of The Temples of Light and The Council of Light

“Normandi and Nicki’s combined and deep wisdom of ancient Egypt and its pantheon weave a portal of initiation through magic and ritual. This book is a must have!”

– Kathryn Ravenwood, author of How to Create Sacred Water

“The Union of Isis and Thoth is a unique gift to all those questing for the essence of mystical Egypt. It is the essential guide of practical wisdom delivered from the mind of Thoth to a waiting world.”

– Naomi Ozaniec, author of The Breath of Isis

“The Union of Isis and Thoth is yet another gem which causes me to stop every few pages and think with delighted envy: I didn’t know that!”

– Alan Richardson, author of The Inner Guide to Egypt

The Union of Isis and Thoth