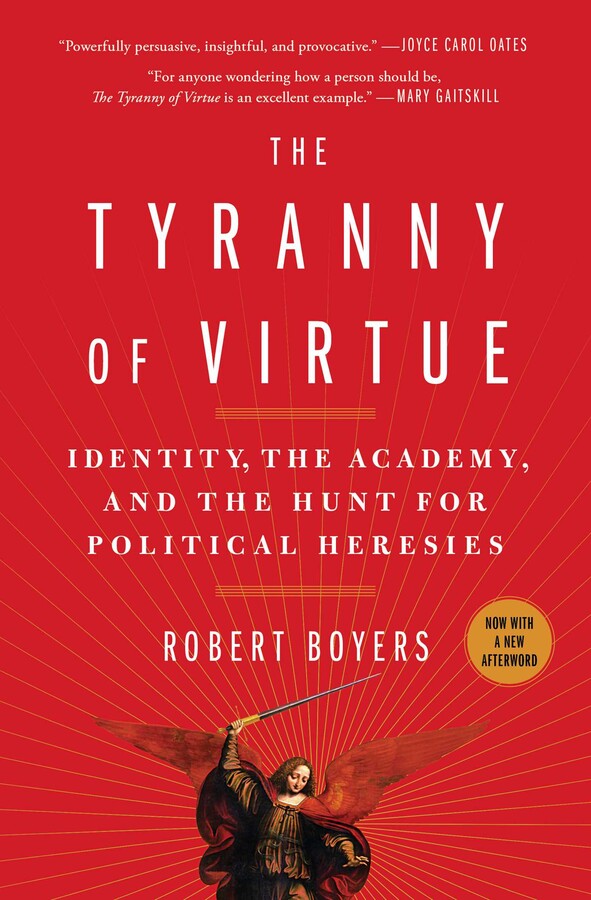 The Tyranny of Virtue

Identity, the Academy, and the Hunt for Political Heresies

From public intellectual and professor Robert Boyers, “a powerfully persuasive, insightful, and provocative prose that mixes erudition and first-hand reportage” (Joyce Carol Oates) addressing recent developments in American culture and arguing for the tolerance of difference that is at the heart of the liberal tradition.

Written from the perspective of a liberal intellectual who has spent a lifetime as a writer, editor, and college professor, The Tyranny of Virtue is a “courageous, unsparing, and nuanced to a rare degree” (Mary Gaitskill) insider’s look at shifts in American culture—most especially in the American academy—that so many people find alarming.

Part memoir and part polemic, Boyers’s collection of essays laments the erosion of standard liberal values, and covers such subjects as tolerance, identity, privilege, appropriation, diversity, and ableism that have turned academic life into a minefield. Why, Robert Boyers asks, are a great many liberals, people who should know better, invested in the drawing up of enemies lists and driven by the conviction that on critical issues no dispute may be tolerated? In stories, anecdotes, and character profiles, a public intellectual and longtime professor takes on those in his own progressive cohort who labor in the grip of a poisonous and illiberal fundamentalism. The end result is a finely tuned work of cultural intervention from the front lines.

Robert Boyers is editor of Salmagundi, professor of English at Skidmore College, and director of the New York State Summer Writers Institute. He is the author of ten previous books and the editor of a dozen others. He writes often for such magazines as Harper’s, The New Republic, The Nation, Yale Review, and Granta.

“An intellectually stimulating series of essays about the decline of civility and academic freedom.” —Albany Times Union

“Boyers has given us a crucial lesson in the sweeping anti-liberalism of present-day leftists.” —Tablet

“A rousing call for speech on college campuses that is truly free, addressing uncomfortable issues while allowing room for dissent…Coming from a clearly liberal point of view, Boyers nonetheless courts controversy—and is bound to get it—with some of his tenets, such as the thought that identity politics as such evinces ‘a fear of the uncertainties and hard choices that come with modernity and the need to think.’ A nuanced argument of interest to those who worry that nuanced arguments are no longer possible in quad or classroom.” —Kirkus Reviews

“Robert Boyers writes in the great tradition of Saul Bellow, Irving Howe and Susan Sontag: a powerfully persuasive, insightful and provocative prose that mixes erudition and first-hand reportage, combativeness and sympathy, moral vehemence and humor. From his vantage point as longtime editor of the preeminent journal Salmagundi, Boyers has been in close contact with every seismic shift in literary, intellectual, artistic and academic quarters in recent decades, and for those of us who may require guidance, here is our guide.” —Joyce Carol Oates

“Robert Boyers’s voice is a bracing one: courageous, unsparing, and nuanced to a rare degree. In this book, he patiently and wittily speaks sanity to the towering forces of cultural craziness, and he actually respects everyone—well, nearly everyone—whom he subjects to his rigorous critique. For anyone wondering how a person should be, The Tyranny of Virtue is an excellent example.” —Mary Gaitskill

“This is a moment in which many robust voices claim attention for groups and causes that have been undervalued historically—a splendid moment for a culture that, at its best, places great value on reform that tends toward justice. In our universities, the debates it encourages have sometimes become vitriolic and judgmental. Robert Boyers has given us a reminder of the complexity of the issues at stake and the urgency of preventing a humane impulse from being overwhelmed by passions unworthy of it.” —Marilynne Robinson

“Robert Boyers has written a probing meditation on his experiences within the left-liberal cultural bubble, including his own college, where he has been a formidable presence for decades. He trenchantly challenges assumptions, slogans and nostrums of those excessively certain and proud of their ‘wokeness.’ I found The Tyranny of Virtue to be instructive and inspiring.” —Randall Kennedy, Michael Klein Professor of Law, Harvard University


“This book offers a sustained argument against the virtue-signaling and apologetics that have become a major force in the arts and academic life. Boyers's assessment is all the more persuasive for the way it draws on his own long experience as a teacher, critic, and commentator on American culture.” —David Bromwich, Yale University

“The Tyranny of Virtue: think of virtue as an ideal, and yet also as a tyranny, and all that does not belong to that realm must cower and disappear. We live in a time when true virtue seems to have disappeared, and everything that is not virtuous has taken to wearing virtue as a cloak. Of course I might have begun by saying that I know of almost no one but Robert Boyers who can succinctly penetrate and dispose of this masquerade of a period we are living in. So much that is wrong and dark he reveals in extraordinarily limpid prose, showing us that what is out there will not be made right and clear without the courage to name the human mess we have made. The life of the academy should remain sacred, and this book makes a splendid case for it, for the proposition that virtue is permanently hinged to the ideal of truth—that many-hued and illusive reality. The admirable and triumphant accomplishment of this work is that it adds to the ongoingness of our common enterprise. The Tyranny of Virtue is a wonderful book, and I shall always have it nearby.” —Jamaica Kincaid

“For decades Robert Boyers has been a bracing voice of sanity amid the ideological fashions of left and right. The Tyranny of Virtue is vintage Boyers—a brave and timely challenge to the suffocating moral orthodoxy that has come to envelop academic life and much of our broader public discourse as well. No one who cares about the future of independent thought can afford to ignore this book.” —Jackson Lears, Board of Governors Distinguished Professor of History, Rutgers University

The Tyranny of Virtue

Identity, the Academy, and the Hunt for Political Heresies