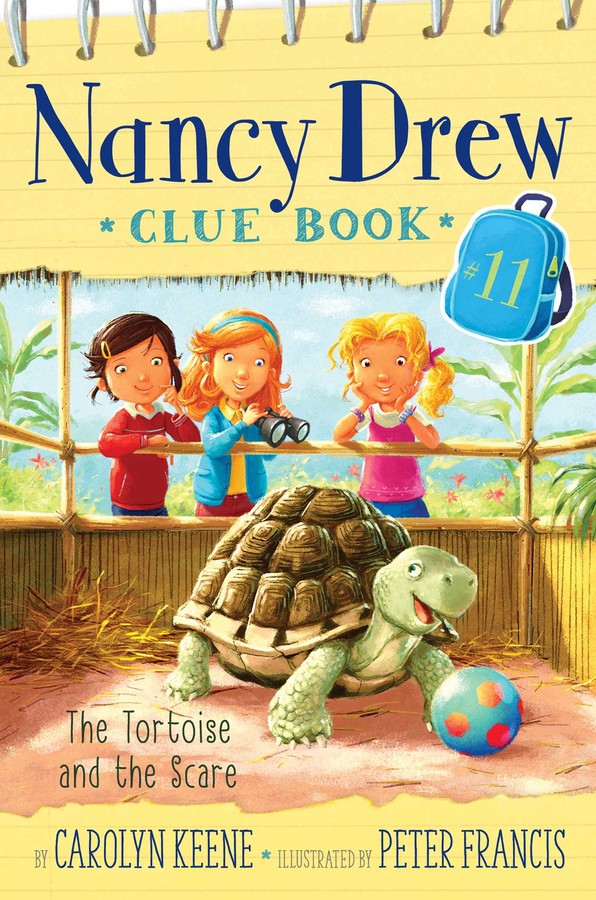 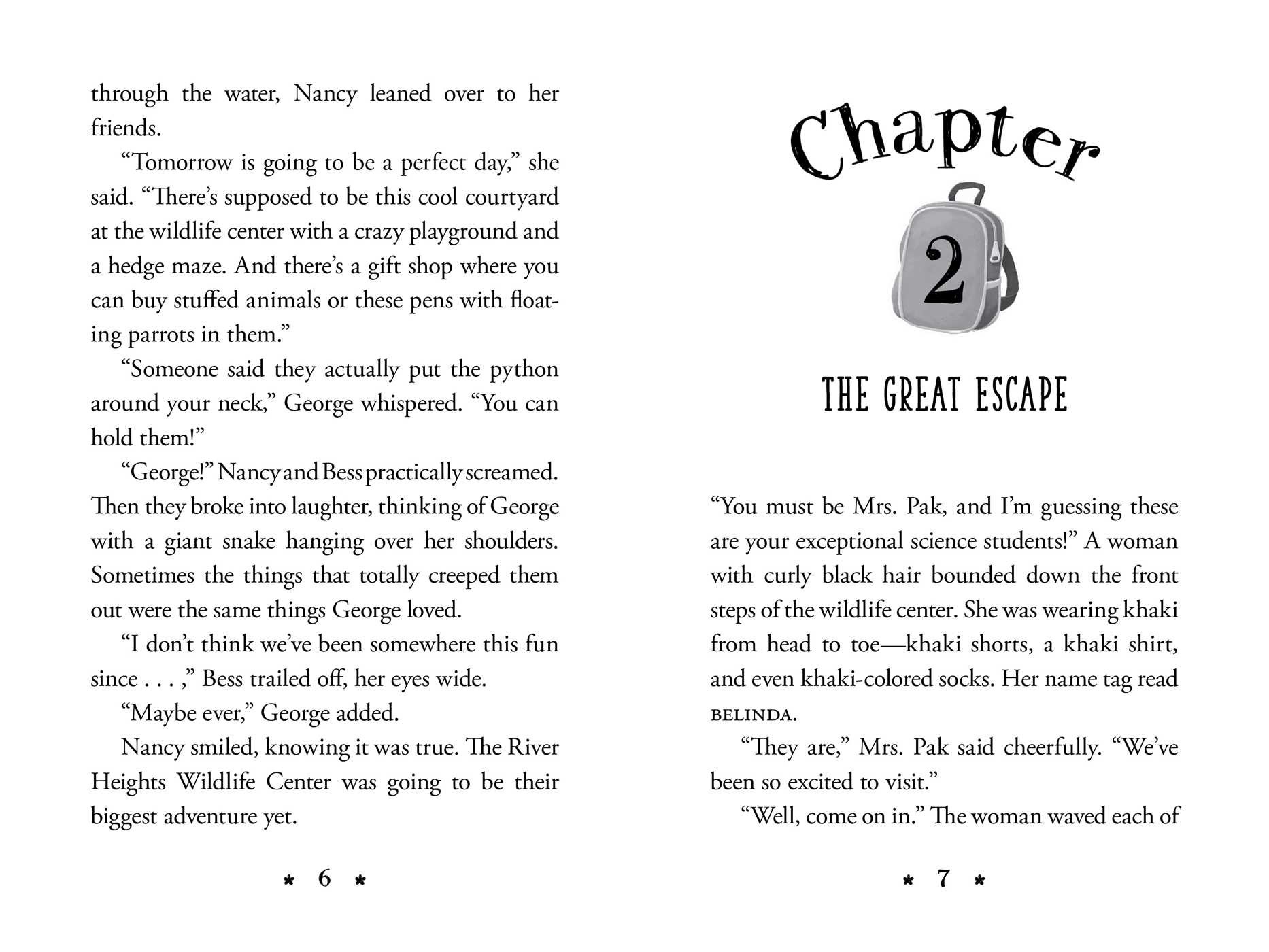 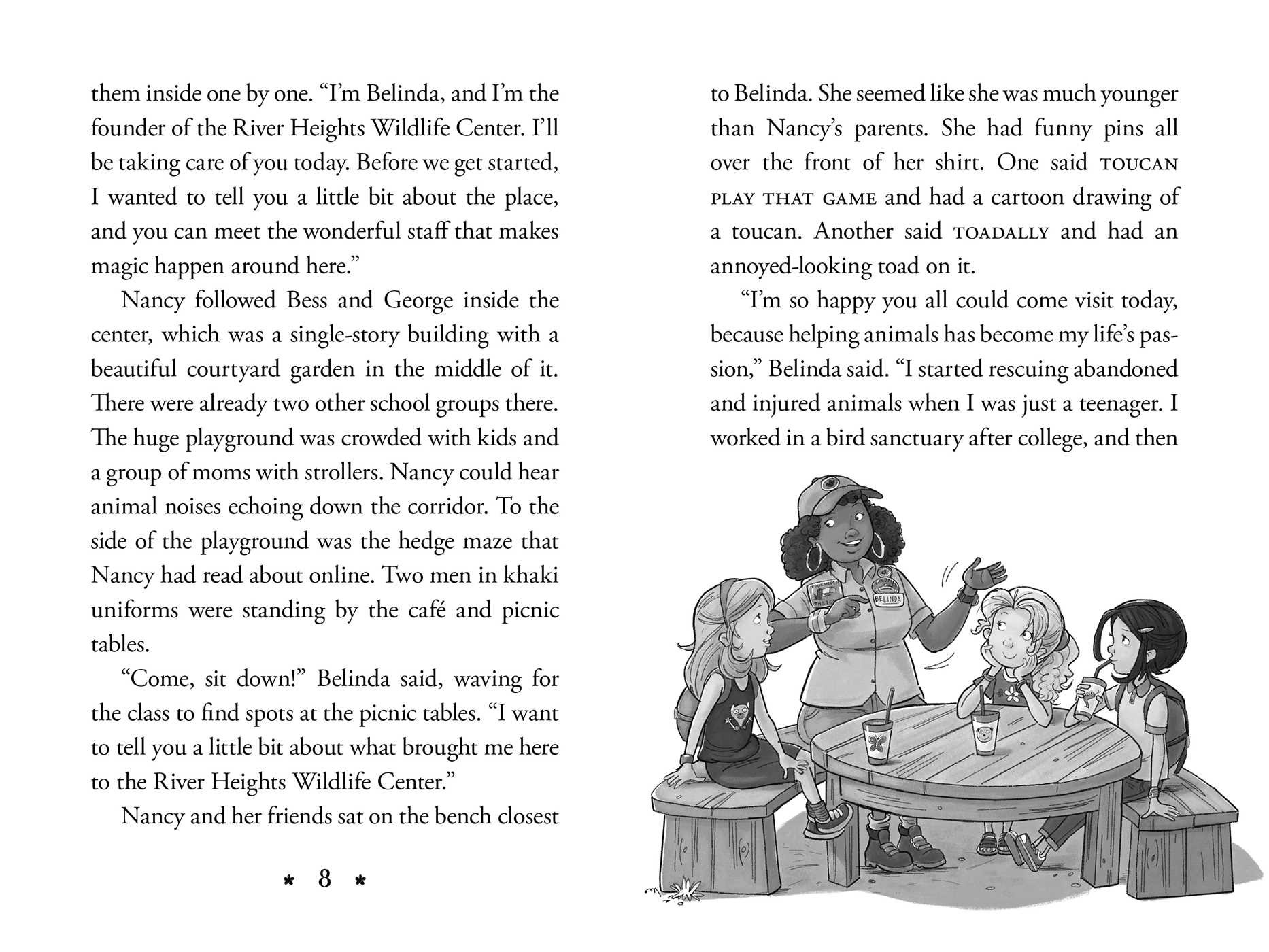 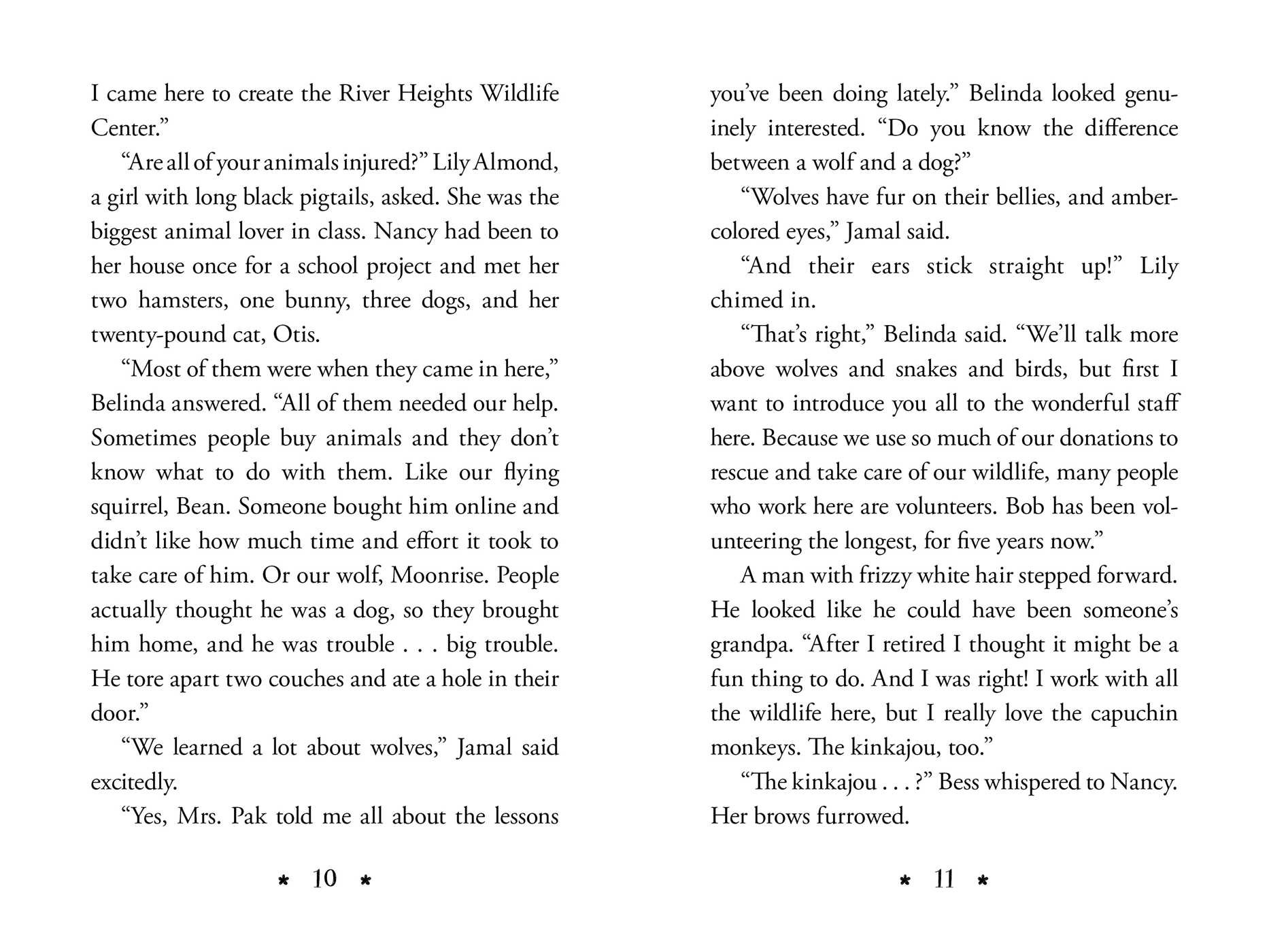 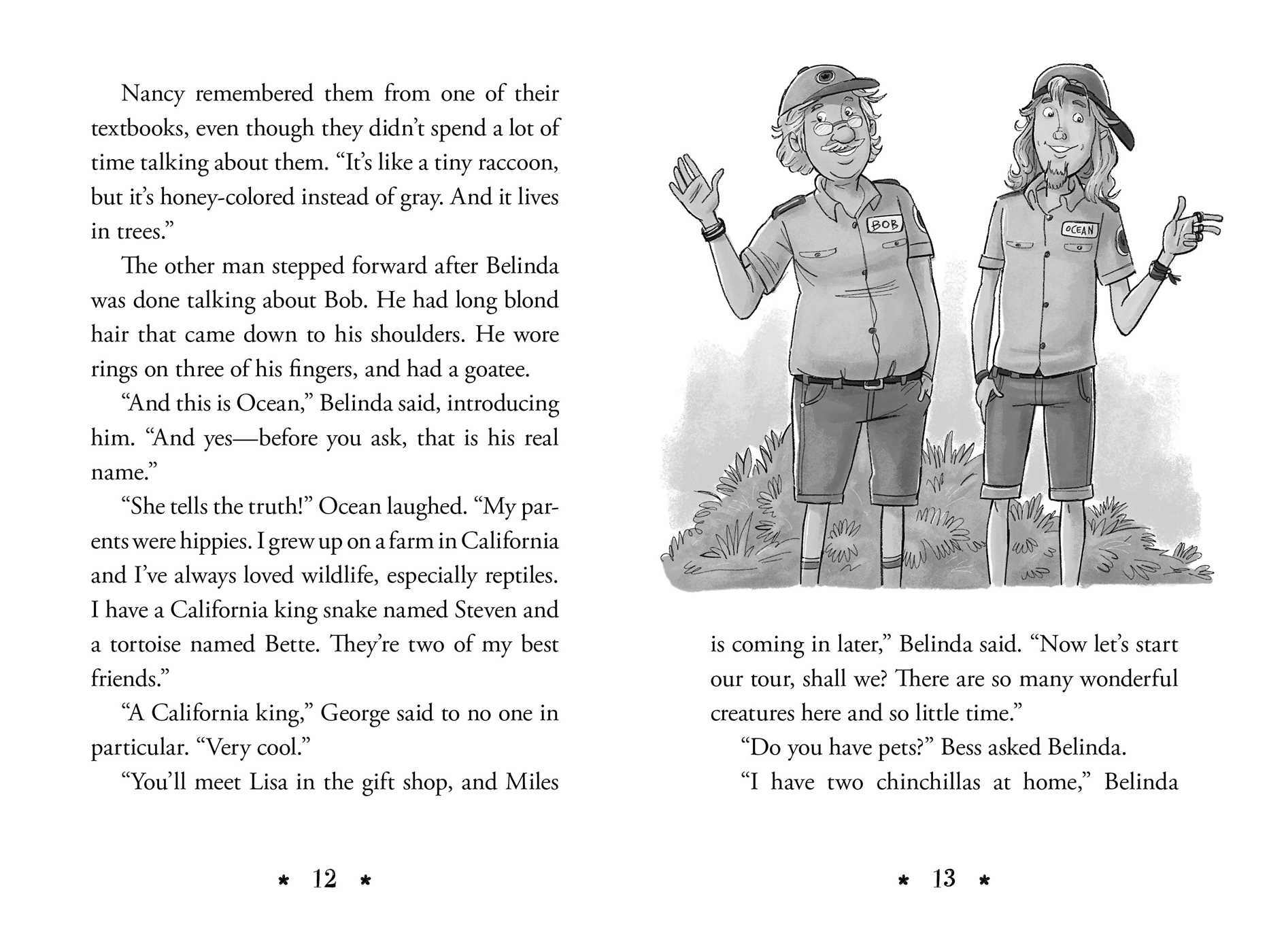 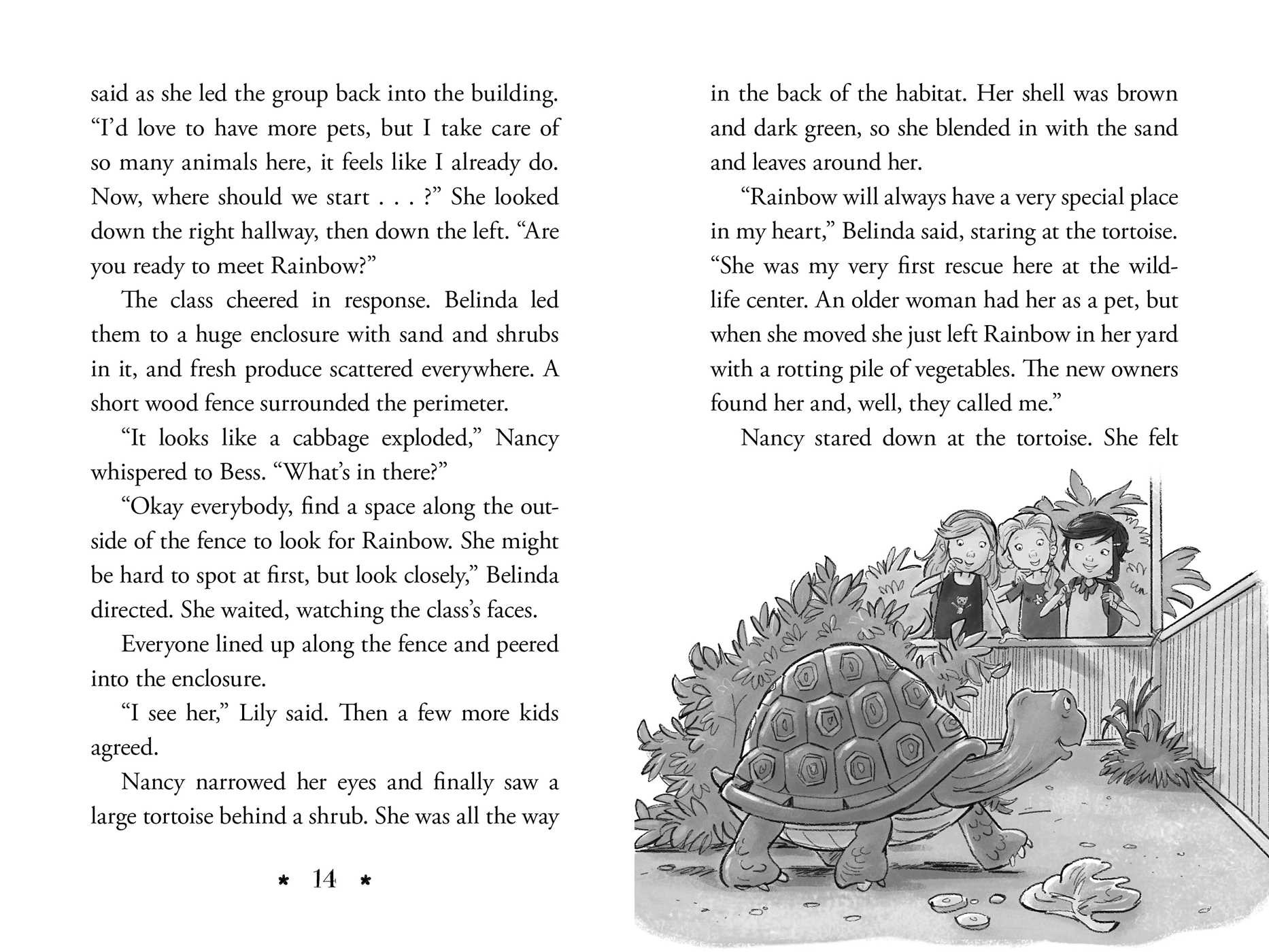 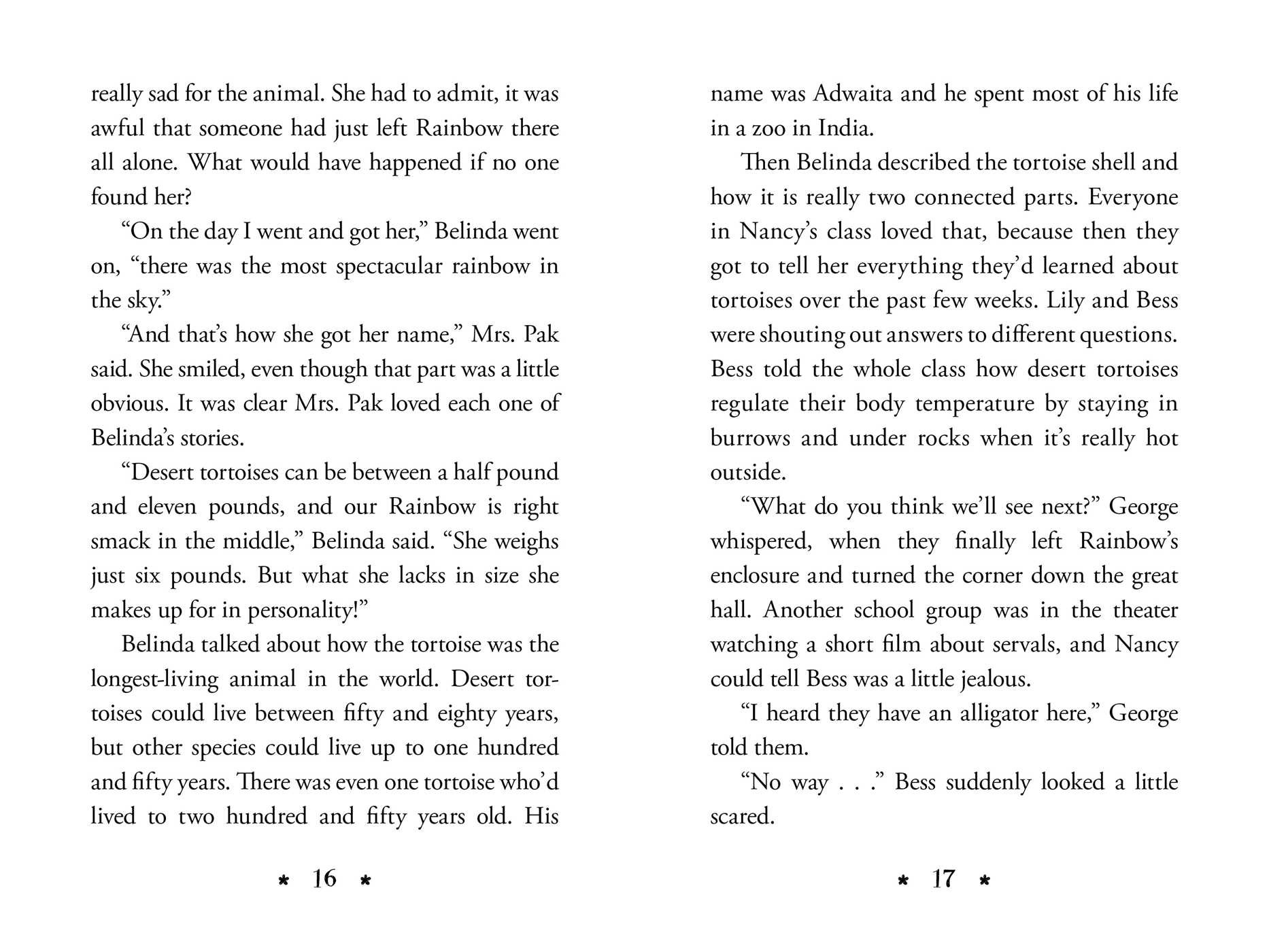 Help Nancy and her friends find a missing tortoise in the eleventh book in the interactive Nancy Drew Clue Book mystery series.

Nancy, Bess, and George have been looking forward to their school trip to the Wildlife Refuge for weeks. They’ve been studying all the different animals they’ll see there—pygmy hedgehogs, scarlet macaws, and ball pythons. Nancy is most excited to see the sixty-year-old tortoise—that hard-shelled creature is older than her dad. But when her class reaches the enclosure they find out the tortoise is on the loose!

Nancy and her friends are on the case. Can they save the day before the class trip is over? Or will this sneaky reptile outsmart them all?

GUESS WHO?
Nancy Drew stood in front of her science class with an index card in her hand. Her best friends, George Fayne and Bess Marvin, were sitting in the back row. She stared down at the card, wanting to give everyone a clue that was good, but not too good. She didn’t want them to guess the answer right away.

“Hmmm . . . ,” Mrs. Pak, their teacher, murmured. She glanced around the classroom. “What could she be? Does anyone have any ideas?”

Jamal Jones’s hand shot up in the air. He always got straight As and had guessed the last two correct answers. Nancy held her breath, wondering if he’d get it right.

“Are you a porcupine?” he asked.

“Very good!” Mrs. Pak said, taking the card from Nancy. It had HEDGEHOG written on it in block letters. “This class is going to be so prepared for our field trip tomorrow. I’m sure all the guides at the River Heights Wildlife Center will be impressed.”

Nancy took her seat next to her friends. Bess’s long blond hair was pulled back in a ponytail as she leaned over her book. The World’s Most Exotic Animals was open to the page about servals. The spotted cat looked like a cheetah with bunny ears. “Their ears are so cute,” Bess said, pointing to the pictures. “They’re so much bigger than their heads! I hope we get to see one tomorrow.”

“I want to see a ball python,” George said.

“Those are terrifying!” Bess whispered.

George and Bess were cousins, but they couldn’t have been more different. George had short brown hair and brown eyes, was athletic, and was not easily scared. Bess always feared the worst would happen, and Nancy had only ever seen her play sports in gym class. Together the three of them made up the Clue Crew. They worked together solving mysteries around River Heights. They’d even recovered a telescope that had been stolen from a local museum.

Harry and Liam McCormick went to the front of the class. They were identical twins, with orange hair and freckles, and they liked doing presentations together whenever Mrs. Pak would let them. They’d just moved to River Heights in September, and were obsessed with Antonio Elefano, the biggest prankster in Nancy’s grade. The twins were constantly doing things to try to impress him. Just the week before they’d climbed thirty feet up a tree trying to get his attention.

“And we have giant wings!” Harry added.

Nancy thought they might be parrots . . . maybe sun conures, but that seemed too obvious. They’d been studying so many exotic animals that she sometimes got them mixed up. Was it possible they were scarlet macaws?

Mrs. Pak leaned over their shoulders to get a better view of their cards. “I think you’re red and blue. And maybe a few other colors too.”

“That’s right! She’s right,” Liam said. He seemed excited that someone had guessed the correct answer, even though they were a bit confused about which bird the macaw was.

Mrs. Pak moved on to the next lesson, pulling up a video of a three-toed sloth on the screen in front of the class. The furry creature was swimming. As the rest of the class watched it paddle through the water, Nancy leaned over to her friends.

“Tomorrow is going to be a perfect day,” she said. “There’s supposed to be this cool courtyard at the wildlife center with a crazy playground and a hedge maze. And there’s a gift shop where you can buy stuffed animals or these pens with floating parrots in them.”

“Someone said they actually put the python around your neck,” George whispered. “You can hold them!”

“George!” Nancy and Bess practically screamed. Then they broke into laughter, thinking of George with a giant snake hanging over her shoulders. Sometimes the things that totally creeped them out were the same things George loved.

Nancy smiled, knowing it was true. The River Heights Wildlife Center was going to be their biggest adventure yet.
Carolyn Keene