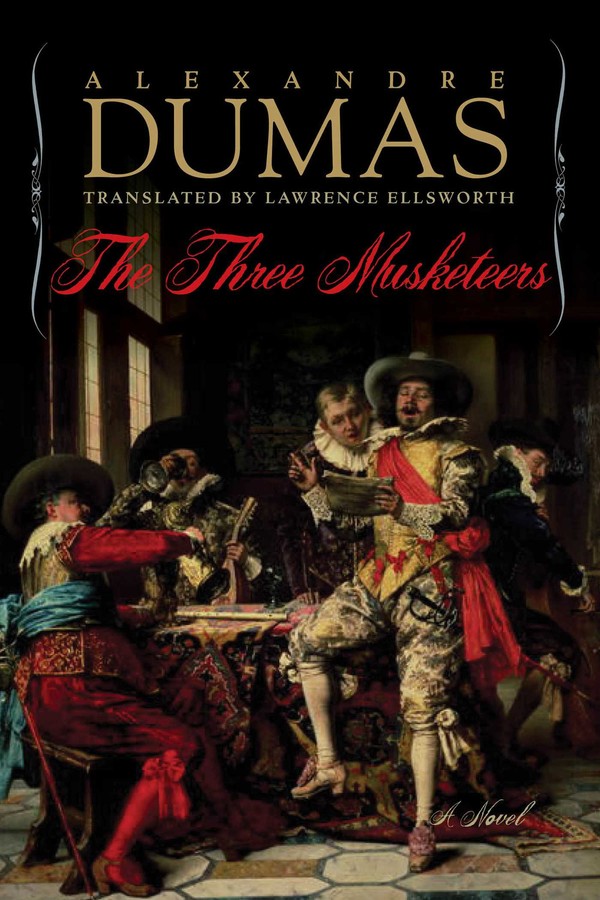 A new and vibrant translation of Alexandre Dumas’s renowned The Three Musketeers, following the adventures of the valiant d’Artagnan and his three loyal comrades.

In March of 1844, the Parisian paper The Century began publishing installments of a new tale by France’s favorite author, Alexandre Dumas. Week after week readers thrilled to the adventures of the brave and clever d’Artagnan and his loyal comrades. Collected for book publication at the end of that year, and quickly translated into a dozen languages, The Three Musketeers was a worldwide sensation—nowhere more so than in the United States. Citizens of the brash new republic recognized kindred spirits in the bold musketeers, and the book and its sequels found an eager American readership.

The novel's fast-moving story is set in the royal court of Louis XIII, where the swaggering King’s Musketeers square off against their rivals: the crimson-clad Guards of the dreaded Cardinal Richelieu. The Red Duke rules France with an iron hand in the name of King Louis—and of Queen Anne, who dares a secret love affair with France’s enemy, England’s Duke of Buckingham. Into this royal intrigue leaps the brash d’Artagnan, a young swordsman from the provinces determined to find fame and fortune in Paris. Bold and clever, in no time the youth finds himself up to his Gascon neck in adventure, while earning the enduring friendship of the greatest comrades in literature, the Three Musketeers: noble Athos, sly Aramis, and the giant, good-hearted Porthos.

Now from Lawrence Ellsworth, acclaimed translator of The Red Sphinx, comes a new rendition of The Three Musketeers for a new century, one that captures anew the excitement, humor, and spirit of Alexandre Dumas’s greatest novel of historical adventure. Whether you’re meeting the musketeers for the first time or discovering them all over again, it’s all for one, one for all, in this timeless tale of honor and glory, the flash of dark eyes, and the clash of bright steel.

One of the most famous French writers of the nineteenth century, Alexandre Dumas (1802 - 1870) first achieved success in the literary world a playwright, before turning his hand to writing novels. In two years from 1844 to 1845, he published two enormous books, The Count of Monte Cristo and The Three Musketeers. Both novels have sold millions of copies worldwide.

"The classic French epic in a new translation by Lawrence Ellsworth brings freshness to the story of d'Artagnan and his pals."

"When Dumas wrote The Three Musketeers in 1844 he upped Shakespeare’s ante. The author’s mold-breaking use of short paragraphs and abundant dialogue provided a template for the modern page-turner. Though Dumas was accused of playing fast and loose with history, he actually brought it thrillingly alive. A rip-snorting new translation of The Three Musketeers by the American Lawrence Ellsworth captures all the excitement and flair of Dumas’s great historical adventure that spawned several sequels and numerous films, TV series and cartoons. Ellsworth does a wonderful job of communicating the energy, humor and warmth of Dumas’s work. Ellsworth’s snappier approach, which included putting back all the racier scenes elided from the Victorian translations, suits Dumas much better. It also helps to put an end to the lie, persistent in the English-speaking world, that Dumas’s brand of popular fiction does not deserve the same attention as more ‘serious’ works."

"Lawrence Ellsworth provides a vibrant, modern-day English translation of the classic high adventure. Ellsworth’s rendition is addictively readable in this lengthy but fast-paced novel. He masterfully captures Dumas’s distinctive voice and humor. Highly recommended for readers of literary classics who have not yet read or would like to reacquaint themselves with the tale."

"The test of a translator is his capacity to capture this characteristic interplay of the heroic and the ribald; the sincere and the ironic; the vanished past and the approaching present. And at this task Ellsworth succeeds, giving us a Three Musketeers with more clarity, energy, and simplicity than any previous English edition."

– Michael Dirda, The Washington Post [praise for 'The Red Sphinx']

– Bookreporter [praise for 'The Red Sphinx']

– Newsday [praise for 'The Red Sphinx']

– The Spectator [praise for 'The Red Sphinx']