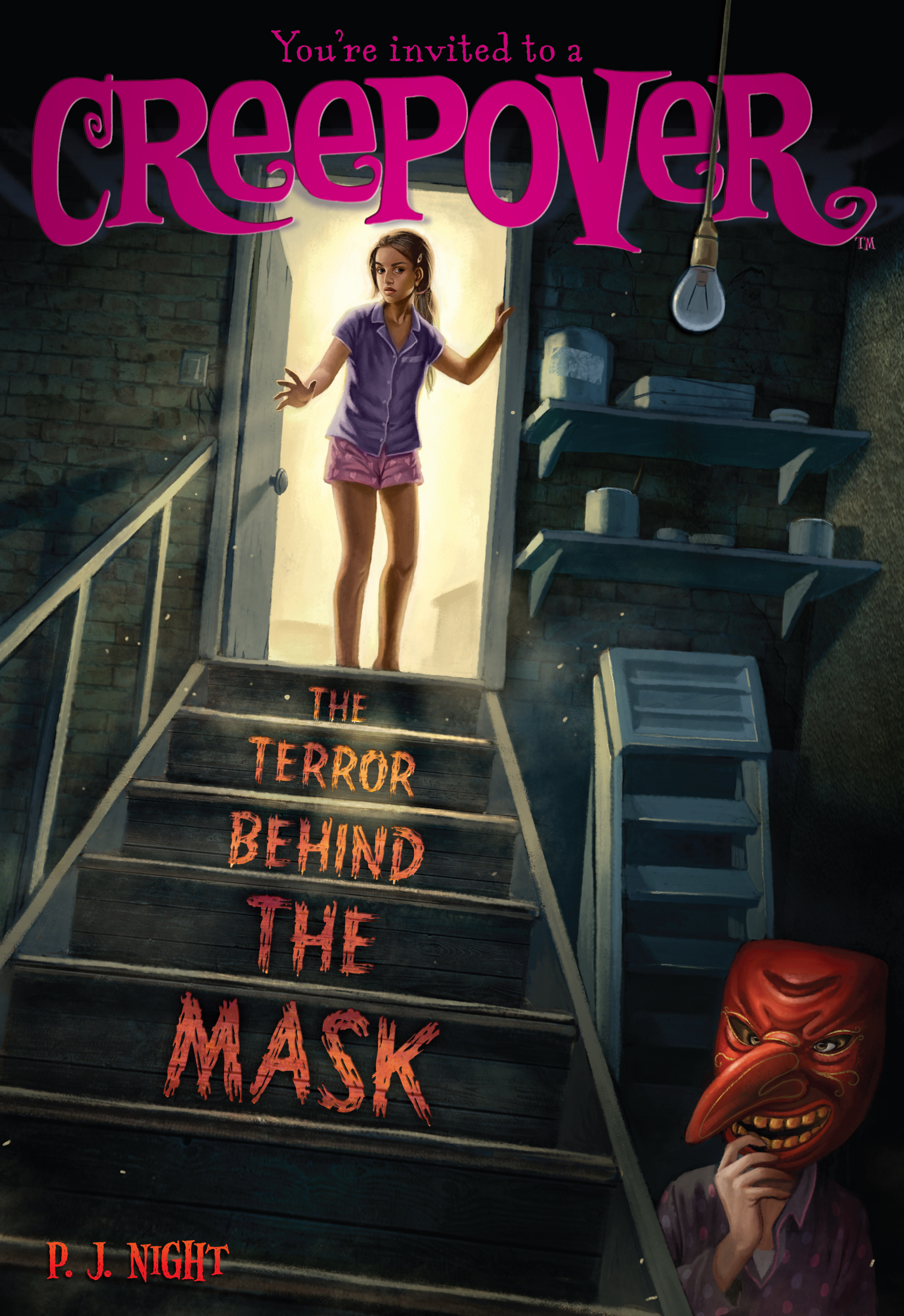 Book #19 of You're Invited to a Creepover
By P.J. Night
LIST PRICE $6.99
PRICE MAY VARY BY RETAILER

Jasmine is forced to face her darkest fears in this Creepover tale that’s as scary as they come.

Jasmine Porter has always let her fear of the dark get the better of her: she even checks every nook and cranny of her room each night for monsters before she hides under the covers! But Jasmine’s imagination kicks into overdrive when her dad brings home a creepy mask—a mask that looks eerily like the face of the boogeyman haunting Jasmine’s dreams. Though her dad insists the mask is supposed to protect their home from evil spirits, Jasmine won’t rest easy until the mask is gone. But Jasmine soon finds out that the mask may be harder to get rid of than she thought…

This nightmare in disguise is rated a Level 5 on the Creep-o-Meter.

CHAPTER 1
Jasmine Porter always read before she went to sleep. It felt great to slip into bed, turn on the reading light clipped to her headboard, and open a book. It was like entering another world. And she usually fell asleep while reading.

Tonight Jasmine would start a book her dad had bought her on one of their father-daughter book-buying sprees before he went off on his latest trip. They always went to the same neighborhood bookstore, Bookworm, and her dad always said the same thing: “Pick out what you want, Jazzy-Jas.” And he really meant it. Jasmine could choose twenty books, and her dad wouldn’t even blink in surprise. He’d just smile, take them from her, and plop them down at the register.

“Really?” she’d sometimes say when she’d gone on a particularly large binge. “I can have all of them?”

And her dad would always say the same thing: “You can’t put a price on the pleasure that reading gives.”

It was true: they both loved to read. Sometimes they would sit on the couch for hours, both immersed in their own books, and not say a word to each other. The only sound in the room would be of pages turning.

That’s what it was like as Jasmine lay in bed reading. It was just her breathing and the sound of pages turning. The bulb of her reading lamp was so bright, she could actually feel its heat. After a few chapters, Jasmine’s eyes grew heavy, her grip on the book started to loosen, and she knew she should close it, turn off the reading light, put the book on the night table, and face the truth: she would finally have to give in to sleep.

Jasmine reached up and turned off the reading light, but instead of going dark, the room was still bright. Jasmine looked up and noticed that the overhead light was on. She got out of bed and walked, bleary-eyed, toward the light switch next to the door, and flicked the switch.

But as the room went dark, Jasmine quickly realized that she should have turned the reading light back on first, because now it was pitch-black, unless you counted the glow-in-the-dark stars on her ceiling, which didn’t exactly provide any real light (though they were pretty). Where was the little night-light that was plugged into the outlet? It usually gave off a soft glow and made Jasmine feel so much better.

As much as she hated to admit it, Jasmine was afraid of the dark. And she really liked that night-light. It was made of orange and yellow glass and shaped like a baby owl, and she’d had it since she herself was a baby. The bulb must’ve burned out, she thought. The last few times that had happened, she’d called out to her dad, who had come in and changed the bulb. But her dad was still away on his trip, and Jasmine was alone in the house with her grandmother, who Jasmine knew would already be asleep.

Jasmine sighed. It seemed like her dad was always gone at the wrong times.

Sometimes he would try to talk to her about his having to travel a lot for work, as if he was fishing for her real feelings about him being gone. “Did you have any dreams while I was away?” he’d ask, as if that would give him some clue to her deepest thoughts. Or he’d say, “When I was your age, I hated it when my mom went back to work and left me home alone a lot.” It was like he expected Jasmine to immediately join the conversation and confess her true feelings.

And Jasmine just wasn’t going to do that. She also wasn’t going to tell her dad how scared she still was of the dark, or about the little rituals she believed kept her safe at night. Every night for the past three years, she’d whispered, “You’re okay,” to herself three times and made sure the covers were pulled up all the way to her ears before she would close her eyes. She also wasn’t going to tell him she thought that maybe he’d traveled the world enough, and that maybe it was time to stay put and be a real parent, like, full time, no joke.

So whenever her dad tried to start a conversation like this, Jasmine pretended she was someone else—someone who didn’t care. And she’d shrug or roll her eyes.

Now Jasmine stood in the dark at the light switch. She could turn the overhead light back on, walk to the bed, flick on the reading light, and then come back. But that would set her back from falling asleep. No, she could do this.

Jasmine tried to let her eyes adjust to the dark so she could see a tiny bit, just so she could make her way back to bed without tripping and falling on her face. And, of course, so that she could keep a close eye on the closet as she passed. Because the idea of something being in that closet—something that was going to get her—was so real to Jasmine that she feared it deep in her bones.

“The bogeyman” didn’t quite do it justice, nor did “monster.” Both names sounded childish compared to what she actually feared.

When she was younger, she’d made her dad check the closet before she’d gone to sleep. He’d always reassure her that there was no such thing as the bogeyman, and that there were no monsters in the closet. Jasmine’s dad always humored her by opening the closet door and looking around first. But now that she was older, she was embarrassed to ask him to check. Still, she was too afraid to check herself. Instead she settled for staring at the closet door, making sure it didn’t creak open and release some horrible, evil . . . thing.

The basic outline of the room was starting to reveal itself to Jasmine’s tired, anxious eyes. The light creeping in from the hallway was helping a bit. Jasmine knew it was time to walk past the closet and jump quickly into bed. She tentatively crept forward, still afraid of tripping in her messy room. One foot in front of the other, one foot in front of the other, she chanted in her head. She kept her eyes on that closet door, as if by sheer will she could keep it closed and keep herself safe from whatever was inside.

It felt like forever, but Jasmine finally made it back to her bed. And there she was, standing at the side of it, ready to crawl under the covers to safety, when suddenly she felt something grab her around her left ankle.

A cold, slimy grip. It felt like something between a hand and a claw. And then it began to pull, hard.

Jasmine struggled desperately to keep her balance. The thing wanted to drag her under the bed. And no matter how hard she tried, Jasmine couldn’t keep her footing. She lost her balance and fell to the floor.

Then the actual dragging began. A force much stronger than she thought possible was pulling her. It was like the time she had been swimming in the ocean and gotten sucked under the waves. But that time her dad had been there to pull her back to safety. Jasmine focused on that memory, rather than the feel of the rough carpet burning her leg as she was dragged under the bed.
P.J. Night

Book #19 of You're Invited to a Creepover
By P.J. Night
LIST PRICE $6.99
PRICE MAY VARY BY RETAILER