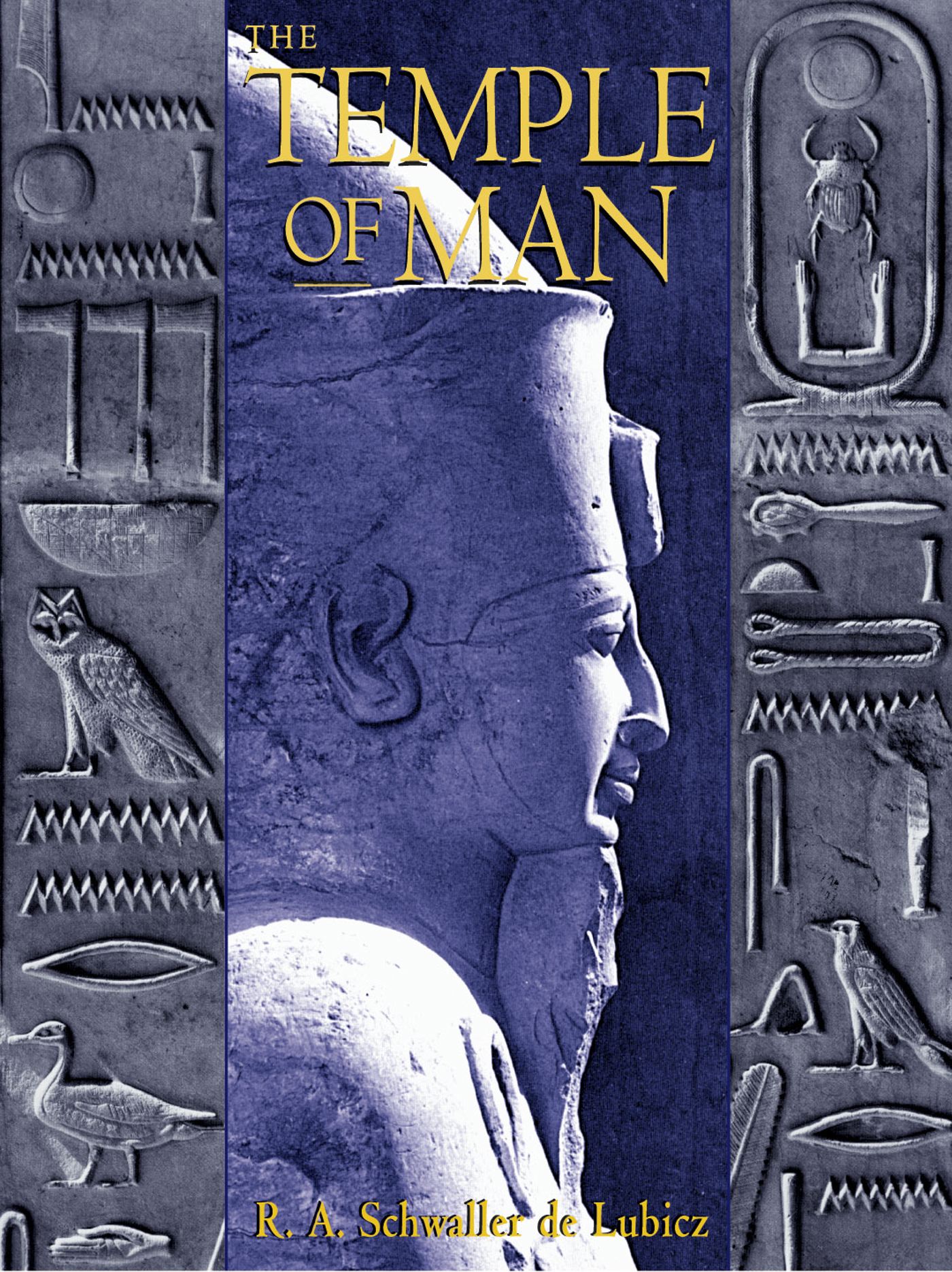 The Temple of Man

Two 544-page volumes, cloth with slipcase The monumental Temple of Man represents the most important breakthrough in our understanding of Ancient Egypt since the discovery of the Rosetta stone. This exhaustive and authoritative study reveals the depths of the mathematical, medical, and metaphysical sophistication of Ancient Egypt. Schwaller de Lubicz's stone-by-stone survey of the temple of Amun-Mut-Khonsu at Luxor allows us to step into the mentality of Ancient Egypt and experience the Egyptian way of thinking within the context of their own worldview.

His study finds the temple to be an eloquent expression and summary--an architectural encyclopedia--of what the Egyptians knew of humanity and the universe. Through a reading of the temple's measures and proportions, its axes and orientations, and the symbolism and placement of its bas-reliefs, along with the accompanying studies of related medical and mathematical papyri, Schwaller de Lubicz demonstrates how advanced the civilization of Ancient Egypt was, a civilization that possessed exalted knowledge and achievements both materially and spiritually. In so doing, Schwaller de Lubicz effectively demonstrates that Ancient Egypt, not Greece, is at the base of Western science, civilization, and culture.

To understand the temple of Luxor, twelve years of field work were undertaken with the utmost exactitude by Schwaller de Lubicz in collaboration with French archaeologist Clement Robichon and the respected Egyptologist Alexandre Varille. From this work were produced over 1000 pages of text and proofs of the sacred geometry of the temple and 400 illustrations and photographs that make up The Temple of Man.

The Temple of Man is a monument to inspired insight, conscientious scholarship, and exacting archaeological groundwork that represents a major contribution to humanity's perennial search for self-knowledge and the prehistoric origins of its culture and science.

R. A. Schwaller de Lubicz (1887-1961) was one of the most important philosophers, mathematicians, and Egyptologists of this century. His elucidation of the temple at Luxor and his presentation of the Egyptian understanding of a special quality of innate consciousness form a bridge that links the sacred science of the Ancients to its rediscovery in our own time.

"This astonishing and monumental book helps us understand not only the greatness of Egypt, but the depths of the human soul as well. The work of Schwaller de Lubicz stands in our time as an unsurpassed blending of objective scholarship and philosophical vision."

– Jacob Needleman, author of Time and the Soul

"In The Temple of Man, renowned Egyptologist R.A. Schwaller De Lubicz offers an exhaustive study of the temple of Amun-Mut-Khonsu at Luxor. In over 1000 pages of text, illustrations and photographs, De Lubicz demonstrates the powerful spiritual and philosophical heritage of ancient Egyptian civilization."

"Schwaller's grand synthesis reveals, once and for all, the full extent and significance of the knowledge of Ancient Egypt."

"Le Temple de l'homme by Schwaller de Lubicz is an absolute must for all who are interested in the search for the truth about Ancient Egypt and its pivotal place in the unfolding of the cosmic drama and the human quest for immortality and spiritual perfection. For years we have all waited for an English translation. Here it is at last!"

– Robert G. Bauval, author of The Orion Mystery: Unlocking the Secrets of the Pyramids and Message of

"Schwaller's text demands that it not be just read, but that it be 'thought along with.' His scientific writings contain poetic and spiritual insights that touch the soul . . . because true science, as he conceives it, is capable of generating those insights--indeed, it demands that they be generated."

"In my view, The Temple of Man is the most important work of scholarship of this century. R. A. Schwaller de Lubicz finally proves the existence of the legendary 'sacred science' of the Ancients and systematically demonstrates its modus operandi. It was this great science--based upon an intimate and exact knowledge of cosmic principles--that fused art, religion, science, and philosophy into one coherent whole and sustained Ancient Egypt for three thousand years."

"Schwaller de Lubicz's great work, grounded in a remarkable insight into the science and philosophy of the ancient world, opens the way to a complete reappraisal of Egyptian civilization, revolutionizing our view of history."

– John Michell, author of The New View Over Atlantis

– William Irwin Thompson, author of At the Edge of History

"Schwaller de Lubicz is one of the major thinkers of the twentieth century--his greatness, alas, still not fully recognized, although readers who know Sacred Science and Symbol and the Symbolic treasure them as masterpieces. But his greatest and most massive achievement is The Temple of Man, surely one of the seminal works of the last half century. The news that it is to be finally published in English will delight all admirers of this highly original philosopher."

– Colin Wilson, author of The Outsider and The Philosopher's Stone

"The Temple of Man will live, like statues of Ramesses, long after we and those who follow us have joined the pharaohs. This is an eternal work, just as Egypt is eternal. To enter the minds of the Ancient Egyptians through this door will lead any reader into an enchanted realm where form and structure have life, where stone breathes and perspires, and where the palpitating heart of traditional wisdom still throbs amongst the sands."

– Robert Temple, translator of The Complete Fables of Aesop and author of The Sirius Mystery

"The Temple of Man is a monumental product of intellect, scholarship, and exploration into the 'pharaonic mentality' of Ancient Egypt. There is no work more ambitious in seeking to render accessible the consciousness of a time and place remote from and extremely alien to our own. The sufficiently careful and aware reader can actually take on enough of the mindset being described as to arrive at states of consciousness unlike any experienced by contemporary people. It then becomes possible to glimpse that extraordinary 'mentality' which cast in Egypt a spell of luminous fascination still potent after thousands of years."

– Robert Masters, author of The Way to Awaken and The Goddess Sekhmet

"An important addition to the library of any serious metaphysician."

"The Temple of Man is an accomplishment of truly Herculean proportions. Nothing written in the past two hundred years, with the exeption of only one book, even approaches it in enormity of purpose, scope, subject matter, majasty and profundity. . . . One needs to learn to read this book and then immerse oneself in it. Were on to do this, and assuming diligence, sincerity, determination and some ingenuity by the reader, the outcome toward which all human life is aimed, the evolution of consciousness is assured."

"An impressive, beautifully realized presentation that deserves consideration, discussion and debate. For those of you with interest in alternative approaches to ancient Egypt, The Temple of Man will be and important addition to your library."

"As complete an insight into the mind of pharaonic Egypt as will be found on paper. . . . Coming to the worldview from our mindset places serious damands on the reader. But, this book is both dizzying and transporting, offering the possibility of immersion in another world, cleansing the mind and clarifying the extent and the limitations of our own mental tools for grasping our world."

The Temple of Man

More books from this author: R. A. Schwaller de Lubicz