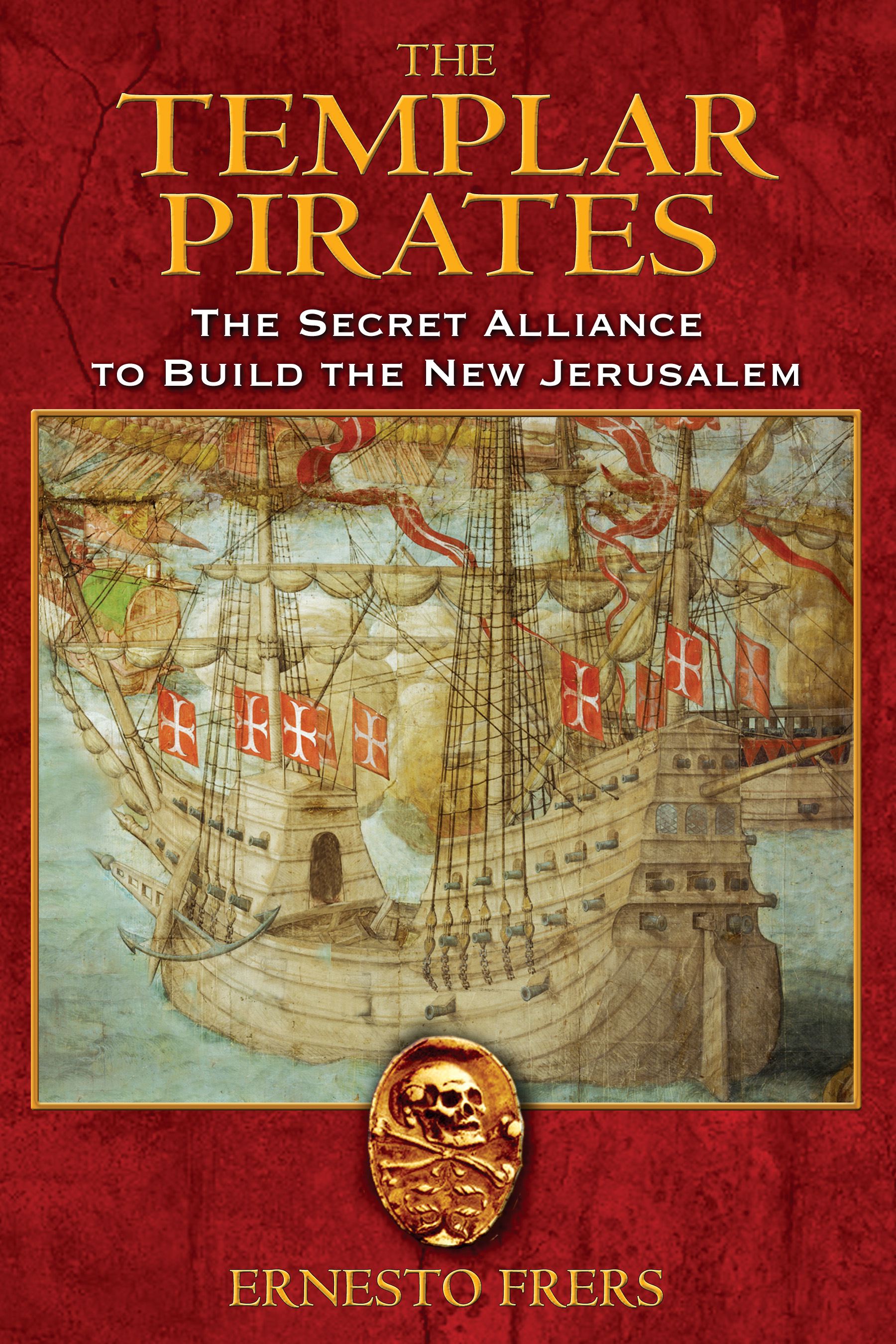 The Secret Alliance to Build the New Jerusalem

By Ernesto Frers
LIST PRICE $14.95
PRICE MAY VARY BY RETAILER

• Reveals the Templars’ secret objective to establish a new universal order based on spirituality, wisdom, and individualism--the New Jerusalem

• Examines the secret history of the Templars’ influence in international politics

When the Vatican condemned the Order of the Temple in 1312, many of those who escaped took to the sea. Their immediate objective was to take revenge on the Church. Recent discoveries confirm that ships of the Templar fleet that went missing at La Rochelle later reappeared--first in the Mediterranean and later in the Atlantic and Caribbean--to menace the Church’s maritime commerce. These Templar vessels often flew the famed Jolly Roger, which took its name from King Roger II of Sicily, a famed Templar who, during a public spat with the Pope in 1127, was the first to fly this flag.

Opportunistic buccaneers were quick to see that vast wealth could be gained in pursuing the Templars’ harassment of the Pope’s interests on the high seas, and they spread a reign of terror across the shipping lanes of the New World. Some unaffiliated pirates, in admiration of the Templar egalitarian ideals, even formed their own secret societies, and together with the Templars were part of the ferment that gave rise to independence movements in France and the New World and contributed to the growth of Freemasonry.

The Templar Pirates is the story of the birth and actual conduct of piracy on the seas of the New World and of the influence the Templars had on their constituents, and, by their wealth, on the governments of nations old and new.

from Chapter 3--THE TEMPLE AND THE PIRATES

The Secret Presence of the Temple

What role did the Templars play in this great golden age of piracy? Did they infiltrate the ranks of these cruel and vicious pirates and become their leaders? What motives are attributed to them by those who claim there was a close relationship between the Order of the Temple and the most famous bandits of the sea? The answers to these questions must be sought in the distant past, combining certain mysterious connections with historical accounts, seafaring traditions, chronicles, and recently discovered ancient maps and documents.

Christian esotericism, opportunely resurrected by various authors of recent best sellers, revolves around the recurring theme of a possible marriage between Jesus and Mary Magdalene. After the death of Christ, Joseph of Arimathea allegedly took the young widow, who was pregnant, to the region south of Gaul where the Cathars later emerged, supposedly as followers of the true Christianity that had come from the Holy Land. A few centuries after the suppression of the Cathars, this part of southern France was the gathering place of the Huguenots, whose ties with the Templars have been related. It is said that Mary Magdalene gave birth in France to a girl named Sarah, whose descendants constituted a sacred lineage whose members remained in secrecy in their castle in the Languedoc, hiding from the agents of the Vatican who sought to exterminate them.

The lineage of Jesus was joined by marriage to the Merovingian dynasty, which reigned in France between the sixth and eighth centuries. Although their adversaries called them “the long-haired kings,” because they refused to cut their hair for reasons of honor (strangely following the Hebrew tradition of Samson), some chroniclers of the time called them the “thaumaturge [miracle-working] kings,” stating that a few drops of their blood would cure any illness. The Merovingian monarchs descended into fratricidal quarrels, and a dynasty of Frankish stewards took power behind the throne, becoming the new guardians of the Great Secret. One of them, Charles Martel, held off the Muslim invaders in the best style of Templar chivalry at the battle of Poitiers in 721. His grandson was the great emperor Charlemagne, who made a pact with the pope to unite all of Europe under the Carolingian Empire. It is said that in order to get the pope to crown him, Charlemagne promised to turn over the Great Secret to him, but some mysterious knights, precursors of the Priory of Sion, managed to rescue the Secret and hide it in a new, secure place. This tradition appears to have been mixed later on with the Arthurian chronicles, as the Saint Grial, the chalice from the Last Supper sought by Sir Galahad, mutated into Sang Real, meaning “royal blood” in French and pronounced similarly (in fact, Galahad was also the name of an ancient region of the Holy Land).

The Order of the Temple, founded in Jerusalem as the military wing of the Priory of Sion, might have been given the mission to protect ancient testimonies to Jesus’ fatherhood, as well as certain God-given knowledge and sacred relics of great spiritual and material value that the knights guarded jealously. The most probable conclusion of experts in the field is that upon the prohibition of the activities of the Temple in 1307, this Great Secret, along with a good part of the enormous fortune accumulated by the Templars, was taken on board the phantom fleet of La Rochelle and carried to the dominion of the Sinclair clan in Scotland, where a generous refuge was offered to the fugitive knights. It is practically proved that a Sinclair (or Saint Clair), Grand Master of the clandestine Temple, joined the Italian sailors Nicolò and Antonio Zeno, completing a transatlantic voyage at the end of the fourteenth century that brought them to the coast of North America. They buried the treasure of the Great Secret in a pit on Oak Island, off the coast of Nova Scotia.

An old marine chronicle claims that when Captain Kidd captured the ship Quedah Merchant (which became his flagship) off India’s Malabar coast in 1698, he received an ancient map from a mysterious passenger, showing the location of a small island with a Templar cross drawn on its interior. The possessor of this document assured Kidd that the cross marked the secret treasure trove of the Templars. From then on, all sufficiently knowledgeable corsairs began searching for “Captain Kidd’s treasure,” beginning with Kidd himself (the story found a literary variation in Robert Louis Stevenson’s famous novel Treasure Island).

The Order of the Temple, which sometimes acted under the guise of Freemasonry, was the primary party interested in acquiring this map, in order to avoid letting the sacred relics fall into strange hands. Through mediators, the Order paid astronomical sums to hire the greatest pirate captains, some of whom had Freemason ancestors or belonged directly to this secret society.
Ernesto Frers

Ernesto Frers is an author specializing in medieval history who has investigated enigmatic and occult subjects for many years. He has published widely in his field, is the author of Templar Pirates and Secret Societies in the Hermetic Code, and also the author of a number of works of fiction. He lives in Spain.

". . . author Ernesto Frers takes us into esoteric history that will leave Johnny Depp fans gasping. He tells us that most pirates were either members of the Order of the Temple--that famed nemesis of the Vatican-or formed their own secret societies while taking revenge on ships sponsored by the Vatican and Catholic nations. And there's so much more. A real page-turner!"

"Fact, fiction or somewhere in between, Templar Pirates is entertaining to say the least."

The Secret Alliance to Build the New Jerusalem

By Ernesto Frers
LIST PRICE $14.95
PRICE MAY VARY BY RETAILER